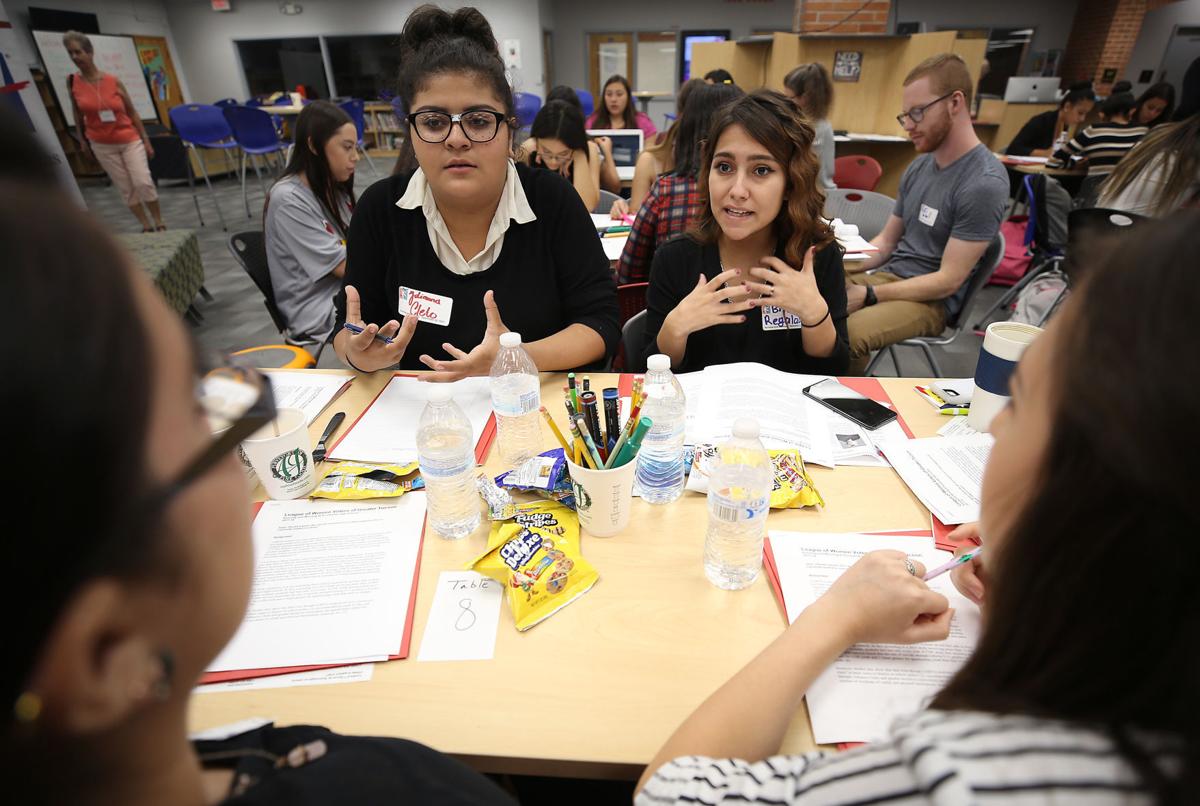 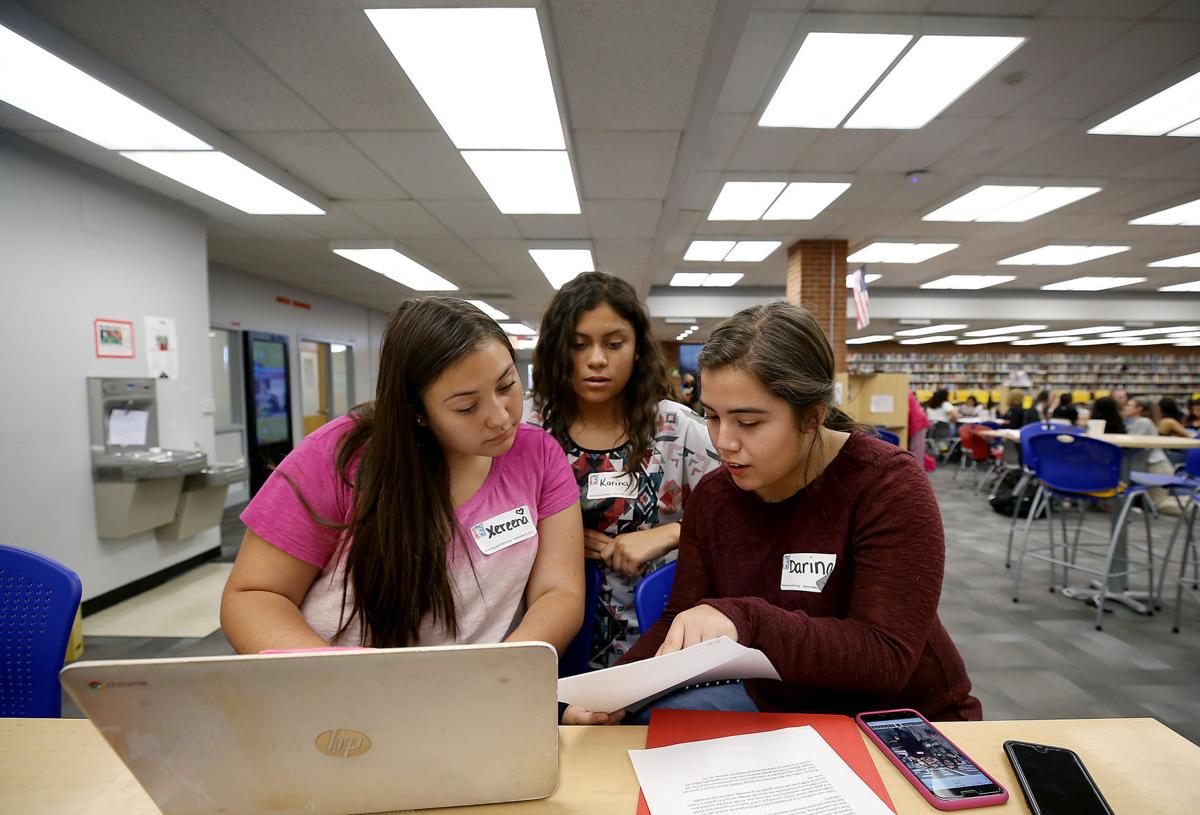 From left to right, Xereena Fisch, 14, Karina Cruz, 14 and Darina Rodriguez, 14, work on a powerpoint presentation about rights for lesbian, gay, bisexual and transgender people. 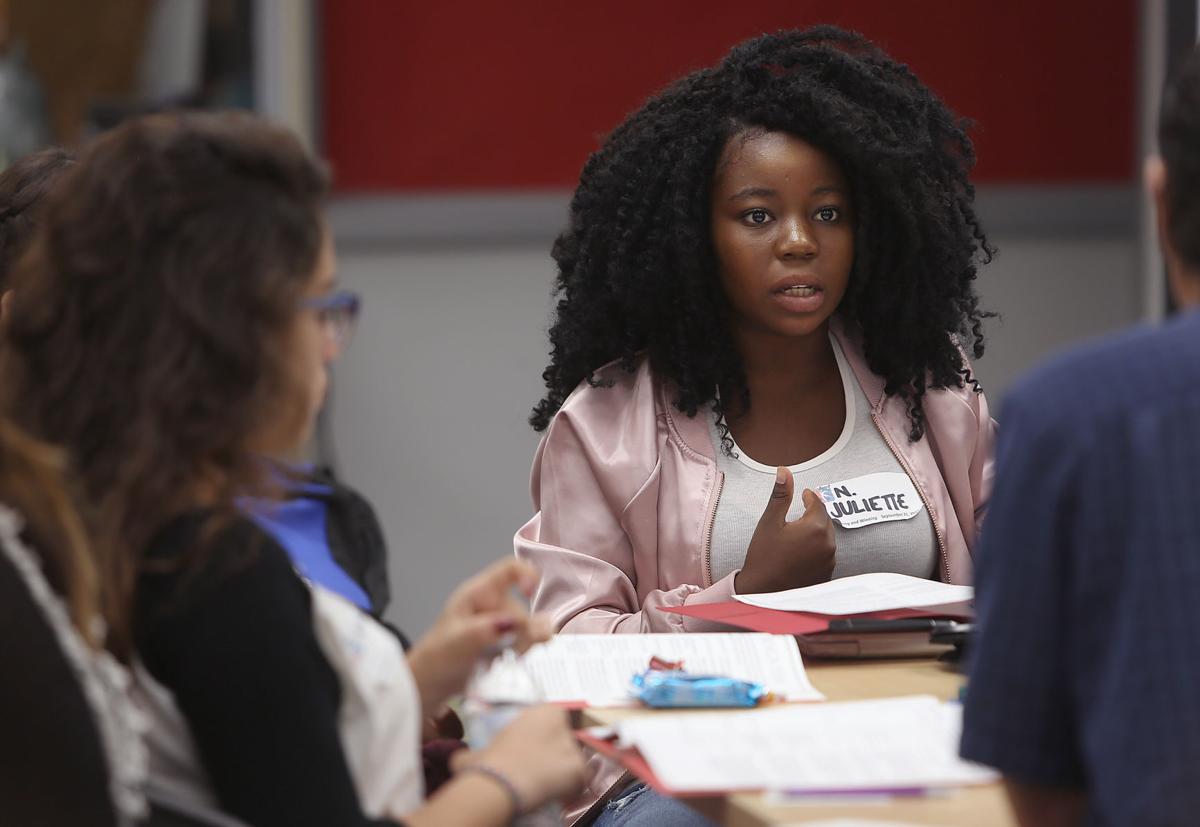 Nzeyimana Juliette, 15, talks about tuition-free college with her group during the Running and Winning event. 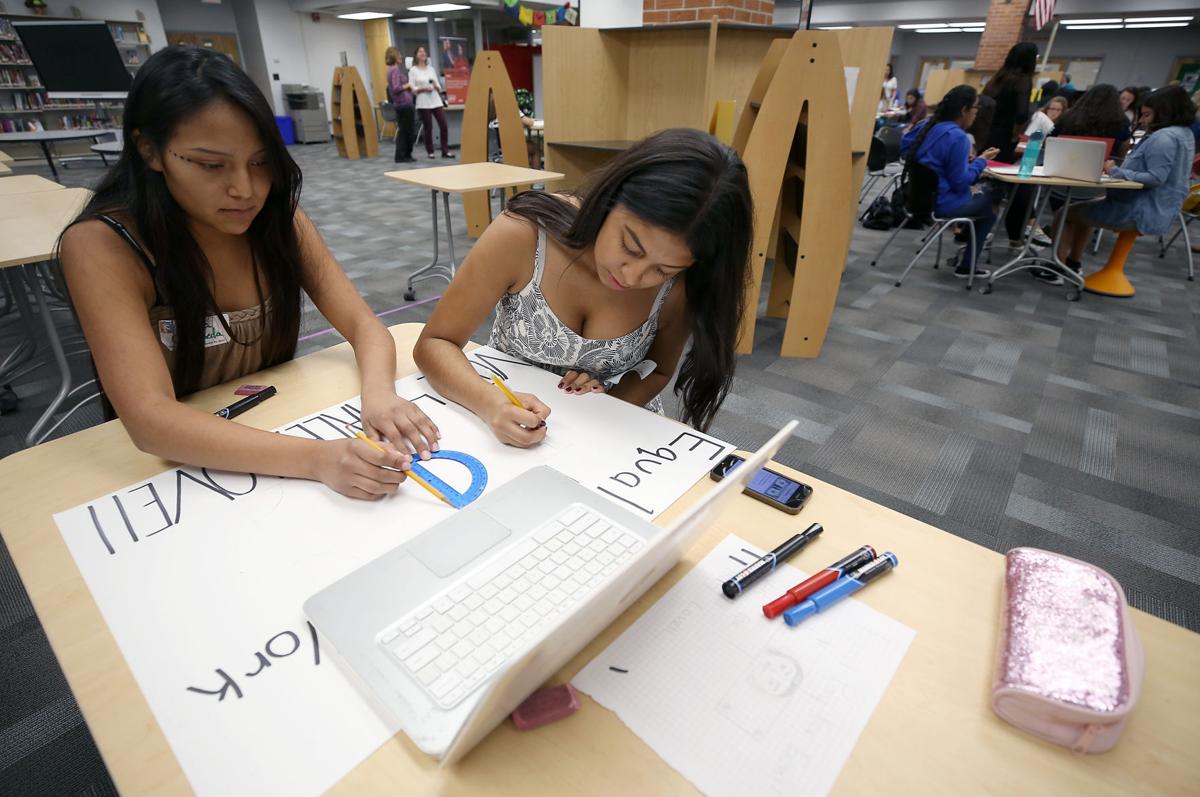 Aliza Osegueda, 16, left, and Jacquelyn Perez, 17, work on their presentation about equal pay for equal work for women at the event put on by the League of Women Voters Tucson.

Brittney Regalado, a 17-year-old senior at Sunnyside High School, scrolls through her phone looking for a “professional photo” of herself.

She holds up a selfie with a Snapchat filter on it for approval from her teammates.

The girls walk over to the blank wall in Sunnyside’s library to snap the perfect candidate photo, while the rest of the team works on a speech.

Brittney is running for Congress at Running and Winning, a nonpartisan, one-day interactive workshop that teaches high school girls about running for office.

About 60 girls from the school were chosen by teachers and counselors to participate in the event, which included the chance to talk to women from Tucson, Pima County and Arizona who have served — or currently serve — as elected officials. Three justices of the peace, women from the TUSD governing board and Rep. Martha McSally were among the lineup.

It was moderated by Lisa Abrams, a judge serving on the family law bench of the Pima County Superior Court.

The event is important to Abrams because she wants girls’ voices to be heard.

“We’ve all had that feeling that you may be sitting at the table but your voice isn’t being heard,” Abrams said. “How do you overcome that? I think it’s resiliency.”

This is the 15th year for the Running and Winning program. The event is coordinated by the League of Women Voters of Greater Tucson and was co-sponsored this year by the Tucson and Casas Adobes branches of the American Association of University Women, the YWCA of Southern Arizona and The Center for Community Dialogue.

“We want young women to be aware of government and how politics work and hopefully some of them will grow up and run for office,” said Phylis Carnahan, Running and Winning’s chairperson. “We (women) make up 51 percent of the population but are underrepresented in Congress.”

During the event, girls were broken up into 10 groups. One girl in each group was chosen to run for Congress. The rest of the girls became campaign managers, communication directors and publicity committee. They chose an issue that would serve as the platform for their campaign, created a presentation and then presented it to the entire group.

“We don’t want special treatment. We want equality,” says Evelyn Acosta as she assisted her team with the speech. Their platform was equality for the LGBTQ population. “It’s always been a big issue, especially for two of us. Honestly, me being a lesbian, I love this so much. All opinions are great, even those that don’t agree with me. I love that they think we should all be equal.”

Another team, using LGBTQ equality and racism as their platform, says it’s a major topic.

“Racism happens every day. Discrimination happens every day and it should be stopped,” said Velynda Camberos, a 14-year-old freshman. “We can stop it by teaching people at a younger age so future generations don’t face these problems.”

Isabel Reyes, a 14-year-old freshman, wants to be an environmental lawyer and says the Running and Winning experience has reinforced that dream.

“They gave us a lot of advice for the future,” Isabel says. “This one lady said that when somebody told her she couldn’t do something it made her want to do it more. I think I will always remember that.”

Gema Molina, a 16-year-old junior also wants to go into law. She is already working toward that by taking a law class and has found Running and Winning helpful.

“I want to help teens who get arrested get back into school,” Gema says. She says Running and Winning “is helping me see it’s possible and there are people who care.”

Tucson High's Human Rights Club is hosting a fundraising dinner to benefit victims of the earthquakes in Mexico.

TUSD board seeks to assuage fears of undocumented students with resolution

Greg Hansen: Loss to bumbling Utes has sent Arizona Wildcats to the dark side

Wildcats' Pac-12 struggles continue, and soon they won't have the comforts of home anymore.

Teachers rely on donations, sometimes come out of pocket to cover costs.

From left to right, Xereena Fisch, 14, Karina Cruz, 14 and Darina Rodriguez, 14, work on a powerpoint presentation about rights for lesbian, gay, bisexual and transgender people.

Nzeyimana Juliette, 15, talks about tuition-free college with her group during the Running and Winning event.

Aliza Osegueda, 16, left, and Jacquelyn Perez, 17, work on their presentation about equal pay for equal work for women at the event put on by the League of Women Voters Tucson.