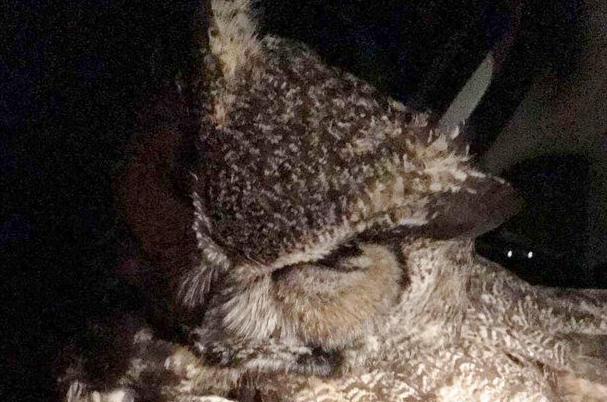 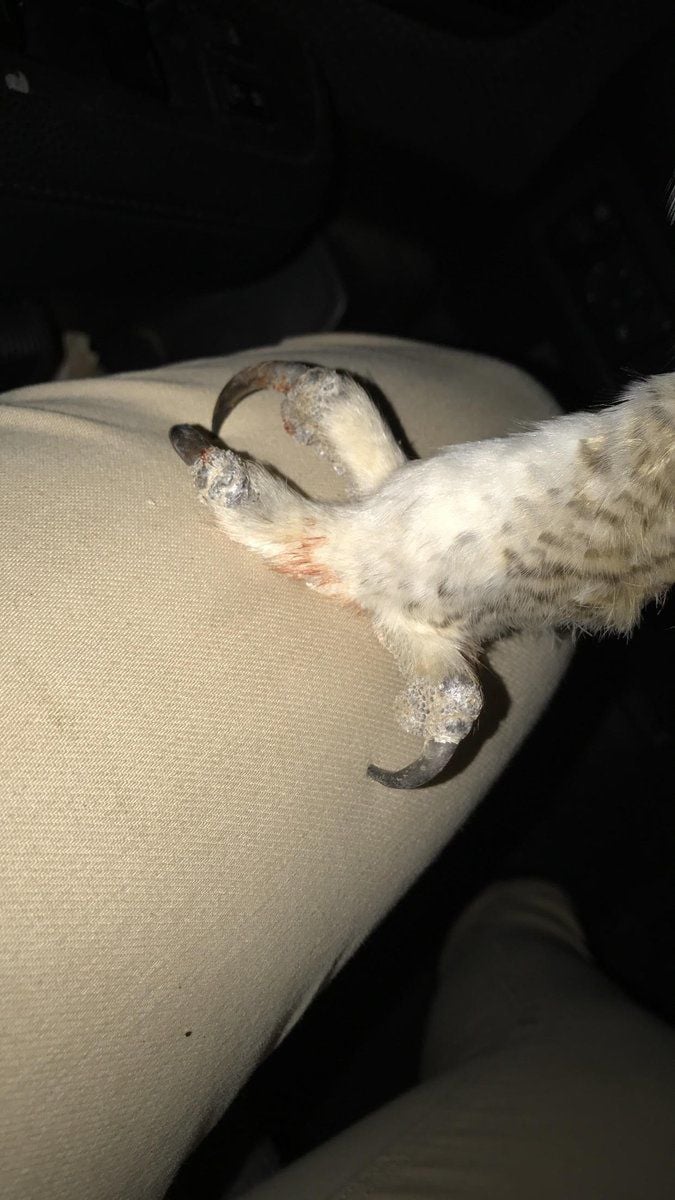 A woman who picked up a dazed owl ended up with the owl latched onto her sleeve and the steering wheel.

She hit the great horned owl with her vehicle on Oracle Road after 11 p.m. Monday, which left it dazed by the side of the road. She turned around to recover it and put it in her vehicle. But it revived and latched onto her with its talons, according to Arizona Game and Fish. The woman eventually coaxed the owl out of the car. She was unhurt.

The woman intended to take the owl to a veterinarian or wildlife rehabilitation center, said Game and Fish spokesman Mark Hart

After the owl latched onto her, the woman called her mother and the department's 24-hour dispatch line to ask for help, Hart said. The dispatcher spent more than 20 minutes trying to help the woman remove the owl from her car, which included turning the steering wheel to try to disengage the owl's talons and spraying the owl with water.

Eventually, more aggressively spraying the owl with water coaxed it to hop out of the car, Hart said.

The woman "learned her lesson" and will be held harmless by Game and Fish, he said.

"It's human nature to render aid to somebody or something that's hurt," Hart said. But trying to help a wild animal can be dangerous.

A few years ago, a passerby tried to help a coyote that was hit by a vehicle, but ended up getting bit by the coyote, Hart said.

Game and Fish also sees people try to help javelinas or fawns, which also can end badly, he said. With fawns, an attempted rescue may just end up separating the fawn from its mother. Game and Fish then has to find a place for the fawn or euthanize it.

In other recent wildlife rescues gone wrong, a couple found a barn owl in the middle of the road in Picture Rocks a few years ago. The man in the passenger seat was holding the barn owl, which has longer talons than a great horned owl. The owl grabbed him by the wrists and wouldn't let go, said Lou Rae Whitehead, animal care supervisor at the Tucson Wildlife Center.

The man went to the hospital for treatment of his wrists and the owl, which had two broken wings, was euthanized, Whitehead said.

In another case, a woman found an unconscious coyote and put it in her backseat. While she was driving, the coyote woke up and got on top of her in the front seat. The coyote didn't bite her, but it had to be euthanized, Whitehead said.

Rescues of wildlife by passersby don't always end with the animal being euthanized, she said. Last year, a woman rescued an unconscious squirrel by the road and put him in a box. The squirrel woke up and jumped out of the box. Whitehead spent an hour trying to get the squirrel from under the seat of the car.

Whitehead said she keeps the appropriate equipment in her car to help injured wildlife, but most people don't. In one rescue gone wrong, a passerby put baby hummingbirds in a box, but the box didn't have any holes and the birds suffocated, Whitehead said.

She urged passersby to put their own safety first when rescuing animals.

A man saw a coyote that had been hit by a car late at night near the Pima Air and Space Museum. While the man waited for wildlife rescuers to arrive, he stayed in his car in the middle of the road. Another car came up, crashed into the back of his car, which hit the coyote. The coyote got up and ran into the bushes.

'No Species is an Island' explores bats, cactus and secrets of the Sonoran Desert

If a female Lepto lives seven years, which is not unusual for this species, she will have flown about 225,000 kilometers (about 140,000 miles) in her lifetime.

Fitz: It's the season to crow and coo about our birds

Birds of a feather flock together to celebrate Arizona's fowl

The center is providing tips after two young javelina became sick due to eating gravel.