Tucson woman's COVID ordeal: 'Do everything in your power to keep her alive'
Share this
Patty Machelor

Her limbs were heavy and wouldn’t move and so, as she looked around her hospital room, she thought there might have been an accident.

“I kept thinking, ‘Is this a dream? Am I going to wake up from this?’” she said. “I couldn’t move except for my feet and my head and I was thinking, ‘Am I paralyzed?’”

Then she saw the date on the patient board and realized nearly two months had passed since she had any memory of being with her husband and their five children.

Christmas, New Year’s and her son’s birthday had all gone by without her.

She had been unaware as members of her church prayed she’d survive, as her husband, Delton Orr, kept long vigils by phone, as he argued with a doctor not to give up on her treatment.

While she was sedated, COVID-19 had very nearly taken her life.

Orr, 51, started to feel sick in mid-December 2020. After a couple days of feeling off, she said she knew something was seriously wrong and asked to be taken to a hospital. She was evaluated, diagnosed with COVID-19, and then sent home with her husband to rest.

Orr has diabetes, which she’s managed well for decades, but that put her at higher risk for complications. Her risk was also above average because, nearly a year earlier, she had surgery for breast cancer and had undergone radiation and chemotherapy.

“That led to some of the difficulties we had,” said Delton Orr, her husband of 33 years. “Her immune system was already compromised.”

Jackie Orr was intubated for her first couple of weeks at Banner-University Medical Center Tucson, but she kept getting lung infections and so they eventually removed the ventilator and performed a tracheostomy to help her breathe that way.

Delton Orr, 52, was not allowed to visit due to COVID restrictions but he often asked a nurse on duty to put the phone near Jackie’s ear. He would talk to her, sing and pray out loud for hours at a time, he said, sometimes all through the night.

Often, he said, the doctors cautioned him that they were doubtful Jackie would survive the night.

In late January, he got a call from the doctor on duty who said they were only going to treat her for a couple more days and then move her to comfort care.

He said he appreciates what the doctors were going through, that the hospitals were overwhelmed with patients and that they did not expect Jackie to pull through.

“I told them, ‘My expectation is you are going to do everything in your power to keep her alive,’” he said. “I don’t think I was disrespectful. I certainly wasn’t trying to be.”

While these conversations were going on, and prayers were being said, Jackie Orr says she remembers some of her dreams. In one, she was looking for her five kids and her husband, desperate because she couldn’t find them.

She also had dreams that someone was trying to convince her that there’s no God and she would argue, vehemently, that it wasn’t true.

Sometimes, she said, she could hear people — perhaps medical workers or someone in a nearby room — and she would try to cry out to them. She said she kept trying to speak and this same refrain would repeat in her head: “Help me, help me, help me.”

“And once I had a dream in which I asked, ‘Am I dying, God? OK, I’m ready,’” she recalled. “I remember praying, ‘Please take care of my husband and my family.’”

Within a couple of weeks of that conversation about comfort care, however, she opened her eyes.

“She’s doing great,” Delton Orr said. “It’s been a couple of weeks now that she’s been walking without a walker.”

There are still challenges, though.

She cannot grip with her hands and they often shoot with pain, which her therapists say is related to nerve damage healing after so many weeks of being bedridden and sick.

Her hair started falling out in clumps and became so aggravating that she finally just shaved it off, despite protests from their two daughters.

She’s tired a lot, but it’s already much better than when she first got home.

“On Mother’s Day, I think I hugged her about 20 times,” Delton Orr said, his voice cracking with emotion. “This day could have been a whole lot different.”

Jackie and Delton Orr met during their high school years while attending the same church. After they married, they joined Faith Community Church and have been there for several decades. Delton Orr works there as the youth pastor.

The family owes about $32,000 so far, and the bills are still coming in, but Delton is unfazed. A friend from church started a GoFundMe, which Delton Orr said he feels a bit sheepish about, but the debt is not something he thinks about very much.

He recently reassured his oldest son when the latest bill arrived.

“We’ll make payments for the rest of our lives,” he said. “Who cares? Is there a price we can put on having mom here?”

Vaccination rates in Arizona have been declining, but they may get a bump as more kids get vaccinated.

While there is no evidence that the COVID-19 vaccine has a dangerous interaction with either alcohol or marijuana, heavy drinking may blunt your immune response to the vaccine.

White people have been vaccinated against COVID-19 at a higher rate per capita than any other racial or ethic group in Arizona. More of them qualified for the vaccine from the start.

“As a public health professional, I'm in no way advocating in any way, shape or form, for people not to get vaccinated,” said Arizona Representative Alma Hernández, a Tucson Democrat,after disclosing she contracted COVID-19 despite being vaccinated.

Arizona No. 1 in getting COVID shots to rural residents

Arizona is the most successful state nationwide for immunizing adults against COVID-19 in its smaller rural counties, says a recent U.S. Cente…

As vaccines are now available for those as young as 12, Pima County is ramping up its efforts to increase youth vaccinations by sharing information from youths themselves. 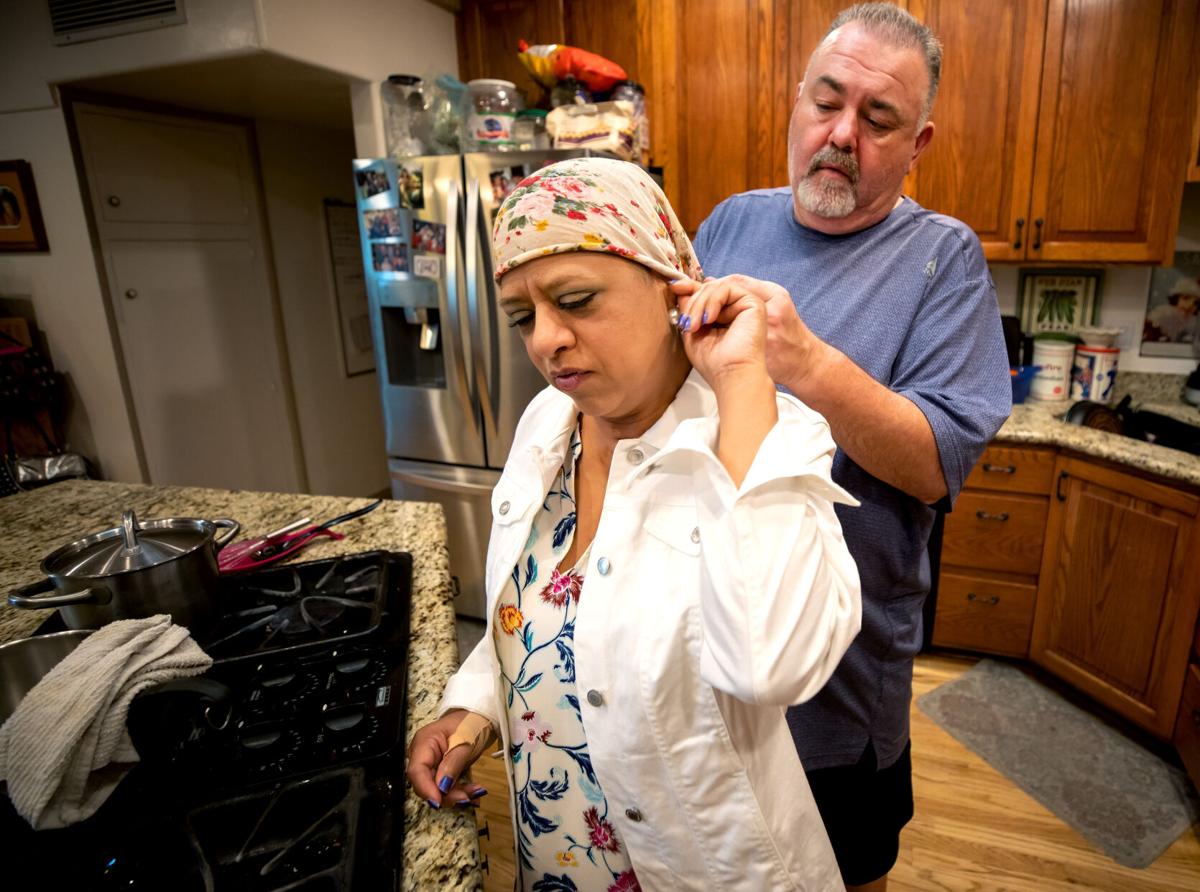 Delton Orr helps his wife, Jackie, fix her head wrap while cooking dinner at their home in Tucson on Friday. After becoming critically ill with COVID-19, Jackie is home with her family and recovering.

A “get well” balloon is stuck in a skylight inside the Orrs’ Tucson home. “Do everything in your power to keep her alive,” her husband told doctors.