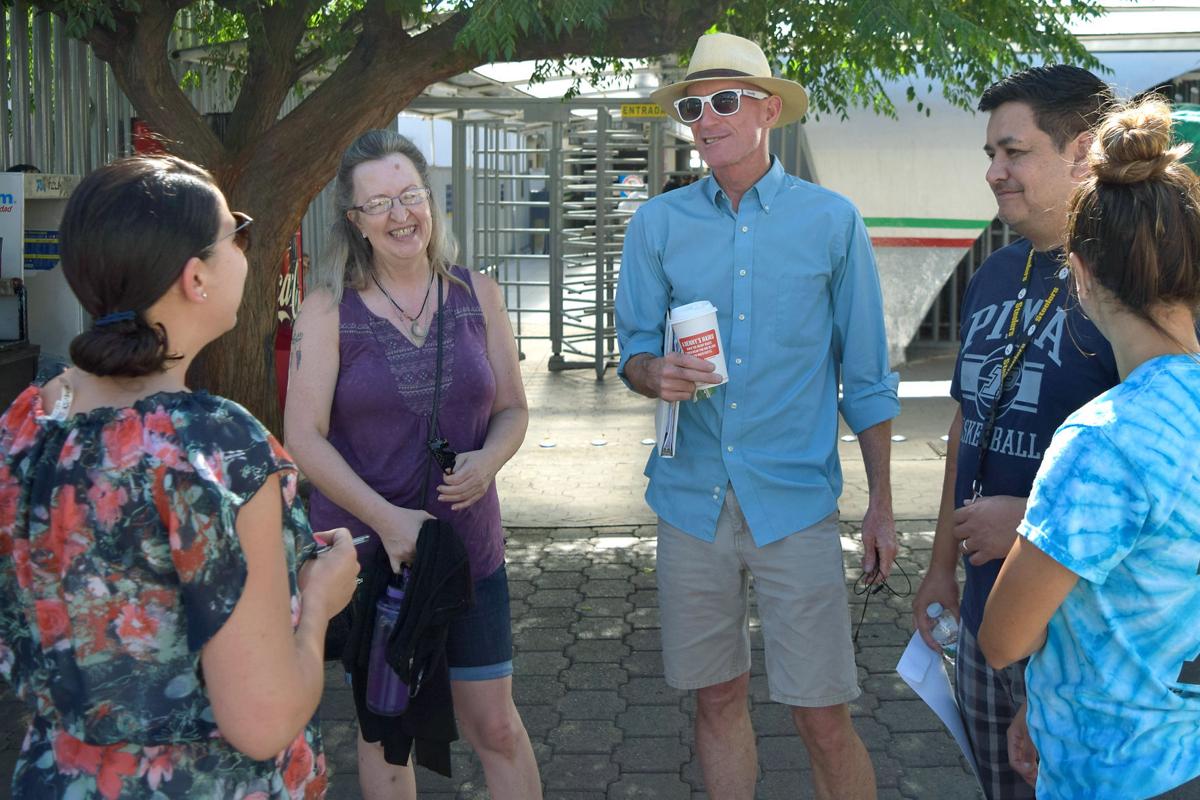 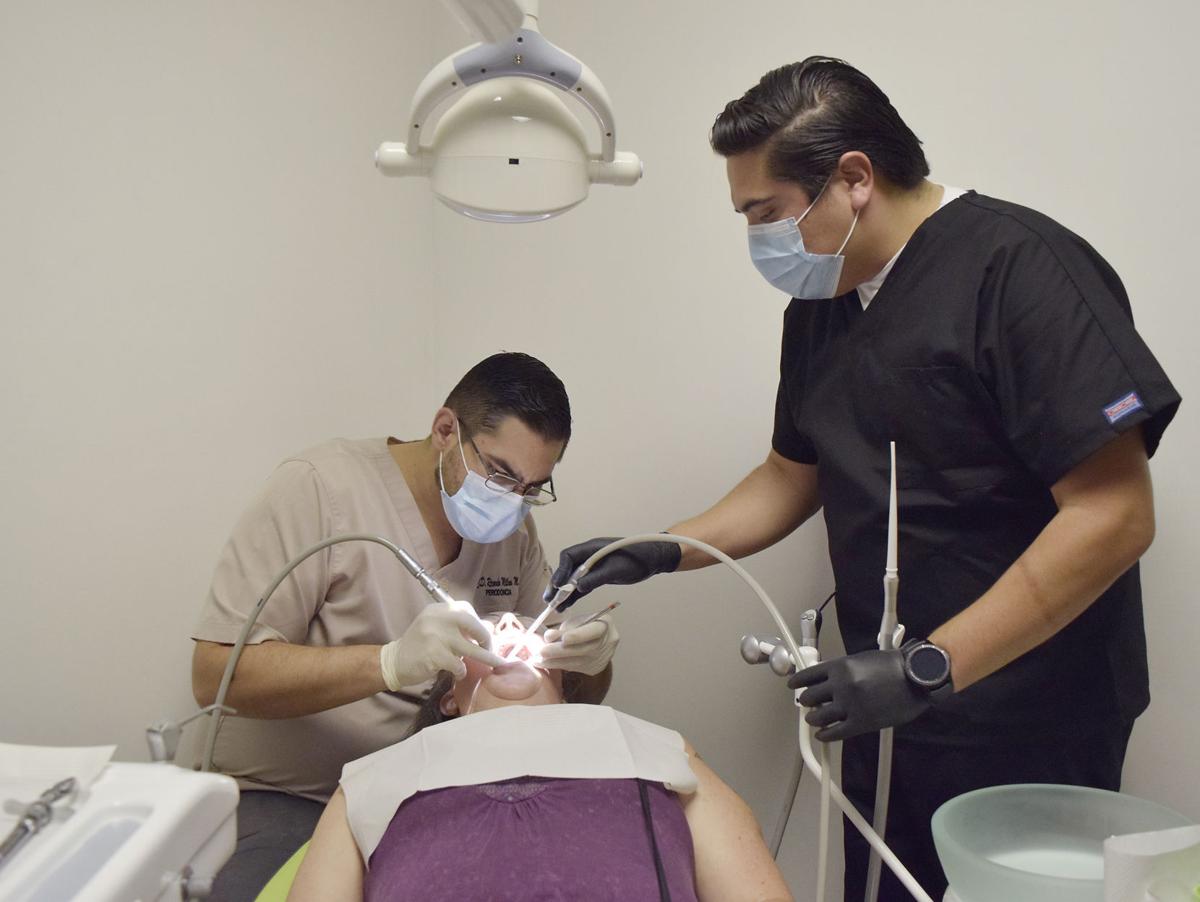 Just beyond the pedestrian entrance on the Nogales border lies a courtyard lined with pharmacies and dentists’ offices. Inside the waiting rooms sit Americans seeking cheap dental work.

Former Tucson dentist Mark McMahon decided to capitalize on this phenomenon and now takes van loads of people across the border twice a week.

“The first time people come down, most go, ‘Whoa, that was easy. I can do that,’” he said.

Every Tuesday and Thursday, patients meet McMahon at the Denny’s near St. Mary’s Road and Interstate 10 in Tucson. They pile into his yellow 12-passenger van to make the hour drive down to Nogales. Magnets on the side of the van show a smiling coyote advertising “70 percent off.”

On a good day, six to eight people will meet McMahon for the drive.

Some are repeat customers who choose to ride with McMahon, even after seeing how easily they can make the trip themselves.

“We also encourage people to drive on their own,” McMahon said. “We even have a little video that we send out to people to teach them how.”

Janice Crannell booked a third trip with McMahon after a consultation and gum surgery the weeks before.

“It’s great,” she said. “You never know how you’re going to feel after a major enough surgery, and then you don’t have to deal with the driving. Dr. Mark is really very pleasant.”

Others make the trek from Phoenix to meet with McMahon.

Larry Romero, a dispatcher at the Sheriff’s Department, brought his daughter, Amber, to Nogales to have her wisdom teeth removed. Romero’s wife is from Nogales, so his only concern was the procedure itself.

McMahon calls his service Coyote Dental — a reference to the smugglers who help migrants cross the border. He charges $50 for the drive and receives a commission from the Nogales dentists.

He first thought of the idea after selling his practice in 1999 and traveling for four years, journeying to the southern tip of South America.

Upon his return, McMahon searched for job opportunities in Nogales, Sonora. He scoped out prospects at four dentists’ offices undercover as a patient and was impressed with the quality of service offered by the Mexican dentists.

“I realized, because the prices were so low, I wasn’t going to make a lot of money as a dentist,” he said. “But I saw this huge opportunity for the fact that just across the border is this incredible wealth of dental providers and technology.”

After parking the van at a Burger King on the U.S. side, McMahon and the group cross the border with ease. A Mexican guard waves them through without checking IDs. On the other side, a representative from one of the offices takes Romero, his daughter and Crannell to The Tooth Inc.

Over the past two years, McMahon has worked with several of the dentists just across the border, figuring out which work best for his patients.

Dr. Abraham Chavez Portillo and his wife, Zuleika Valdez, opened The Tooth in November. The office is housed in a nearly empty retail center atop a flight of marble stairs. The waiting room is small, but has cushioned seating, a fridge with bottled water and a Keurig coffee machine.

“As far as the offices go, I was actually quite impressed,” Crannell said. “They are quite clean and state of the art and so much less expensive.”

The Romeros wait patiently, reading magazines and looking at their phones while a television shows scenes of Ashton Kutcher playing Steve Jobs.

Meanwhile, Crannell sits in the dentist’s chair, her mouth wide open as Chavez and Dr. Ricardo Milan, a gum specialist, make small talk and prod around in her mouth.

A painful experience with an Illinois dentist left Crannell skeptical of the trip to Mexico, but her concerns vanished in the chair.

“They were much more accommodating,” she said. “The doctors over there are very pleasant.”

Valdez explains that Chavez grew up in the United States and went to Pima Medical Institute, where he studied as a dental assistant. He decided to go to Ciudad Juarez for dental school because it was cheaper and faster than studying north of the border.

Chavez and Valdez live in Rio Rico and drive 15 minutes to Nogales for work.

Some of their most-popular procedures are root canals and extractions.

“It is a very good deal considering the price,” Valdez said, “and the dental quality is as good as if you did it in the United States.”

However, American dentists contend the care received in Mexico is not always as safe as it is in the United States.

“The thing we generally try to counsel consumers on is do your research before you go,” said Kevin Earle, executive director of the Arizona Dental Association. “There is no consistency in the training requirements in Mexico. They don’t have licensing boards like we do.”

A fact sheet released to members of the Arizona Dental Association warns patients that Mexican dentists do not have the same legal protections as in the United States when complications arise from dental work.

“Many of our dentists report to us that patients have returned to them after work has been done that’s not to an appropriate standard,” Earle said.

The Arizona association warns against problems in water sanitation, materials used for crowns and a lower threshold of educational and regulatory standards in Mexico.

Despite the potential issues some Mexican dentistry may pose, McMahon says he has never had issues with the dentists to which he takes patients.

In one of the most-popular offices, Dental Laser, Americans fill a relatively large waiting room. The office is modern. Secretaries sit behind a semicircular desk, checking in patients as nurses and doctors mill about.

One benefit to having dental work done in Mexico, rather than the United States, is dental specialists work in the same office, McMahon said. Instead of making separate appointments, patients can address their needs in a single visit.

Dental Laser houses 15 dentists specializing in everything from root canals to cosmetic dentistry.

Another advantage is the technology, McMahon said.

One example is a machine that will carve a crown for a tooth from a 3D model in minutes. McMahon said only some dentists in Tucson have the technology. Dental Laser has two machines.

Sometimes, after patients have completed their appointments, McMahon will take them for chips, salsa and tequila at one of the area’s trendier restaurants.

Re-entry into the U.S. takes longer than crossing into Mexico, but wait times vary. This time the group is back on U.S. soil in a matter of minutes. The van returns in the early afternoon.

Nick Meyers is a journalism student at the University of Arizona and an apprentice at the Arizona Daily Star. Contact him at starapprentice@tucson.com.

To research before you go

Tennis program brings children from both sides of the border together

He needed to hear from the people caught in the middle of failed U.S. immigration policies.

Their shared resource is vital to both.

For most, it is their sole source of income.

Tucson restaurants that served their last meal in 2017

What better way to light up the night than a safe, controlled ignition of a gas! Arizona Daily Star photographer Kelly Presnell revisited neon…

Students provide services to the public in new clinic as part of their learning. A federal grant has boosted the program.