The Latest: President Trump was rushed to underground bunker 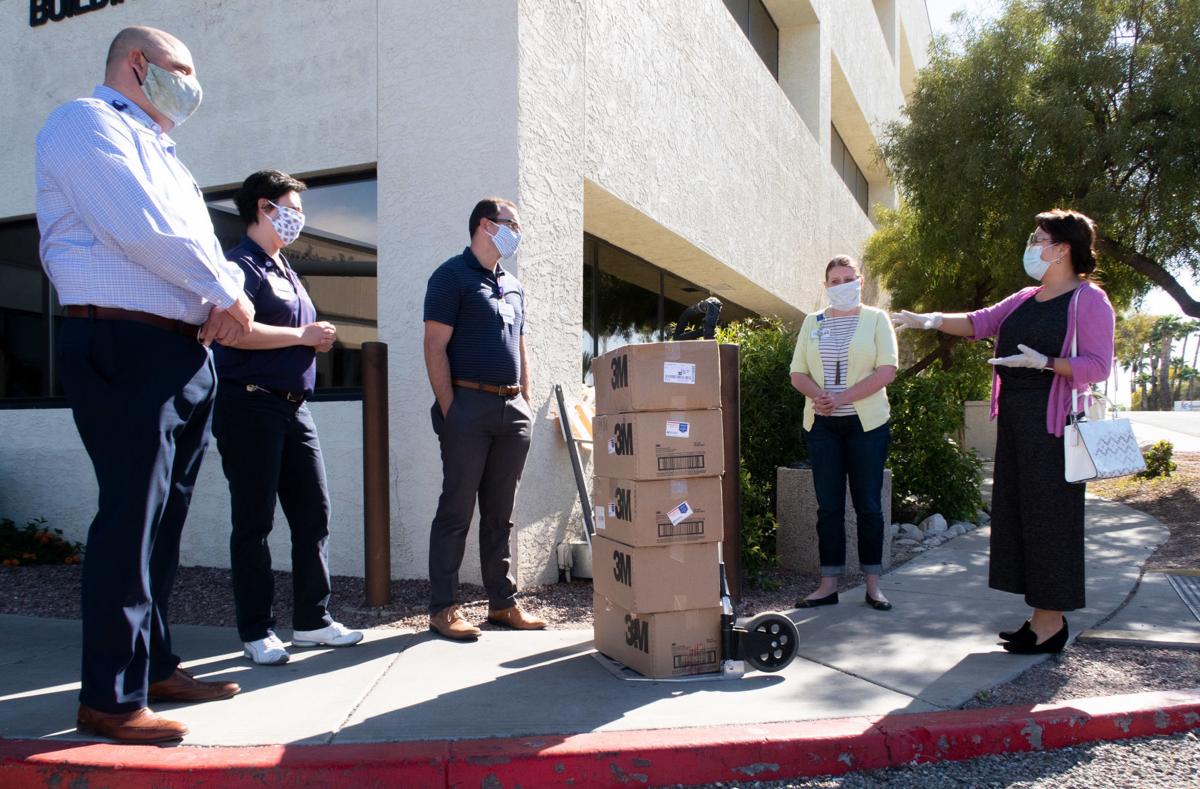 Tina Liao, right, gave 800 N95 face masks to Northwest Medical Center on April 17. About 3,200 masks Liao had shipped to China went unused and made their way back to Tucson. 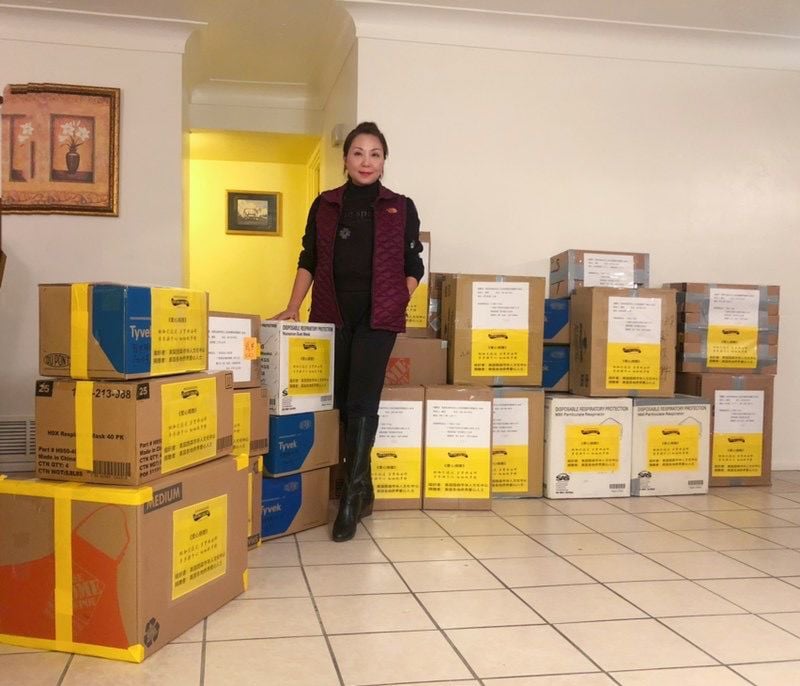 In January and February, Tina Liao sent thousands of N95 masks to China to help health professionals. Many members of the Chinese-American community in Tucson, including the Tucson Chinese Cultural Center, helped pay for the costs. 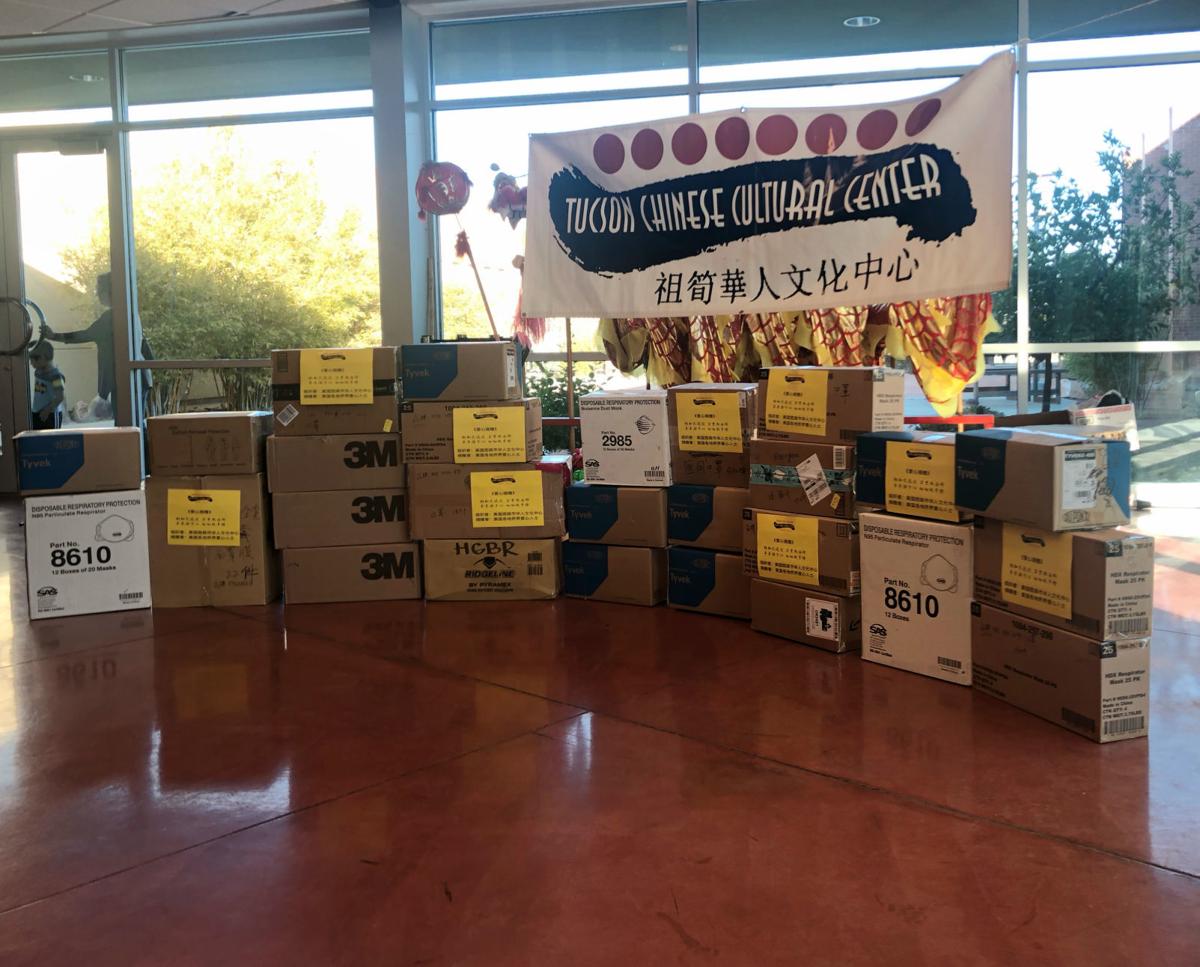 In January and February, Tina Liao sent thousands of N95 masks to China. The Tucson Chinese Cultural Center and the local Kai Foundation helped cover the costs. When the pandemic escalated here, acquaintances in China returned the favor.

Thousands of N95 masks recently came full circle after they were donated to medical professionals in China earlier this year and the unused ones were given back to Tucson’s health-care providers in April.

The initiative started when Tina Liao and her husband, Jinshan Tang, started to hear what Liao described as “horrible stories” happening amid the coronavirus crisis in Wuhan, China, home of the first COVID-19 outbreak.

“We have friends who live in Wuhan, and they were very desperate for masks because medical staff didn’t have enough protection,” says Liao, who is the president elect of the Tucson Chinese Association. “They were crying out for help.”

“When we heard from our friends in Wuhan, we said, ‘OK, we want to help them — whatever way we can,’” she says.

Tang owns local company Innova Engineering and knows of suppliers who carry N95 masks. Tang and Liao started ordering masks in bulk in January and February — out of their own pockets at first — from all of the available suppliers they knew between Tucson and Phoenix.

Liao says she often became emotional when telling suppliers of her plans to send the masks to China.

“As soon as they got the supply in, they’d call us,” Liao says.

The couple ordered the masks, and shipped them, in separate batches, during the first two months of the year.

When Tucsonans — most in the Chinese American community and from the Tucson Chinese Cultural Center — heard what Liao and Tang were doing, they pitched in to help cover the priority shipping fees to China, which totaled thousands of dollars.

“Because it’s so urgent, I said, ‘Whatever it takes,’” Liao says, adding that if she purchased standard shipping through some carriers — rather than priority — the masks would’ve taken months to be delivered overseas.

“You can’t think about it too much when you’re helping someone so desperate,” Liao says. “It’s about people’s lives.”

Liao’s friends in Phoenix, California and Texas also donated money to support the cause, and the local Kai Foundation threw in $5,000.

Altogether, about 10,000 N95 masks were sent to medical workers in China, with most going to a hospital in Wuhan.

More than 1,000 N95 masks were also donated to the local Chinese American community and 800 nonmedical masks were given to folks at the Tucson Chinese Cultural Center.

By the time the pandemic started to escalate in the United States and masks became harder to find, a doctor in Wuhan grew concerned for Tucsonans.

“They kept asking me, ‘How’s the situation? Do you need help?’” Liao says. “I said, ‘The hospitals are short of N95 but we can’t find any more.’ And they said, ‘We still have some. We’ll ship them back to you.’”

“They said, ‘You supported our hometown, so we want to support you.’”

A business owner in China decided to cover the shipping fees back to Tucson.

“She said, ‘You guys are so nice, so we want to do the same for you,’” Liao recounts.

About 3,200 of the masks that Liao shipped to China went unused and have now made their way back to Tucson. Liao has distributed them to front-line workers in local hospitals, clinics, nursing homes and the Northwest Fire District.

“Everybody who got (the masks) — they’re amazed and are like, ‘Where did you get N95?’” Liao says. “They really appreciate it.”

“When we tried to help the people in Wuhan, they said they really appreciate the help and when we needed help, they wanted to return the favor,” she says. “That’s the world of helping each other.”

A separate group, made up of more than 300 volunteers and dubbed Chinese Americans COVID-19 Relief AZ, has donated 100,000 surgical masks to Arizona front-line workers, with at least 60,000 more to be delivered.

The group was formed in just two days in March and has so far donated 15,000 surgical masks to Tucson hospitals and the Golder Ranch Fire District, with another 8,000 expected for the Tucson area.

The donations have been made possible in part by monetary contributions. About $50,000 has been raised through the group’s GoFundMe account, with thousands more raised through businesses that are matching funds donated by employees. One of those businesses is Oro Valley’s Roche Tissue Diagnostics, says Fang Fang, who is the relief group’s Tucson organizer.

“I feel that if we can do something, we should do something to protect the health workers,” Fang says. “That’s the purpose of the group.”

All of the masks come from manufacturers in China, and volunteers have worked to make sure they’re approved by the FDA. Since many of the volunteers have day jobs, they often work through the night to communicate with suppliers overseas, Fang says.

On her own, Fang has also donated 10,000 nonmedical masks to people in Wuhan. She’s also awaiting a shipment of 10,000 more, which she plans to donate to the Tucson community and local clinics. An additional 668 N95 and surgical masks were donated to Golder Ranch from the Chinese American community in Tucson, Fang says.

“We noticed that it’s harder to get masks from the market,” Fang said after taking her son to the doctor last month. “The doctor told me that they don’t have too many masks at the clinic, and that made me feel that I should do something to help.”

For Liao, helping others can help yourself, she says.

“We need to unite and help each other. That’s how we can get over this.”

But Tucsonans are lauded for the kindness and support shown to help keep restaurants open.

Joe Mooney started his channel about five years ago and now has more than 400,000 subscribers, with more than 47 million views across his 251 videos.

With more than 95% of its rooms on the ground floor, visitors can often access the outside of a patient’s room without having to enter the hospital. Others who have to enter can visit from a hospital patio window, after being issued a face mask and having their temperatures taken.

For some of Tucson's vulnerable, Brenda Merino Alvarez is the only interaction they have as she delivers meals to their homes four times a week.

Cactus Drive In previously held its drive-in movies at the swap meet, but is testing its pop-up operation at Tucson Speedway — this time with a much larger movie screen.

Tina Liao, right, gave 800 N95 face masks to Northwest Medical Center on April 17. About 3,200 masks Liao had shipped to China went unused and made their way back to Tucson.

In January and February, Tina Liao sent thousands of N95 masks to China to help health professionals. Many members of the Chinese-American community in Tucson, including the Tucson Chinese Cultural Center, helped pay for the costs.

In January and February, Tina Liao sent thousands of N95 masks to China. The Tucson Chinese Cultural Center and the local Kai Foundation helped cover the costs. When the pandemic escalated here, acquaintances in China returned the favor.