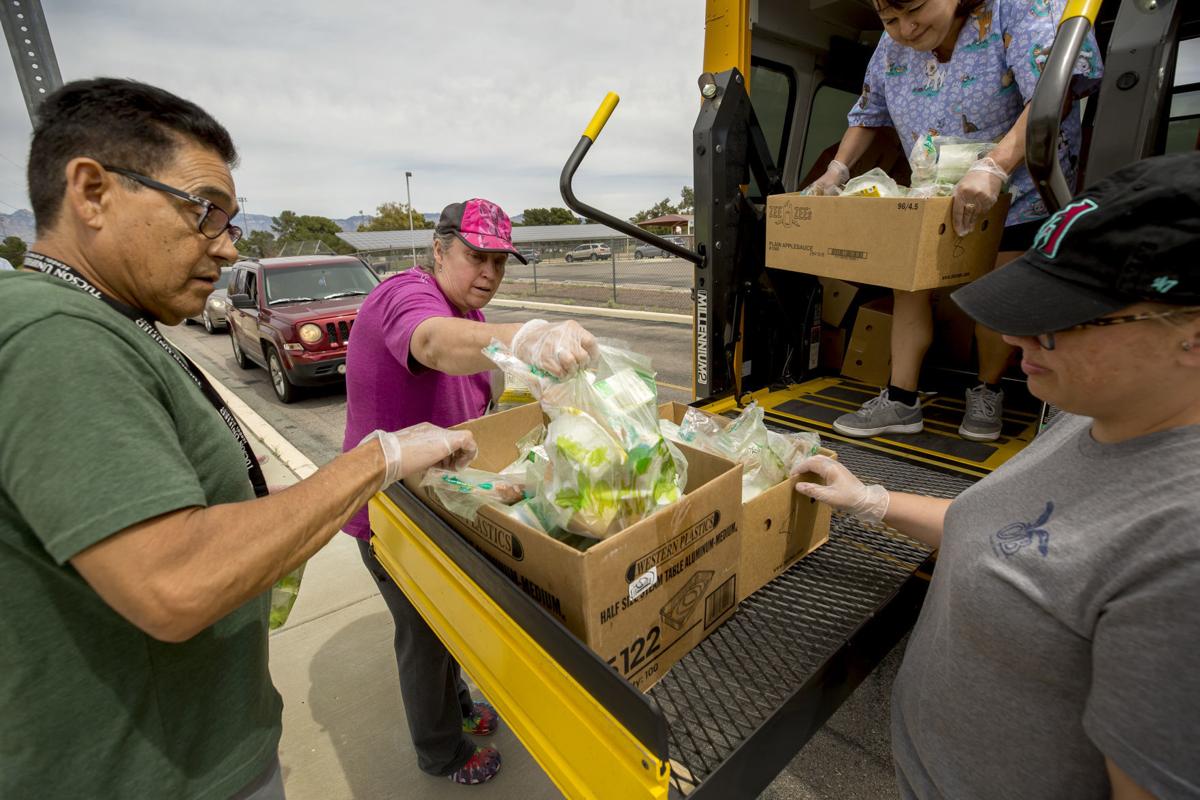 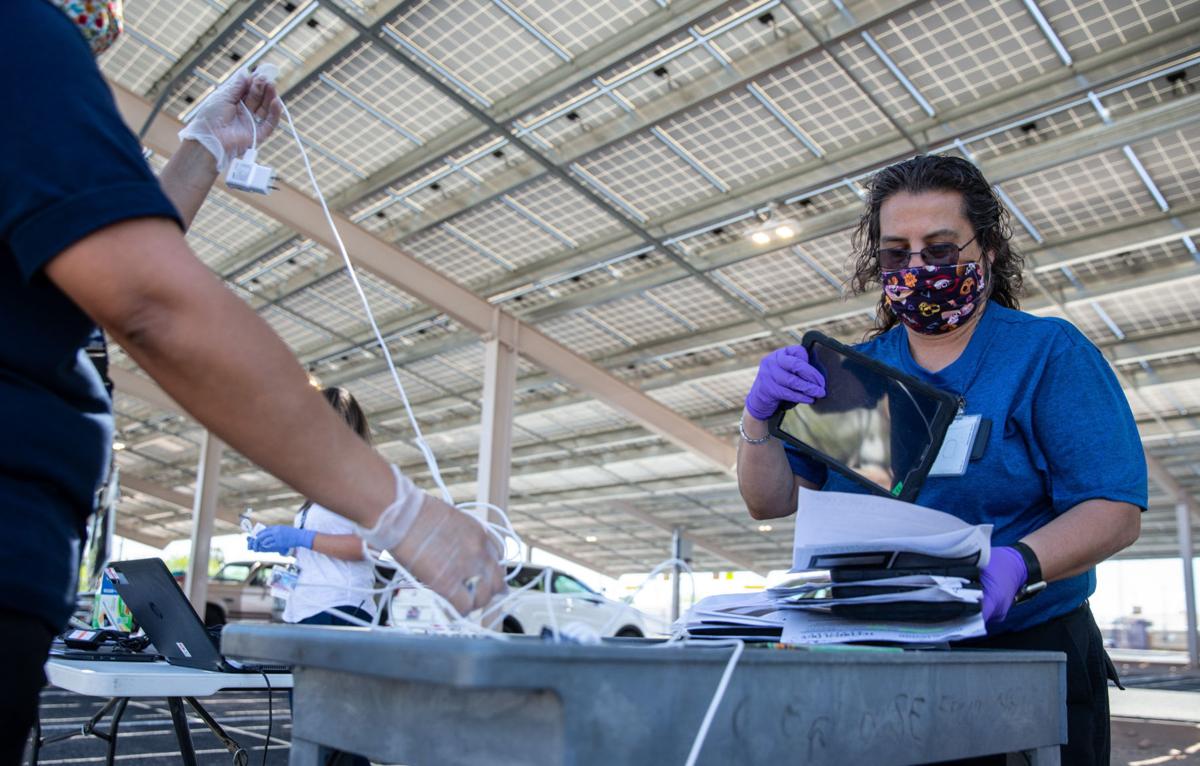 Eunice Fierro, an office assistant at C.E. Rose PreK-8 School, organizes laptops and tablets during a drive-thru pickup at the TUSD school on Tucson’s south side. 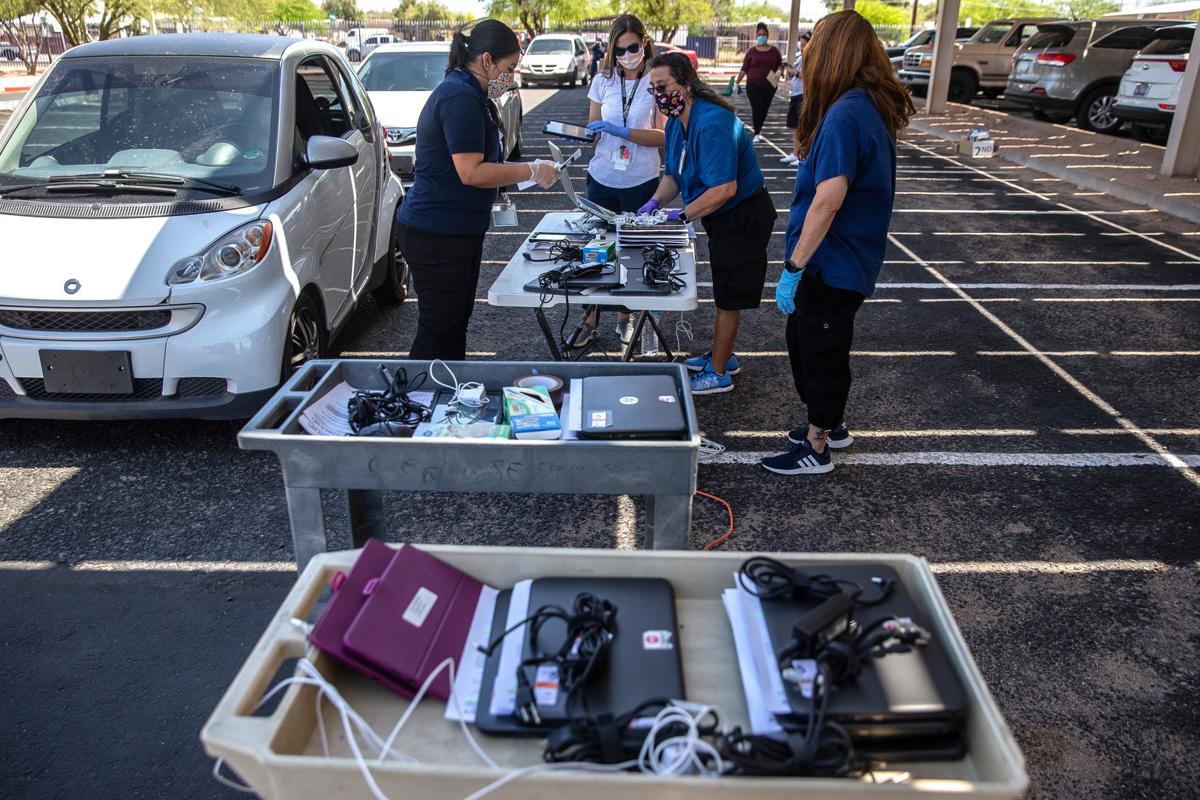 Tucson’s largest school district is facing a projected $8.5 million in increased costs due to higher spending and revenue losses brought on by the coronavirus closures.

Thus far, TUSD has spent $3.5 million on Chromebooks for students who did not have a device at home for online learning, over $1 million in curriculum materials and an ongoing $125,000 a month running two child-care centers for children of front-line workers.

The district is also facing a possible $3.5 million revenue loss from being heavily in the red on its food bill, Trujillo said.

The district receives federal funding to feed low-income children. However, even though TUSD is only feeding a quarter of the children it usually serves, and it is therefore receiving a quarter of the federal dollars, the district has already purchased enough food to feed its standard number of children and is paying the same number of employees that would have been preparing that food.

The more than $1 million the district spent in curriculum materials includes a $70,000-a-week printing bill during the first month of closures, creating packets for children who couldn’t do their learning online, as well as emergency funding of $131,000, approved earlier this month, to buy workbooks for Grades K-4.

“We’re going to be probably clocking in at about $8.5 million in closure costs at this particular time,” Trujillo said.

To afford the Chromebooks, TUSD put some plans on hold that it had for next year, including school parking lot improvements; adding more librarians in middle schools and music teachers in elementary schools; refurbishing music, band and sports equipment; and more.

To offset the loss on the food bill, the district has to use a portion of funding it targeted for refurbishment of computer labs; classroom digital projectors and interactive whiteboards; and audio and video equipment in schools.

A few costs have come down because of the closures, which can offset some of the unexpected costs.

The district is saving in fuel costs as it runs fewer routes. And it is spending less in professional development since teachers haven’t been able to attend the typical conferences and workshops.

“To be honest, the amount of money we have available in the budget to offset is not much,” Trujillo said. “It’ll help us, but it’s definitely not much. And so we’re going to be heavily counting on stimulus money coming in to replenish that money that we’ve already spent up front.”

The district should get a one-time distribution of stimulus funding from the federal CARES Act, which Trujillo said is needed to cover a host of necessities for the life of the closure.

The Coronavirus Aid, Relief, and Economic Recovery Act, passed by Congress in late March, will provide $13 billion to schools and districts across the country, with $277.4 million allocated for Arizona K-12 schools that have incurred costs associated with closures due to COVID-19 and another $69 million in flexible dollars for any education entity, at the governor's discretion, according to TUSD’s lobbying firm Triadvocates.

The Arizona Department of Education is still working out the model and time line for the distribution of that aid.

As things stand, there’s no funding mechanism other than the stimulus package to fund schools if they stay closed into next school year, which Trujillo said is a strong probability.

“If the closure goes into next year ... or we do the first semester in a state of closure or the whole year — that’s it,” Trujillo said. “Those dollars are going to have to keep services going, transportation going, fuel for the buses. They’re going to have to sustain our salaries. So we’re anxious to figure out what that reimbursement looks like.”

Educators uncertain when, how Arizona schools will reopen

At least one Tucson-area school district is considering having students attend on a staggered schedule, trading off in-person instruction and live-streaming classes from home.

The new high school is designed to help students earn workforce certification and training in fields ranging from culinary arts to health care to automation.

Many students and parents are struggling to adjust to remote learning. For kids with special needs, the hurdle to staying on track can be even harder to overcome.

'Dangerously hot conditions' are expected in Tucson this week

Campfires are prohibited, including the use of charcoal grills and barbecues, and coal and wood burning stoves in any area of the park.

When the new director comes on board, interim director Dr. Bob England will stay on as a part-time physician to see Pima County through the initial phase of the coronavirus pandemic.

Thirteen interdisciplinary groups will work on the projects to address all sorts of challenges caused by the coronavirus.

More than 470,000 Arizonans have filed for unemployment since pandemic began

The Arizona Chamber of Commerce and Industry says one solution to the large number of people out of work is to retrain them to do something else.

A Marana High School junior conducted a survey asking which coronavirus mitigation measures people were following. The responses she got, although not scientific, showed people were largely following social distancing and other measures recommended by public health departments.

Sole proprietors and other self-employed workers struggle with COVID-19 jobless benefits and loans as state and federal programs restart.

As coronavirus school closures continue, scores of Tucson children have fallen off the radar

One Tucson school district is making home visits in an effort to connect with kids who have been unreachable over the last two months.

Arizona rolls out recommendations for reopening schools as coronavirus continues

Distancing school desks, temperature checks, face masks and limiting the use of commonly shared areas like cafeterias and playgrounds are among the recommendations for Arizona schools devising reopening plans.

Eunice Fierro, an office assistant at C.E. Rose PreK-8 School, organizes laptops and tablets during a drive-thru pickup at the TUSD school on Tucson’s south side.