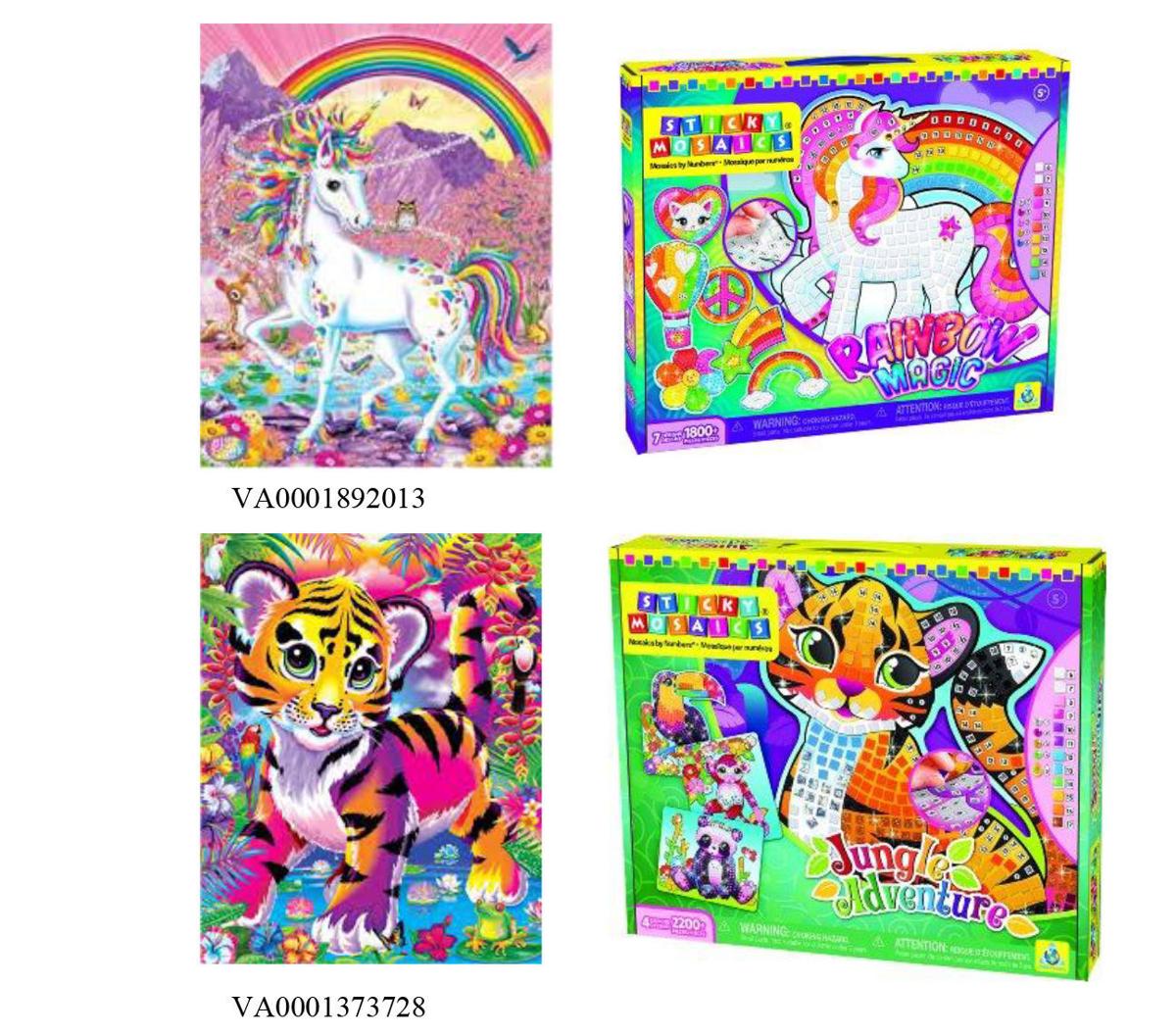 Lisa Frank is suing a toy company in U.S. District Court in Tucson for allegedly copying her copyrighted images of fanciful creatures. Frank’s designs are at left, with the other company’s designs are on the right. 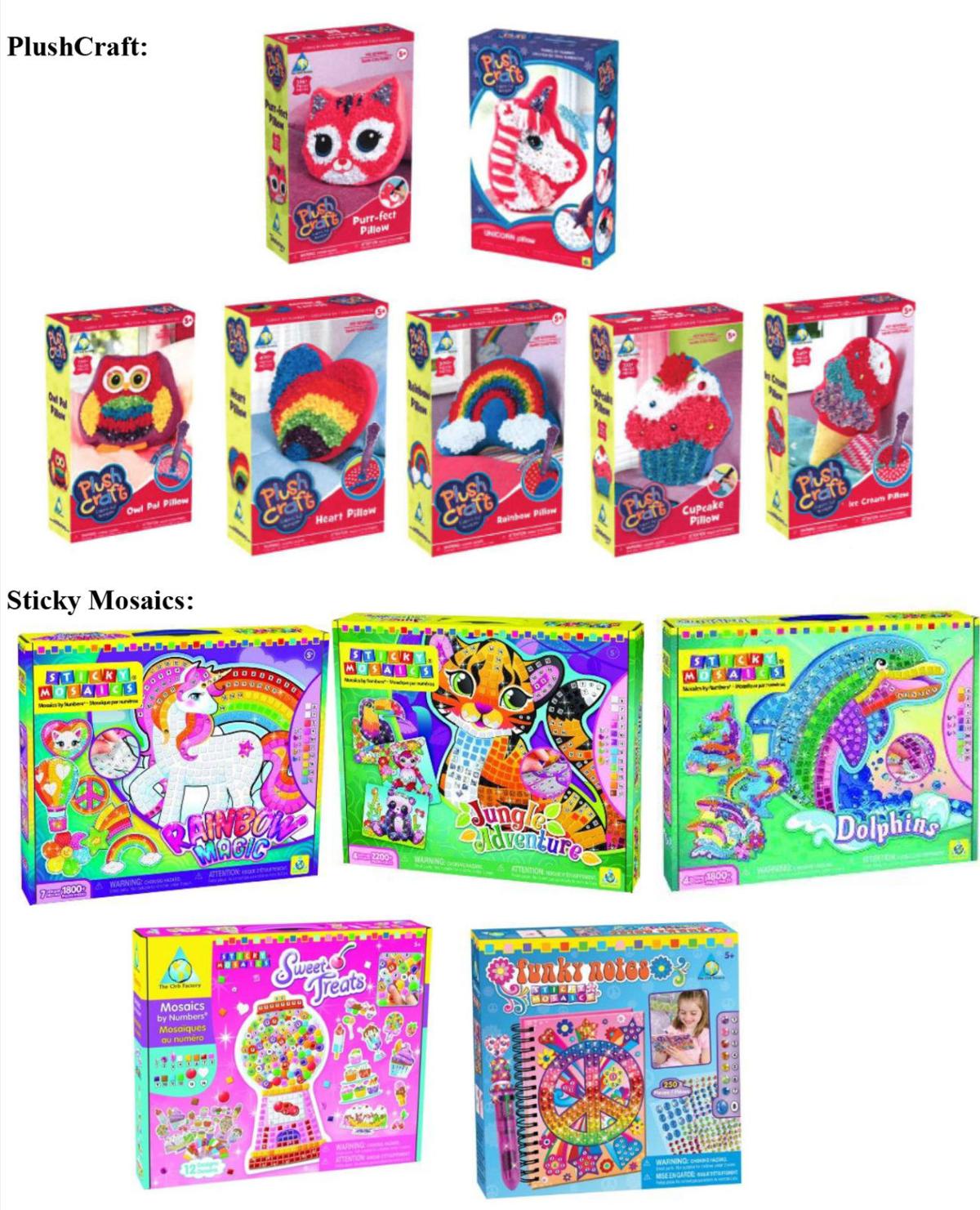 Lisa Frank is suing a toy company in U.S. District Court in Tucson for allegedly copying her copyrighted images of fanciful creatures. Some of the toy company’s disputed designs are shown here.

Where do rainbow unicorns come from? Is one pair of surfing dolphins the same as the next?

Those are critical questions in a federal lawsuit filed by Tucson business legend Lisa Frank, who built an empire of brightly colored school supplies and crafts that were wildly popular among children in the 1980s and 1990s and continue to be sold today.

The courtroom tables at U.S. District Court in Tucson were stacked this week with boxes of pink toy kittens and unicorns with pink-and-white manes. The boxes faced the eight-person jury who will decide whether to tell Nova Scotia, Canada-based toy company Orb Factory to stop using certain images and pay Frank all profits earned by using those images, along with unspecified monetary damages.

She testified Thursday her portfolio, which includes 400 copyrighted images, has generated $1 billion in sales since the late 1970s.

Those sales followed years of designing that began when she was a child, Frank testified.

“I was a little girl who colored all the time, so rainbow was my life,” she said with a chuckle. “My style was what was from inside of me and that’s what I created.”

Frank claims Orb Factory started copying her designs after hiring her former art director Laura Binder in 2012. Frank testified Wednesday she was “shocked” when she saw how similar Orb Factory’s images were to her own creations.

Frank’s lawyer Kirk Hallam said Orb Factory’s designs “shifted to look remarkably” like Lisa Frank’s designs a year after Binder was hired by Orb Factory. As a result, Frank is faced with losing “what she spent the last 40 years of her life building,” Hallam said in his opening statement Tuesday.

Gina Durham, part of a seven-person legal team for Orb Factory, contended in her opening statement that Orb Factory, a successful company with more than 25 years of experience, has no need to copy Lisa Frank Inc.

The lawsuit focuses on only a handful of images that were cropped to appear more similar to Frank’s designs, Durham said. None of the images in question were designed by Binder and other artists at Orb Factory will testify they created those designs, she said.

Durham also said the details of the creatures in those images, such as hooves, manes, tails, and horns, are different. In addition, the packages are clearly marked with the Orb Factory logo.

Frank described the history of her company, beginning with her move from Detroit to Tucson to study art at the University of Arizona in the 1970s.

She founded a company called Sticky Fingers to make jewelry for kids, but renamed the company Lisa Frank Inc. around 1980. A $1 million order from Spencer Gifts led to mountains of stickers and a “craze” among children.

They sold leftover stickers of large-eyed creatures and unicorns as handouts for Halloween, she said. At the request of retailers, she started selling school supplies, which at the time were “just solid colors.”

In the past four decades, she estimated her company spent $50 million to $100 million on advertising.

Her company employed hundreds of people in Tucson for many years, but stopped manufacturing around 2012 and transitioned completely to a licensing model, Frank testified. Companies pay to put her brightly colored dolphins, gumball machines and tigers on their products.

The “look and feel” of Lisa Frank Inc. is still popular among children, and among adults who grew up with her images, she said.

“They were once little fans who grew up and had kids and loved the products as much as when they were growing up,” Frank said.

Frank said she is not claiming all images of unicorns or tigers are her copyrighted work. In the case of rainbow hearts, which other artists also have created, she said “when they combine it with a rainbow, a unicorn, an animal with big eyes, it looks like they were studying our designs.”

Under questioning from Durham on Thursday, Frank said she was not inspired by other artists.

“I feel like I’m very controlling with the look,” she said. “We have people who execute what I think of, but nobody really gives me ideas.”

When pressed by Durham, Frank said it is acceptable for artists to look to other artists for inspiration. She said she was “subconsciously” inspired by the pop-art movement of the 1960s, made famous by Andy Warhol and other artists.

Frank would not say how much revenue her company generated, which Durham said was necessary in a case involving monetary damages. Judge David C. Bury cut Durham off twice when she pressed Frank to divulge her company’s sales and revenue.

The trial is scheduled to continue next week.

Hers was a name most every little girl knew - Lisa Frank, creator of a line of vibrantly colored school supplies covered in hearts, stars and …

A Tucson woman faces three felony charges after police said she poured gasoline on a dog and part of a house and set them ablaze.

UA beat the Devils on Thursday night, pulling into a tie near the middle of the Pac-12 standings.

At least one gunman opened fire at a Houston-area high school Friday, killing eight to 10 people, most of them students, authorities said.

Steller Friday notebook: Did the cactus bring Amazon after all?

While Tucson wasn't chosen for Amazon's HQ, earlier this week officials confirmed an Amazon fulfillment center is coming to the Old Pueblo.

Tucson mom arrested in connection with her infant's 2016 death

The mother of a 7-month-old boy has been arrested more than a year after he died from severe head injuries, Tucson police say.

Lisa Frank is suing a toy company in U.S. District Court in Tucson for allegedly copying her copyrighted images of fanciful creatures. Frank’s designs are at left, with the other company’s designs are on the right.

Lisa Frank is suing a toy company in U.S. District Court in Tucson for allegedly copying her copyrighted images of fanciful creatures. Some of the toy company’s disputed designs are shown here.