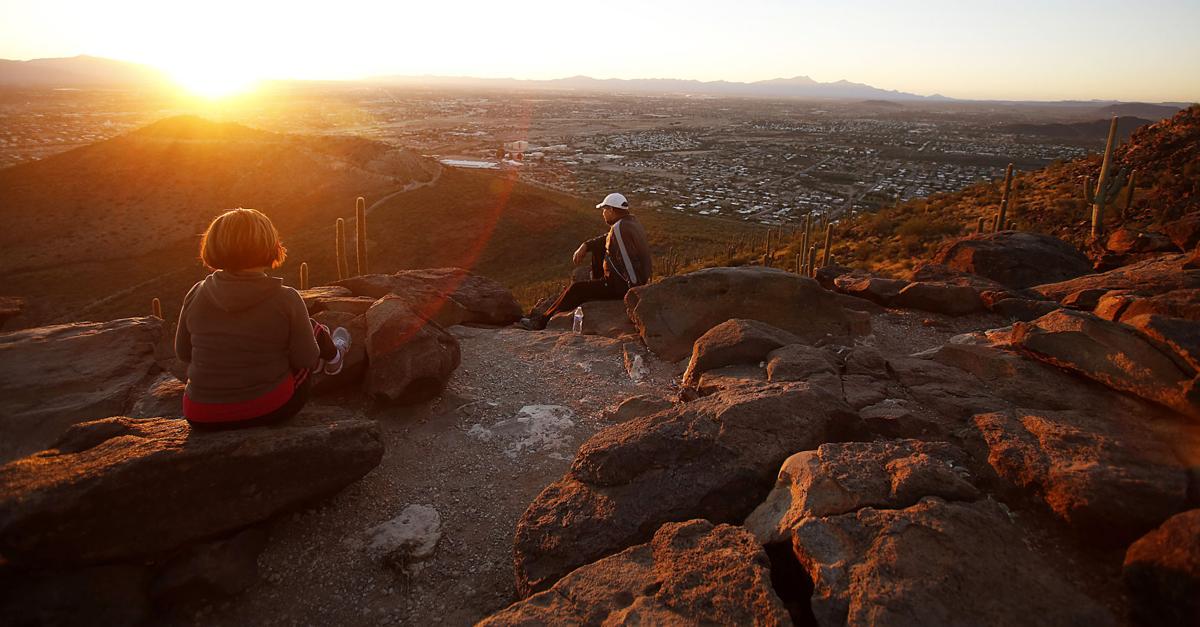 Laura and Armando Cornidez enjoy the sunrise from the top of Tumamoc Hill. A new cellphone app, in English and Spanish, will offer information about many aspects of the site. 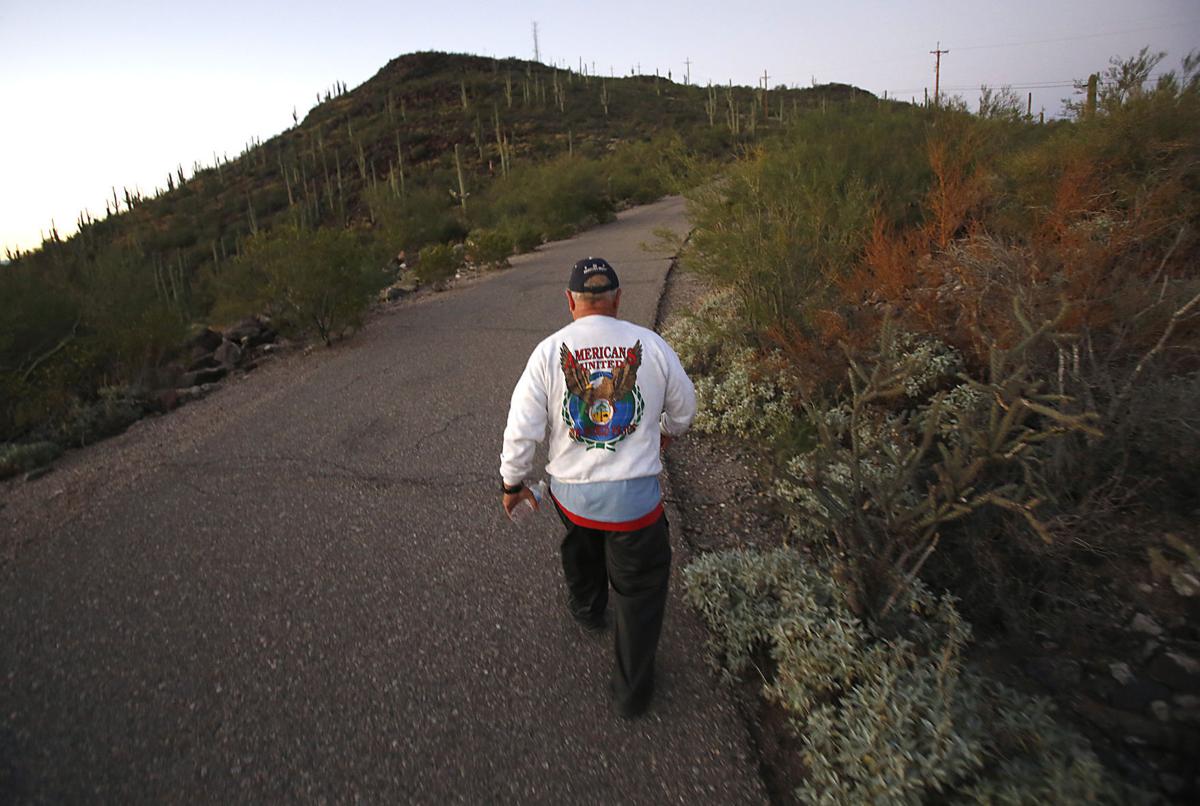 Willie Galvez, a Vietnam veteran, walks up Tumamoc Hill. The popular road is used by some 1,500 walkers every day. 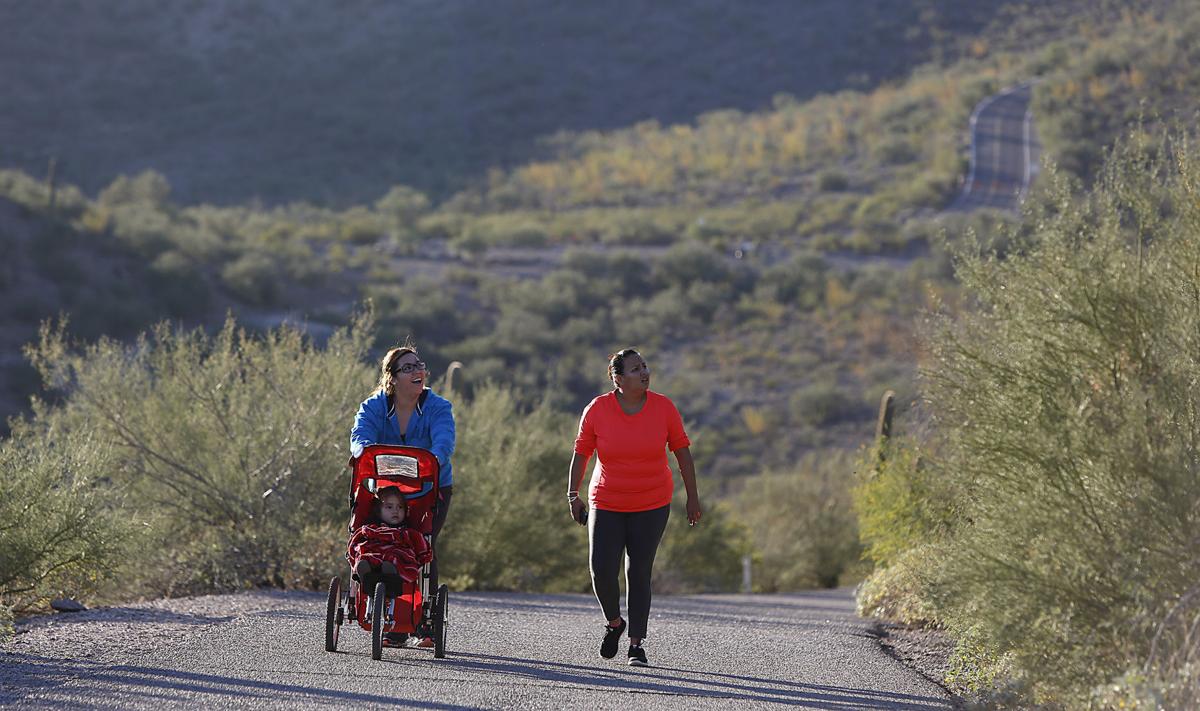 Renee Ramirez, left and Blanca De La Rosa walk up the first stretch of Tumamoc Hill as Ramirez pushes her daughter, Quetzali Castorena, 3, in the stroller in 2014. The women say they try to come at least once a week and they take turns pushing the stroller up the 1.5 mile hill.

Marta Ulehla and their son, Jura, walking down the road from Tumamoc Hill in 1925. St. Mary’s Hospital — and not much else — is in the background.

Tumamoc Hill, a favorite walking spot for Tucsonans, will expand the hours it is open to the public starting Sept. 5.

The new hours will be from 4 a.m. to 10 p.m. every day, giving walkers 18 hours each day to enjoy the scenic 1½-mile path. The change came as an effort to allow the community to enjoy the hike up the hill while also preserving the site’s scientific, natural and cultural integrity.

The west-side site will also include signs displaying the new hours of access and wire cables along the path and top of the hill where Ben Wilder, interim director of Tumamoc Hill, said the most damage to sensitive areas is being done. The cable fencing will be to prevent public access to areas beyond the walking path.

“With the increase of numbers in recent years, we’ve seen a very alarming degradation of the top of the hill,” Wilder said.

Tumamoc is an 860-acre ecological reserve and U.S. National Historic Landmark owned and operated by the University of Arizona in partnership with Pima County.

Before, the hill was closed to the public between 7:30 a.m. and 5:30 p.m. weekdays. This made it difficult for UA police to enforce rules, and for damage to be done at night.

“UAPD was ticketing grandparents walking with their grandchildren in the evening around 5 p.m.,” Wilder said. “Now, we’re kind of flipping that and trying to accommodate walking preferences if you want to go at sunrise, the middle of the day or evening.”

Over the years, Tumamoc has seen a dramatic increase in foot traffic.

“Tumamoc has seen over 4,000 years of human use (if you include settlement along the Santa Cruz) and has been a cultural gathering place for the valley of Tucson,” Wilder said. “This (current) migration of people is just the latest chapter in this story that’s been going for thousands of years.”

Tumamoc is a beautiful gathering place with a deep cultural history, Wilder said, and he sees it as an opportunity to let people see research in action. “But this is an ecological reserve, not a park.”

There are no pets, bicycles or smoking allowed on Tumamoc.

Walkers on Tumamoc will also have a new way to enjoy their strolls — a soon-to-be-released phone app that is similar to the one that supplements the drive up Mount Lemmon.

The app, for both Android and iOS devices, will feature six sections that are meant to narrate the hike up the hill.

The first section is an introduction and overview, followed by information on the desert laboratory site and history of the buildings. The desert lab buildings were built more than 100 years ago, and today, the glass in Wilder’s office is wavy with age.

Then the app walks listeners through the landscape, ecology and seasons of the desert.

At the top of the hill, the app delves into the archaeology of the site, including the history of the people who made the same climb thousands of years ago, and stories of the Tohono O’odham, descendants of the people who used to live on the hill.

There will also be 16 YouTube videos of additional content for those seeking a more thorough picture of the site.

The tour will be narrated on the app by Alberto Burquez, a researcher at the Universidad Nacional Autónoma de México, in Spanish, and David Yetman, a research social scientist at the University of Arizona Southwest Center, in English.

“The bilingual aspect of the community that uses the hill has been overlooked, so in terms of my tenure here, it’s one of the most important things to support,” Wilder said.

The music accompanying the app is by Calexico and Gabriel Naim Amor.

Signs have been installed on Tumamoc Hill to educate the public about the animals that call the hill home. Mamta Popat / Arizona Daily Star

Hundreds of people visit Tumamoc Hill every morning for the workout and great views of the city.

Benjamin Wilder wants Tumamoc Hill to be more than an 'interim' stop on his career.

Man was sentenced to 64 months in prison for the 2015 incident.

Tucson weather: Rising temperatures and no rain in sight

We've collected a few front pages from newspapers.com to give you a look at some Aug. 30 papers in history. With a subscription to newspapers.…

Tales from the Morgue: Wife turned him in for drunkenness

A woman showed up at police headquarters with her intoxicated husband in tow. She asked that he be locked up until he sobered up.

Sun Shuttle route changes are up for discussion

Report: State financial support for college students down 54% since 2008

Decrease in Arizona funding is about three times the national average.

His attorney says man was burglarizing his house.

Undersized Pittsburgh native was one of two UA players to earn a full ride this week.

Triple-digit temperatures could continue through next week.

Tucson the 28th worst city to live in? Investor website thinks so

Call it blasphemy, but a website for investors has decided that Tucson is the 28th worst city in the United States.

Public lectures, shows available for non-students at the UA this fall

The UA has much to offer this semester to the public.

Laura and Armando Cornidez enjoy the sunrise from the top of Tumamoc Hill. A new cellphone app, in English and Spanish, will offer information about many aspects of the site.

Willie Galvez, a Vietnam veteran, walks up Tumamoc Hill. The popular road is used by some 1,500 walkers every day.

Renee Ramirez, left and Blanca De La Rosa walk up the first stretch of Tumamoc Hill as Ramirez pushes her daughter, Quetzali Castorena, 3, in the stroller in 2014. The women say they try to come at least once a week and they take turns pushing the stroller up the 1.5 mile hill.

Marta Ulehla and their son, Jura, walking down the road from Tumamoc Hill in 1925. St. Mary’s Hospital — and not much else — is in the background.