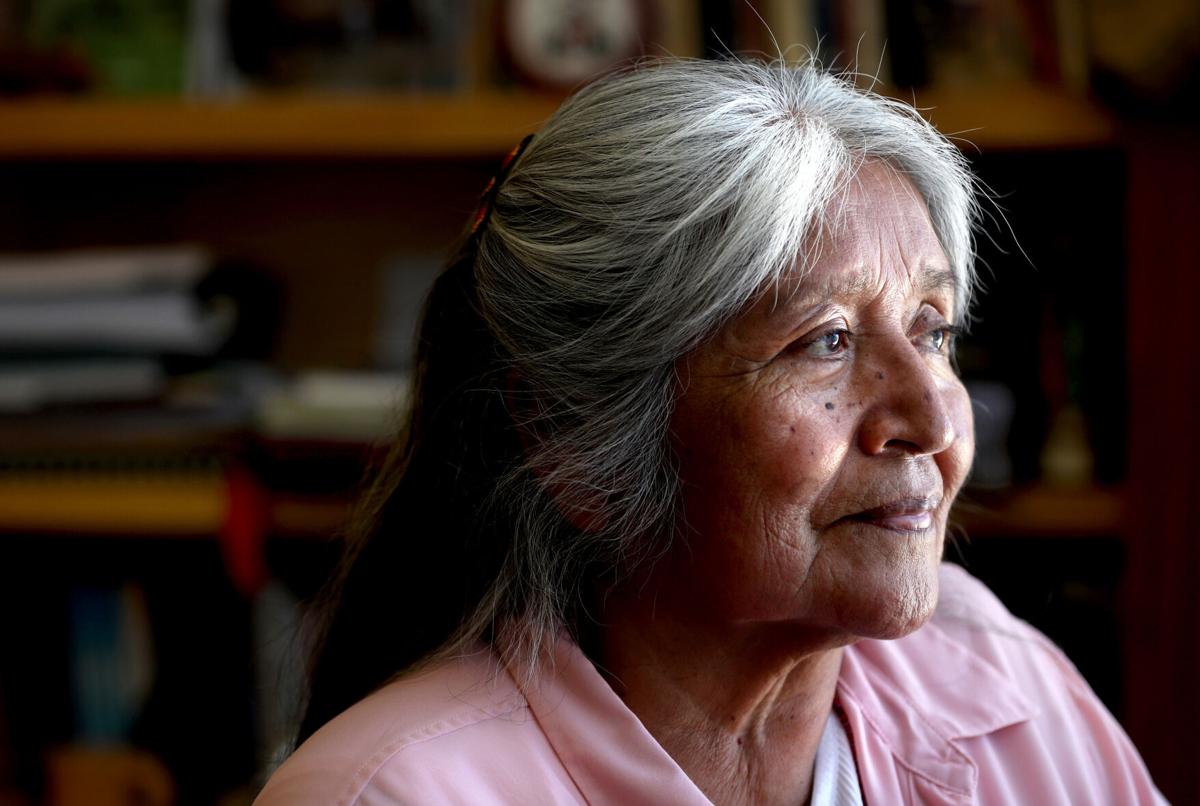 University of Arizona professor of linguistics Ofelia Zepeda sees language as much more than a tool to communicate. 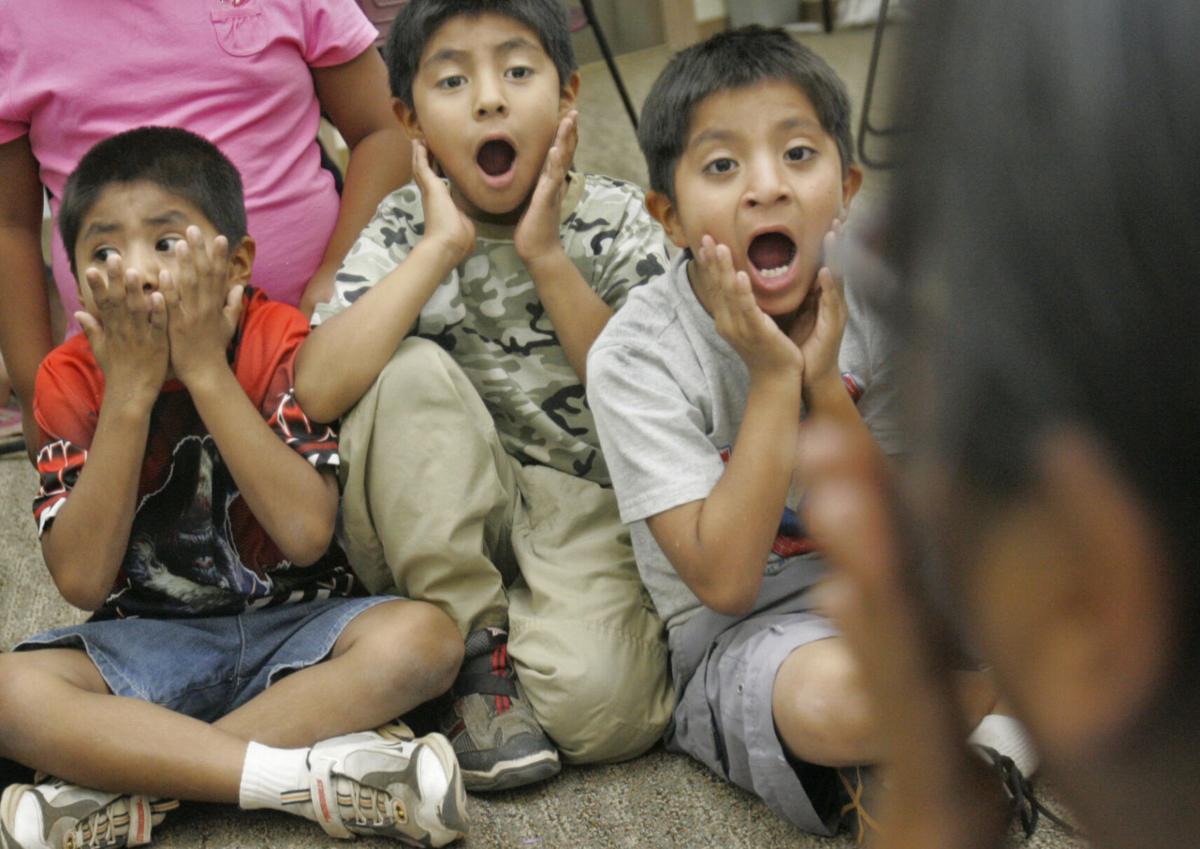 Children learn how to say 'ear' in Tohono O'odham language during a Language and Culture class taught by Delphine Saraficio at the San Xavier District Education Center in 2006. "Young people are not learning their language, but that's because the adults are not using it," said Ofelia Zepeda, American Indian Language Development Institute director and Tohono O'odham member.

To study a language is to study its people, and their connection to others, to animals and to nature.

“Maintaining a language isn’t just maintaining a form of communication, it’s maintaining a group of people or a people’s world view or social organization,” says Ofelia Zepeda, a linguistics professor at the University of Arizona. “A lot of it is held within the language, and that’s why it’s important to understand the connection between language and culture, or the way that people believe or behave or function. It’s sort of, all tied together.”

Zepeda says she sees language as much more than a tool people use to communicate.

“There’s lots of other information that is within the language itself,” she said. “It conveys information about how people view their world, their surroundings.”

Zepeda has been studying and writing the O’odham language since the mid 1970s, when she first moved to Tucson and stumbled upon her linguistics career after asking a professor to teach her to read and write O’odham. Her book, “A Tohono O’odham Grammar,” was the first grammar book about the O’odham language.

Born in Stanfield, a town formerly known for its cotton farming community west of Casa Grande, Zepeda never lived on the Tohono O’odham reservation. Her parents are originally from Sonora and eventually settled in Arizona where they worked in farm labor, she said.

Her poetry — like many O’odham songs, stories and prayers — focuses on the aesthetics of the Sonoran desert. It talks of the O’odham, rain, dry river beds, cactus, mountains.

In “Proclamation,” from her book, “Where Clouds Are Formed,” Zepeda writes in part:

Cuk Son is a story.

Tucson is a linguistic alternative.

The story is in the many languages

still heard in this place of

They are in the echo of lost, forgotten languages

heard here even before the people arrived.

Her lifelong work of teaching, studying and writing the language, first for educational purposes and later in the form of poetry, has not gone unnoticed. Zepeda’s work can be found on the Library of Congress website, where there’s a 2020 recording of her reading her poem, “B ‘o E-a:g maṣ ‘ab Him g Ju:kĭ” (in O’odham) or “It is Going to Rain” (in English). Her poetry was also at the Tucson Museum of Art until February, as part of “The Western Sublime” exhibit.

And some of her poems have been carved in stone along Mountain Avenue in central Tucson for more than a decade.

Zepeda was also recently nationally and internationally recognized for her work.

She received an honorary degree from Tufts University for the Class of 2021, joining U.S. Army General Maria B. Barrett, Ugandan physician Dr. William Bazeyo, Stacey B. Gabriel who is a leader in New England’s response to COVID-19, food entrepreneur and philanthropist Hamdi Ulukaya and civil rights lawyer Bryan Stevenson who received an honorary Doctor of Laws degree from the university.

Zepeda is also serving as the sole United States representative on the task force for the UNESCO International Decade of Indigenous Languages. She will serve in that role for three years, meeting with others involved in language preservation across the U.S. and in Canada to set priorities for the region, she said.

The regional groups will plan large scale programs to teach children and youth indigenous languages. They will also discuss advocacy for policy changes, funding requests and other ways to reach the goals they determine are a priority and necessary to preserve indigenous languages in North America.

“Ten years is, I think, enough time to create or start some policy changes either locally or nationally in the U.S. that impact indigenous people and language and education,” Zepeda said.

She believes the Tohono O’odham are in a good situation because several people in their 40s and older still speak O’odham fluently. Coupled with the increased awareness in recent years, these speakers can help boost efforts in keeping the language alive as the O’odham work to close the gap between fluent speakers and those who do not speak the language.

Zepeda said she feels privileged to be able to study her first language, and she is always discovering something new about the O’odham language.

“When you study the language, you’re allowed that kind of privilege to stand back and look at your own language, and you discover how it works, that it’s very sophisticated sometimes and then other times it’s very basic,” she said. “So it’s kind of like finding something new about your language every time.”

High temperatures during this span will range from 106 to 112 degrees in the Tucson area.

University of Arizona professor of linguistics Ofelia Zepeda sees language as much more than a tool to communicate.

Children learn how to say 'ear' in Tohono O'odham language during a Language and Culture class taught by Delphine Saraficio at the San Xavier District Education Center in 2006. "Young people are not learning their language, but that's because the adults are not using it," said Ofelia Zepeda, American Indian Language Development Institute director and Tohono O'odham member.