UA professor: Arizona could reach COVID-19 "crisis point" after Thanksgiving
Share this
1 of 2 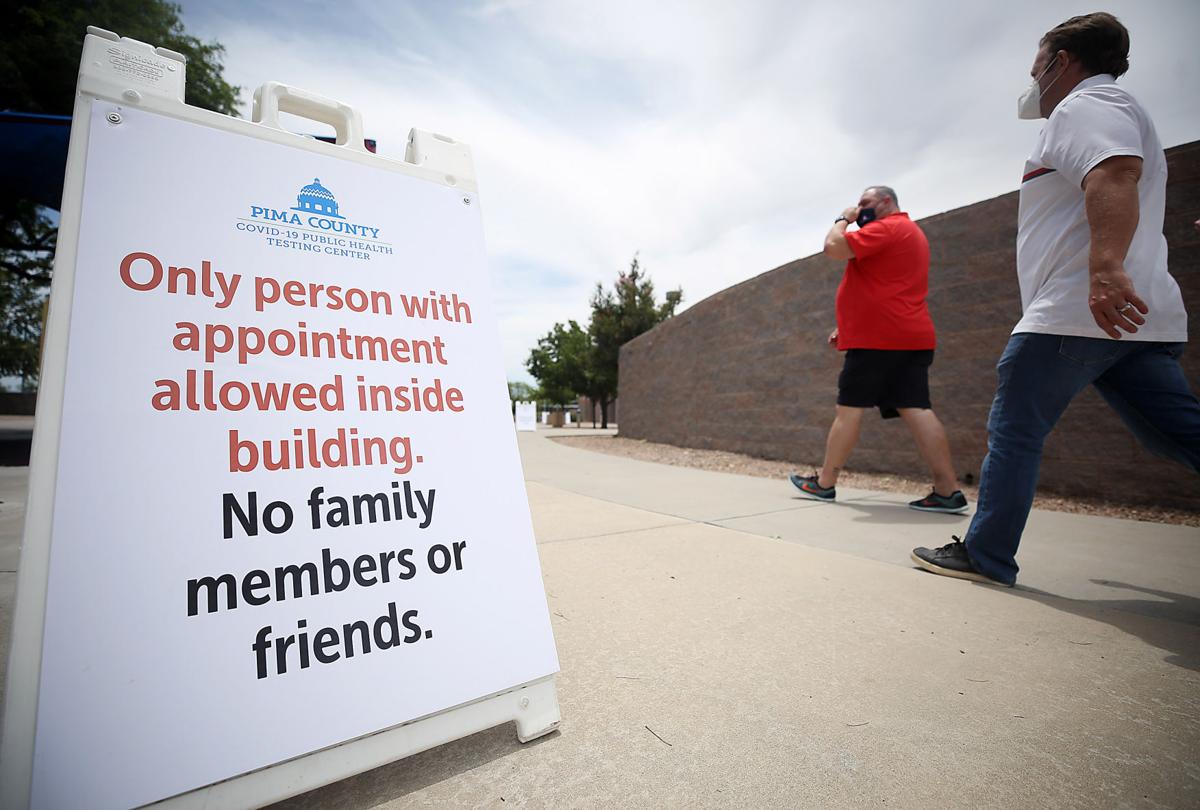 Hospitalizations have increased in Pima County in recent weeks, but they are well below the peak numbers from July. 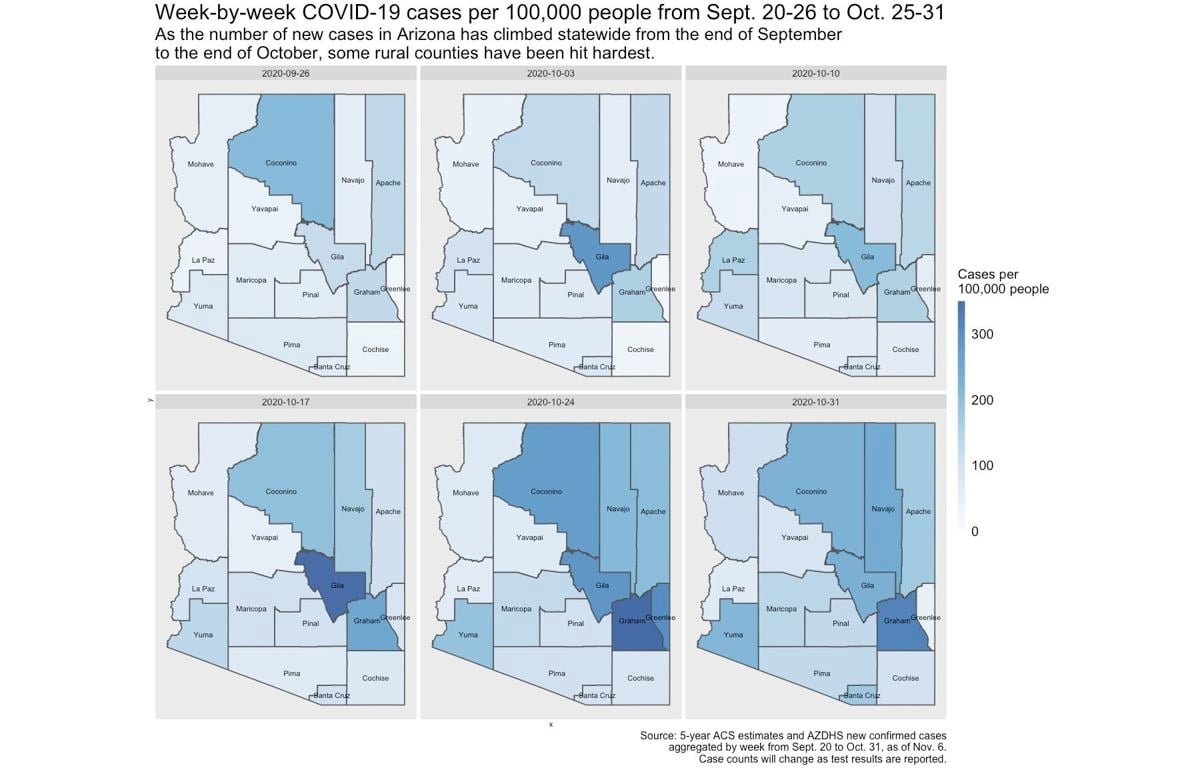 Coronavirus cases continue to rise in Pima County and Arizona, causing public-health experts to worry that conditions could grow dire over the holiday season.

“I don’t see us reaching any particular crisis point before Thanksgiving,” said Dr. Joe Gerald, an associate professor with the University of Arizona’s Zuckerman College of Public Health. “But once we hit Thanksgiving and move towards Christmas and New Year’s, I think we will eventually reach a crisis point.”

Total new cases recently increased from week to week by 32% in Pima County to 1,207, while the number of diagnostic tests increased by 11% from Oct. 18-24 to Oct. 25-31, according to the Arizona Department of Health Services’ chart of COVID-19 cases by date, as of Friday.

Over the same time frame, new cases increased statewide by 12% to 9,069, while the number of diagnostic tests conducted increased by 5%.

The percentage of positive diagnostic tests has also continued on an upward trend from week to week. It doubled in Pima County from 3% to 6% from the end of September through the last week in October, according to AZDHS data. And it nearly doubled statewide from 4% to 7% over the same time frame.

Dr. Francisco Garcia, Pima County’s chief medical officer, said the continuing increases are a result of community transmission. He said that he’s analyzed census tract data and addresses and found that there is no single locality that’s driving the increase.

“That’s the part that’s a little concerning and a little anxiety-provoking,” he said.

What he thinks is a large driver of the increase in cases is not only pandemic fatigue, where people get more lax on efforts to curb the spread of the virus, but also small gatherings.

“It’s interesting, because even as the school starts to open up, what we’re seeing in the school is not really school spread,” he said, adding that there have been exceptions of cheerleading squads, football and volleyball teams. “It seems like kids in the classrooms are relatively safe and relatively well. The cases that are identified and associated with schools are not acquired at the schools.”

A look at the first day of in-person classes at Copper View Elementary School as Sahuarita Unified District begins reopening efforts, on Sept.…

Despite the increase, he said that he feels Pima County is in a better position both compared to the state and nationally. That’s likely in large part because the demographic that is getting sick here is less likely to be hospitalized or suffer severe illness.

“I think that that’s the reason this hasn’t translated into deaths — at least not yet. It doesn’t mean that it can’t,” he said.

The counties in Arizona hit hardest in recent weeks have been rural ones. For example, Gila and Graham have had higher rates of COVID-19 cases, even though counties with higher populations, like Pima a Maricopa, have seen more cases.

Statewide, the percentage of general ward hospital beds occupied by COVID-19 patients has been increasing since September, Gerald pointed out in a report he published last week.

“Our Banner team has started having its weekly huddle again to talk about COVID,” Gerald said, referring to Banner Health, which is a hospital network in Arizona. “They’re seeing an uptick. And the other thing that’s kind of complicating the picture right now is we’re seeing transfers from out of state.”

Deaths have also been trending up statewide, albeit slowly, Gerald wrote in his report, adding that they remain well below rates in April and May. The deadliest week was in July.

In Pima County, the number of hospitalizations has also increased in recent weeks, but they are well below the peak numbers from July, Garcia said.

“I’m starting to get to the point where I think we’re going to be seesawing this way for a while until we reach a level of community immunity through vaccination,” he said. “I’m starting to wonder if this is what the new normal will look like over the next few months.”

In terms of further restrictions, Garcia said the state would be responsible for any stay-at-home orders. The county could enact some policies, like in terms of the restaurants or pools, but there’s no evidence that those are currently a big driver of community spread. That includes in-person schooling.

Americans have endured economic crises before but none quite like this. To capture the depths of the suffering, The New York Times teamed up w…

Lynda Jean Zimmermann will pay more than $1 million to the IRS as part of her plea deal.

The Arizona attorney general's latest brazen political stunt is to invoke environmental law to demand that the feds resume border-wall building. The suit's legal prospects are nil, but that's not the point.

SB 1456 ensures that parents know — and approve — what their children are being taught about in the classroom about sexual orientation, gender identity or gender expression, proponents say.

Hospitalizations have increased in Pima County in recent weeks, but they are well below the peak numbers from July.