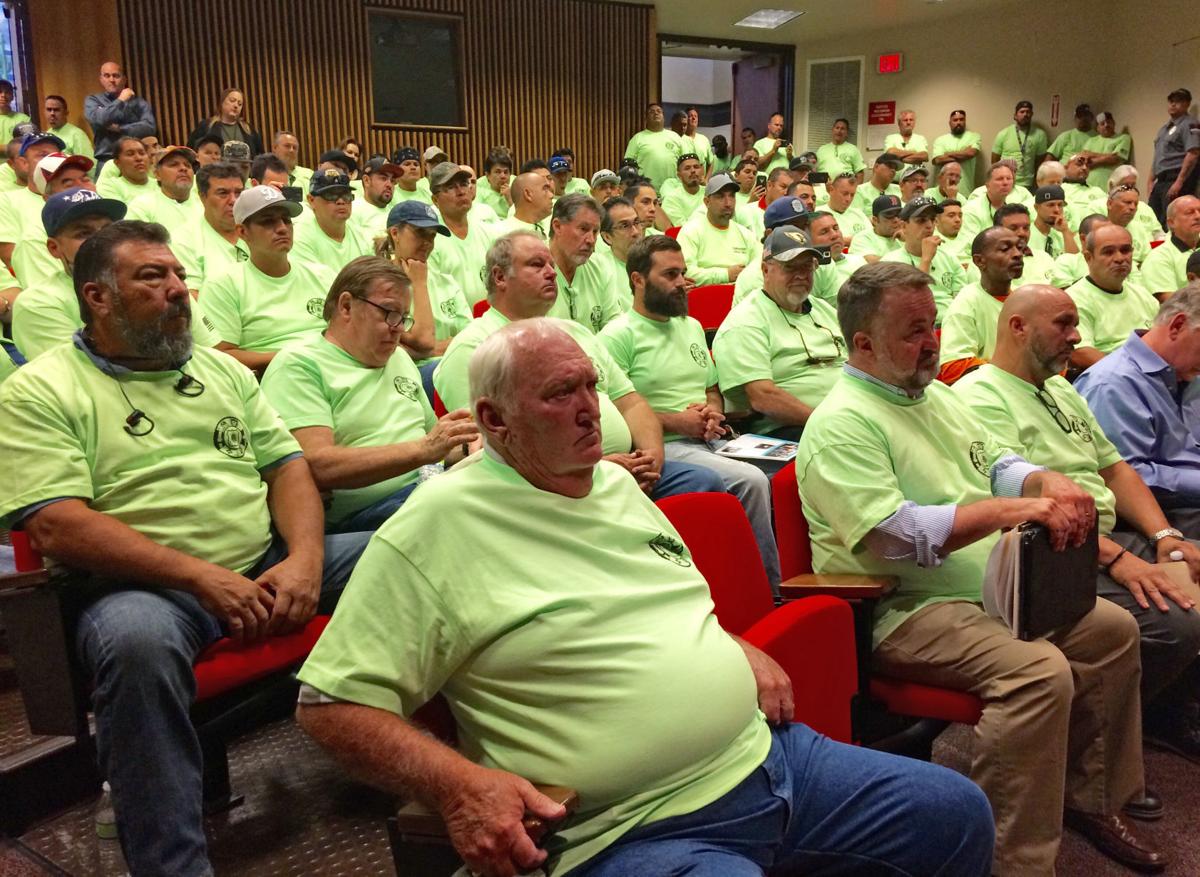 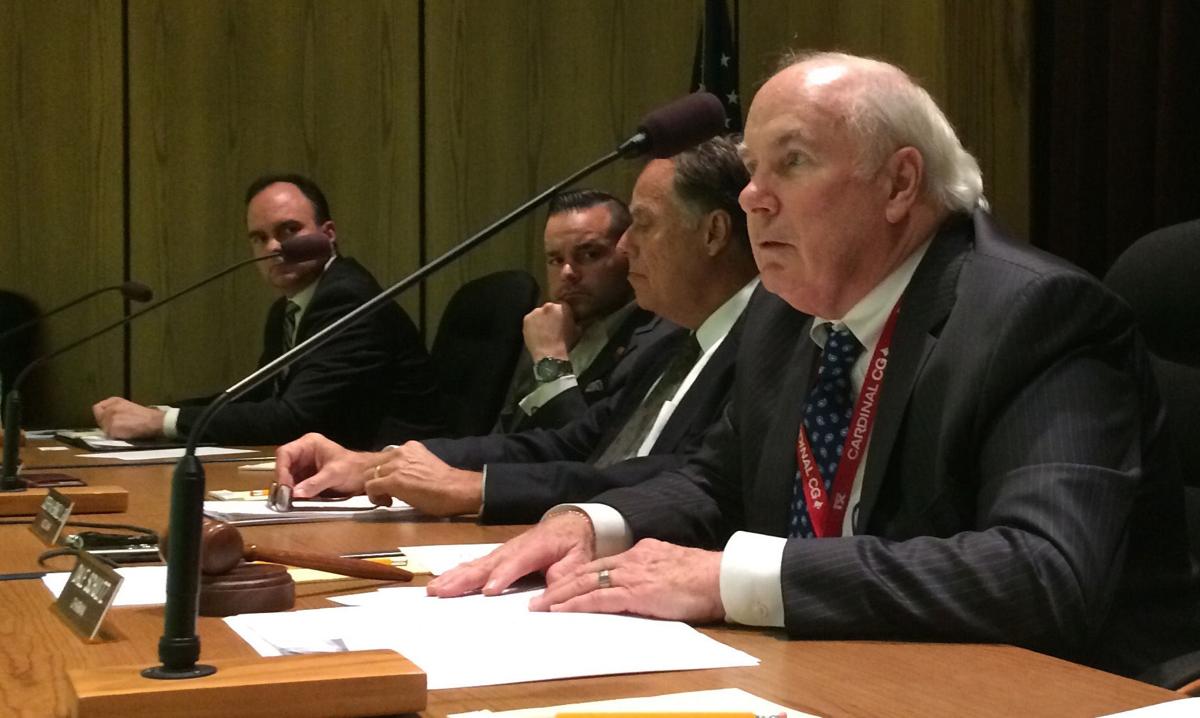 PHOENIX — Scores of frustrated union workers gathered in downtown Phoenix last week to confront members of the governor-appointed Industrial Commission of Arizona, whose unusual practices are under scrutiny from federal health and safety officials.

About 160 members of the Southwest Regional Council of Carpenters, dressed in neon-green union shirts, crowded into an auditorium during the ICA’s public meeting on Thursday. Commissioners moved the meeting to an auditorium to accommodate the crowd, which filled every seat in the room and spilled into the lobby of the ICA’s building at 800 W. Washington St.

The workers accused the ICA — which oversees the Arizona Division of Occupational Safety and Health, or ADOSH — of being too soft on companies that violate health and safety rules, at the expense of vulnerable employees.

They also criticized the commission for failing to aggressively pursue allegations of wage theft and fraud they say is rampant in Arizona’s construction industry. They described an underground, cash-only market in which companies pay workers under the table, avoiding taxes and dodging scrutiny of their hiring and safety practices.

“The black market for labor exploits desperate workers, creates the loss of tens of millions of dollars in tax revenues and perpetuates criminal activity,” said union member Steve Pasko at the podium. “How are legitimate companies supposed to compete and bid for projects when (others) are allowed to operate with impunity, due to the lack of enforcement by this commission?”

Pasko said the union is developing its own “payroll task force” to investigate allegations of fraud.

“In our industry, dishonest businesses commit on a continuing basis acts of wage theft, fraud and willful safety violations, putting the physical safety and financial well-being of our state’s workers at risk,” Sandez told commissioners. “Yet this commission has chosen to side with lawbreakers by reducing fines, watering down violations, rather than taking the appropriate actions demanded by law.”

Schultz vigorously defended the commission’s practices and the state’s worker-safety record, both in an Aug. 8 written response to federal OSHA’s investigation, and in his response to the workers who gathered last week.

“I appreciate your comments very much. I want to tell you that I do care,” he said to union members. “I’ve met with wives and families of workers who have been injured in the state of Arizona. … What we’re doing is having an impact.”

“Are you guys pleased with the way the federal government runs things? I’m not. They ask us to do things exactly the way they do it,” Schultz said. “We’re looking at other ways to address this problem.”

“On behalf of the carpenters, we’d appreciate it if you'd quit filibustering,” he said. “How many millions of dollars have been settled and pushed under the rug because it was politics over lives of the blue-collar man? I appreciate your response but at this time, the Arizona carpenters are walking away. We’ll be more than happy to meet with you at any other given date.”

The ICA reviews penalties exceeding $2,500 that have been recommended by ADOSH field inspectors. A Star analysis found that commissioners voted to reduce ADOSH’s recommended penalties in more than half of the cases they reviewed between January and November 2016. Those reductions happen after inspectors have already applied formula-based fine reductions, which take into account factors like violation history, company size and quick abatement of hazards.

The ICA’s second round of penalty cuts appears to be unique among OSHA programs, occupational safety experts told the Star.

Arizona is one of 26 states with a state-level occupational safety and health enforcement program. The program must be at least as effective as federal OSHA, or it risks being taken over by the feds.

Following complaints from the public, federal OSHA opened an investigation into the ICA’s practices last year. In May, OSHA issued its findings, which concluded the “arbitrary” penalty reductions undermine the deterrent effect of penalties and are not permitted under existing policies.

In his Aug. 8 written response, Schultz argued the commission does have the authority to adjust proposed penalties, even after ADOSH inspectors have applied reductions, which are calculated using a formula described in the field operations manual. He cited a 1992 update to Arizona’s state plan, which says the ICA can agree with the formula-based penalty, or “increase, decrease or delete the penalty after review of the pertinent facts.”

“OSHA has no record of raising any concerns regarding the 1992 Updated State Plan,” Schultz wrote.

Zachary Barnett, area director for federal OSHA in Arizona, told the Star last year that any commission penalty reductions are supposed to be based on doubt concerning “legal sufficiency” for the proposed citations or concern about whether the ADOSH inspection was conducted properly.

Federal OSHA’s investigation also found the commission was “operating outside of its legal authority” by reclassifying penalties — such as downgrading a company’s “willful” violation to a “serious” or “non-serious” violation — and directed the commissioners to stop the practice.

In his response, Schultz maintained the ICA is allowed to reclassify violations because the Arizona Legislature granted the commission “broad authority to exercise all powers necessary” to enforce health and safety statutes.

But Schultz said the ICA would stop reclassifying penalties until it can explicitly include the practice in Arizona’s state OSHA plan. Any changes to Arizona’s state plan will require federal OSHA approval.

Schultz objected to the suggestion that Arizona’s state plan isn’t as effective as federal OSHA, pointing to improvements in Arizona’s workplace fatality rate, which declined from 3.5 per 100,000 workers in 2013 to 2.4 in 2015.

Workplace injuries or illnesses in Arizona have declined fairly steadily from a rate of 4.9 per 100 full-time workers in 2005 to a rate of 3.1 in 2015, U.S. Bureau of Labor Statistics data show.

Schultz emphasized the ICA’s innovative approach to partnering with employers to improve safety: Its Voluntary Protection Program last year helped 40 employers proactively identify and fix work-site hazards without penalty, and its Public Entity Partnership Program focuses on safety awareness in the public sector, which is largely not covered by OSHA regulations, he wrote.

Arizona’s state OSHA program has a history of requiring pressure from the feds to aggressively enforce safety rules, said Peter Dooley, a Tucson-based workplace safety consultant with the National Council for Occupational Safety and Health.

In 2012, the Arizona Legislature relaxed fall-safety protection rules for residential home construction under 15 feet, prompting federal OSHA in 2015 to threaten to take over the state’s OSHA program if the requirements for fall-protection equipment weren’t restored.

Federal OSHA’s investigation “is a continuing indication that Arizona is failing its mission to ensure Arizona workers have a safe workplace,” Dooley said in a Friday email. “The Industrial Commission’s practice of weakening proposed classifications and reducing fines allows for arbitrary and capricious settlements with employers, with little or no active involvement of workers.”

José Mata drove from Yuma to join the union members at the ICA meeting last week. In 2011, Mata spent 17 days in a coma after safety violations at Western Precooling Systems resulted in an explosion of liquid ammonia. He told the commissioners the accident strained his family financially and psychologically as he recovered from his burns.

“My story is not the only story out there,” he said. “Are you gonna be there for us, or for the companies?”

Penalties for workplace safety violations get extra cuts in Arizona

Read the Industrial Commission of Arizona's Aug. 8 response to federal OSHA's investigation into the ICA's practices.

Read the ICA's response to OSHA's investigation into the commission's practices. This document contains the exhibits referenced in ICA chairma…

The governor-appointed Industrial Commission of Arizona has 30 days to respond to the findings, prompted in part by a Star investigation.

On the heels of revisions to Arizona’s occupational fall-protection standards, a national workplace safety report is calling for higher penalt…

The Community Foundation for Southern Arizona is moving to a larger location at East Broadway and Rosemont Boulevard.

A judge granted the injunction against harassment, based on 16 tweets by the journalist, who is appealing.

The move to strip Arizona of its enforcement authority would put OSHA in charge of enforcing worker safety rules that deal with everything from mask requirements to time off for COVID-19 testing.