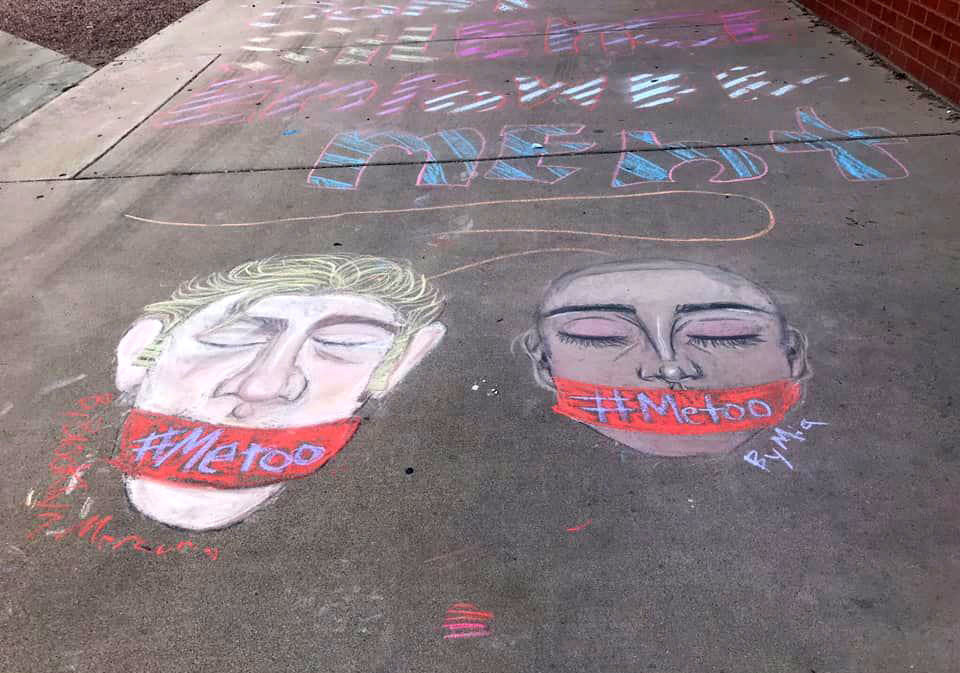 University High students made chalk drawings to show support for a peer who was pulled off the stage at poetry slam while attempting to read a poem about her sexual assault. 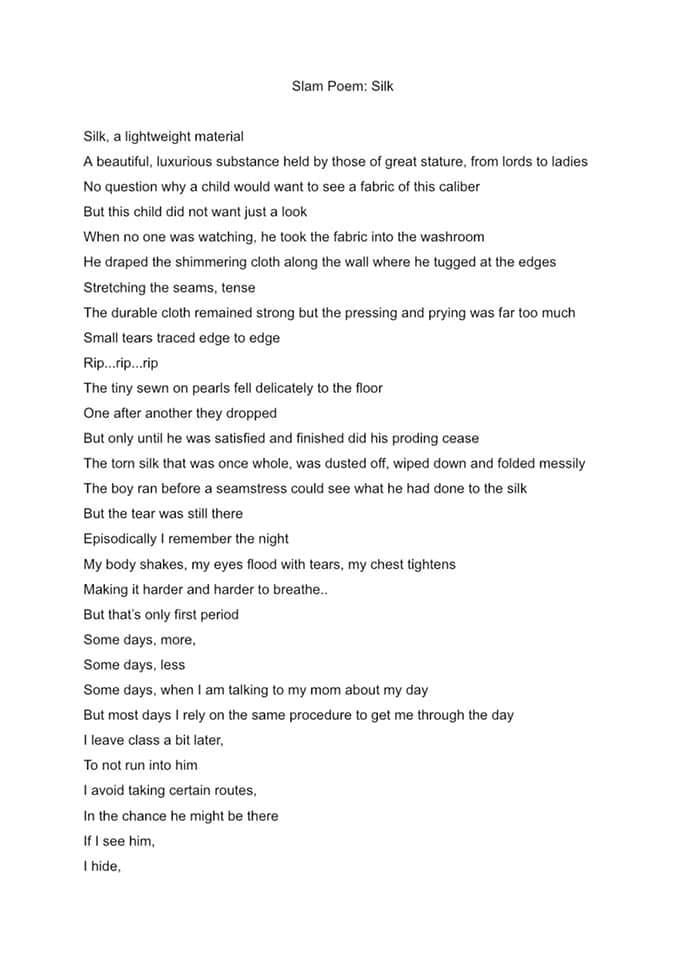 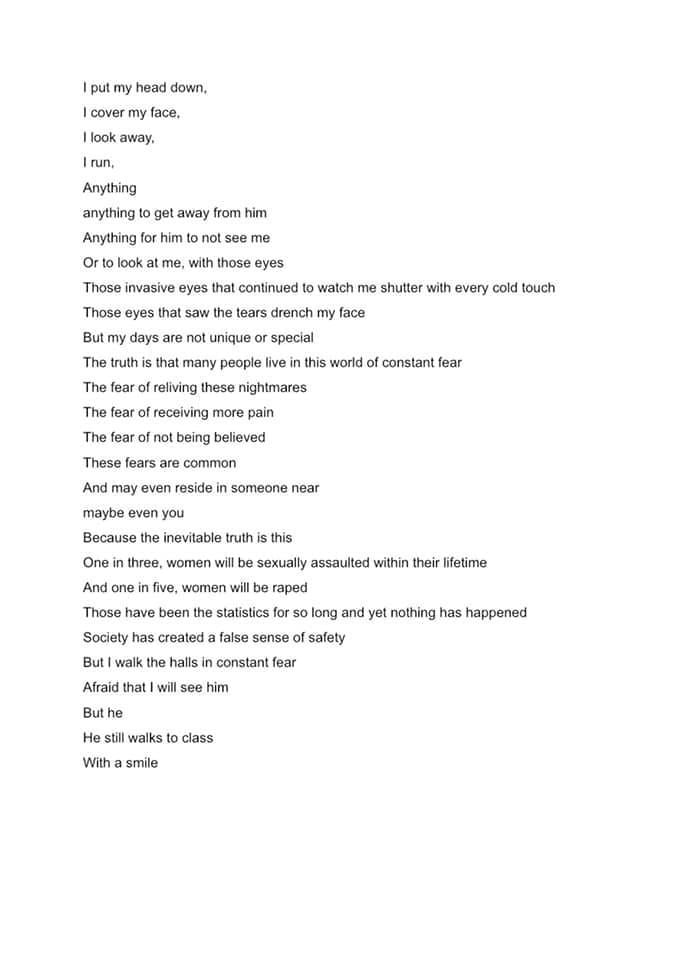 A Tucson high school is working to make its campus a safe place for students who have experienced sexual assault following an incident at a school event earlier this month.

University High School, in the Tucson Unified School District, will begin training faculty, staff and students about how to serve as victim rights advocates and create protocols for how reported incidents should be handled.

The training was announced in a newsletter sent by University High School Principal Amy Cislak to students and parents in response to an incident during a May 17 poetry slam on campus in which a student was pulled off the stage seconds after she started reading a poem about her sexual assault.

District officials declined to comment on the situation, saying the incident the poem was referring to is an active Tucson Police Department investigation. TUSD spokeswoman Leslie Lenhart said the district’s investigation is still open, pending completion of the police investigation.

“Please know that the school and the district are continuing to meet with the family to ensure the student is receiving all the support services needed. School and student safety is a top priority for Tucson Unified School District,” Lenhart wrote in an email to the Star. The Star does not typically name victims of sexual assault.

A video, posted to the student’s Facebook page the day after the poetry slam, shows the girl getting only a few words of the poem out before another student walks onto the stage and says something to the girl, pointing to the side of the stage. Moments later, the two walk off the stage to the sound of boos by other students.

A copy of the poem, called “Silk,” posted to the student’s Facebook page shows that it was deeply metaphorical and did not at any point name the girl’s alleged attacker.

“‪I want to discuss the hypocrisy found in my high school poetry slam,” the post accompanying the video said. “The winners discussed abortion, currently a very controversial issue, while others discussed the N-word, said words such as slut and whore. Mine was about sexual assault and rape.”

The girl’s post went on to say that the poem included nothing explicit about the incident.

“My poem was deemed inappropriate and rather than letting me know prior to my performance, they instead pulled me off stage, threatening my suspension if I continued,” the post said. “The same way I had been silenced by my attacker, my school further humiliated and silenced me from sharing my story.”

The student said the UHS administration is trying to “maintain their school’s image” and protect the attacker at her expense.

“This poem was created to empower myself, a way to regain my voice; the voice stolen from my attacker, my school and the administration,” the post said. “My voice matters and so does every victim of sexual assault because our pain is real and is not something that society can marginalize and ignore.”

Later that evening, at an Art Under the Stars event, UHS students and supporters of the girl printed chalk messages on the sidewalk expressing their dismay with the school’s response, including, “Dear Admin, Don’t silence empowerment.”

Cislak’s newsletter, sent Monday, May 20, said the off-campus incident happened during the fall semester and was reported to the school’s office, triggering the launch of an investigation. Cislak said in the letter that the investigation followed all legal and district protocols, the student’s poem described an incident that’s part of an open investigation and “presenting this poem during this time on school property was not feasible.

“Unfortunately, the communication as to why the student should not present was not articulated and the student opted to present her poem during an ‘open mic’ segment of the event,” Cislak said in the letter. “A teacher, noticing that the student was on stage when she was under the knowledge that her poem had not been approved to share, made the decision to pull her from the stage, believing wholeheartedly that she was protecting the student.”

While the action was well-intentioned, it embarrassed the student in front of her peers, the letter said, adding that the student was not threatened with suspension or discipline of any kind.

“It is heartbreaking that this student left on Friday feeling unsupported and unvalued,” Cislak wrote.

Cislak went on to apologize for the incident, saying it doesn’t reflect UHS’ values.

The event made it clear to Cislak that faculty, staff and students need more training “to support students who are the victims of similar experiences.” The letter never uses the words “sexual assault.”

Training will begin in the summer and the school will be sending out an invitation to “everyone in our community” to participate in founding a coalition that will create reporting protocols and campuswide training, the letter said.

When classes resume in the fall, they will host mandatory training events, with participants from the summer training helping to lead, along with highly trained facilitators, the letter said.

“These conversations MUST be ongoing throughout the year so that everyone on campus has support in handling these incredibly important, yet delicate conversations,” Cislak said in the letter, thanking the girl for her collaboration.

As of now, the training is only planned for the UHS community, but the district is reviewing the situation and may add it as a professional development training for all school leaders, Lenhart told the Star.

In a matter of months, 126 people were released from jail, saving more than $392,000 in taxpayer dollars.

Chet Maley received a natural life sentence, meaning he'll be in prison until his death.

The student's efforts include a scholarship contest that is entering its second year and resources to navigate sexual assault.

TUSD is updating its dress code with "gender-neutral" language.

Though children from lower-income backgrounds are more likely to drop out than those from middle and upper-class backgrounds are, the issue can affect any student.

University High students made chalk drawings to show support for a peer who was pulled off the stage at poetry slam while attempting to read a poem about her sexual assault.