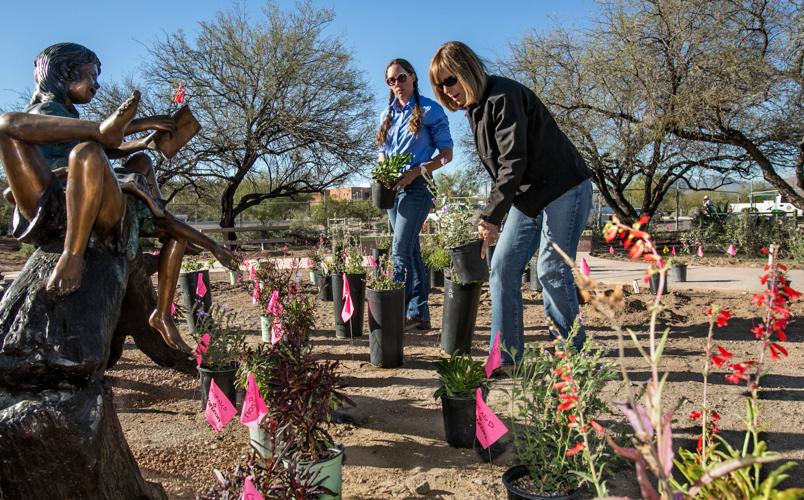 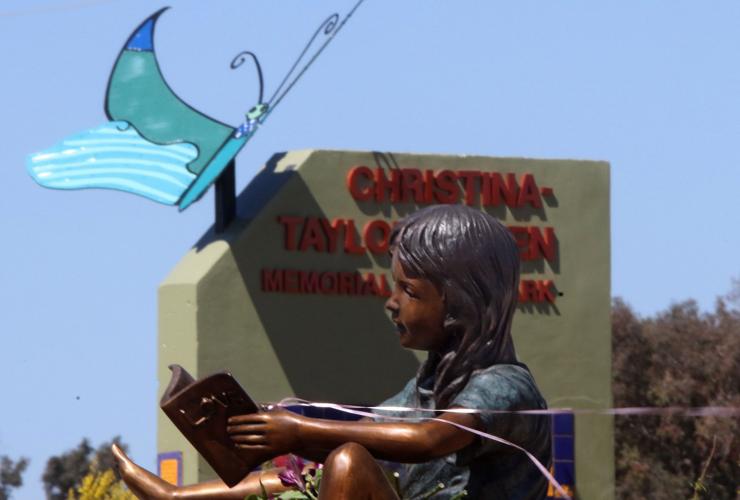 A steel replica of Christina-Taylor Green’s butterfly artwork is perched atop a freestanding wall. 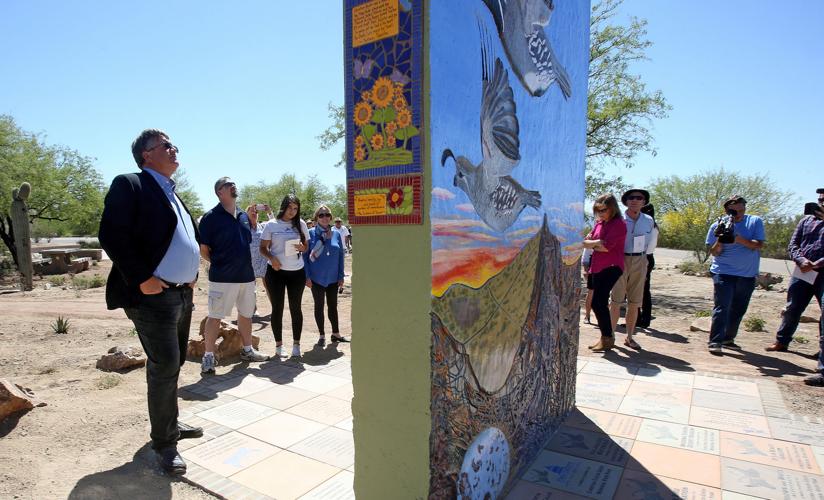 John Green pauses at the monument for his daughter at the dedication of Christina-Taylor Green Memorial Park in Tucson on April 2, 2017. The Green family, Pima County officials, donors and friends celebrated the opening of the park at North Shannon and West Magee Roads. Green was the youngest person killed in the January 8, 2011 shooting that wounded Congresswoman Gabrielle Giffords.

Christina-Taylor Green’s love of butterflies, evident in her colorful artwork, is now helping to restore a butterfly phenomenon.

The newly-upgraded Christina-Taylor Green Memorial River Park, named for the youngest victim of the Jan. 8, 2011, Tucson mass shooting, is playing a role in reversing the loss of monarch butterflies.

The migration route for the bright orange and black butterflies has been harmed by loss of habitat. The U.S. Fish and Wildlife Service estimated in 2014 that since 1990, nearly 1 billion monarchs had disappeared.

The numbers have come up a little since 2014, but not enough to assure the monarch butterfly’s migration for generations to come, federal officials say.

Scientists did not always think that monarchs passed through Arizona in significant numbers, but thanks to tagging programs they now know the monarchs pass through and may end up in Kino Bay, Sonora, in the mountains in central Mexico, and in California.

Citizen scientists have tagged more than 15,000 monarchs in the Southwest since 2003, with most in Arizona, said Gail Morris, coordinator of the Southwest Monarch Study.

The two-way migration of monarchs between Canada, the U.S. and Mexico, where they cluster each winter, has been called magical, spectacular and a “migration phenomenon.” But numerous factors, among them large-scale agriculture, the use of pesticides and insecticides and destruction of their habitat, have contributed to the monarchs’ decline.

Now, a “monarch way station” is part of the public-private Christina-Taylor Green Memorial River Park on the Tucson area’s northwest side, which held its official opening last month with Pima County officials following a year of fundraising by the Green family.

A monarch way station — a strategy developed by scientists and conservationists to support monarch migration and combat the butterflies’ decline — is a rest stop for monarchs to refuel and reproduce as they traverse the Sonoran Desert.

Last fall, the Southwest Monarch Study, along with Tohono Chul Park, planted a monarch way station at the Safeway shopping center where the Jan. 8, 2011, shooting occurred. This spring, larvae were spotted on the milkweeds for the first time.

“We do not have control over weather conditions that may also affect them and some other factors. But by planting milkweed, we give hope that with available host plants, we can help them expand their numbers and multiply,” said Morris, who is also vice president of the Monarch Butterfly Fund.

“If you plant it they will come, and that makes people more aware of the world we can have around us. And that naturally just leads to more interest in butterflies and other pollinators, whether it’s hummingbirds or bees.”

The way stations are designed with plants, primarily milkweed and nectar plants, placed to attract monarch butterflies along their migration route, explained Sergio Avila, a conservation research scientist with the Arizona-Sonora Desert Museum, which donated 110 plants to the Christina-Taylor Green Park.

“The (monarch) caterpillars only feed on milkweed, so that is why having milkweed is key,” Avila said. “Basically, how I explain it to kids, is we are building ice cream and pizza gardens for the caterpillars.”

The monarch way station came about by happenstance. Avila read a newspaper story in 2016 about the Green family’s plans to upgrade the county-owned Cañada del Oro swath of river park named for their daughter, who was a third-grader at Mesa Verde Elementary School when she was killed.

Included in their plans was a butterfly garden as a nod to Christina-Taylor’s love of butterflies. Avila took note. The Arizona-Sonora Desert Museum had already received a $100,000 grant from the National Fish and Wildlife Foundation to help create community monarch butterfly way stations across Arizona.

Avila called the Greens, and they immediately agreed a way station would be a fit.

About a month before she died, 9-year-old Christina-Taylor drew a picture of a green-and-blue butterfly during a school art class, with stripes, big dark eyes and large, open wings that point to the sky.

Her mother, Roxanna Green, did not see the artwork until after her daughter was killed.

“Butterflies are happy, free and colorful, and she was always fascinated by them,” Roxanna said. “When I see a butterfly, no matter where I am, it’s a sign. I always feel like it’s her coming to visit me.”

The Greens have since incorporated butterflies into their lives as a way of honoring Christina-Taylor, from a necklace her mother wears to a butterfly garden at their home.

In the upgraded park, a large steel replica of the Tucson girl’s butterfly artwork is perched atop a landscape mural on a freestanding wall.

Avila is proud of the park project. Not only will it be enjoyed by future generations, it is helping ensure a future for generations of monarchs and other kinds of butterflies, too.

“The mission of the Desert Museum is to inspire people to live in harmony with the desert,” he said. “This is mission accomplished.”

• Monarch butterflies are present in Arizona throughout the year. Where they are found depends on the time of year and the elevation.

• There are several varieties of milkweeds that monarchs favor in Arizona to lay their eggs, including desert, pineleaf, Arizona, antelope horns and vining.

• Monarchs usually feed on milkweed in bloom but they also favor the nectar of other flowers when they are breeding. In home gardens, adult monarchs frequently visit zinnias, cosmos, sunflowers, tithonia, coreopsis and asters.

•T he monarch breeding season in Arizona is complicated. Unlike many parts of the U.S., the lower deserts of Arizona see more breeding monarchs in the fall, especially during September, than in spring.

• Peak fall monarch migration in Arizona ranges from September through mid-October, depending on elevation.

• Monarch butterflies in Arizona migrate to both Mexico and California.

Source: "Status of Danaus plexippus in Arizona," a peer-reviewed study published in June 2015 in the Journal of the Lepidopterists’ Society. The study is a report on findings of the first 10 years of the Southwest Monarch Study.

The park's main entrance is at the southwest corner of Shannon and Magee roads, across the street from the Northwest YMCA, 7770 N. Shannon Road.

She collected pop tabs for really sick kids, now she is one.

John Green, left, pauses at the monument for his daughter at the dedication of Christina-Taylor Green Memorial Park in Tucson on Sunday. The G…

Arizona lawmakers to consider setting aside $2.5M for Jan. 8 memorial

The funding is contingent on the memorial becoming a dedicated national monument.

After 3 years of giving, Christina-Taylor foundation to close

For more than three years, the Green family’s dining room table has been dedicated to the foundation created in memory of an exuberant 9-year-…

The victims of the mass shooting at Safeway at Ina and Oracle roads north of Tucson on Jan. 8, 2011. Six people died and 13 were injured when …

The program works with offenders, families and victims.

The single day of activities that range from bike rides to Zumba has not only continued on an annual basis since 2012, regularly attracting upwards of 5,000 attendees, but has become its own organization.

Agency: Despite steep decline, monarch butterflies aren’t as endangered as other species

The U.S. Fish and Wildlife Service concludes that although the monarch butterfly warrants protection, dozens of other species face more urgent situations and have a higher priority.

President Biden says the 'second amendment is not absolute,' after Texas shooting

A steel replica of Christina-Taylor Green’s butterfly artwork is perched atop a freestanding wall.

John Green pauses at the monument for his daughter at the dedication of Christina-Taylor Green Memorial Park in Tucson on April 2, 2017. The Green family, Pima County officials, donors and friends celebrated the opening of the park at North Shannon and West Magee Roads. Green was the youngest person killed in the January 8, 2011 shooting that wounded Congresswoman Gabrielle Giffords. 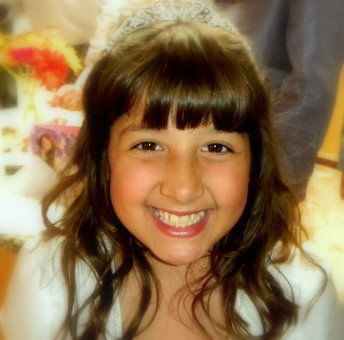