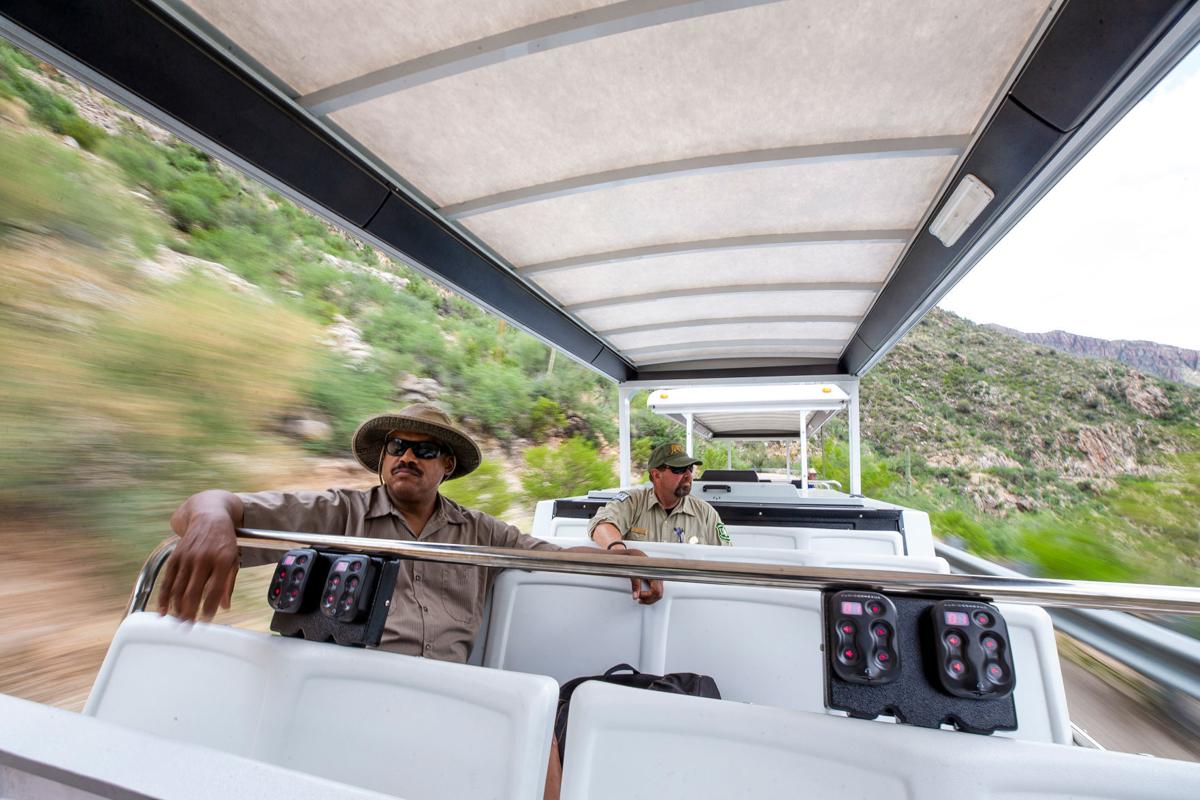 Troy Edwards, a shuttle driver in training, left, and Gary Youngling, a volunteer with Santa Catalina Volunteer Patrol, take a ride on the new electric shuttles at Sabino Canyon Recreation Area. Four other open-air shuttles are being tested by a California-based company. 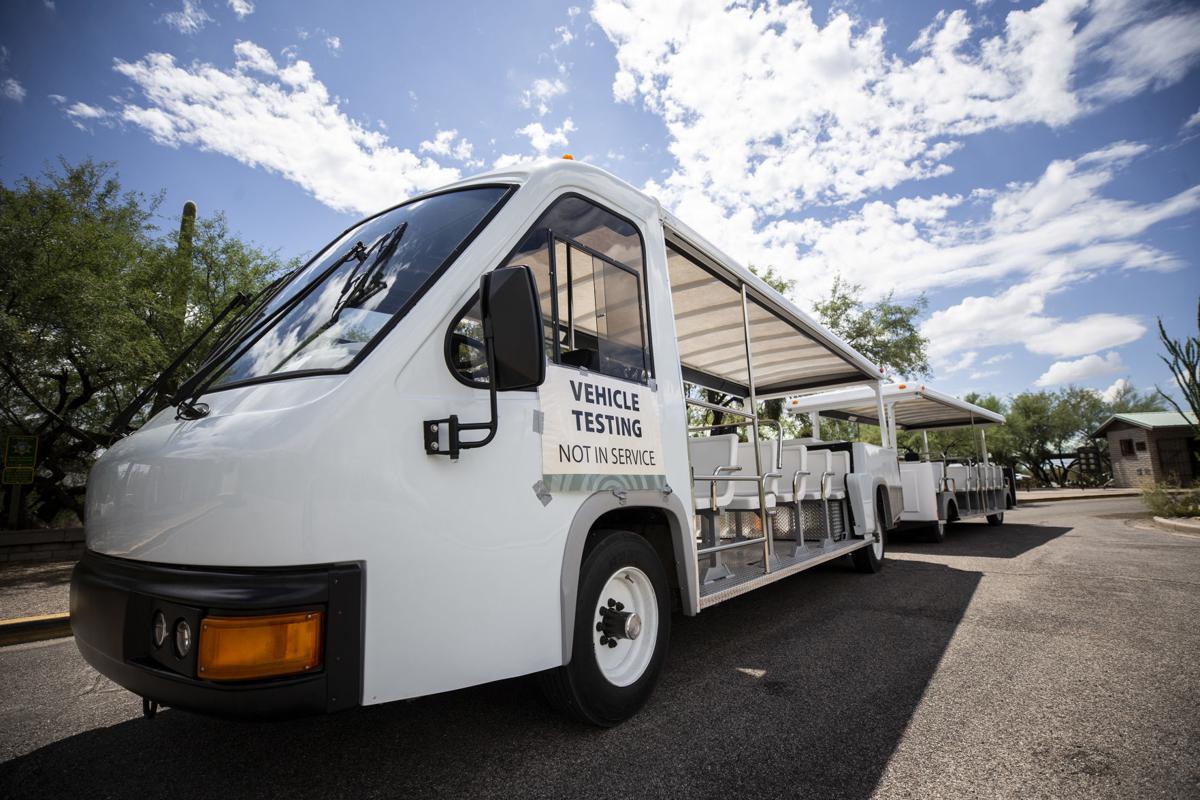 Coronado National Forest spokeswoman Heidi Schewel says the shuttles will have “headphones for the narrated educational program.” She also said a “program that’s already packaged” will replace drivers’ narration along the route.

A new fleet of zero-emission electric shuttles are closer to operating in Sabino Canyon, a destination that attracts 1 million visitors annually, an official said.

The first 62-passenger electric shuttle was tested Sept. 3 and is being used to train drivers along the routes through Sabino and Bear canyons, roughly 6 miles of travel.

Four other open-air shuttles are being tested by California-based Trams International, before providing services to approximately 100,000 annual riders, according to the Coronado National Forest.

“Based on what happens with those vehicles, there will be adjustments made to the vehicle here in Sabino Canyon and then those other vehicles will be coming in as they are ready,” said Heidi Schewel, a forest spokeswoman.

While officials believe the fleet will arrive this fall, an official date has yet to be determined.

When operational, the electric shuttles should provide “quieter” and more “efficient” travel seven days a week, according to Schewel. The shuttles will bring fully integrated ticket sales, including cellphone payments and credit- and debit-card sales for visitors. The previous shuttle vendor operated on a cash-only basis.

“Some people just like to ride up the canyon and return, some people may want to get off at one stop and walk to another stop, some folks may want to stop and have a picnic and then get back on later,” Schewel said. “It just gives people more options on what they can do throughout their day once they’ve purchased their ticket.”

Currently, tickets are available only at the ticket booth or touchscreen kiosk.

The educational program onboard is also changing.

“Another feature that they’re going to have is headphones for the narrated educational program, so people that are walking will not be hearing that bleed over from speakers,” Schewel said.

“The drivers aren’t going to be narrating the way they used to, this is a program that’s already packaged and ready to go.”

The program will be available in English and Spanish.

The project needed to supply power to the vehicle charging infrastructure was completed by Tucson Electric Power in April.

TEP has also contributed $1.5 million in startup costs and a $1 million interest-free, 10-year loan funded from its corporate resources, according to the Regional Partnering Center’s website.

The Regional Partnering Center, awarded a 20-year service permit in 2018, initially estimated the electric shuttles would launch by July 2019. It will eliminate the current use of four gas-powered shuttles in operation since March.

The 21-passenger shuttles were ordered for interim use after Sabino Canyon lost shuttle service in June 2018 when a service permit with Sabino Canyon Tours Inc. expired. The private concessionaire operated at Sabino Canyon since 1985, according to Arizona Daily Star archives.

Pima Association of Governments, which manages the nonprofit Regional Partnering Center, said shuttle testing “will continue periodically during operating hours prior to commissioning the new shuttles to provide tours at the canyon.”

Testing is underway for return of shuttle service to Sabino Canyon

A legal challenge to the selection of a new shuttle operator has delayed the transition.

The Forest Service is expected to make a final decision in February for a new 20-year permit.

Permit to operate Sabino shuttle to be opened for 'competitive process'

Forest Service looks to grant a new 20-year permit to operate trams in the scenic canyon.

Dry, hotter Tucson temps expected to close out the week

Wednesday will likely be the last day of the week we experience temperatures in the low 90s, according to forecasts.

A newborn is being cared for after being surrendered at a Tucson Fire station Monday evening, an official said.

Two years ago, having electric shuttle service in Sabino Canyon seemed like a faint dream for Paul Marques, then-president of Friends of Sabin…

Troy Edwards, a shuttle driver in training, left, and Gary Youngling, a volunteer with Santa Catalina Volunteer Patrol, take a ride on the new electric shuttles at Sabino Canyon Recreation Area. Four other open-air shuttles are being tested by a California-based company.

Coronado National Forest spokeswoman Heidi Schewel says the shuttles will have “headphones for the narrated educational program.” She also said a “program that’s already packaged” will replace drivers’ narration along the route.