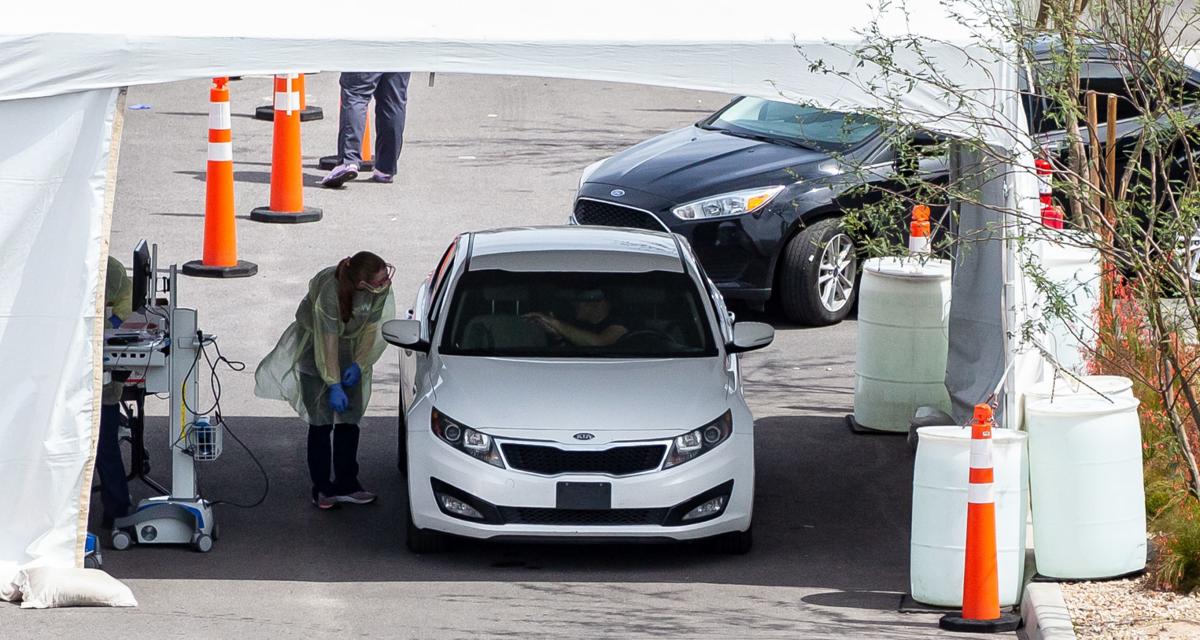 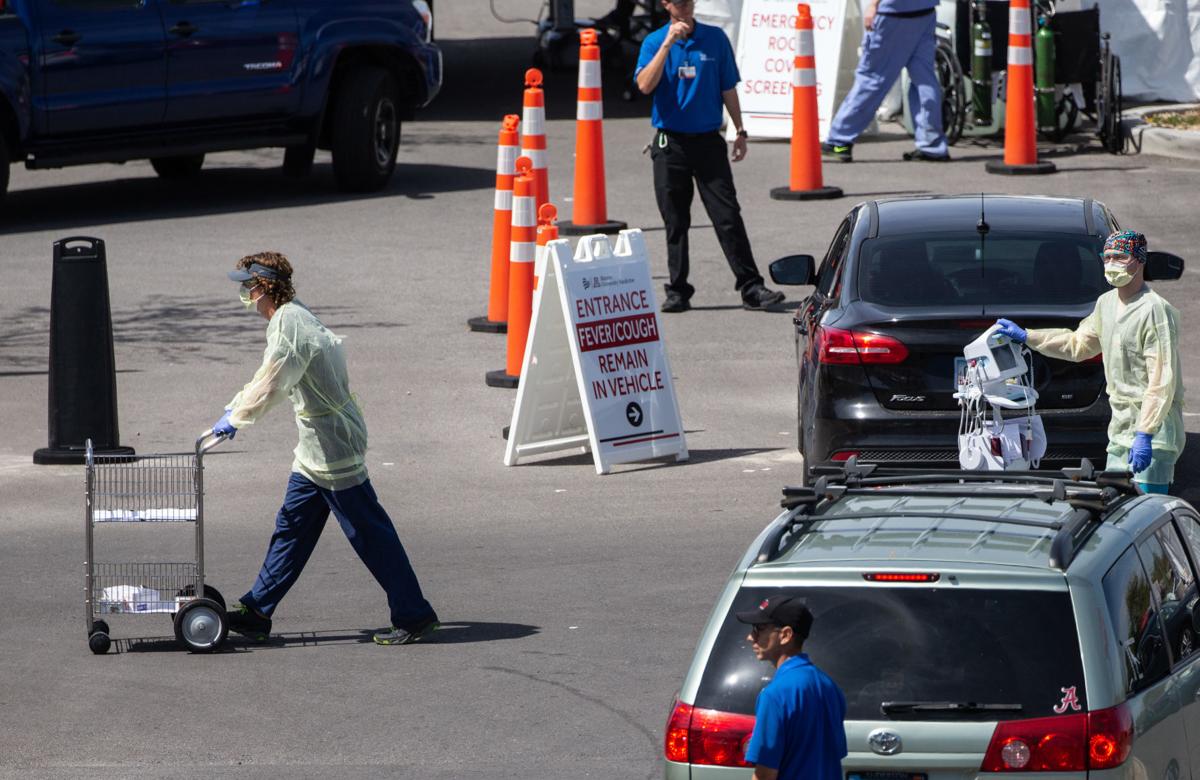 As the number of known coronavirus cases continues to increase throughout the state and the nation, Arizona health department officials say widespread testing is not critical for assessing the crisis.

It’s information Jessica Rigler, assistant director of public health preparedness for the Arizona Department of Health Services, hopes will ease anxiety about the lack of available testing due to supply shortages and other factors.

As of Friday afternoon, there were 63 known cases of coronavirus in Arizona, including eight in Pima County.

Widespread testing is not necessarily that important, she said, and the role of so-called drive-thru or drive-up testing for COVID-19 should be reserved mostly for health-care workers who are monitoring their health and for people who work with vulnerable populations.

Dr. Cara Christ, the director of the state Department of Health Services, said Friday that Arizonans should pretty much forget about getting testing to determine if they have the virus.

“We continue to face a national shortage of test collection supplies and lab reagents,” Christ said. “There are not enough tests at this time for everyone who wants to be tested.”

But she said that, for those who do not have extreme symptoms like difficulty breathing, knowing whether they have COVID-19 or something else won’t really help them.

“It’s important to be clear: There is no specific treatment for this disease,” Christ said. “And the result of a COVID-19 test will not change your clinical treatment while you are sick.”

There are now drive-up sites outside Banner-UMC Tucson and Banner-UMC South, but they are not for people to get random testing.

In other words, if a person is having any symptoms that require an emergency-room visit, they will be screened outside in their car. This is being done to protect patients and health-care workers inside the hospital.

People who suspect they have COVID-19 should call their doctor, or if they don’t have a regular doctor, seek out emergency care. The symptoms to watch for include ongoing dizziness, chest pain and breathing trouble.

Otherwise, Rigler said people who are sick with more minor symptoms should stay home and isolate until the sickness resolves. They do not need to get tested, she said. This needs to happen in coordination with communities practicing social isolation and other ways to prevent transmission, such as regular hand-washing.

In Pima County, Banner is currently the only one that offers drive-thru testing for COVID-19, but the criteria for testing is limited, and an appointment is required before anyone can be screened.

Arizona is working on a federal resource request for more ventilators and is also assessing staffing capacity across the state to make sure there are enough qualified professionals to operate the equipment, although Rigler could not say when that request will be ready.

According to Rigler, the shortage of medical supplies is just one of the reasons why they are discouraging widespread testing of people who aren’t experiencing serious symptoms.

They also need to save the protective gear used by medical staff during testing. That same protective gear is in short supply and needs to be saved for patients who will need emergency care and intensive care.

“We know we will probably not receive everything we need from the federal government and the supply chain is not as robust as it could be,” she said. “That’s why we need to work together.”

On top of the shortage of testing kits, medical professionals also don’t have the supplies needed to collect samples, including nasal swabs. According to the Centers for Disease Control and Prevention, the swabs have to be long and skinny enough to get to the nasopharynx — the upper part of the throat, behind the nose — and must be made of synthetic fiber.

“What we’re really focused on is making those resources more available in Pima County,” said Aaron Pacheco, community relations program manager at the Pima County Health Department. “The main need that we’ve identified at this point is not necessarily testing capability — these labs are capable of doing them — it’s really the supplies to do and collect the samples.”

As more screening and testing is done, there is also an increased chance that the state will see a backlog of testing kits, which is why more labs are being set up to do the testing.

In Flagstaff, the Translational Genomics Research Institute is now testing for the coronavirus, which will help boost the state’s testing efforts.

The likelihood of laboratories getting more backup as testing increases is a very real concern, Rigler said, and that’s why the state is validating more labs to do testing right now. Overall, she said, Arizona will be keeping the state lab free for priority specimens from people who are the most vulnerable to severe complications of the disease.

Possible respiratory infection? What to do

Feeling a respiratory infection setting in and wondering what to do?

Symptoms of COVID-19 that may appear two to 14 days after exposure are fever, cough and shortness of breath, according to the Centers for Disease Control.

Dr. Bob England, director of the Pima County Health Department, offers these guidelines and information, which could change if the known COVID-19 cases increase to a much higher level here:

• Gauge how sick you are and take it from there. If you feel sick enough that you would have gone to a doctor before the COVID-19 outbreak, call ahead and see if your doctor can provide testing or get you tested for influenza.

• If you are experiencing respiratory symptoms that are alarming, it’s still more likely to be influenza than COVID-19. Contact your doctor and discuss your symptoms. Getting tested for influenza quickly will help you get antiviral medication that will help ease symptoms.

• One of the primary objectives right now for the community is to keep people out of the emergency rooms unless they need to be there. Make phone calls first unless it's an actual emergency. One thing to watch for is shortness of breath.

• If you do go to your doctor, be sure to call ahead so they can put a mask on you as soon as you get to the office.

More on the outbreak

Other factors Jessica Rigler, assistant director of public health preparedness for the Arizona Department of Health Services, wants the public to know:

University of Arizona makes 1,600 coronavirus test kits for local use

UA researchers made 1,600 coronavirus test kits over the weekend, amid a nationwide shortage, and plan to make thousands more.