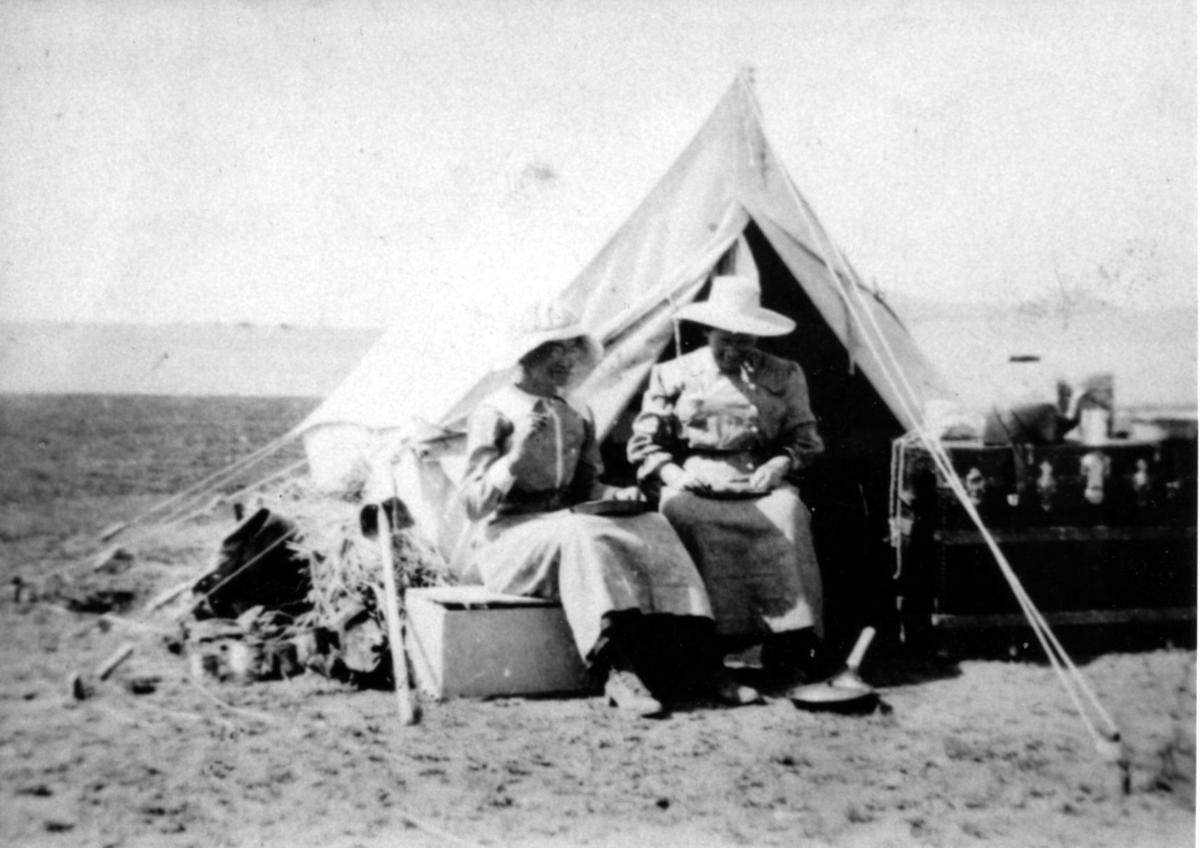 Carrie and Rhoda Swigart on their land shortly after they arrived in 1913. They got the last two parcels available. 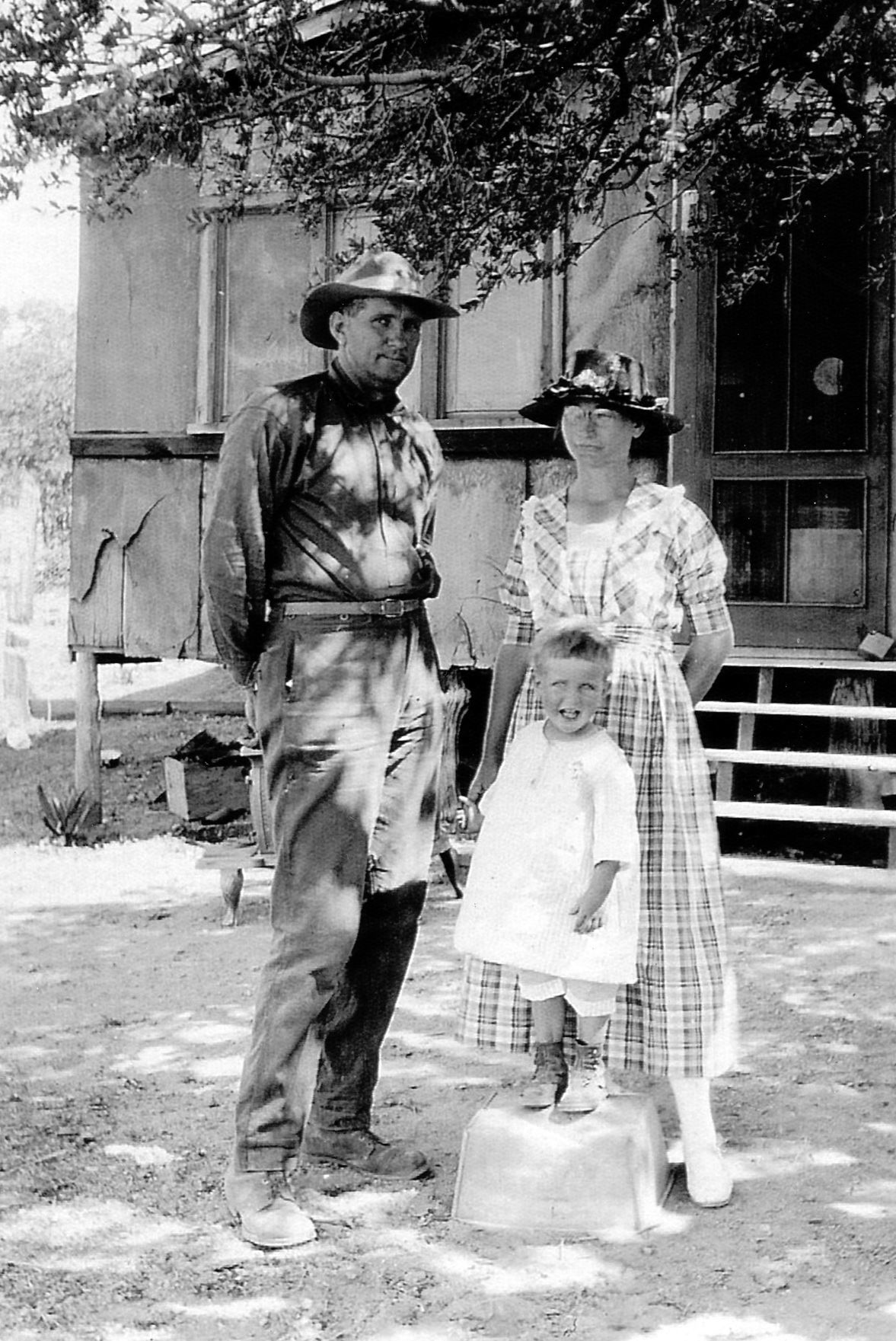 In 1913, Carrie and Rhoda Swigart followed their younger sister Esther to Arizona after hearing glowing reports of free land just waiting to be filled with succulent crops and grazing cattle.

The land was going fast, and Esther urged her sisters to hurry if they wanted to file on the few remaining 160-acre home sites near her property in the Southeastern Arizona community of Elgin. By the time the women arrived, only two parcels remained.

With others interested in the property, the sisters hurried out to the site, set a cot on each side of the land surveyor’s stake that straddled the two properties, and became squatters until they could officially file their claims. A few months later, they discovered both cots were on the same piece of land, but by then they had acquired title to the adjacent sites.

The Homestead Act required the sisters to plant crops to prove up the land. Coming from the East with scant farming experience, the novice settlers had their hands full those first years.

Carrie and Rhoda Swigart were born in Pennsylvania — Rhoda in 1870 and Carrie following 11 years later. Rhoda was a nurse and Carrie a legal secretary when they decided to forego their comfortable lifestyles and head west.

The arrival of two “spinsters” in the middle of the Arizona desert immediately attracted attention. The day after their arrival, bachelor ranchers appeared bearing gifts and to check out their new neighbors. The women acquired much-needed cooking pots and wood to heat a donated Dutch oven. The attentive suitors built a fence around the sisters’ small tent that was just large enough for their two cots. A piece of canvas stretched over a couple of poles allowed some protection when they cooked outside.

Fresh rabbit or a tasty hunk of beef took the place of flowers and candy when the men came calling. According to Carrie, “All the men kind of dressed up in their best when they came to see us. They’d come with their white collars on, even their best clothes.”

The first crop the sisters put in was pinto beans, but they found the going rough with no irrigation and soil so hard it was barely plowable. Carrie learned to pull the beans and thrash them against a canvas, while Rhoda, allergic to the dust, did the housekeeping. They eventually added a type of corn called mila maize to their crops and sold what they did not use in Benson.

The women learned to make jellies from abundant wild grapes that permeated the area. Manzanita berries were turned into pies, while small native walnuts went into cookies. Pigweed, an edible flowering vegetable plant native to the southern part of North America, became a staple on the sisters’ table.

The women knew they could dry farm, but needed a water source for cooking and cleaning. With no horse of their own, they paid $1 a barrel to have water for cooking hauled from a well three miles away, and they lugged dirty laundry on their backs six miles to sister Esther’s house to use her well water for washing.

Eventually, each woman built a house on her site. Carrie acquired an extra pair of hands, since nearby homesteader Jim Fraizer willingly spent all his spare time helping the petite, attractive woman.

On Oct. 1, 1915, Carrie and Rhoda legally staked their claims. By now, the smitten Jim had proposed to Carrie, but in order to keep both of their homesteads, the couple had to decide on which property to live, file on that site, and then get permission to marry from the government before proving up their claims.

They chose to live on Jim’s property since he had a working well, but he lived a typical bachelor lifestyle.

The dugout he called home was made from green oak poles covered with dirt, and the roof leaked so badly that he tied a dishpan over his bed to keep dry — not a hospitable sight to a prospective bride. There was also the dilemma that a woman could not file on her claim after she married because her name would be different.

The government did not make it easy for young lovers.

Carrie and Jim married Oct. 20, 1915. That November, Rhoda married rancher John McCarty. John moved onto Rhoda’s property because by now, Rhoda had dug a well. The McCartys went into the cattle-ranching business.

Jim used the wood from Carrie’s original house to build a proper home on his site. In November 1915, Carrie purchased the first stock that started their cattle herd. Through the years, the couple acquired 6,000 acres on which to run their stock.

Carrie eventually added dairy cows that produced enough butter to make them a profitable commodity. Jim, who worked as a carpenter and mechanic at Fort Huachuca, sold butter and eggs at the fort.

In 1919, Samuel Fraizer was born and in 1922, daughter Jean was added to the flock. Rhoda and John McCarty never had children.

Through the years, the Fraizer and McCarty families thrived and became an integral part of the community.

In 1946, when the movie “Red River,” starring John Wayne, began production at the Empire Ranch near Sonoita, Jim enjoyed playing the role of a trapper, while Carrie landed a smaller role.

The following year, the Santa Cruz County Cowbelles were formed with Carrie a charter member of the group dedicated to growing and developing the cattle industry and promoting friendship and respect among members of the cattle-ranching community.

Rhoda Swigart McCarty died in 1946, followed by her husband, John, in 1949. On Dec. 15, 1955, Jim died from injuries sustained in a fire several months earlier. Son Sam and his friends helped out during roundup, but Carrie continued to run the ranch on her own, just as she and Rhoda had done in those early years.

Carrie Swigart Fraizer died on Christmas Eve 1973, at the age of 92.

Jan Cleere is the author of several historical nonfiction books about the early people of the Southwest. Email her at Jan@JanCleere.com. Website: www.JanCleere.com

Special thanks to Betty Barr and Janet Rowley Thompson (Carrie Swigart Fraizer’s granddaughter) for their assistance with this article.

She's credited with reviving ancient pottery designs, redefining them with her own imaginative techniques.

On several occasions her businesses in Tombstone were destroyed by fire.

First female state auditor, she ran unsuccessfully for governor in 1950.

In the photo, the 81-year-old McCain and his wife sit in wood chairs near a creek and their dog rests at the couple's feet.

A small dog named Lovely who Tucson police say was doused with gasoline and set afire along with part of a house earlier this month has died, …

Study: Tucson is the 4th most affordable city for college students

Off-campus housing prices are cheaper in Tucson than most of the country.

Reports of coyote being aggressive toward cyclists along The Loop

Most of her family killed in arduous trek west.

The U.S. Interior Department awarded her a bronze medal for her dedication to the education of Hopi and Navajo children.

Carrie and Rhoda Swigart on their land shortly after they arrived in 1913. They got the last two parcels available.