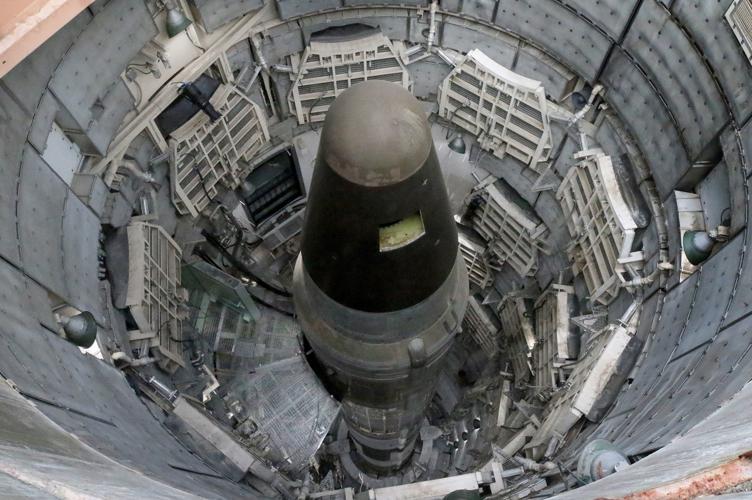 At the Titan Missile Museum in Sahuarita, visitors get a glimpse into what it was like to work in the facility during the Cold War. On the Director’s Tour, visitors can touch the missile. 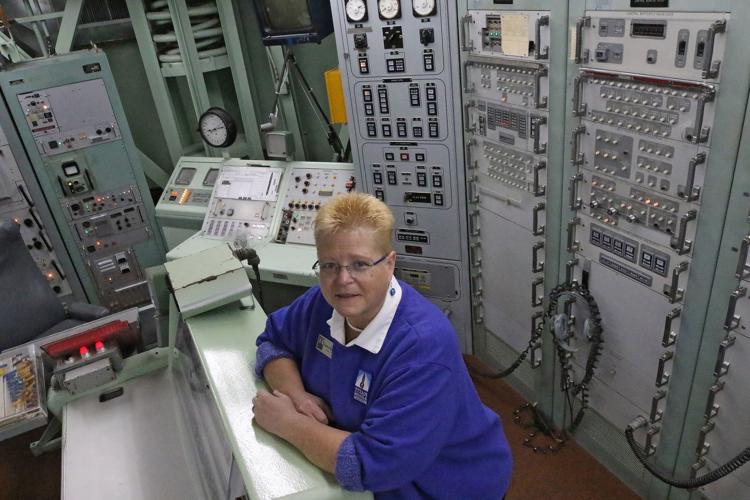 Yvonne Morris, the director of the Titan Missile Museum, presents the Director’s Tour on the first Thursday of each month. She worked 24-hour shifts at the site from 1980 to 1984. 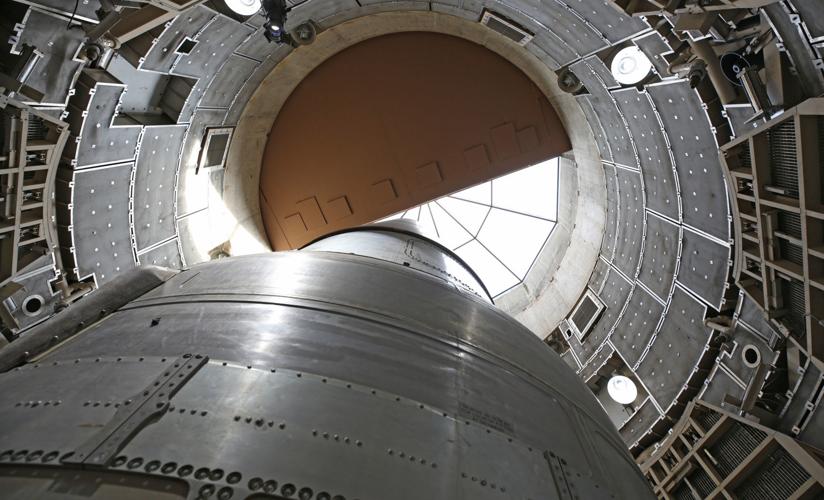 During the Director’s Tour at the Titan Missile Museum, visitors may be as close as 15 feet from where the 9-megaton warhead was once located. 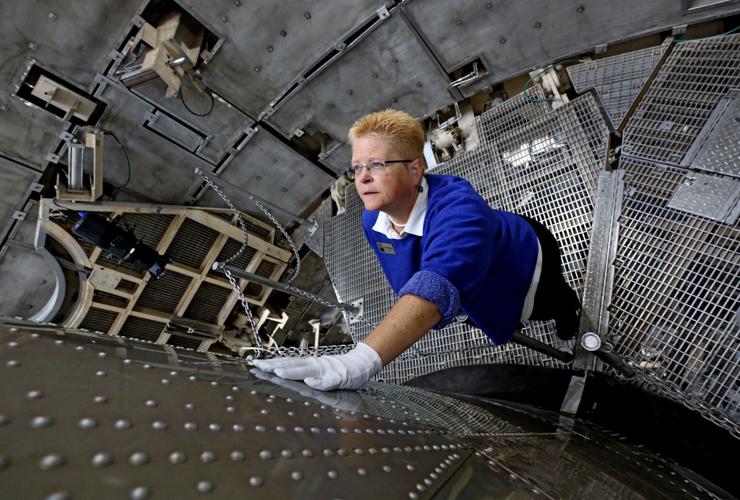 While working as a crew member, Morris inspected the missile at various times, but she doesn’t remember touching it. “I think I avoided touching it on purpose,” she said.

Now, you too can boldly go where Star Trek’s Capt. Picard and the android Data, of the USS Enterprise, have gone before … well almost.

The Titan Missile Museum, in Sahuarita south of Tucson, is offering a new tour of the deactivated Titan II missile facility. It is the Director’s Tour and it is an opportunity to view the site through the eyes of its director, Yvonne Morris.

Morris has a unique perspective because she was a U.S. Air Force officer and a missile combat crew commander at that very site. From 1980 to 1984, she would work a 24-hour shift training, testing and maintaining the peace during the Cold War.

But, what may be the coolest part of the tour, especially if you are a Star Trek fan, is you have a chance to put a hand on the missile itself, like the actors Patrick Stewart and Brent Spiner in the movie “Star Trek: First Contact,” when the Enterprise crew went back in time.

During the filming of the 1996 movie, the missile at the Titan Missile Museum was chosen to be the stand-in for the fictitious Phoenix, a ship used by Zefram Cochrane, known to Trekkies as the creator of the warp drive.

In the movie, a missile located in Montana, was used to boost the Phoenix into space launching mankind toward an age of space exploration.

“Jean-Luc Picard and Data actually go into the launch duct on Level 2 and they touch the missile,” Morris said. “We give Star Trek fans the ability to recreate that scene, if they would like.”

The only difference is you have to wear a glove.

“This is a tour given from my perspective as a former Titan II missile combat crew commander who was actually stationed at this site when it was operational,” Morris said. It is a chance to look directly through a window into the Titan II program.

The tour takes visitors into the launch control center, through a simulated launch of the missile.

During the time of the Cold War, the Strategic Air Command, or SAC, had high-performance standards and as a commander at the missile site, training and testing was a constant, she said.

“There was so little room for error,” according to Morris.

The intercontinental missile had a 9-megaton warhead, the equivalent of 9 million tons of TNT or three times the explosive power of all the bombs used during World War II, including both atomic bombs dropped on Japan.

The missile could be launched under a minute and be delivered to a target in 25 to 30 minutes.

“The re-entry vehicle carrying the warhead would re-enter the earth’s atmosphere at approximately 16,000 miles per hour, which is about 20 times the speed of sound.”

Another interesting fact is that, as depicted in the movies, it took two tiny keys to launch a missile from the control room, Morris said.

But, the real key blank for a missile launch key is the same key blank that is used to make vending machine keys.

The tour will also cover a number of things about crew life, such as what a typical 24-hour alert would be like and all the procedures that were in place to protect the site against an intruder or protect the system from an unauthorized launch of the missile.

This site is all that remains of the 54 Titan II missile sites, across several states, that were on alert from 1963 to 1987. There were 18 missile sites surrounding Tucson as well as 18 sites each around bases in Kansas and Arkansas.

“I want people to understand that this site is not a war memorial, it is not a memorial to nuclear weapons. We present a snapshot of U.S. history at a particular time,” Morris said.

At the time of the Cold War, the Soviet Union and the United States each built a stockpile of nuclear weapons.

The Soviet policy relied on the conviction that a nuclear war could be fought and won.

The U.S. adopted the stance of peace through deterrence involving a credible threat of retaliation to curb any aggression from a Soviet attack. They did this by developing and deploying several types of delivery systems that would retaliate with nuclear weapons.

“It is the one thing I really want people to understand when they leave here,” Morris said adding soberly, “If we had ever launched a Titan II, that would be because our primary mission of peace had failed.”

Taking visitors into the launch duct on Level 2 had never been offered before at the Titan Missile Museum, Morris said.

Once in the duct they are given a glove to wear then, “they will be standing inches away from the missile and we give them an opportunity to touch the missile,” she said.

It is a way to make it real for them.

And while you are in the duct you are not only next to the missile, you may be as close as 15 feet from where the warhead was once located.

Of course, Star Trek fans will like this experience, but other visitors can have an immersive experience and can benefit from this, she said.

“I actually touched the missile for the first time shortly after I entered the Air Force and began my initial training as a Titan II launch officer,” Morris said.

Crews and maintenance personnel got their initial training at Sheppard Air Force Base in Texas where they studied how everything worked. It turns out, the missile at the museum is the same missile she trained with.

As part of their training, “we were able to crawl around in an actual Titan II missile to study its internal structure.”

The fragility of its construction contradicts its total destructive power.

In places, the missile’s skin is as thin as a dime and in others, as thick as a quarter, making it not all that difficult to puncture.

“I remember thinking that it seemed very incongruous,” she said.

While working as a crew member, Morris inspected the missile at various times, but she doesn’t remember touching it.

“As a matter of fact, I think I avoided touching it on purpose,” she said.

This was not out of some strict Air Force directive, but her own reluctance to tempt fate, she said.

What she feels now is a mix of relief and geekiness, Morris said.

“Relief that we never had to launch a Titan II in anger, and geekiness for the reason that I think it’s just cool to be able to interact with the missile in its current configuration … it’s not something everyone gets to do.”

It is offered on the first Thursday morning of each month at 9 a.m. and is limited to six people who must be at least 12 years old. Proper footwear is expected including closed-toed shoes and sturdy walking shoes with rubber soles. Flip-flops and sandals are prohibited.

In addition, purses, bags, camera bags and backpacks are not allowed.

Because of safety concerns, the area is not accessible for visitors who need wheelchairs, walkers, crutches or canes. However, “if you can stand unassisted for just a couple of minutes, then you can go on this tour.”

Check in at the admissions area is no later than 8:45 a.m. or your reservation may be canceled.

The admission fee is $29.95 per person and there are no discounts.

Pieces of Tucson’s past come together in area history museums

Tucson-made, last-minute gifts for under $50

We've gathered up suggestions for gifts made right here in Tucson for a variety of folks.

Sweetwater is a find for birdlovers

Bring along your binoculars and your birding book for a scenic tour through Tucson’s Sweetwater Wetlands.

A couple of Tucson homes in the foothills area are the first to have been given historic landmark status by Pima County.

Learn about a hidden corner of Tucson’s past at the 39th annual Fort Lowell Day/La Reunión de El Fuerte Celebration.

At the Titan Missile Museum in Sahuarita, visitors get a glimpse into what it was like to work in the facility during the Cold War. On the Director’s Tour, visitors can touch the missile.

Yvonne Morris, the director of the Titan Missile Museum, presents the Director’s Tour on the first Thursday of each month. She worked 24-hour shifts at the site from 1980 to 1984.

During the Director’s Tour at the Titan Missile Museum, visitors may be as close as 15 feet from where the 9-megaton warhead was once located.

While working as a crew member, Morris inspected the missile at various times, but she doesn’t remember touching it. “I think I avoided touching it on purpose,” she said.