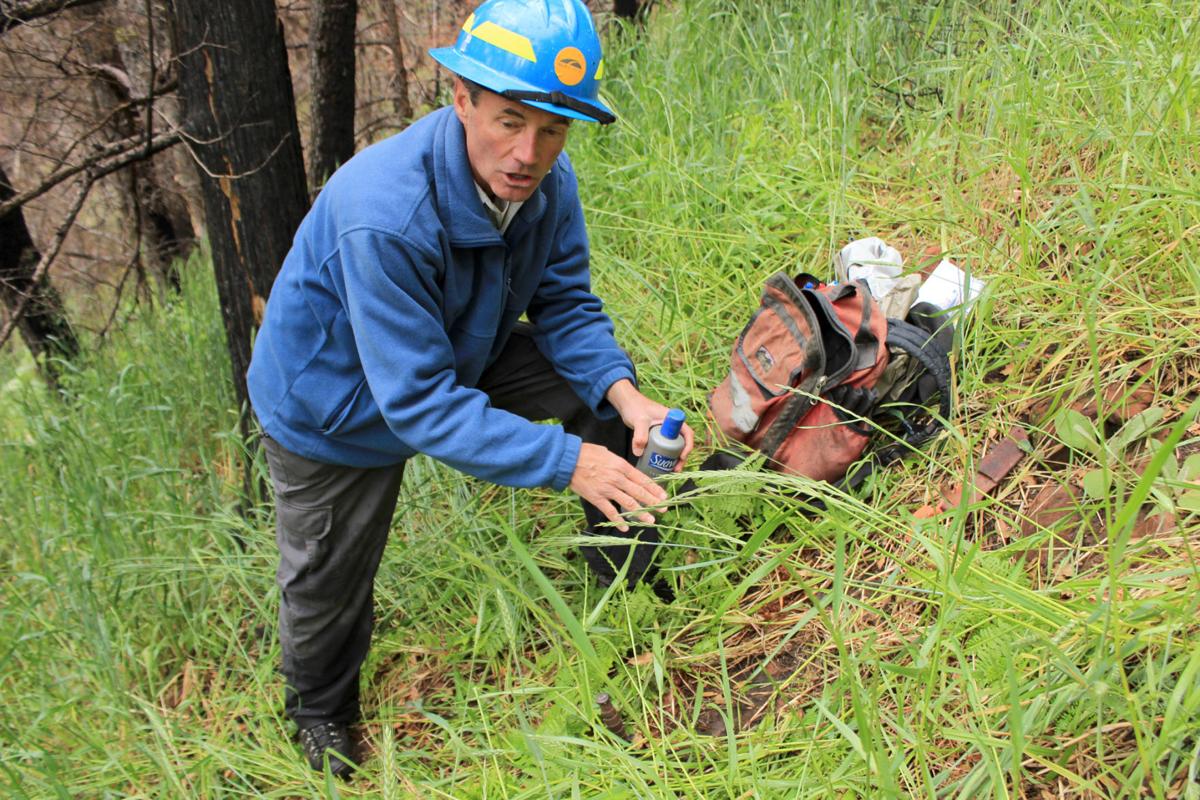 Rory Steinke from the Coconino National Forest examines the hydrophobic qualities of soil burned during the Slide Fire. 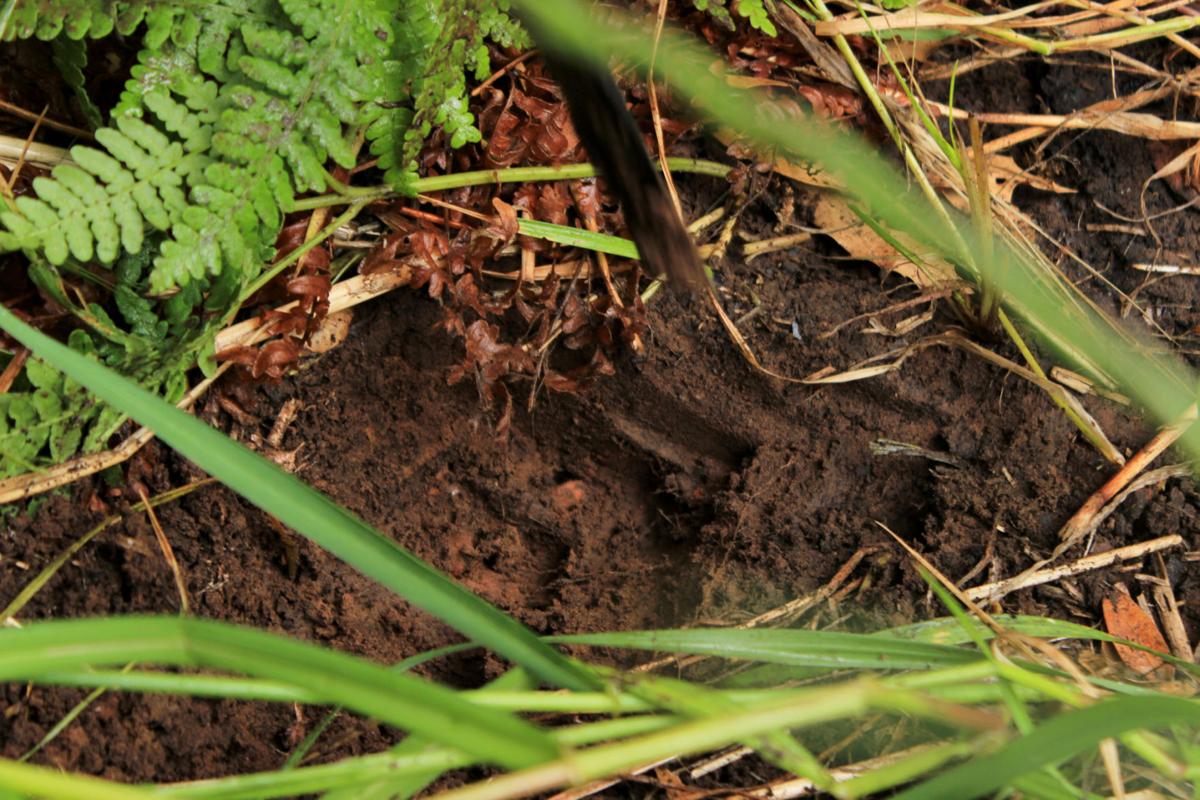 In order to determine the absorbency of an area of soil burned by the Slide fire forest managers test how quickly water absorbs into the soil at different depths. 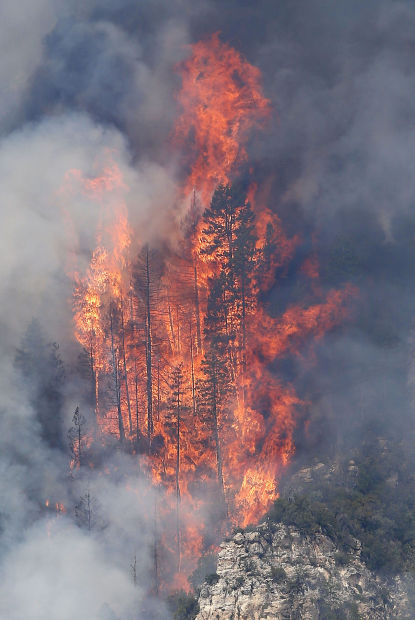 Flames shoot up more than 125 feet as the Slide Fire burns in Oak Creek Canyon, south of Flagstaff, in this 2014 file photo.

Smoke rises from the Slide Fire as it burns up Oak Creek Canyon. It took 16 days last year to contain the 21,227-acre blaze.

That meant the soil, charred by flames during last year’s Slide Fire, has started to recover much of its absorbency. Longer than 10 seconds to absorb the water would have indicated the soils still have the hydrophobic crust that makes water race down slopes, creating the severe flooding many feared would follow the 21,227-acre fire.

Steinke, leader of the Forest Service’s Burned Area Emergency Response team on the Slide Fire, is heading the first major evaluation of how the forest inside the burn perimeter has recovered one year after the fire began.

The assessment will be used by the district ranger to decide whether to close Oak Creek Canyon again this year due to flooding risk from monsoon storms, a decision expected within the next couple of weeks.

So far the Forest Service’s findings, along with the opinions of business owners, scientists, residents and recreationists, indicate the area is healing remarkably well. It appears the area has avoided some of the most catastrophic impacts — the destruction of treasured recreation areas and severe flooding that would wipe out homes and roads — that many feared when flames first broke out that hot May afternoon a year ago.

It was May 20, 2014, that flames were first spotted on the west side of Oak Creek at Halfway picnic area upstream from Slide Rock State Park. After that, it took less than a day for the fire to race up the west side Oak Creek Canyon and start crawling up Sterling Canyon.

As the fire advanced it churned through the canyons that feed into Oak Creek Canyon and then crested the Mogollon Rim, crawling through the canopies of ponderosa pine.

Sixteen days later when the blaze was finally contained, about half of the 21,227 acres had seen low severity fire mostly set as backburns by firefighters, a third had seen moderate severity fire and 14 percent had been torched by high severity fire.

Five teams from Coconino National Forest are venturing into the burn area to assess how the threat of flooding, debris flow, rockslides and landslides and their potential to impact people, properties and cultural and natural resources downstream has changed since the weeks after the fire. The focus is on how the area will respond as monsoon storms sweep over the area this summer.

So far, things are looking good, Steinke said. Based on data collected up to now, he’s estimating that the flooding-related threats have been reduced by one-third to one-half since the fire.

The approximately 2,200 acres that were seeded and mulched — a number that represents more than half of the high burn severity area — have seen excellent recovery, with low, leafy plants and seeded grasses reaching three to four feet in height, Steinke said.

In the stretches of ponderosa pine that saw high severity fire but haven’t been mulched and seeded, recovery will take longer. It will likely take five years for shrubs and leafy plants to reach a prefire state while the trees will take decades to fully recover, Steinke said. However, shrubby chaparral, vegetation type that covers the steep slopes of Oak Creek, will likely grow back within about three years, he said.

Also good news is that soils on most moderate and high burn severity slopes have improved significantly in their ability to absorb water, a process that usually occurs over two to three years, Steinke said.

There are several reasons that recovery in the Slide Fire area is happening more quickly than, for example, in Northern Arizona’s burn scar from the 2010 Schultz Fire, Steinke said. One is that low to moderate intensity storms have provided moisture to spur vegetation growth and break down the oils created when wood debris is consumed in a fire. Those oils are what coat soils, causing them to repel water, which contributes to flooding. The shrub-like vegetation along the walls of Oak Creek Canyon also naturally springs back relatively quickly in the face of fire.

In contrast, a greater portion of the steep slopes of the Schultz Fire scar were more severely burned, and they were pummeled by torrential downpours during the first summer instead of rain that would have been more readily absorbed.

Though it scarred many precious areas of the forest, the Slide Fire also did do some good, or at least wasn’t as bad as many first feared.

For one, the low severity fire set by firefighters as backburns on about 10,000 acres actually helped restore the ecosystem in those areas, said Beale Monday, a fire management specialist on the Coconino National Forest. Growth in those areas is happening faster than on areas that didn’t experience fire because the flames spur nutrient recycling and clear away heavy needle cover to facilitate new plant growth, Steinke said.

And those who frequent the area’s trails breathed a sigh of relief when they saw the final impact of the fire, said Curtis Kommer, president of the hiking group Sedona Westerners. Just one trail, A.B. Young, remains closed a year later.

“We were all terrified that fire was going to destroy all of our precious resources up there,” Kommer said. But now, he said, “there’s a tremendous amount of optimism regarding Oak Creek Canyon.”

Closed for the summer?

Oak Creek Canyon “dodged a bullet” last year in terms of flooding, Steinke said. The topography of the burn area, with flatter areas on top of the Mogollon Rim, helped slow down water before it flowed into the canyon. The area also got lucky with monsoon rains and winter storms that dropped slow and steady moisture instead of severe precipitation.

But just because flooding this year in the canyon was minimal hardly means the risk is gone, said Robert Rowley, Coconino County’s emergency manager. Because of evacuation concerns, the entire canyon from Sedona north to the overlook was closed to recreationists last summer — only drive-through traffic and business customers and employees, along with residents, were allowed in.

Rowley’s opinion is one of many that Red Rock Ranger District ranger Nicole Branton will consider in her decision about closures in Oak Creek Canyon again this summer. Branton will also weigh the BAER team’s assessment of vegetation and soils recovery as she considers how or whether to close National Forest lands and recreation sites within the canyon due to flooding risk.

And it’s not all or nothing, she said. She could decide to close just parts of the canyon, or close it for only certain periods. Or it could become apparent that it won’t be necessary to close the canyon at all, she said.

“We don’t want to rush into it without looking at the science, but I very much appreciate the influence this has on the economy and people’s ability to access public lands,” she said.

Rory Steinke from the Coconino National Forest examines the hydrophobic qualities of soil burned during the Slide Fire.

In order to determine the absorbency of an area of soil burned by the Slide fire forest managers test how quickly water absorbs into the soil at different depths.

Flames shoot up more than 125 feet as the Slide Fire burns in Oak Creek Canyon, south of Flagstaff, in this 2014 file photo.

Smoke rises from the Slide Fire as it burns up Oak Creek Canyon. It took 16 days last year to contain the 21,227-acre blaze.