Friday morning, floodwaters were pouring through a concrete diversion channel into a 5-acre pond on Tucson’s south side. Alongside the pond stood groves of snow-capped mesquite and palo verde trees. At a small waterfall at the edge of the pond, a bright blue cooler bounced back and forth, caught in a snag.

The pond is the centerpiece of Pima County’s 126-acre, Kino Environmental Restoration Project. Since 2002, it has captured rainfall to prevent floods, to generate wildlife-drawing cottonwoods and willows, and to store water for irrigation.

It’s known as the county’s stormwater savings bank, and right now its account is overflowing.

The project stores rain and, in Friday’s case, snow, that falls on a 17-square-mile area east of Country Club Road. It waters soccer and baseball fields at the neighboring Kino Sports Complex along with a neighboring park, road medians and some landscaping.

The cement-lined, 50-foot-deep pond was virtually full Friday morning. Water was over-topping metal railings alongside it.

A bit more than 3 inches of precipitation has fallen so far this year at Tucson International Airport, almost twice the norm. That’s put enough water into the Kino park to keep neighboring fields and other landscaping green until summer, said Jennifer Becker, a Pima County Regional Flood Control District hydrologist.

The park is a visible symbol of Tucson’s ability to capture rainwater for human use as an alternative to pumped groundwater or Central Arizona Project water from the oversubscribed Colorado River.

County officials tout it as a success story, saying its savings on irrigation have more than covered the local $6 million share of its $11 million construction cost. The rest was from the U.S. Army Corps of Engineers.

But as the region’s water supplies tighten due to climate change and growth, questions arise: What more can or should we do? How much would it cost to capture enough stormwater to dent this region’s dependence on unsustainable and unreliable other supplies?

Now, city and county officials are looking at stormwater capture options more closely than ever.

In March or April, Tucson Water officials are to bring a proposal to the City Council for a $3 million to $4 million “green infrastructure” fund to incorporate water-harvesting features into new or rebuilt road projects and city parks. An example: curb cuts along streets that allow water to flow into trees alongside them.

“Where we are right now, there’s certainly a greater awareness of rain and stormwater as a resource than in the past,” Tucson Water Director Tim Thomure said last week. “There’s certainly a willingness to investigate how we can better leverage our resources. ... Not just the city, but the county as well.”

Pima County Administrator Chuck Huckelberry said he plans more large-scale rainwater capture in the coming years. First, he wants to build a second pond similar to the Kino pond as the county builds its planned, $26 million expansion of the Kino Sports Complex along Ajo Way.

The expansion will add a dozen multi-use athletic fields and 20 pickleball courts along with the related infrastructure. The new basin will be built south of Interstate 10, Huckelberry said Friday.

“I think it’s the largest urban stormwater-harvesting project in the West,” Huckelberry said of the existing Kino project. “I’ve never heard of anything as big as this. And this (next) one will be cheaper, maybe $2 million to $3 million, for just the hole in the ground. The other basic infrastructure there is in.”

Two longtime Tucson water activists say the agencies should do more. Author and water-harvesting pioneer Brad Lancaster wants the city and county to ensure that all future road projects use curb cuts or other means to capture stormwater.

He’d like local governments to require builders of new homes to incorporate water harvesting, already required for new commercial development in the city. Existing requirements should be extended to new golf courses, cemeteries, schools and parks, he said.

While Lancaster thinks it’s great Huckelberry wants more large-scale water harvesting, he said, “It would be tragic if that would not include the harvesting of water on a smaller scale, as close as possible to where it falls throughout the city and county.

“With these large projects ... that doesn’t address the areas outside of those projects. How do we get the water to those areas?” he said. “If we’re harvesting water as close as possible to where it falls, we don’t worry about distribution of the water.”

Val Little, director of the Water Conservation Alliance of Southern Arizona, said that when local governments push through multi-million-dollar bond issues to build new parks, “Every single ball field and park we build should have a stormwater component.

“We should depress and create basins for them, below normal grade, so when it rains, it floods and drains into them and then the water percolates into the aquifer.”

Other cities are ahead of Tucson

Plenty of cities are farther along than Tucson with stormwater. That’s according to a recent book on how to better manage water.

Portland, Oregon, has invested in “green roofs” to capture rainfall and “green streets” that soak up runoff to avoid flooding and sewer overflows, said the book, “Replenish: The Virtuous Cycle of Water and Prosperity.”

Chicago has at least 500 landscaped “green roofs” that capture runoff and beautify the city.

“It’s all about designing in nature’s image and allowing rain to do what it did before buildings, roads, driveways, parking lots and other impervious surfaces covered the landscape,” writes Sandra Postel, the book’s author.

Other examples are Los Angeles, heavily dependent on water from the Colorado. It has set a goal of getting half its water from local sources by 2035. By 2025, the city government wants to capture 61,300 acre-feet of stormwater, about one-tenth of what it would need total, the book says.

It quotes Richard Luthy, a Stanford University engineering professor, estimating that with enough major projects, Los Angeles could capture more than three times that much a year.

Abroad, Copenhagen, Denmark, is expanding and redesigning parks and other public spaces to capture more stormwater to prevent extreme flooding due to climate change.

And in China, the national government wants cities to act like sponges, in the words of Chinese President Xi JinPing. It has picked 16 cities including Bejing and Shanghai to invest $175 million in federal funds over three years in projects capturing stormwater.

“I wouldn’t say it’s at a tipping point where it’s mainstram,” Postel said of green infrastructure. “But more and more I see it being talked about as a solution.”

We’ve looked at this before

The idea of stormwater capture is hardly new in Tucson, either.

But those ideas never panned out, partly because of cost and partly out of concern that downstream water users would object or sue to stop Tucson from “stealing” their water. (In reality, at least one study, done in Colorado, has found that harvesting rain typically captures only a small percent of all the rain that falls in an area).

Instead, the city of Tucson has supported rainwater harvesting on a neighborhood scale, giving more than $2.2 million in rebates to more than 2,000 homeowners since 2012.

Looking to the future, County Administrator Huckelberry says that an existing, 30-acre gravel pit near Sunset Road and the Santa Cruz River on the northwest side could be turned into a stormwater capture basin by 2026, when its existing user finishes extracting gravel.

Longer term, Huckelberry says he wants to add water-harvesting features when he revisits the long-abandoned Tres Rios environmental restoration project, to be done near the confluence of the Santa Cruz and Rillito rivers and the Cañada del Oro Wash. The original project was planned to run from the Roger Road sewage treatment plant but never panned out, he said. This one will be scaled back to be more fiscally feasible, he said.

On a smaller scale, the county plans to start construction this year on water-harvesting features at an 18-acre park along the Santa Cruz near Grant and Silverbell roads. It will include earthen berms that direct stormwater to low-lying basins, vegetated swales, trees and shrubs. It’s one of 40 green infrastructure projects the county hopes to build by 2025.

As for the city’s planned green infrastructure fund, it could be used in parking lots near city parks and to install basins and berms to harvest rainwater, said Tucson Water Director Thomure. Or, it can be used to improve maintenance of 400 existing city infrastructure areas, he said.

“We have a very mixed bag of maintenance on them, some quite well, some not at all,” he said.

Overall, “I can’t say we have a good vision here yet,” Thomure said. “But one is evolving, a better vision, for multiple benefits. Not just water supply, but flood control, tree canopy and urban heat island mitigation. ... You have to think more broadly.”

Star editor: Your questions about dropping 'Non Sequitur;' my answers

I’ve talked with more than 100 readers this week, all but a handful expressing anywhere from mild disgust to complete outrage with my decision…

Luis Carrasco: Trump voters are open to compromise on immigration

Voters want compromise even if politicians forget the meaning of the word.

Though McSally supports President Trump's goal to secure the border, she has some concerns on how his administration plans on paying for it.

City Council will discuss ways to get more low-income residents on rebates, perhaps with loans.

House Speaker Rusty Bowers said the measure will help keep thousands of Arizona well owners out of jail. Himself included.

It buys Arizona some time to deal with the fact that the state is headed into a hotter and drier future.

The clearings irk supporters of rainwater harvesting because they happened at a time when Tucson City Hall is trying to promote rainwater for landscaping on other fronts. 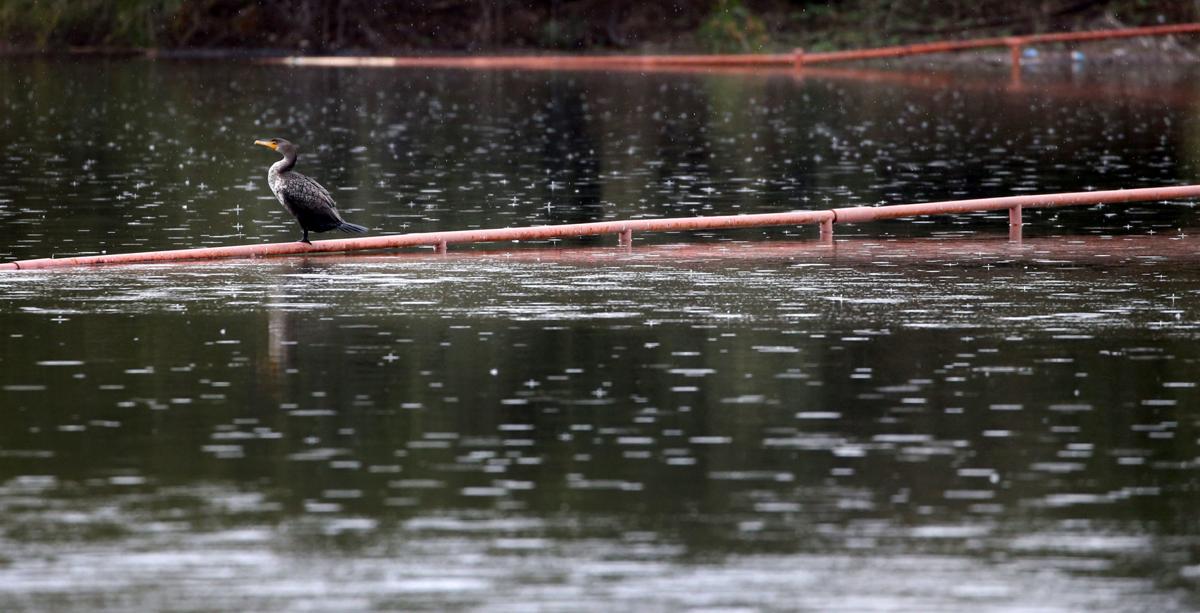 A cormorant sits on a guardrail rapidly being engulfed by the runoff from rain and snow flooding the stormwater catch basin in the Kino Environmental Restoration Project. 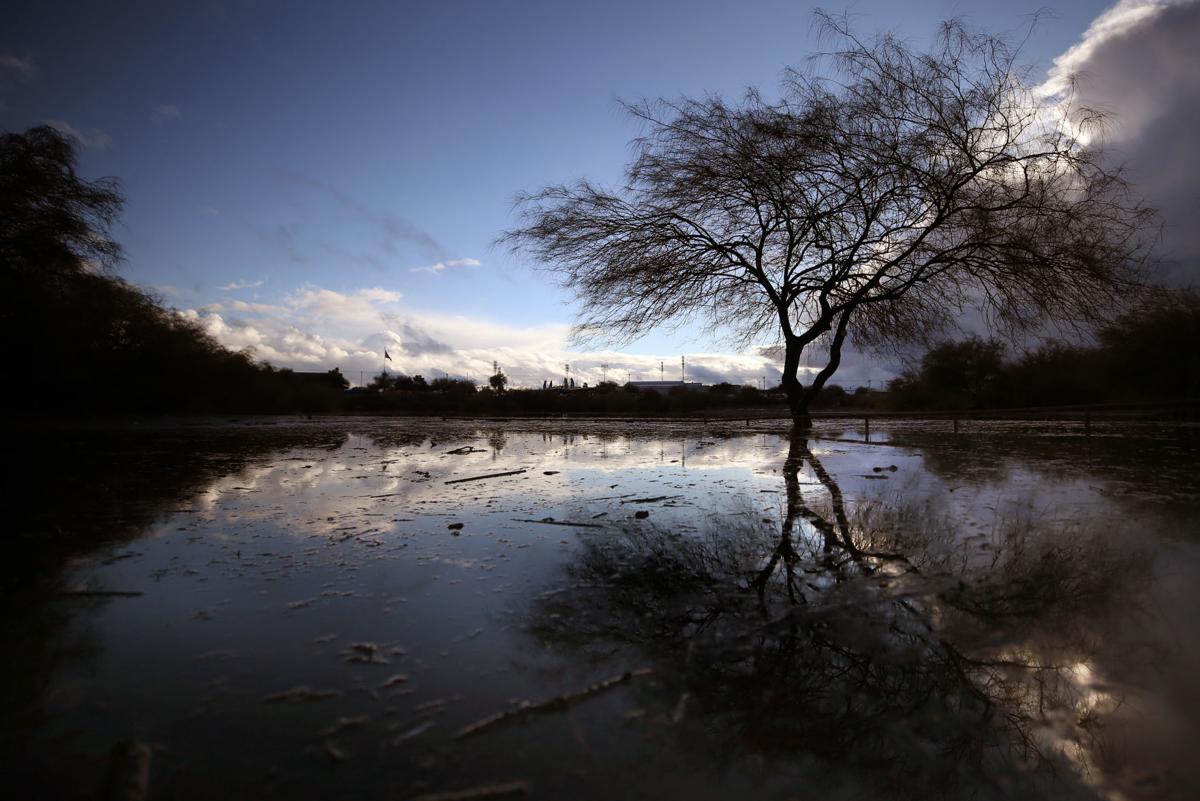 A palo verde tree is surrounded by water as runoff from the day’s snow and rain floods the stormwater catch basin east of Country Club Road near the Kino Sports Complex.