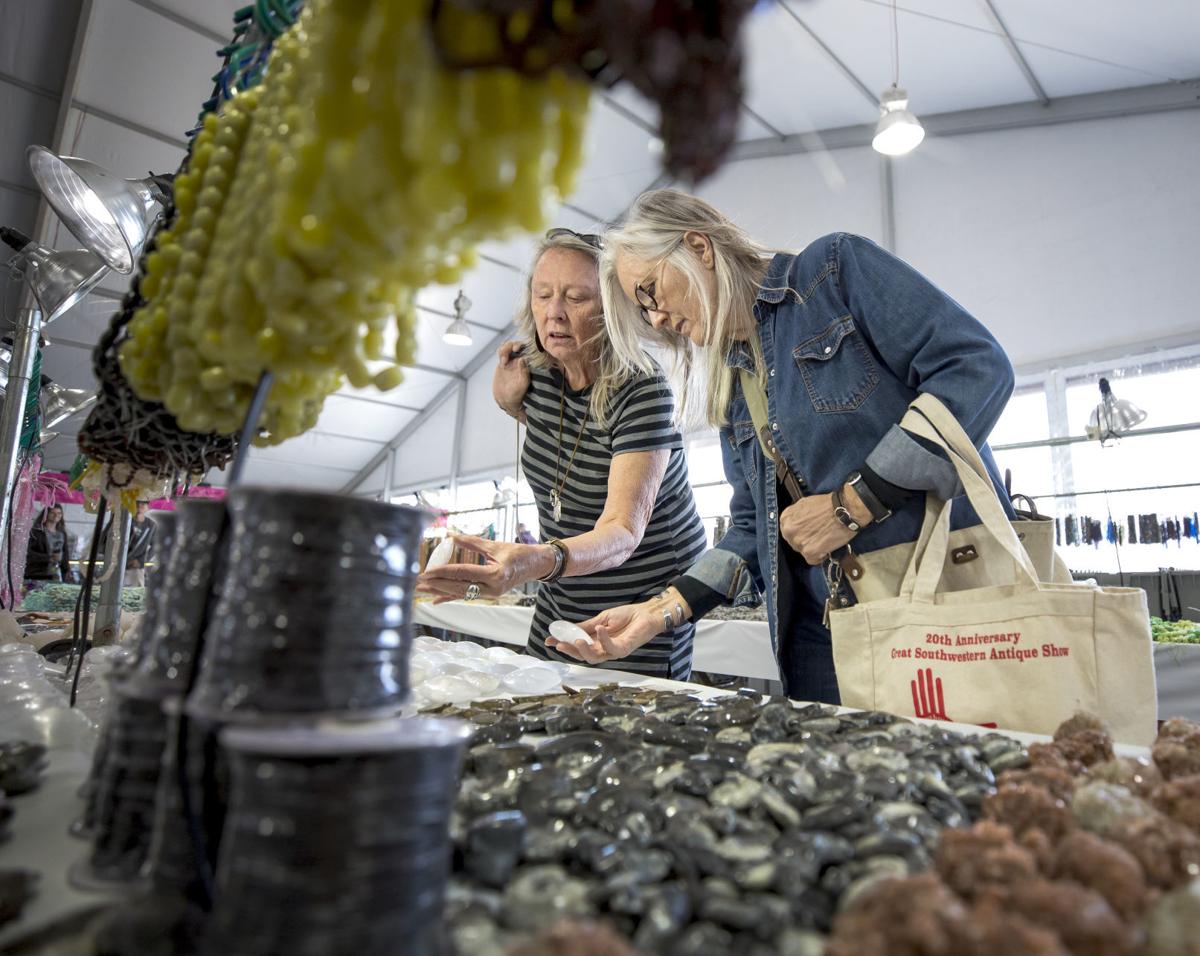 Terry Schurmeier, of New Mexico, left, and Victoria Roberts, of California, brought masks to guard against a new strain of the coronavirus but chose to not wear them because fewer people are on hand at the start of the gem showcase. 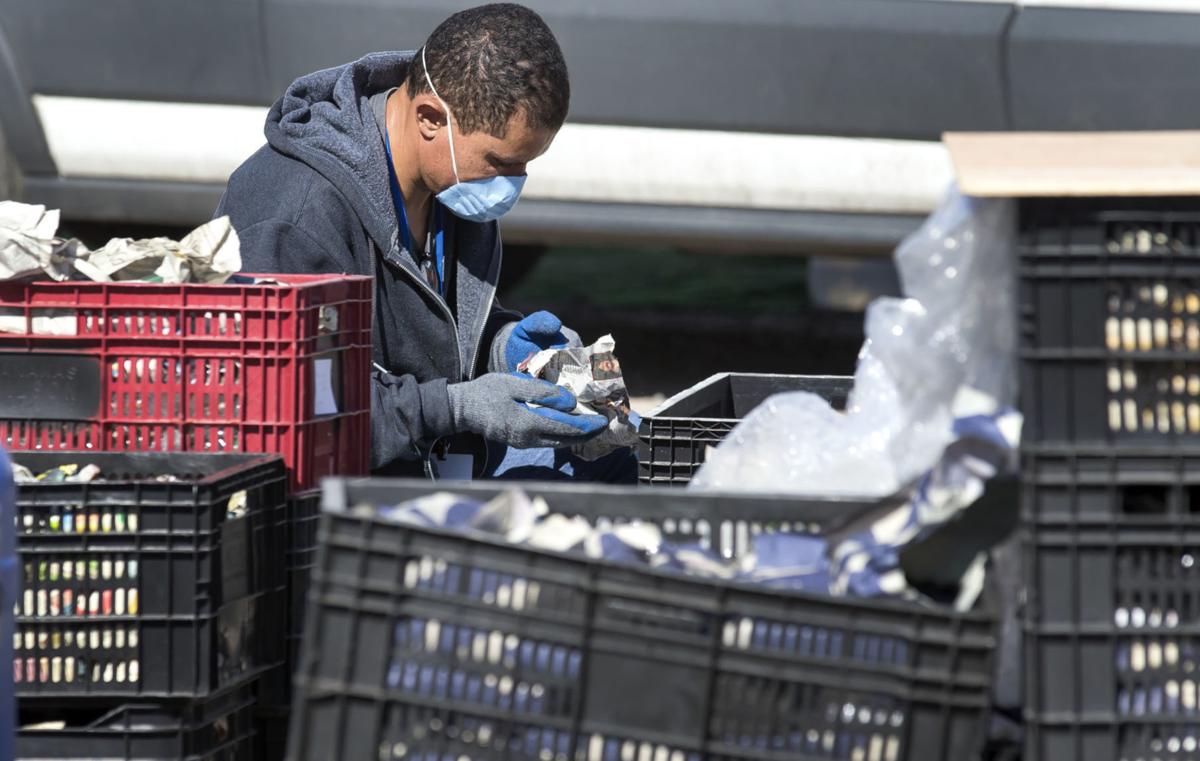 A worker, who chose to not give his name, sorted through packaged minerals while wearing a mask at the Kino Gem and Mineral Show earlier this year. The worker said he wore the mask because of dust and the recent coronavirus outbreak.

Visitors to the Tucson Gem, Mineral and Fossil Showcase have no more reason to worry about the new virus than they do this year’s strain of influenza, says city spokesman Andy Squire.

“Not to downplay it too much, but it needs to be downplayed somewhat,” he said. “This is not a panic situation. This is not Ebola.”

Even so, city and county officials have fielded a barrage of calls in recent days from people worried about the growing coronavirus outbreak, which has now spread to 17 countries since it was first detected in the city of Wuhan, China.

In response to all the calls, the Pima County Health Department has set up a special website — www.pima.gov/cov — with information about coronavirus and the gem show, mostly to calm people’s fears and give them tips on how to avoid getting sick.

Health Department Deputy Director Paula Mandel said she is a lot more worried about “those common bugs you get when you bring large groups of folks together,” namely colds, stomach viruses and the flu.

Luckily, she said, the same basic hygiene practices that can protect people from those less exotic illnesses should also keep them safe from the new virus making headlines around the globe.

“It’s all the things that mom teaches us when we’re young: cover your cough, wash your hands, use tissues and then throw them away,” Mandel said.

And if you’re running a fever or you think you might be sick, stay home. “(The gem show) is going on for a couple of weeks. You’ll have plenty of time to attend once you’re feeling better,” Mandel said.

As of Wednesday, the new coronavirus strain had been blamed for more than 100 deaths, all of them in China.

By comparison, the flu has killed some 8,200 people in the U.S. alone since Oct. 1, according to estimates from the Centers for Disease Control and Prevention.

The CDC believes the immediate risk from coronavirus in the U.S. is low. Just five cases have been confirmed so far nationwide, including a Tempe resident associated with Arizona State University who recently tested positive after traveling to Wuhan. ASU officials announced Monday that the individual “does not live in university housing, is not severely ill and is currently in isolation to keep the illness from spreading.”

Students could be seen wearing masks on the ASU campus Monday, after university officials rejected an online petition, signed more than 15,000 times, that called for classes to be canceled, The Arizona Republic reported. On Tuesday, ASU issued a ban on university-related travel to China.

The University of Arizona also sent out a message about coronavirus to students and faculty, but the only cancellation was the UA’s annual Chinese New Year Festival Show slated for Feb. 1 at Centennial Hall.

According to the university’s message, three school employees are currently in China on UA business.

“Any university travel planned for China must be approved by the university,” the message stated.

The CDC is also advising against any nonessential travel to the country at the center of the outbreak.

This year’s gem show could be largest ever

So what about all the people who might be on their way here from around the world?

The gem and mineral showcase is one of Tucson’s largest annual events, with tens of thousands of participants, some of them international.

This year’s showcase, which begins Saturday, Feb. 1, and runs through Feb. 16, is expected to be the largest ever. The outbreak overseas hasn’t changed that prediction.

“I haven’t heard from any of the shows with concerns about this issue, and everything is scheduled to execute as planned,” said Jane Roxbury, director of convention services for Visit Tucson.

But at least one gem show-related event nearly was derailed by coronavirus concerns.

The Tucson Chinese Cultural Center is slated to cater and host a Feb. 7 gathering of about 350 gem show attendees, but executive director Susan Chan said her organization briefly discussed canceling it because so many of the people scheduled to serve food at the event were afraid of being exposed to international visitors.

In the end, they decided to go ahead with the event but allow their servers to wear masks and gloves if they want. “We’re just going to do what we can,” Chan said.

“We’re as prepared as we can be”

This isn’t the first time the gem and mineral show has coincided with a worldwide health scare.

Squire said there was a deadly Ebola outbreak two years ago in parts of Africa where some vendors get their gems and fossils. Before that, the worry was the Zika virus from South America.

This time around, local health workers and first responders are being advised to ask patients with respiratory illnesses or flu-like symptoms about any recent trips abroad. Anyone who has traveled to China over the past two months — or been in contact with someone who has — could be tested for coronavirus by the CDC.

Beyond that, though, officials here are not planning anything out of the ordinary during Tucson’s big rock festival — at least not yet, Squire said.

Tucson International Airport hasn’t adopted any special procedures in response to the outbreak, either.

Though the gem show does result in an uptick in arrivals, there are no direct flights to Tucson from China, said Jessie Butler, spokeswoman for the Tucson Airport Authority.

Butler said Tucson airport officials are working closely with the city and the county to stay on top of the latest developments with the outbreak.

“I think we’re as prepared as we can be,” she said.

There were few outward signs of worry at the Kino Gem and Mineral Show at Kino Sports Complex on Wednesday. In the midday crowd of hundreds of people, only five could be seen wearing masks as they shopped or set up booths.

One of them, a vendor from California who didn’t want her name used, said she’s been coming to the Tucson gem showcase for the past 10 years, and this is the first time she has worn a surgical mask. “I don’t want to get sick,” she said.

Outside, a man unpacking boxes of merchandise said his painter’s mask was there to protect him from both coronavirus and dust. He declined to give his name.

Vendor Tim Honnell, a gem-show regular of almost 20 years, said he had no immediate plans to wear a mask, but he would be stocking up on extra sanitary wipes and hand sanitizer for his customers and sales crew.

Coronavirus “is definitely on my radar,” the Santa Fe, New Mexico, turquoise and bead merchant said, but he doesn’t expect it to affect gem-show attendance or sales. No one will be closing down their booth because of it, he said.

“You can’t afford to get sick in our business. This is our livelihood,” Honnell said.

Jewelry artist Michelle Godbehere came to Tucson from Reno, Nevada, to help out in Honnell’s booth and sell some of her own creations. She seemed to be taking the whole outbreak thing in stride on Wednesday.

“We have gems and germs from all over the world,” she said, “so wash your hands.”

The Centers for Disease Control and Prevention is compiling all the latest developments about the coronavirus outbreak on its website at www.cdc.org.

Local information and tips for avoiding coronavirus at the gem show and elsewhere is available at www.pima.gov/cov, a special website set up by the Pima County Health District.

Navigating the Tucson Gem, Mineral and Fossil Showcase from A-Z

An alphabet of tips, shows and factoids for both pros and newbies alike.

AsYouWere will play the biggest show of its 18-month-old career with Tucson festival.

The 2020 showcase, slated to begin on Feb. 1, will be the biggest yet, organizers say.

After taking a year off, the three-day EDM music festival at the Pima County Fairgrounds is back bigger than ever.

Get an instant high at the Tucson Gem Show

Saunter into any of the showrooms stocked with magnificent malachite, dazzling amethyst and twinkling topaz and you’ll start feeling the crystal energy lifting you up immediately.

Chinese New Year's event in Tucson canceled due to coronavirus

The Tucson Chinese Cultural Center and the Tucson chapter of the Organization of Chinese Americans postpone events amid concerns about the virus that originated in China.

Scientists in Flagstaff are working to develop a test that doctors and hospitals could use to diagnose coronavirus, which could help medical p…

Post 9/11 law would allow state officials to quarantine individuals and call in the National Guard, law enforcement to deal with any widespread illness.

Organizers say sanitation stations will be available at the festival along with an extra 300 hand pumps at exhibitor booths.

Terry Schurmeier, of New Mexico, left, and Victoria Roberts, of California, brought masks to guard against a new strain of the coronavirus but chose to not wear them because fewer people are on hand at the start of the gem showcase.

A worker, who chose to not give his name, sorted through packaged minerals while wearing a mask at the Kino Gem and Mineral Show earlier this year. The worker said he wore the mask because of dust and the recent coronavirus outbreak.