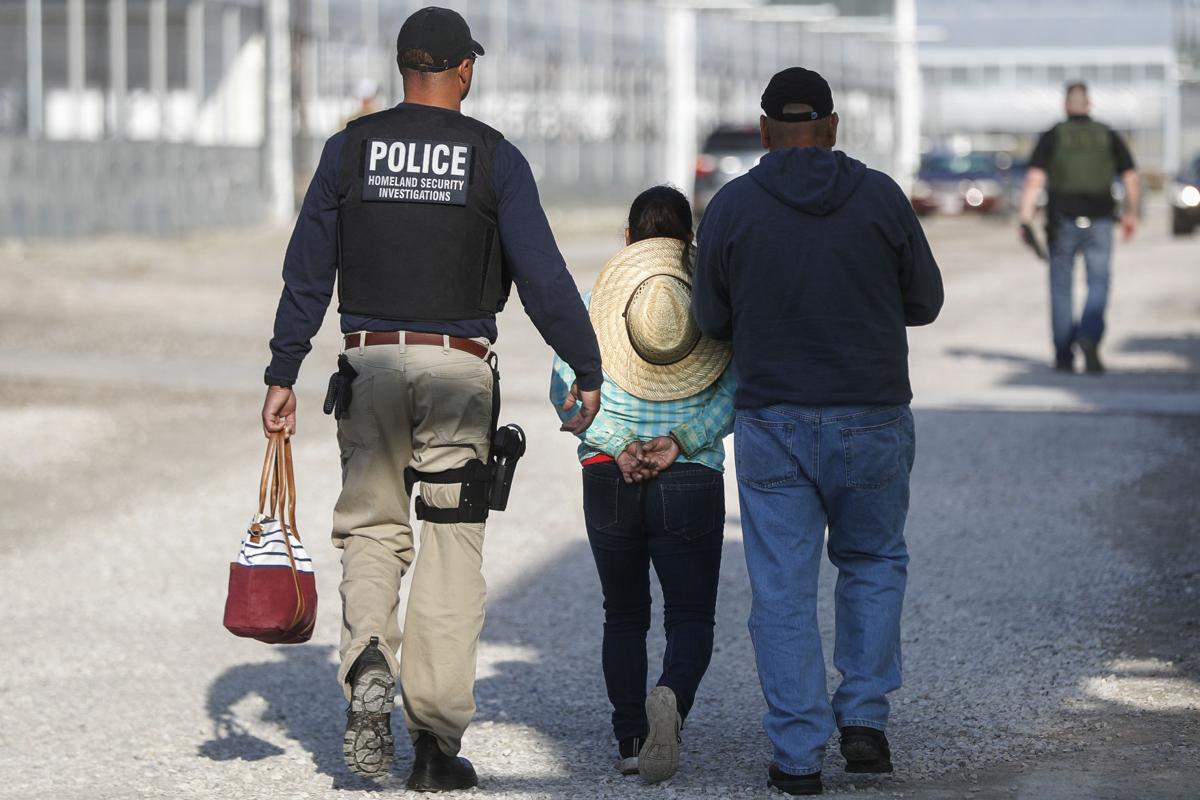 Government agents take a woman suspected of living in the country illegally into custody during an immigration sting at Corso's Flower and Garden Center in Castalia, Ohio, Tuesday, June 5, 2018. The operation is one of the largest against employers in recent years on allegations of violating immigration laws. 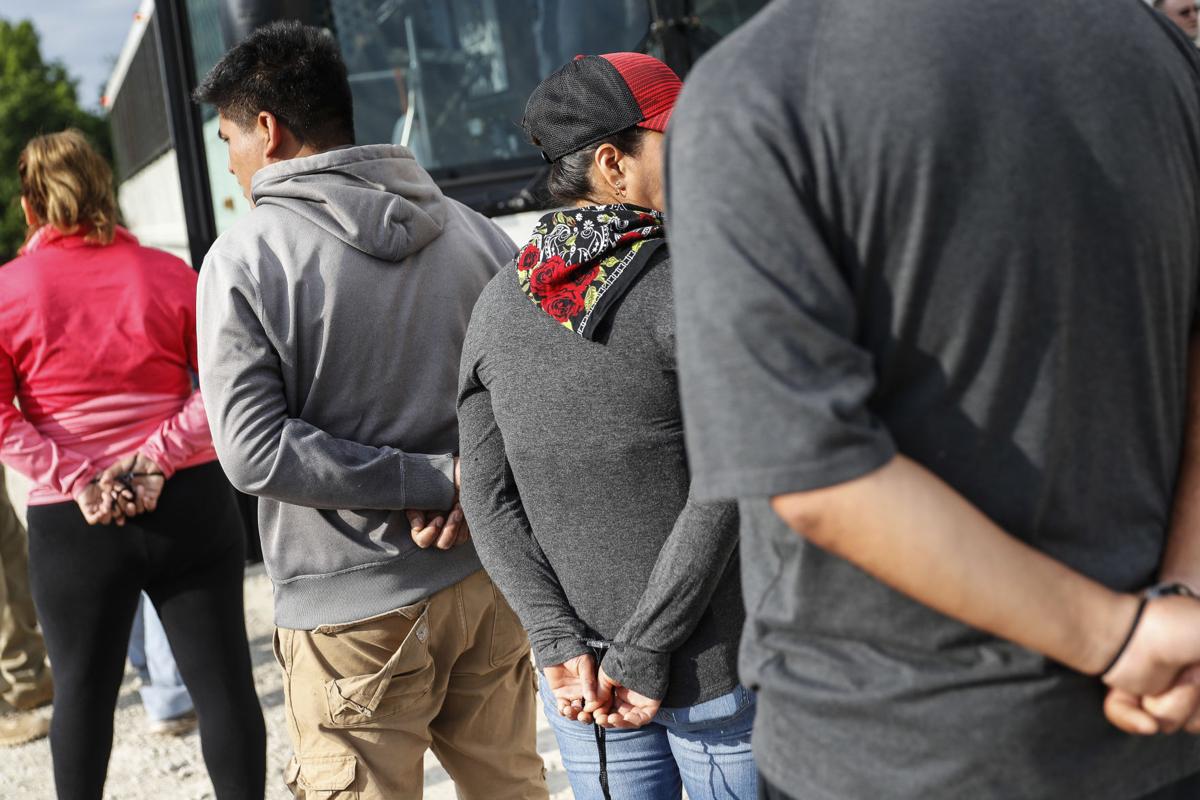 Suspects wait to be loaded onto a bus during an immigration sting at Corso's Flower and Garden Center, Tuesday, June 5, 2018, in Castalia, Ohio. The operation is one of the largest against employers in recent years on allegations of violating immigration laws.

By John Minchillo and Elliot Spagat The Associated Press

SANDUSKY, Ohio — U.S. immigration agents made more than 100 arrests Tuesday at a gardening and landscaping company, aided by about 200 law enforcement workers in one of the largest employer stings in recent years.

The 114 arrests occurred at two locations of Corso's Flower & Garden Center, one in Sandusky, a resort city on Lake Erie, and another in nearby Castalia. U.S. Immigration and Customs Enforcement said it expected criminal charges including identity theft and tax evasion.

No criminal charges have been filed against Corso's, but the employer is under investigation, authorities said. Two locations were searched, and Khaalid Walls, an agency spokesman, said "a large volume of business documents" were seized.

The large-scale operation, assisted by aerial surveillance, is part of the Trump administration's increasing focus on employers that hire people in the country illegally, one that took hold about a year after the president took office, and came months after a surge in deportation arrests began.

In April, agents made about 100 worker arrests at a meatpacking plant in rural Tennessee, another high-profile show of force reminiscent of President George W. Bush's administration. No criminal charges have been filed against the employer.

Tuesday's operation was carried out with quiet efficiency. At the Castalia facility — covered with trees, flowers and greenhouse tarps — no workers were seen running as about 100 law enforcement officials established a perimeter. A voice on a radio called attention to specific employees who might try to flee, but none did.

Corso's did not return a message seeking comment on the operation.

Corso's describes itself as a family-owned company that serves seven states with a 160,000-square-foot (15,000-square-meter) greenhouse and additional 200,000 square feet (19,000 square meters) to grow perennials. Its Sandusky facility is on the city's busiest road amid hotels and fast-food joints that cater to tourists who drive by in the summer on their way to Lake Erie and Cedar Point amusement park.

Josie Gonzalez, a Los Angeles attorney who represents businesses on immigration matters, questioned why the arrests couldn't have been made with fewer resources, perhaps by visiting worker homes based on addresses Corso's provided to authorities. She suspects the government wanted publicity.

"Government is overreaching and trying to make a big splash, instill fear in the business community and immigrant communities and make the headlines," she said. "It's a tremendous use of resources to accomplish that purpose."

The investigation into Corso's began in October 2017 when the U.S. Border Patrol arrested a woman who gave stolen identity documents to job applicants in the country illegally, said Steve Francis, head of U.S. Immigration and Customs Enforcement's Homeland Security Investigations unit in Detroit.

The document vendor led investigators to the landscaping company, where they examined documents in its files for irregularities, Francis said. Some Social Security numbers belonged to dead people.

Of the 313 employees whose records were examined, 123 were found suspicious and targeted for arrest and criminal charges of identity theft and, in nearly all cases, tax evasion.

"We verified that a lot of U.S. persons were obviously unaware of this. It's caused them a lot of hardship," Francis said. "It's not one that we're looking for strictly as a worksite immigration raid."

Immigration officials have sharply increased audits of companies to verify their employees are authorized to work in the country. There were 2,282 employer audits opened between Oct. 1 and May 4, nearly a 60 percent jump from the 1,360 audits opened between October 2016 and September 2017. Many of those reviews were launched after audits began at 100 7-Eleven franchises in 17 states in January.

The crackdown is likely to please immigration hawks among Trump's supporters but may alienate industries and companies that rely on immigrants in tight labor markets.

Government agents take a woman suspected of living in the country illegally into custody during an immigration sting at Corso's Flower and Garden Center in Castalia, Ohio, Tuesday, June 5, 2018. The operation is one of the largest against employers in recent years on allegations of violating immigration laws.

Suspects wait to be loaded onto a bus during an immigration sting at Corso's Flower and Garden Center, Tuesday, June 5, 2018, in Castalia, Ohio. The operation is one of the largest against employers in recent years on allegations of violating immigration laws.