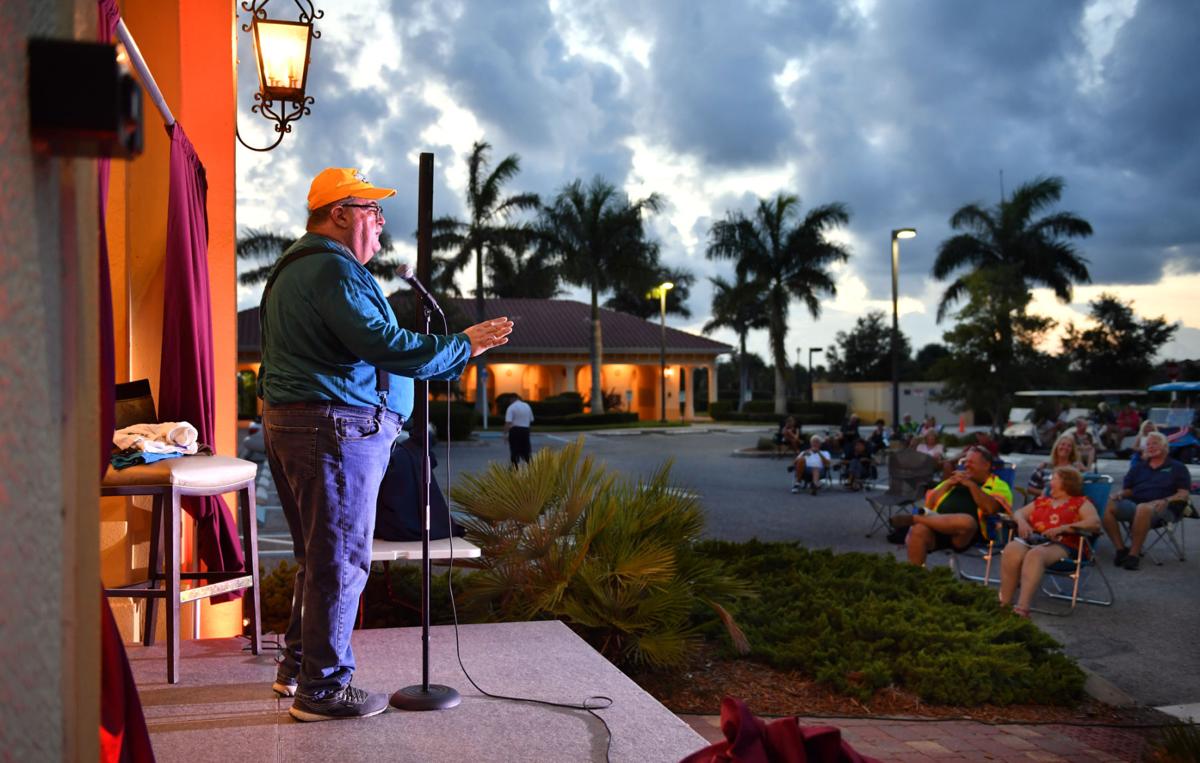 Comedian Al Ernst performs for a socially-distanced crowd gathered in a parking lot in Islandwalk at West Villages, a gated, 55+ community in Venice, Florida on July 5, 2020. Ernst has had to think outside the box to find employment during the pandemic, even taking a job wiping down shopping carts at a local grocery store. 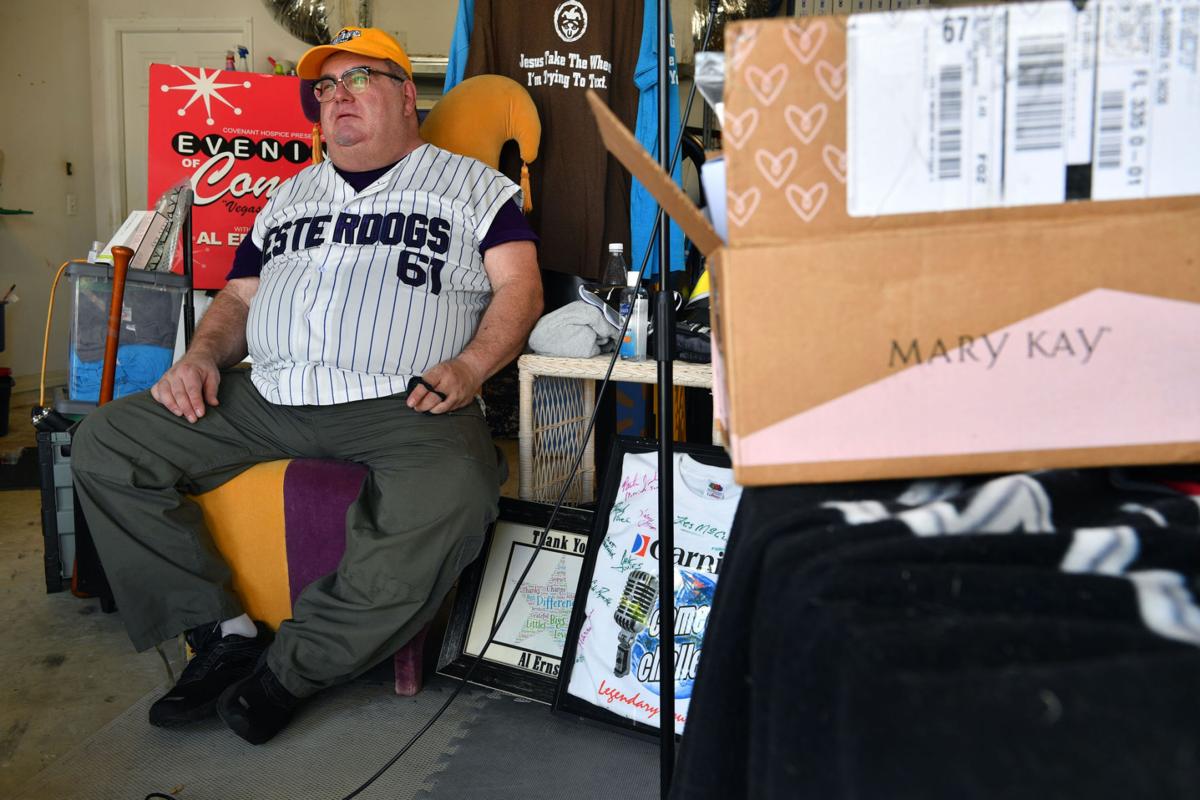 Comedian Al Ernst sits in the garage of his Sarasota, Florida home next to a recently delivered box of Mary Kay cosmetics on Thursday, Oct. 15, 2020. Ernst has had to think outside the box to find employment during the pandemic, even taking a job wiping down shopping carts at a local grocery store. Ernst has recently started selling Mary Kay cosmetics.

Editor's note: Americans have endured economic crises before but none quite like this. To capture the depths of the suffering, The New York Times teamed up with local news organizations across the country, including the Arizona Daily Star, to document the lives of a dozen Americans who found themselves out of work. Find the entire project here.

What happens when a comic can’t get a crowd? Al Ernst, 56, of Sarasota, Fla., is a stand-up comedian and a former Carnival Cruise Line entertainer of the year. He lives with his wife, Lorrie, and a puggle named Mia. These days, he’s finding unlikely ways to get by. We first spoke with him in June.

Late February, early March, I worked at The Villages retirement community and made 12 grand in two nights. Then I was supposed to go to Tampa for a show on the Carnival Paradise cruise ship. And it all went away. Now you’re looking at the chief of the cart sanitizers at a Publix supermarket.

I want to make my own way, and my entire life I’ve always worked. I don’t think I would have gotten more than the $600 federal unemployment, because I’m a gig worker. But the application was ridiculous. I gave up in June.

You look at your finances and all the little microcharges. Is this really worth $25 a month? Can I cut out my subscription to The New York Times? Cut back on cable, cut your membership to LA Fitness, you add it all up and there’s a $300 savings and you think, am I really getting my $300 worth out of this?

Being a fat guy, I’m not a good warm-weather sleeper, but now we keep the thermostat at 78 degrees. It’s been brutally hot, but you adapt.

I’m about 40 percent into my savings now.

Even with a vaccine, I sense that what we’ll be doing as entertainers is more shows and smaller audiences. It’s hard to do distance comedy because you’re trying to make a connection with an audience member in a golf cart a quarter-mile away. I have to look at their eyes now, because the laughs are muffled and hidden, but if I can see how they’re reacting with their eyes, then I’ll know who to play to.

How are cruise lines going to do it now? For them to make a profit, those ships have to be crowded. Think about those buffet lines. I want to have a career where working the ship is part of it, but not my primary venue. I want to up my variety of venues.

I’ll probably have YouTube figured out when I’m 90, and I’ll have a lot of good old-people videos on there.

I’m thinking, how weird and far out can you go? Could you legitimately, as a guy who has terrible skin care and doesn’t know one thing about this stuff – could you sell this stuff?

One of my buddies, his wife was angry because her Mary Kay representative just moved, and I said, “Don’t worry, big guy, I’ve got you covered.” And I handed him a couple of samples. She called me up later and placed an order, and I just got my first check for $250.

You have to adapt. I also bought my own radio station on Amazon for $125, so I’ve got a transmitter that hooks to an amplifier and a mic and it sends a signal out for maybe a mile and a half, but it’ll be great for my outdoor shows. I’ll set up signs that say “Tune your radio to 93.3.”

In 2004 I was working at the Funny Bone in St. Louis, and the owner said, I’ve got this daytime gig for you. It’ll pay $500 for 15 minutes at this thing called Trump University (now defunct). People were paying anywhere from $3,000 to $10,000 to attend this get-rich-quick seminar. My job was to tell jokes and warm ’em up.

I grabbed a brochure and it was worded to make you believe Donald Trump was going to be there in person. “Get your picture taken with Trump.” Turns out, it was a cardboard cutout, and they had a camera set up so you could get your picture taken. When it was over, the guy said, “Hey, that was great. We’ve got another one on Friday in Kansas City, can you do that one too? We’ve got one coming up in Tampa – can you do that one?” I said sure, OK.

Comedians usually get paid on the spot in cash or check, but this guy said, you’ll have to fill out some paperwork first and we’ll mail it to you. The weeks went by, I called and said, “Where’s my money?” and they kept saying, “You didn’t get it? We sent it to you.” Anyway, I never got paid.

A lawyer told me, we can take them to small claims court, and you’ll probably win, but it’ll cost you more than it’s worth. So I just dropped it. (The Trump Organization did not respond to a request for comment.)

Here’s what influences me when I vote: Decency and character count. Knowledge and self-responsibility count. These things make my decisions really easy.

Her fiance, Austin Eskew, said in an interview with NBC News the couple was unvaccinated due to infertility fears she had with the shot.

The FBI says a county coroner has confirmed that human remains found along the border of Grand Teton National Park are those of 22-year-old Gabby Petito.

In a series of videos on TikTok, one woman said she and her boyfriend gave Laundrie a ride on Aug. 29 in Wyoming.

The U.S. moved a step closer Wednesday to offering booster doses of Pfizer's COVID-19 vaccine to senior citizens and others at high risk from the virus as the FDA signed off on the targeted use of the extra shots.

Who is Daniel Robinson? The 24-year-old geologist has been missing for months in Arizona desert

A shooting at a Tennessee grocery store left one person dead and 12 others injured Thursday afternoon, and the shooter was subsequently found dead.

Mom asks young son to keep his mask on in school, so he refuses to remove it for his school photo

When asked to take his mask down for a school picture, Mason refused. His mother describes the moment in a Facebook post.

The Biden administration's special envoy to Haiti has resigned, protesting "inhumane" large-scale expulsions of Haitian migrants to their homeland.

Comedian Al Ernst performs for a socially-distanced crowd gathered in a parking lot in Islandwalk at West Villages, a gated, 55+ community in Venice, Florida on July 5, 2020. Ernst has had to think outside the box to find employment during the pandemic, even taking a job wiping down shopping carts at a local grocery store.

Comedian Al Ernst sits in the garage of his Sarasota, Florida home next to a recently delivered box of Mary Kay cosmetics on Thursday, Oct. 15, 2020. Ernst has had to think outside the box to find employment during the pandemic, even taking a job wiping down shopping carts at a local grocery store. Ernst has recently started selling Mary Kay cosmetics.