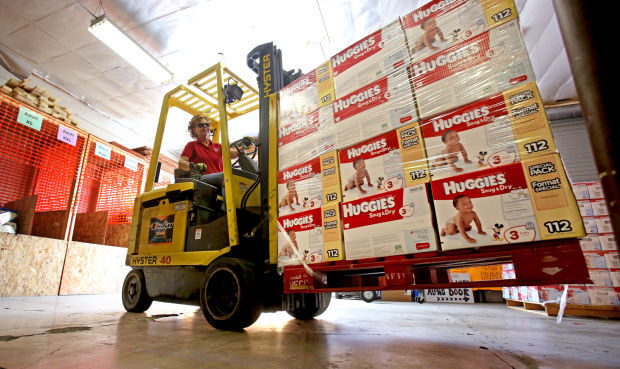 Warehouse manager Leslie Pike moves a pallet of diapers around the Diaper Bank of Southern Arizona. 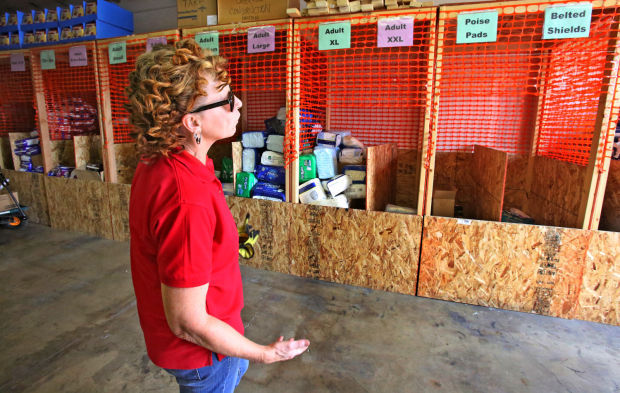 Warehouse manager Leslie Pike, with the Diaper Bank of Southern Arizona, talks about the need for all sizes of diapers. The bank distributes disposable diapers to local organizations.

Some elderly and disabled adults who need incontinence supplies can now get them at no cost, thanks to a legal victory six years in the making.

But even as advocates celebrate the news, some patients and residents are finding it doesn’t apply to them. Incontinence briefs are covered only for those who qualify for Arizona’s Long Term Care System, or ALTCS. That means they must earn no more than $2,199 a month and be disabled to the point of needing “a nursing home level of care.”

“It’s great that those on ALTCS will be eligible to receive the incontinence supplies. However, there is still a huge gap between those that are eligible for the program and the real incontinence item need in Southern Arizona,” said Claudette Langley, the outreach coordinator for the Diaper Bank of Southern Arizona.

Robyn Molk hoped her elderly aunt would qualify, but the 91-year-old woman earns $35 a month over the cap.

It’s an added stress for her aunt, who already has needs that take up money, and time. So Molk pitches in as she searches for help covering the expense, which used to be just a couple of adult diapers a day but now is up to several — totaling $250 a month.

“There are so many people on the cusp, especially now that people are living longer,” Molk said. “There are so many who could really use the help, but they are caught between a rock and a hard place. It’s just unfair.”

Adult incontinence briefs cost roughly 50 cents to $1.50 each, depending on quality and brand. That adds up quickly for older adults living on fixed incomes, said Langley, of the Diaper Bank.

Langley said about 96 percent of the agencies her organization serves provide for people living at, or below, poverty level.

As of February, there were nearly 28,000 ALTCS recipients in Arizona. The state’s Department of Economic Security estimates that roughly 1,700 members will use an average of 180 diapers per month once the changes are fully underway.

The case dates back to 2009 when the Arizona Center for Disability Law challenged the state’s original policy of providing adult diapers to treat rashes and skin infections — but not to prevent problems in the first place. Now, the briefs are covered for ALTCS’ adult members when they are found to be medically necessary for preventative purposes.

“This is such an important issue for individuals and their families,” said Sarah Kader, an attorney with the Arizona Center for Disability Law. “These are necessary for daily living, their dignity and well-being.”

She said the center is encouraging people to apply now that the barriers have been removed.

“We do understand that the Medicaid process can be long and difficult at times,” Kader said. “In order to get something, you need to show that you need it, and now they must provide them when they are medically necessary.”

The legal change has done nothing to ease demand at the Diaper Bank.

“I think that we misunderstood how many people this would be impacted,” said Langley, of the Diaper Bank. “We hoped this would help ease the need for incontinence supplies for seniors, but it turns out it’s a very specific group of people.”

So far this year, the agency has received about 11,920 donated adult incontinence products, which are distributed to partner agencies here and in Cochise, Santa Cruz, Graham and Greenlee counties. During 2014, 43,322 adult items were donated.

The Diaper Bank sent out an appeal in mid-February because its bins were empty of adult-sized diapers and pull-ups. Such supplies are often overlooked by donators, who focus more on diapers for babies.

“There’s so much need out there,” Langley said. “Getting adult supplies is one of the hardest things for us, I think, because they are more expensive, and I think people don’t necessarily realize that adults need those items.”

John Frank is filling out new paperwork to help a 53-year-old housemate who came to live with him and his wife seven years ago from Wisconsin. (They met the man while working for the Division of Developmental Disabilities there, and invited him to stay with them after his parents died).

Frank said the man, who has both Down syndrome and, now, Alzheimer’s disease, uses about four diapers per day. The incontinence started after the man turned 50, Frank said. Their Division of Developmental Disabilities’ caseworker encouraged them to apply for help with the diapers, and they were getting them delivered until just a few months ago.

”I called and was told what I need to do is go to his primary- care doctor and get a script,” Frank said.

Some ALTCS and DDD members were receiving this benefit as part of their original claim, said Nicole Moon, a DES spokeswoman.

Jean Barwig is also a caregiver to a developmentally disabled adult, a 66-year-old woman who has struggled with incontinence for more than two years.

Barwig said after she received the letter about the ALTCS changes in late February, she set out to get broader coverage in place. For the last couple of years, they have been paying out-of-pocket to cover the diapers even though UnitedHealthcare — one of three ALTCS plan providers — offered them about 60 diapers for free every three months.

“She uses three to four a day, so that doesn’t cover it,” Barwig said. “It’s certainly a godsend that they are providing diapers now, because it’s expensive.”

Molk, who is helping her elderly aunt, said it’s frustrating that people have to fall below poverty level to get help.

Out of her monthly income, Molk said her aunt pays for 12 hours of in-home assistance each week, at $800 per month, as well as a mortgage of $800 per month. She is left with around $500 to pay for food, utilities and diapers.

They have received some help, about one pack per month, from the Pima Council on Aging.

Each year, the council distributes about 12,450 adult incontinence items — not only diapers, but also bed pads and bladder pads. That’s an average of about 1,038 items per month that come in as donations, either through the Diaper Bank, direct donations or donations from MedTech and Personally Delivered, two companies that specialize in aids for daily living.

Guadalupe Corrales stopped in at the Diaper Bank for the first time last week, desperate for some help. He left with one bag of 20 diapers.

Corrales cares for his 85-year-old wife, who has Alzheimer’s. He is hoping they can get assistance through ALTCS, but he hasn’t had time to apply yet. Other than a home-health worker coming for about eight hours each week, he is his wife’s sole caregiver.

He said he has been buying diapers for about three years. He gets some, about 72 per year, through UnitedHealthcare, he said, but those last less than two months.

“The money we receive, we try to make it last,” he said, speaking in Spanish. “We have become accustomed to depriving ourselves of many things.”

If a person is found eligible for ALTCS, then a doctor must provide a prescription for the briefs. No more than 180 briefs will be provided per month unless a doctor says more are needed, information from the Arizona Department of Economic Security shows.

(To learn more about qualifying and what is required, visit https://www.azahcccs.gov/applicants/application/ALTCS.aspx)

Arizona Gov. Doug Ducey pointed out the new law won't take away anyone's right to vote. GOP lawmakers said it will prevent voter fraud; some Democrats accused them of not wanting people of color to vote.

A rail connection between Arizona’s two largest cities hasn’t been seen since a deadly derailment in 1995 and a lack of funding to upgrade the tracks.

11 charts that show where home sales are headed in Tucson

Are prices headed up or down? Where are the hotspots for buyers and sellers? Find out with these charts and graphs, updated weekly.

Warehouse manager Leslie Pike moves a pallet of diapers around the Diaper Bank of Southern Arizona.

Warehouse manager Leslie Pike, with the Diaper Bank of Southern Arizona, talks about the need for all sizes of diapers. The bank distributes disposable diapers to local organizations.