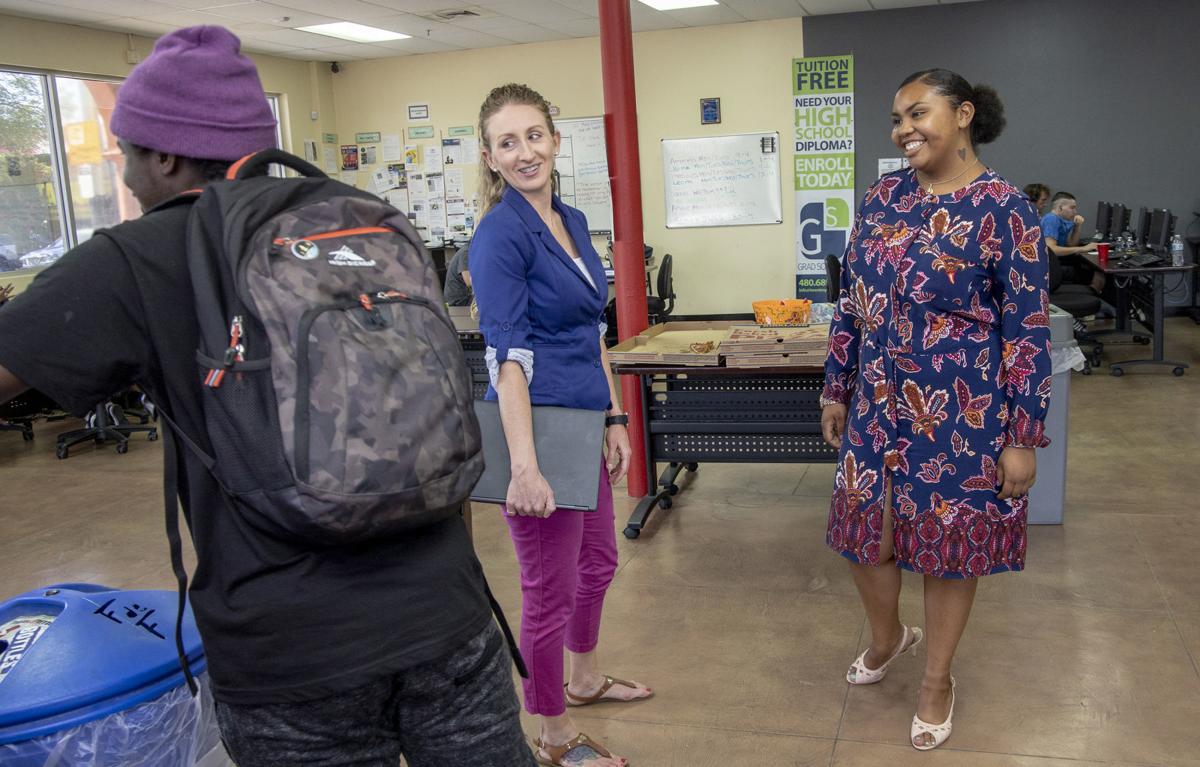 Placement supervisor Angie Lopez, center, and Janessa De La Cruz talk with a participant in the Goodwill Metro/REC program. De La Cruz was a “crossover kid,” involved in delinquency after first walking into Juvenile Court as a victim of neglect or abuse. 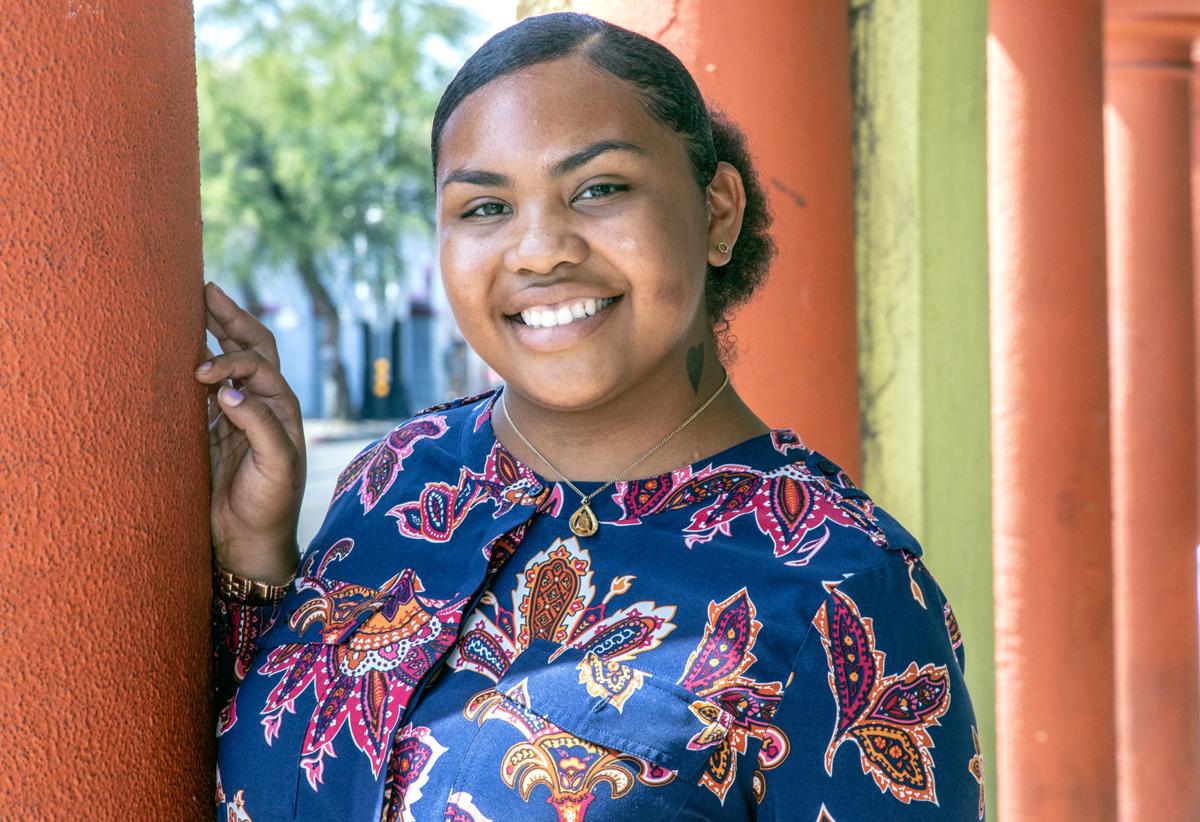 Janessa De La Cruz, 18, is working for AmeriCorps and finishing her GED. She has benefited from a cooperative program involving state and county juvenile-service agencies.

Janessa De La Cruz is employed, finishing school and dreaming big in spite of the systems in place to help her, not because of them.

And that’s what the Pima County Juvenile Court Center staff who work with youths — ones like De La Cruz who were abused or neglected and then get arrested — are trying to change.

De La Cruz, who turned 18 in March, was what’s referred to in court lingo as a crossover youth. These are the kids who pick up a delinquency case after first walking into the court as victims of neglect or abuse.

Crossover kids are the ones who could see the worst outcomes as they age, including dropping out of school, mental-health challenges, addiction and, eventually, time in adult prison.

“The deeper into the system they go,” said Juvenile Court Judge Joan Wagener of these crossover cases, “the worse their outcomes.”

If the teens and adolescents are to avoid these significant risks, in other words, they need help fast.

That’s what’s behind the Crossover Youth Practice Model, or CYPM, that the court started here last month. It’s a new way of going about these cases and it requires collaboration between two systems that typically don’t work together: the Arizona Department of Child Safety and the county’s Juvenile Probation Services.

Other counties in Arizona have either already enacted these changes or are in the process of doing so.

Traditionally, each of these agencies has operated within its own silo without doing what now needs to happen: sharing information, condensing court time and, ultimately, figuring out how to help the kids and their families.

The approach was developed by the Center for Juvenile Justice Reform at the McCourt School of Public Policy at Georgetown University and is already being practiced in more than 100 communities nationwide.

It’s not promised to be an easy undertaking, but Pima County can look to those other counties and states that have already made the change despite the differing approaches, privacy restrictions and other issues that complicate the kids’ cases and their lives.

“Show me I matter”

De La Cruz and her younger brother were first removed from their home when she was 12. They lived with relatives for a year before returning home, but by the time she was 14, they were taken again and placed in a Tucson group home .

She was 15 when she ran away and then got arrested on drug charges in Santa Cruz County.

Her first court appearance, which is required to happen within 24 hours, had to be postponed because she says no one could reach her DCS caseworker by email or phone. And that caseworker not only needed to be at the hearing, she was also the only person who could approve De La Cruz speaking to her mother from detention.

A week passed before the caseworker got in touch.

“I was scared, I was mad at myself (for the arrest), but mostly I felt really alone,” De La Cruz said.

The time is detention was similar to her time in the group home: She felt she was drifting, with no adults in her life with any consistency. She had to push to get just a bit of information about her case or her family. She said the other teen girls she met along the way felt the same.

“We’d have nobody to talk to,” she said. “We couldn’t even talk to our moms.”

Eventually, De La Cruz pleaded guilty to drug possession and was sentenced to a year of probation. The Santa Cruz County judge in the case was one of the first adults De La Cruz felt really cared, and it inspired her to do better.

“She read my letter to the court and she responded,” she said. They talked about De La Cruz’s future, and the teen left with some new ideas about her life.

But De La Cruz’s resolve was hindered by the chaos in the system.

It ended up taking her two years to finish one year of probation because she kept being moved, first in Santa Cruz County, then to a group home in Maricopa County and then, finally, back to Pima County.

There was no collaboration, no clear plan.

“You took me out of my home and you’re supposed to be my guardian,” she said of the child welfare system overall. “I need you to show me that I matter.”

Pima County’s Juvenile Court Center is starting to gather more data on crossover youths after collecting a bit in fiscal year 2016, when the county first began moving toward this change.

Kids who have been abused or neglected and then end up with delinquency cases are often ethnically diverse and live in group homes. Girls, usually outnumbered by boys in delinquency cases, are at much higher risk for delinquency when they first come into the court system due to abuse or neglect.

The changes underway now include training DCS caseworkers and juvenile probation officers so they can better understand what the other side does, said John Jackson, assistant division director for probation services at the Juvenile Court Center.

The goal is to have them help one another through collaboration and regular communication, he said. It’s also about having everyone involved understand the strong link between child abuse or child neglect, and delinquency.

Heavy caseloads are down for caseworkers, said DCS program specialist Czarina Valadez, so there is time for these new approaches. She said all current caseworkers in Pima County have been trained about what do if they have a crossover case.

It’s not only changing the way DCS caseworkers and juvenile probation officers share information, but also how they talk to the kids that can help tremendously, said Bryant Grantling, the DCS executive assistant for support services.

He said when he first started handling cases for DCS, he was focused on getting quick answers and would “ask the wrong questions.” The result was that kids who were already ashamed and frightened closed him off and the cases stalled.

Now, with a collaborative approach that’s more child-centered, he hopes the crossover kids can open up more and find more adults who can help, whether it’s family members who might not be in the picture yet or a mentor who might otherwise go untapped.

To help prevent kids’ cases from lingering, as De La Cruz’s did, there are protocols in place about how quickly the probation officer and the DCS worker need to contact each other. If the youth is in detention, for example, it needs to happen within 24 hours.

Ideally, the changes will help cut back on work for those involved, not add to it, said Judge Wagener.

“A Testament to her”

De La Cruz has completed her sentence and now works part-time for AmeriCorps. She will receive a college stipend when she is done.

She’s building a different relationship with her mother, who is working through her own issues and has been sober for several months. She’s also trying to schedule visits with her father, who is incarcerated.

As a young African American and Tohono O’odham woman, De La Cruz is especially interested in issues that pertain to minorities being over-represented in the court system, a phenomenon called disproportionality.

As part of her AmeriCorps work, which she carries out through the Juvenile Court Center, she recently helped organize a block party for the Palo Verde Neighborhood that included resource booths, free food and activities geared, in part, to reducing disproportionality.

She asked people who attended a lot of questions about their lives and is entering that information into a computer system so they can figure out what more is needed to help the community.

De La Cruz is also working on kid-friendly pamphlets to help children and teens who end up in court cases, whether because of abuse or neglect or because they have a delinquency case.

She’s excited to be doing what she can to help others who are going through what she went through.

De La Cruz said Palmore, who was her counselor toward the end of her time in the child welfare system, made a tremendous difference in her life.

“He opened my mind and made me realize that I do have a voice, that I can say stuff,” she said.

“I was completely honest with him all the time about what I was going through.”

She is working on her GED now, but is not sure exactly what she wants to do next.

“Whatever I end up doing, it’s going to be positive,” she said. “I’m going to make an impact somewhere.”

Recent launch of 60 satellites will provide internet access to remote areas; is just the start of such ventures.

"Thrive in the 05" pairs the city of Tucson and ASU to address deep social issues, Tucson House makeover and more.

Placement supervisor Angie Lopez, center, and Janessa De La Cruz talk with a participant in the Goodwill Metro/REC program. De La Cruz was a “crossover kid,” involved in delinquency after first walking into Juvenile Court as a victim of neglect or abuse.

Janessa De La Cruz, 18, is working for AmeriCorps and finishing her GED. She has benefited from a cooperative program involving state and county juvenile-service agencies.