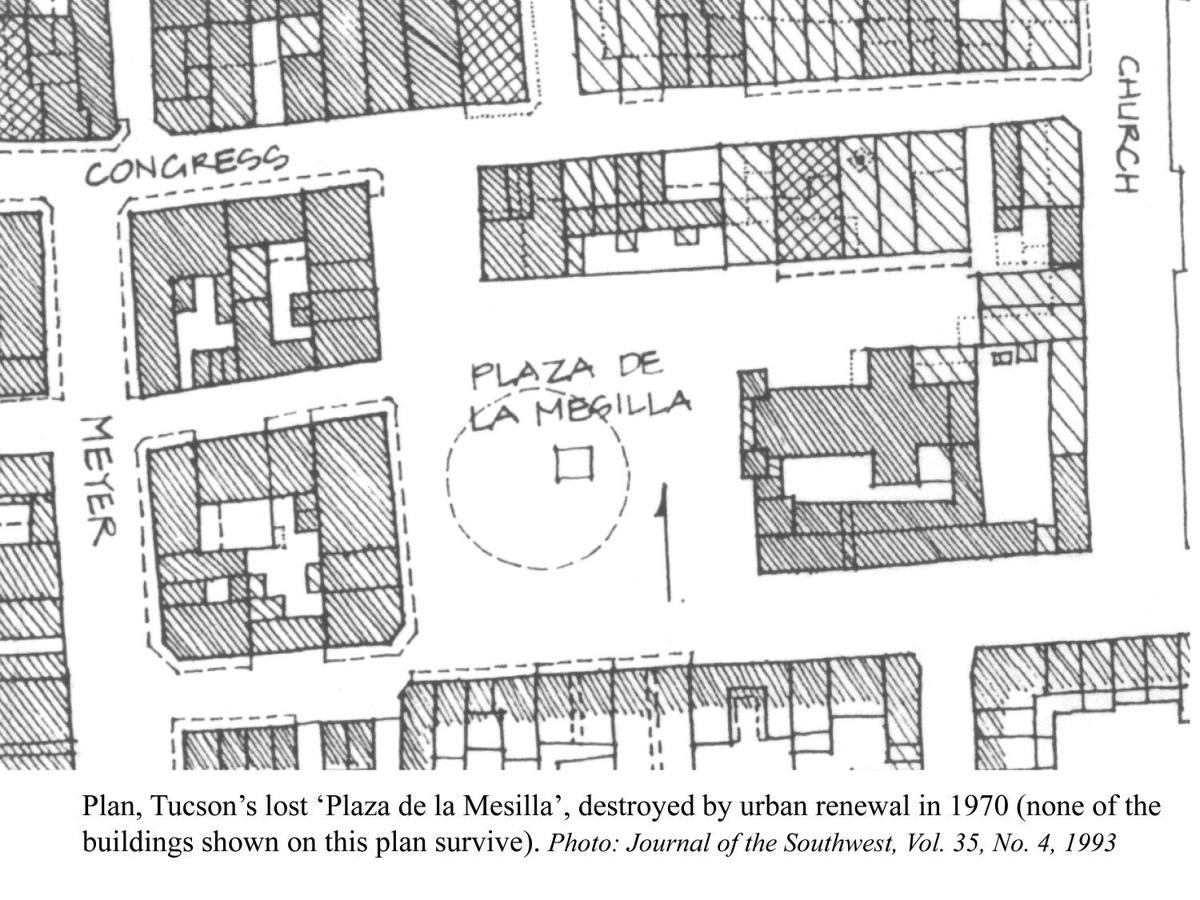 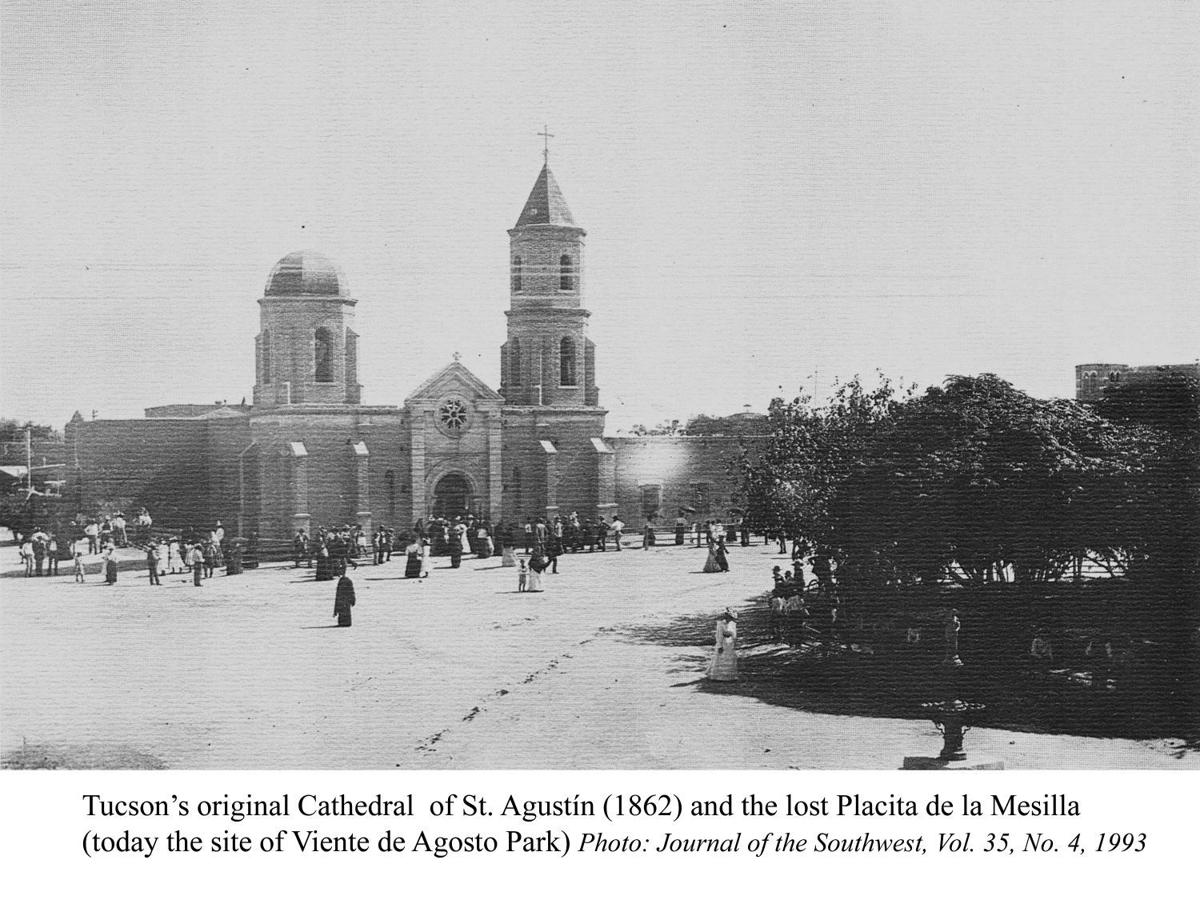 Tucson’s original Cathedral of St. Agustin (1862) and the lost Placita de la Mesilla were like a desert oasis, surrounded by Sonoran-style architecture, shade trees and benches. 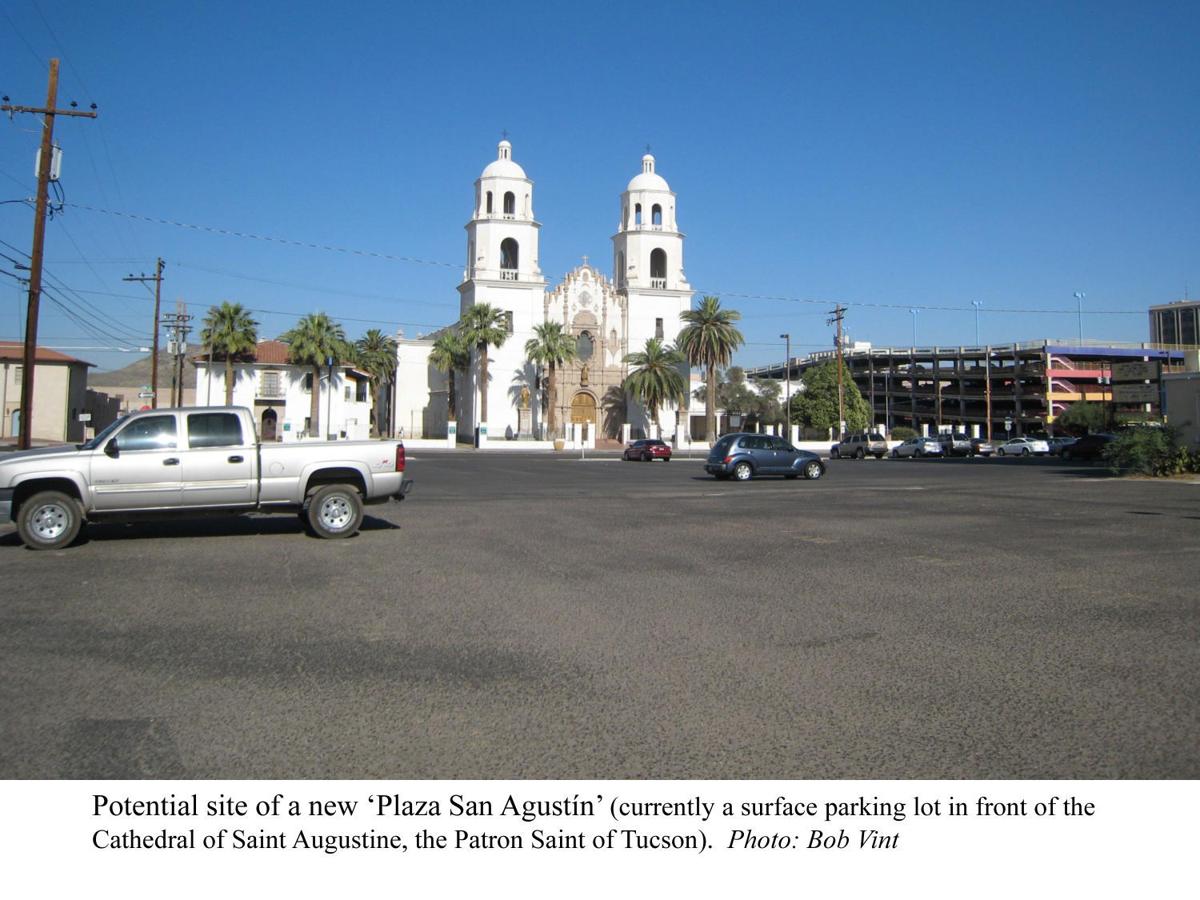 The potential site of the new Plaza San Augstin is currently a parking lot in front of the St. Augustine Cathedral, 192 S. Stone Ave., east of the Tucson Convention Center.

On Aug. 20, 1775, Spanish explorers founded a town on the banks of the Santa Cruz River. They named it San Agustín del Tucsón, honoring both the original Native American place name (Chuk-shon, in the O’odham language) and Augustine, the Saint to whom they dedicated their new colonial settlement.

Tucson was first laid out around a plaza following “the Laws of the Indies,” decreed by the Spanish Empire to guide the building of towns and cities in New Spain (including Arizona). Many great cities throughout Latin America, north and south, began with such a central plaza.

Tucson’s original plaza was called La Placita de la Mesilla (Little Plaza on the Mesa) as it was located on a small rise above the flood plain of the Santa Cruz. The square open space was surrounded by Sonoran-style architecture, with shade trees and benches in the Spanish and Mexican tradition — an oasis in the desert, a symbolic and physical heart of the town. On the east side of the plaza stood the Cathedral of San Agustín.

Sadly, this historic heart of our city was lost to urban renewal in the 1960s. The site of Tucson’s original plaza is now occupied by the grassy traffic median known as Veinte de Agosto Park, ironically commemorating the date of Tucson’s founding 240 years ago.

With the growth of Tucson, a larger cathedral was built on South Stone Avenue. Ever since the abandonment of downtown following urban renewal half a century ago, the space across from the cathedral has remained an asphalt parking lot. This is an anomaly, because any city worthy of its name has a beautiful plaza at its heart, oriented toward a distinguished historic building such as a town hall, a courthouse or, in the Hispanic tradition, a cathedral.

Yet this vacant parking lot leaves open the possibility of creating a new plaza on what’s now a barren asphalt wasteland. For the past several years, a group of Tucsonans has dreamed of exactly that. Led by Chris Tanz and Jean-Paul Bierny, local citizens formed The Plaza San Agustin LLC to advocate for the inclusion of a traditional plaza in the city’s downtown plan, to be located on the 0.9-acre parcel in front of our historic cathedral.

We have been a part of this group, exploring the potential for creating residential and commercial space along with an active, open pedestrian area on this site. With room for shade trees and a fountain, ground-floor shops and cafes opening onto a central plaza could bring the development to life. Residences, either for sale or rent, could occupy the upper three or four floors, combining for a truly unique and highly desirable environment.

New downtown residents become customers for new downtown businesses, activating the street level and providing the essential “eyes on the street” that improve security and safety, as shown by the great urbanist Jane Jacobs.

With the resurgence of Tucson’s downtown, an opportunity to realize this vision has emerged, as the land fronting St. Augustine’s is under new ownership with the intent to build. We hope the new owners will embrace the vision we and other members of the plaza group have shared with them, to strengthen Tucson’s unique sense of place, shaping the future while respecting the past.

Historically and culturally, this is a sensitive site. It’s located in the center of key downtown destinations, including the Temple of Music and Art, the Leo Rich Theater, the Music Hall, the Fox Theater, the Children’s Museum, Armory Park and the new street car on Congress. A plaza in this location has the potential to connect and support all these elements.

For Tucson to grow into a truly great city, our downtown needs a heart and soul. A plaza before the historic cathedral will provide this essential element. It will be an affirmation of our heritage, a way of connecting culturally with Mexico, and a wonderful new place — the very meaning of plaza — that resonates with Tucson’s history.

Linda Ronstadt is a third-generation Tucsonan and multi-generation Sonoran and a member of the Rock and Roll Hall of Fame.

Bob Vint is a native Tucsonan, a practicing architect responsible for the preservation of San Xavier Mission, and an adjunct faculty member in the University of Arizona College of Architecture, Planning and Landscape Architecture. Contact him at

Tucson’s original Cathedral of St. Agustin (1862) and the lost Placita de la Mesilla were like a desert oasis, surrounded by Sonoran-style architecture, shade trees and benches.

The potential site of the new Plaza San Augstin is currently a parking lot in front of the St. Augustine Cathedral, 192 S. Stone Ave., east of the Tucson Convention Center. 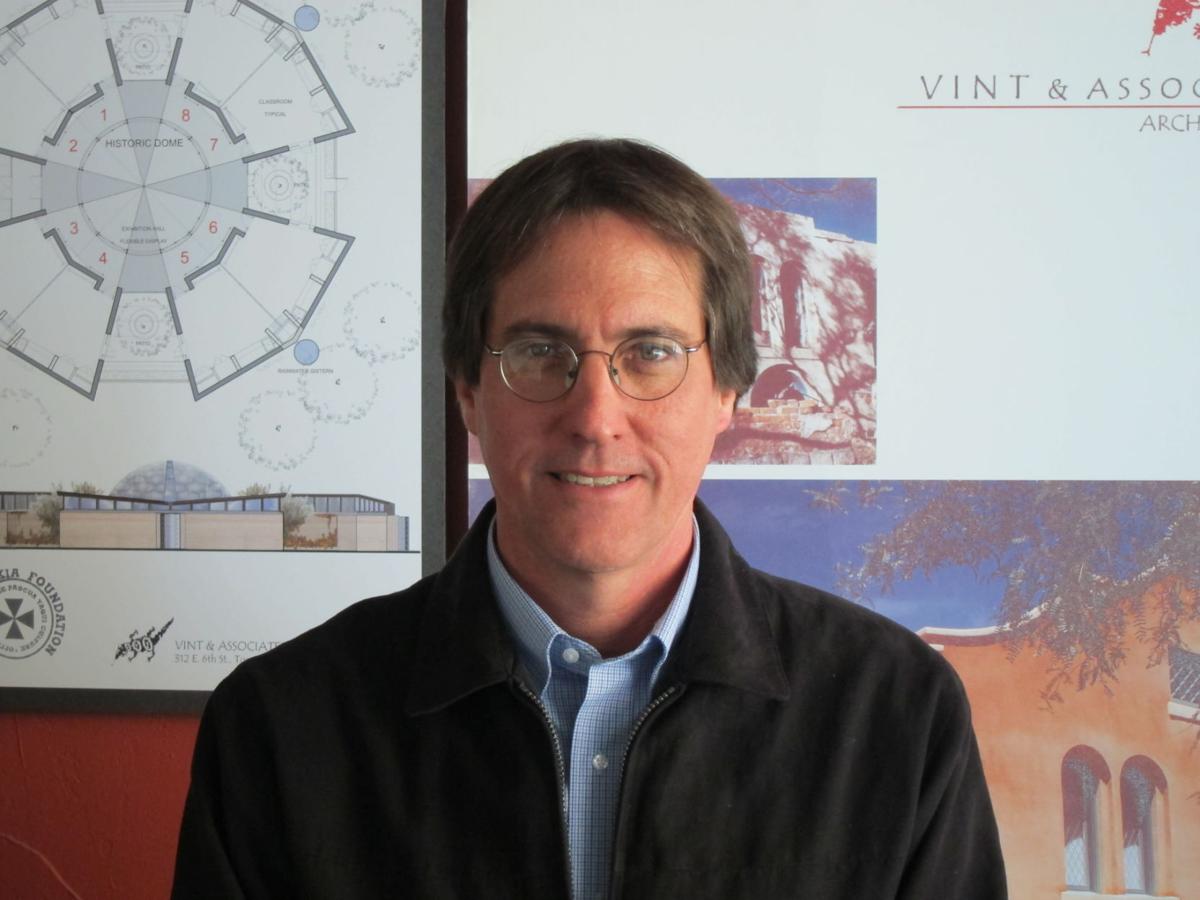 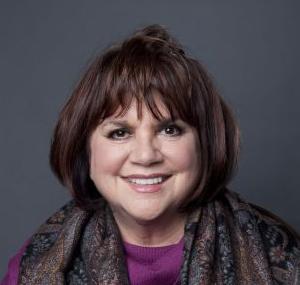