Patricia Savulchak’s 16-month-old great-granddaughter climbed into her lap and leaned against her chest. Sandy-haired and blue-eyed, Layla looks like her mother did at that age.

Savulchak brought up her children, then helped raise her grandchildren, in this aging wooden house in a working-class neighborhood in west Pittsburgh. But she never planned to be raising her great-grandchildren here at age 73.

Layla’s mother, Kristian, was 22 when she died of a heroin overdose last year, a casualty of the opioid epidemic ravaging Pittsburgh. To keep Layla and her 3-year-old brother Cameron from going into foster care, Savulchak agreed to take them in when it became clear their birth father didn’t have the money or housing to care for them.

“I wasn’t letting nobody take these kids and put them in a stranger’s house,” she said. “I just had to take them and do the best I can.”

But Savulchak knew she couldn’t afford to care for the children, or get through the cumbersome process of getting licensed as a foster home, without help.

She got it from A Second Chance, a Pittsburgh-based nonprofit devoted to licensing and supporting kinship foster families. The agency sent a worker to Savulchak’s home repeatedly to walk her through the required foster care training and paid for upgrades to her home to make it safe for the babies.

Traditional foster homes are licensed before their first foster child is placed with them. But kinship foster families receive the child first, before they are eligible for the financial support that comes with foster-care licensure. In Allegheny County, kinship families begin getting foster care payments at the time of placement to ease the transition as the family works to get licensed.

Savulchak receives about $1,200 a month to help pay for her two great-grandchildren’s needs, as well as ongoing support from the agency.

Twenty years ago, 76 percent of Allegheny County children in out-of-home care — about 2,100 kids — were in traditional foster care, with just 9 percent in kinship care. Today, thanks to A Second Chance’s laser focus on helping kinship families get licensed, nearly 60 percent of children in custody are in kinship care and 30 percent are in traditional foster care.

Crucially, virtually all of those kinship placements are licensed as foster homes. The county pays $12.3 million to kinship families, compared with $9.4 million to traditional foster homes.

Kinship placements have been shown to be more stable, and less traumatic, for children than traditional “stranger” foster care. Kinship care often allows children to remain close to their own neighborhood, with their siblings and in the same school, reducing disruption to their lives and paying dividends in improved outcomes for kids.

Contrast that with Arizona, where advocates say kinship placements often aren’t even advised of the benefits available to them. That includes the option to get licensed as a foster home in order to receive a monthly stipend from the Department of Child Safety, Arizona’s child welfare agency.

Without financial and emotional support, a kinship placement is more likely to fail — and that failure can change the trajectory of a child’s life, McDaniel said.

“If they fail at Grandmom’s house, they go into congregate care. It’s just a pipeline to being deeper in the system,” she said. “Group care, getting into delinquency, running away, homelessness, sex trafficking. ... It goes on and on and on.”

McDaniel, who grew up in kinship care herself, said Arizona is behind the curve in terms of support for kinship families. A few years ago, she offered DCS a free assessment on gaps in Arizona’s kinship program. Agency leaders declined the offer, saying they had too many initiatives ongoing at the time, she said.

DCS “really takes a very conservative approach,” she said. “They don’t need more foster homes. What they need is a different approach to kin at the front door, really an attitudinal shift in how they do family.”

The vast majority of kinship families in Arizona don’t get licensed as foster homes, so they only get about $1 per child per day in financial support from DCS. Licensed foster homes get about $600 per child each month, varying based on a child’s age and needs.

Forty-five percent of Arizona foster kids are in those unlicensed kinship placements, said Kris Jacober, executive director of the Arizona Association of Foster and Adoptive Parents.

“They fend for themselves and try to make it work,” she said. But too often those families need more help than they get and the children end up being sent to “stranger” foster homes or group homes, she said.

“They’re saying, ‘I don’t have food in the refrigerator, I can’t pay rent. I cannot care for these three or four children anymore.’ “

In Arizona, a $75-per-month federal “grandparent subsidy” is available for low-income kinship caregivers who are not licensed as foster homes. But too often, no one even tells those kinship families about what benefits or options are available to them, kinship caregivers and advocates say.

DCS deputy director Mike Faust said agency staffers are supposed to tell kinship families of their option to get licensed.

“It is communicated at placement, it’s on the website, but there’s a lot going on for these families,” Faust said. “For us to say it multiple times is always in the best interest of all parties.”

Getting kinship families licensed requires a level of engagement that hasn’t been happening in Arizona, McDaniel said.

“Sometimes Grandmom’s resistance looks like she’s not interested, but she’s really upset,” McDaniel said. “It really is about engagement, allowing families to emote and then engage.”

Sometimes Arizona kinship families want to get licensed as foster homes but fail the safety inspection’s strict guidelines, said Julie Treinen, director of kinship support services for Arizona's Children Association in Tucson. Relatives who have medical marijuana cards must surrender them if they want to get licensed. Families without a gate around their pools — a common scenario — also can’t get licensed.

DCS still places the child with those “unsafe” family members, but without the financial help that would have come with licensure.

Andrea Zukowsky, 67, is caring for her four grandchildren, ages 13, 9, 6 and 23 months. The three eldest have been diagnosed with post-traumatic stress disorder from past abuse. Zukowsky said she’s fortunate to have paid off the mortgage on her home, but she lives on $1,300 a month — her widow’s benefits through Social Security — and struggles to cover the basics for her grandkids.

Financial help from DCS is a drop in the bucket: As an unlicensed formal kinship placement, she gets $30 per child each month. As a licensed foster home, she’d get $630 each month per child.

The family’s DCS caseworker didn’t tell Zukowsky about the option of getting licensed or refer her to the kinship support services available through Arizona’s Children Association in Tucson, she said. It was by chance that Zukowsky learned about kinship support services offered through the association’s Kinship and Adoption Resource and Education Center in Tucson — her grandson’s Sunday school teacher works there.

Zukowsky said the center has been an enormous support. She’s taken parenting classes there, and attended sessions on how to engage with traumatized children. She also goes to a weekly support group for relative caregivers, which helps her feel less alone.

But the kinship support center, one of the most crucial resources for Pima County kinship caregivers, is funded primarily by a federal grant, and its current three-year funding expires this year, said Treinen, of the Arizona's Children Association.

Zukowsky started trying to get licensed a few months ago but gave up. The licensing agency said she would have had to replace her 60-year-old home’s windows since they are all painted shut, and she can’t afford to do that.

“I’m not being greedy, but these kids need more than I can give them,” she said. “They need so much more.”

“We would absolutely help her with replacing her windows,” she said. “We look at the value of windows versus the value of a caregiver being able to support their grandchildren long-term. ... We license in, rather than license out.”

For the first year Zukowsky’s grandchildren lived with her, the three eldest insisted on sleeping in her bed because it was the only place they felt safe. Zukowsky slept on a recliner in the living room, waking regularly throughout the night when the children sought reassurance that she was still there.

They seem more at ease these days.

“They’re now with Nonna,” she said, “and Nonna’s going to make sure that nothing happens to them.”

• Nationally, the percentage of foster youths who finish high school is 50 percent, compared with 95 percent for those in A Second Chance, a Pittsburgh-base nonprofit that helps families get licensed as foster parents for relatives.

• Only 5 percent of A Second Chance's children have to change schools when first entering care, compared with 56 percent of foster youths nationally.

• Teen pregnancy rates for foster youths nationally is 33 percent, compared with 1 percent for girls after they enter care with A Second Chance.

While traditional foster homes get trained and licensed before they can receive a foster child, kinship homes usually have children placed with them with no time to prepare. The provisional license would allow the family to immediately receive financial support from the state at the time of placement, helping to cover additional expenses as the family gets fully licensed.

The bill was not heard this session, probably because of its $75 million per year price tag, Clodfelter said.

To make a donation to Arizona's Children Association's kinship support center, call 800-944-7611 or visit arizonaschildren.org/donation-form. In the comments section, specify that your donation is for kinship services.

Witnesses told officers the drivers of two vehicles exchanged gunfire then drove away.

UPDATES: Tucson area coronavirus developments, May 24: Here's what we know

The woman faces DUI and aggravated assault charges in connection with the fatal crash.

Coronavirus cases in Arizona, mapped by county: May 16 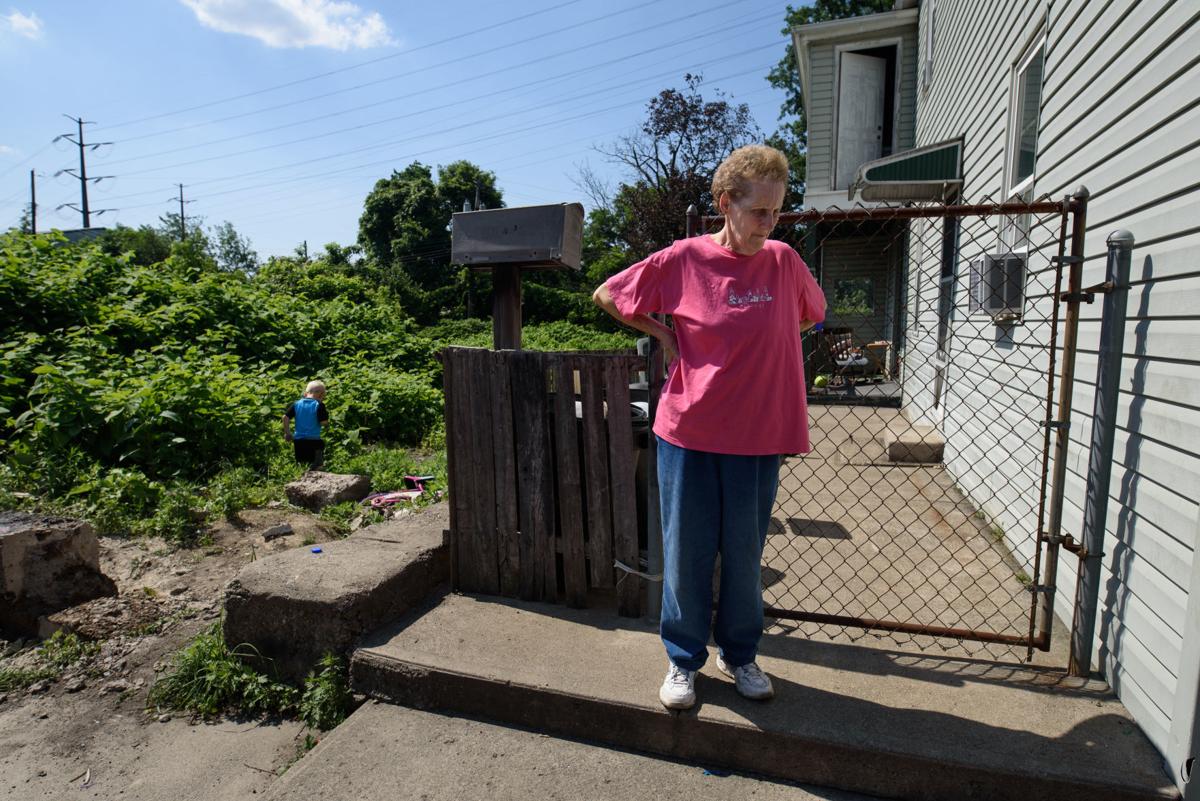 Patricia Savulchak of Pittsburgh never expected to be raising her two great-grandchildren, but when their mother died of a heroin overdose last year, “I wasn’t letting nobody take these kids.” 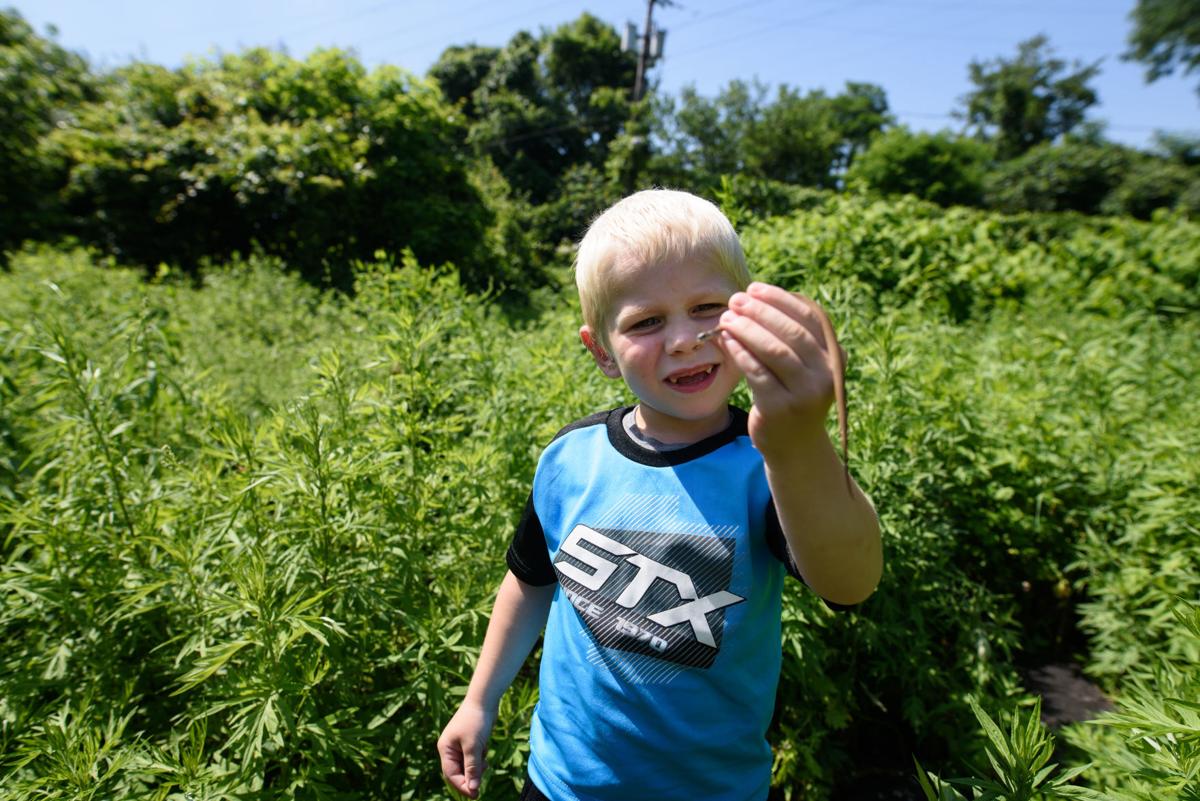 Cameron Gorman, 3, holds a snake he found on a vacant lot next to his great-grandmother’s house on June 10, 2017 in Esplen, a neighborhood in Pittsburgh, Pa. Gorman began living with with his great-grandmother, Patricia Savulchak, 73, who has kinship caregiver status, after his mother died of an opioid overdose in March. 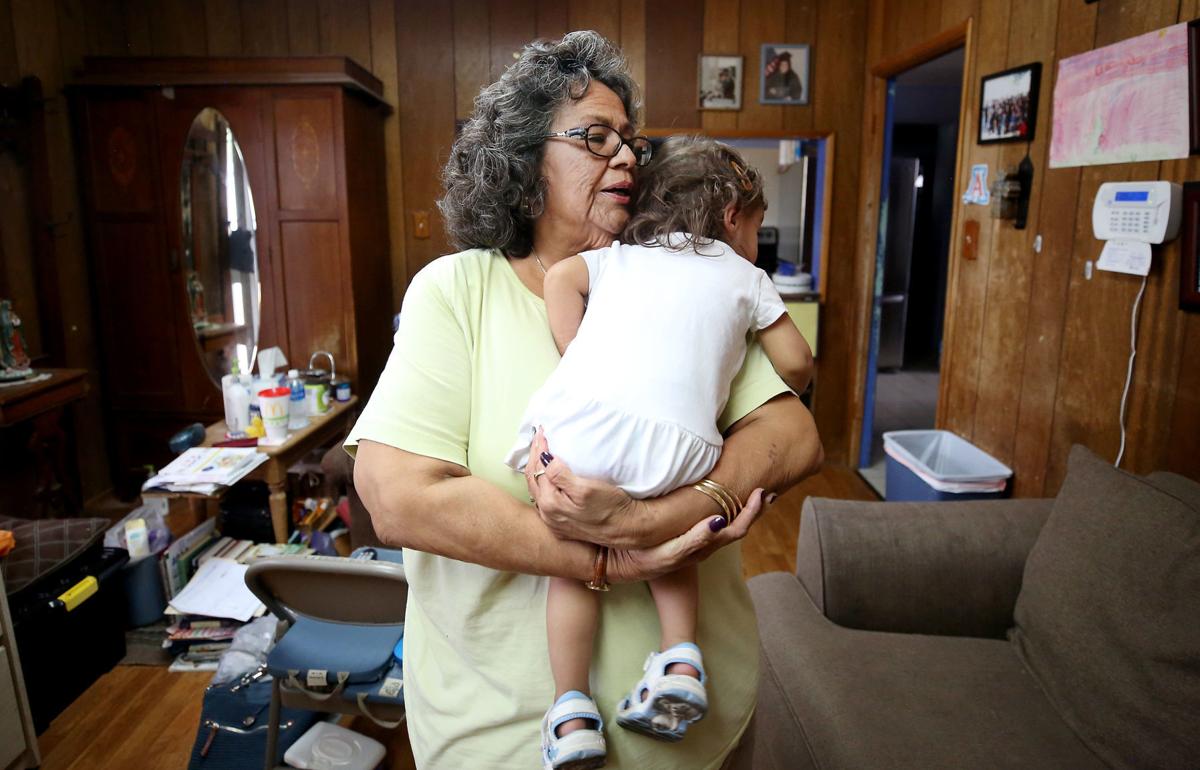 Andrea Zukowsky comforts her granddaughter as she wakes up from an afternoon nap on November 13, 2017. Zukowsky, 67, is a kinship caregiver to her four grandchildren. 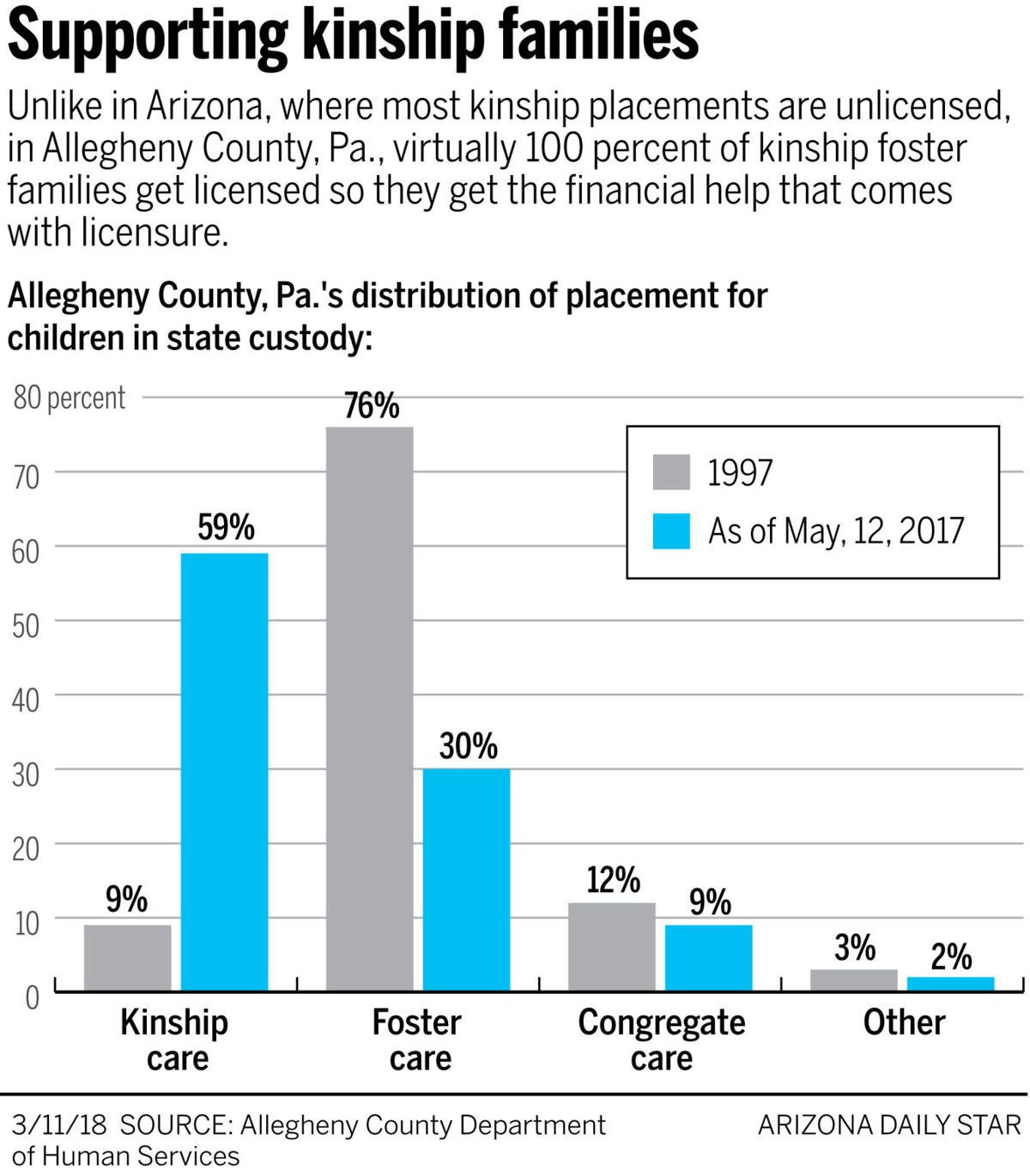