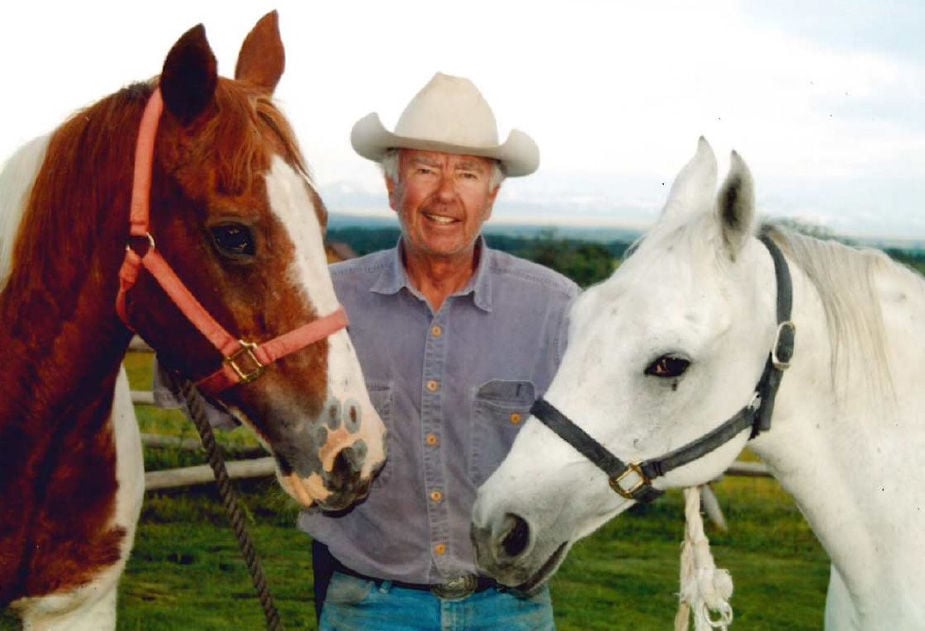 Peter Backus with two of his horses. The darker horse is Valentine, mother of Kali, namesake of Kali Drive. 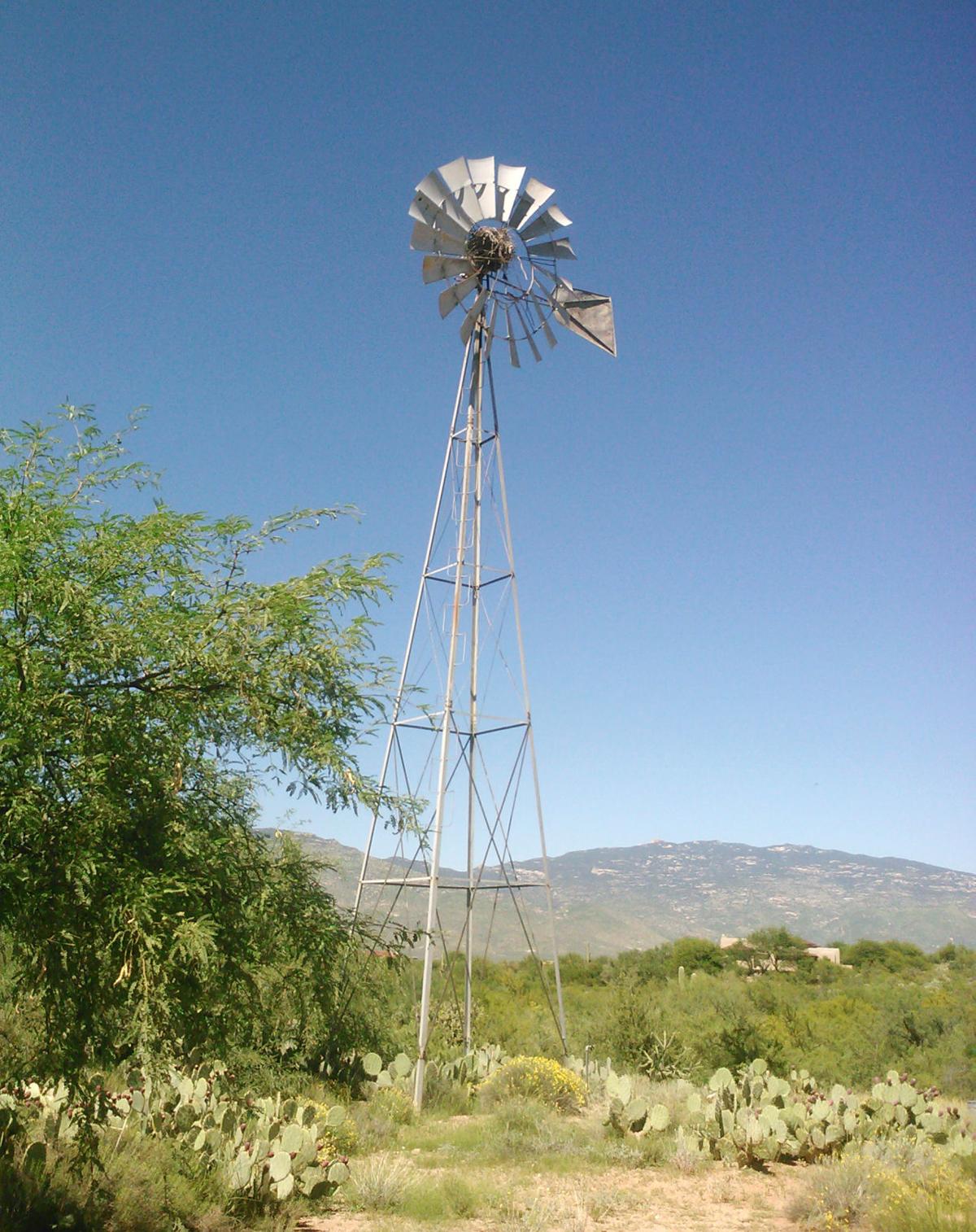 The old bullet-ridden windmill and raven’s nest near the Coyote Creek office. 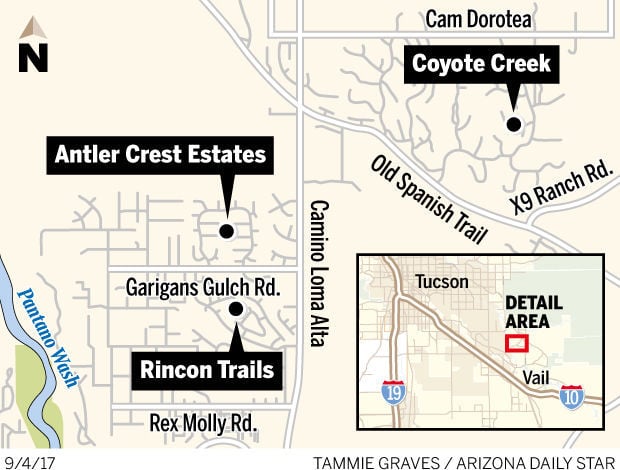 If you’ve ever wondered how developers name the streets in their subdivisions, Peter Backus’ many and varied methods are illustrative.

Backus might have ended up as a developer naming streets in his native Madison, Wisconsin, where he grew up, instead of in the Old Pueblo.

But when it came time for him to choose a college, his father recommended the University of Arizona. Backus’ parents had spent their honeymoon in 1934 in Tucson at Flying V Ranch (namesake of Flying V Ranch Road), which is now Loews Ventana Canyon Resort, and fell in love with the small town.

So, Peter attended the UA and majored in business, graduating in 1963 and developing passions along the way for exploring the West, visiting Mexico and riding horses.

After working in Tucson for Sam Alford and his Commercial Brokers, Backus began his own business, PB Trading Co., in 1983.

In 1994, Backus and some partners were looking at some land just north of Garigans Gulch Road for a potential subdivision. While walking around the land, Backus found deer antlers on the crest of a small hill and took them home. After the partners purchased the land from the Garigan family, they began working with an engineer and had to come up with a subdivision name. Backus chose Antler Crest because he found those antlers on the crest of that small hill.

In 1997, he began to develop the Rincon Trails subdivision, on land just south of Antler Crest that he bought around 1986. The name Rincon Trails derives from the fact that Backus served on the Pima Trails Association committee headed by Steve Anderson, whose goal was to keep trails open.

Backus planned to have a riding/walking trail beginning in Rincon Trails going north through Antler Crest and onto present-day Saguaro National Park East, but the trail has yet to be completed.

For these street names, Backus devised the idea of combining parts of two people’s first names. After creating several such names, he wrote them down on the subdivision map. Then he changed his mind and decided to go with the more traditional Spanish names, but forgot to remove one small street name, Dakim Drive (pronounced Day-kim) named for David and Kim Henry, the best man and matron of honor at Backus’ 1997 wedding to his wife, Debbie.

Long active in Big Brothers Big Sisters, Backus named San Esteban (St. Stephen) Drive, a play on words, for a little brother from a Big Brothers Big Sisters program named for Jorge Esteban Salazar; Camino Cabalgata (Mounted Procession of Riders Street) for a California business Backus worked for after college, where he took tourists to Mexico for horseback riding; and Kali Drive for the offspring of his horse, Valentine.

After this, he decided it would be quicker to pay someone to come up with names for him and he hired a Pima County-approved Spanish-English translator to name the rest of the streets.

In 1998, Backus began planning a subdivision along Old Spanish Trail near Coyote Wash. He decided to call it Coyote Creek, a name derived from the nearby wash. The following year he named the streets in the subdivision.

Hat Creek Ranch Place is named for an old cowboy hat Backus found one day in the wash he calls Little Coyote Wash because it feeds into the Coyote Wash. The street travels across this wash.

Anvil Ranch Place is named for a ranch located in or near Catalina that was owned by W.D. ”Bill” Raftery, who used to shoe Backus’ horses. Raftery was a noted horseman and War World II veteran who earned four Purple Hearts. According to Backus, he was the last instructor for the U.S. Calvary when it still used horses.

Picacho View Place is named because one can see Picacho Peak from this road, which is on higher ground.

Backus says the rest of the street names in Coyote Creek are made up names that sound like cattle brands.

In 2001, Backus purchased an old bullet-ridden windmill brought in from a Kansas farm or ranch. It now serves as a symbol for the housing development, and houses a raven’s nest.

Backus now spends most of his free time riding trails, is a past president of Los Charros del Desierto and is a member of The Centurions, which raises money for Tucson Medical Center.

Special thanks to Joseph C. Wilder, editor of the Journal of the Southwest. David Leighton is a historian and author of the book “The History of the Hughes Missile Plant in Tucson, 1947-1960.” If you have a street to suggest or a story to share, contact him at Streetsmarts@tucson.com

Special thanks to Joseph C. Wilder, editor of the Journal of the Southwest

Rancho de la Osa, a historic guest ranch on the U.S.-Mexico border southwest of Tucson, that has hosted presidents and movie stars. Part of th…

The 21 best-selling albums of all time

At 33 million certified units sold, the best-selling album of all time has achieved triple-diamond status — the only album to do so.

Peter Backus with two of his horses. The darker horse is Valentine, mother of Kali, namesake of Kali Drive.

The old bullet-ridden windmill and raven’s nest near the Coyote Creek office.