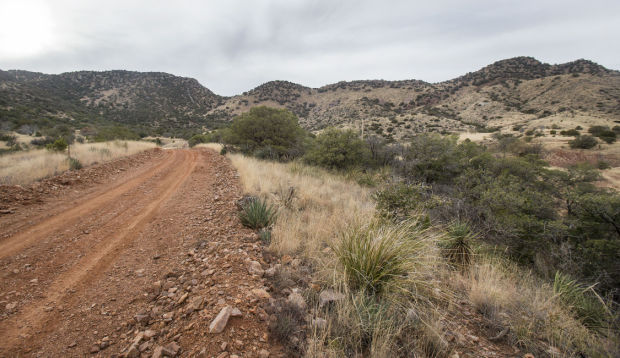 Effort to secure federal permits for the proposed mine, in this area of the Santa Rita Mountains, began in 2007. The $1.5 billion project would be the nation’s third-largest copper mine. 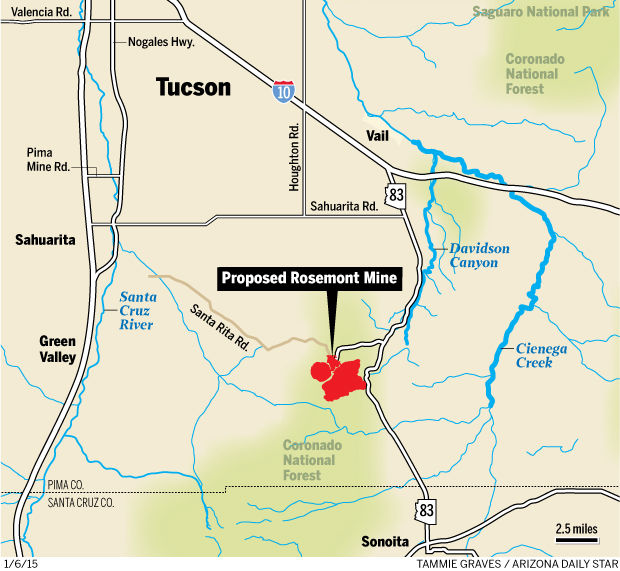 PHOENIX — Opponents of the Rosemont Mine clashed with the mining company and a state agency Monday over whether the state can deny a permit to the mine if it’s shown to have the potential to violate clean-air standards.

At a Superior Court hearing, the various parties also argued over whether the mining company properly used computer modeling to show the mine would meet the standards. Both sides accused the other of selectively choosing data to make their case.

At stake is a permit the Arizona Department of Environmental Quality issued nearly two years ago to allow the mine to operate in the Santa Rita Mountains, about 30 miles southeast of Tucson. The permit issue has bounced around for more than three years between the state and Pima County governments since the mining company applied for it.

The opposition group Save the Scenic Santa Ritas challenged the state permit, first appealing to a state administrative law judge, then to Maricopa County Superior Court after the law judge upheld ADEQ.

The modeling showed the mine would be in compliance with all federal standards, and, as Rosemont pointed out in a legal brief, ADEQ approved the permit after spending more than 500 hours reviewing the application. In its lawsuit, Save the Scenic Santa Ritas criticized data the mining company used to demonstrate compliance and the locations of sites that were used to provide background air-quality levels.

At Monday’s hearing, a Save the Scenic Santa Ritas attorney challenged the view of ADEQ and Rosemont that not only does the state agency lack authority to require the mining company to use computer models to forecast air emissions — it can’t deny the permit if modeling proved problematic for the mine.

“It’s astonishing to me that if the evidence indicates the potential that the mine would violate the national air-quality standards, ADEQ takes the position that the permit can be issued, even though the source may jeopardize public health,” said Van Wolf, attorney for the Santa Ritas group, which represents environmentalists, neighboring residents and area businesses. “It simply makes no sense.”

Wolf cited a state law that says a permit shall be denied if an applicant can’t show it is designed in such a way that it “may be expected to operate” without emitting pollutants in violation of state laws and rules.

The mining company and ADEQ, however, say the law cited by Wolf is a “general statute” that directs permit applicants to another statute that doesn’t contain such specific requirements. In addition, Rosemont takes the position that the federal air-quality standards legally can’t be used as requirements for obtaining state air permits except for much larger pollution sources than the proposed mine, said Eric Hiser, the mining company’s attorney.

“The practical consequence of Save the Scenic Santa Ritas’ request is that if there is a potential that a firm may cause exceedance, you have to reject that permit,” Hiser told the judge. “Maricopa County is in (noncompliance) for a number of the national air-quality standards, so the logical extension of that point is that nothing can be permitted there. That’s contrary to 40 years of precedent.”

Three main points of contention exist among the state, the mining company and the opponents over whether the mine’s computer data properly showed it would meet the air standards.

They’re supposed to be representative of the mine site’s topography, climate and other features, but opponents said two sites closer to Tucson — at the Children’s Park area on the northwest side and at Saguaro National Park-East — are more representative.

That’s in part because Tucson’s dirtier air will have some impact on background air-quality levels at the mine. Rosemont, however, said weather data show the winds blow the air from those sites to the mine very rarely, ruling them out as prospective sites.

Rosemont, however, said the modeling data used for the Forest Service can’t be relied on for the state permit because those data “supports a different application for a different approval before a different agency,” and used a much higher nitrogen dioxide/nitrogen emissions ratio.

Do you side with the mining company or the environmentalists on the Rosemont issue?

Effort to secure federal permits for the proposed mine, in this area of the Santa Rita Mountains, began in 2007. The $1.5 billion project would be the nation’s third-largest copper mine.