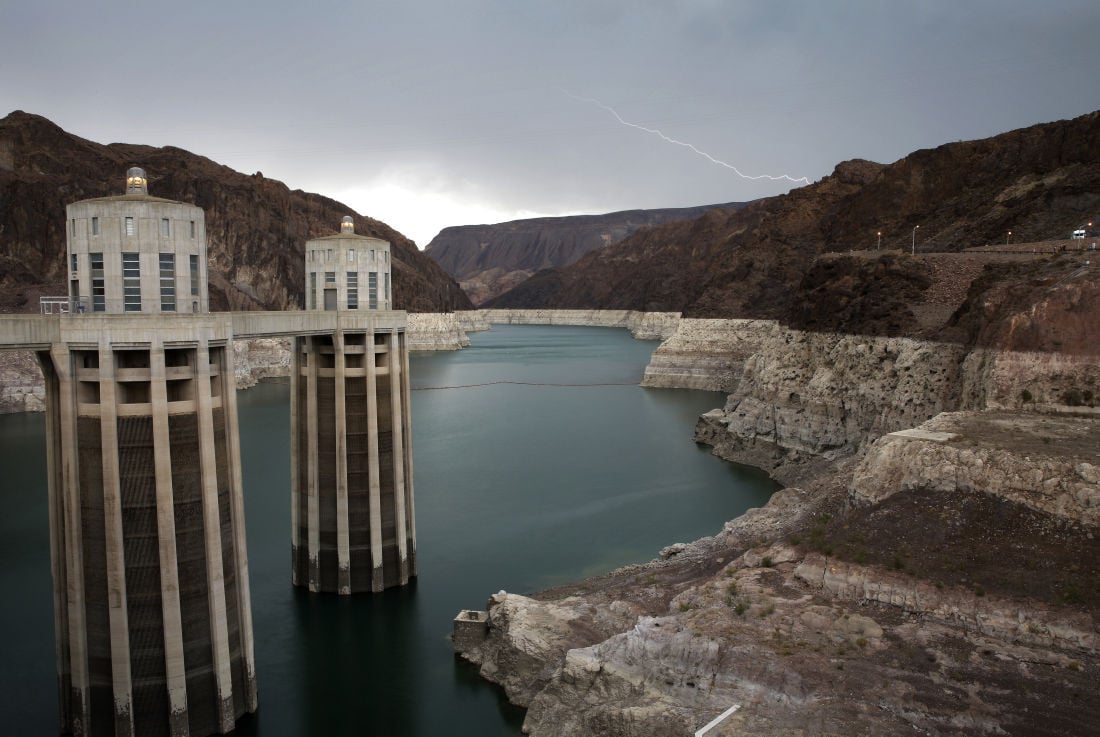 Hoover Dam, a reliable supplier of low-cost power for the Southwest, is especially useful when demand is high. 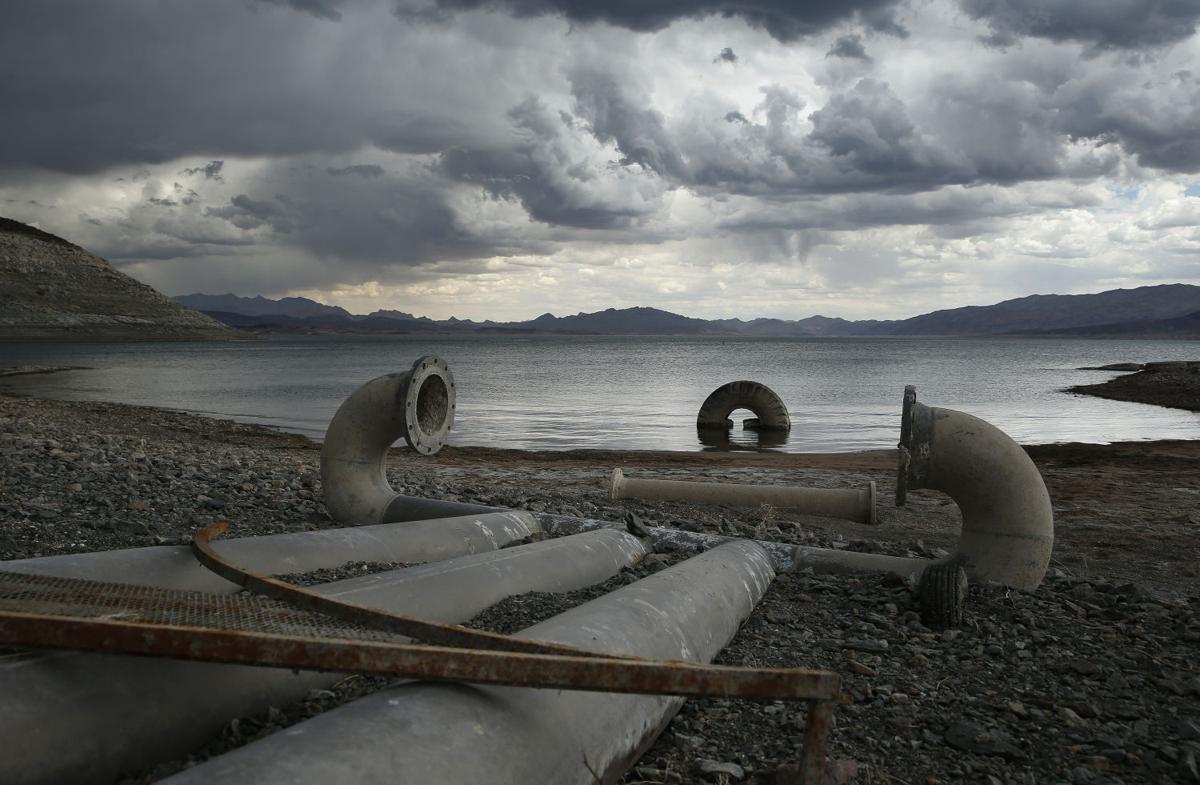 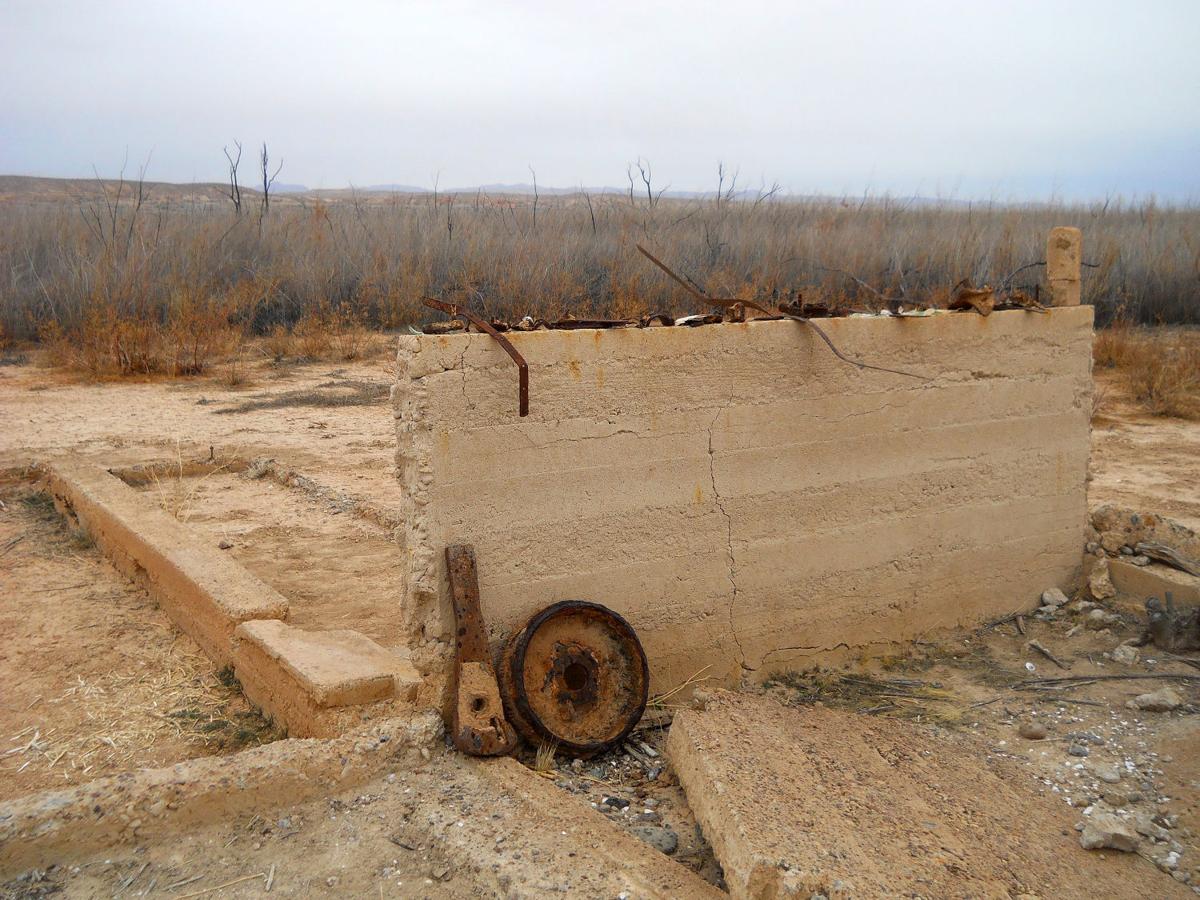 The town of St. Thomas, Nevada, was flooded during the creation of Lake Mead, the largest reservoir in the U.S. The lake has receded due to drought, revealing artifacts from the town. 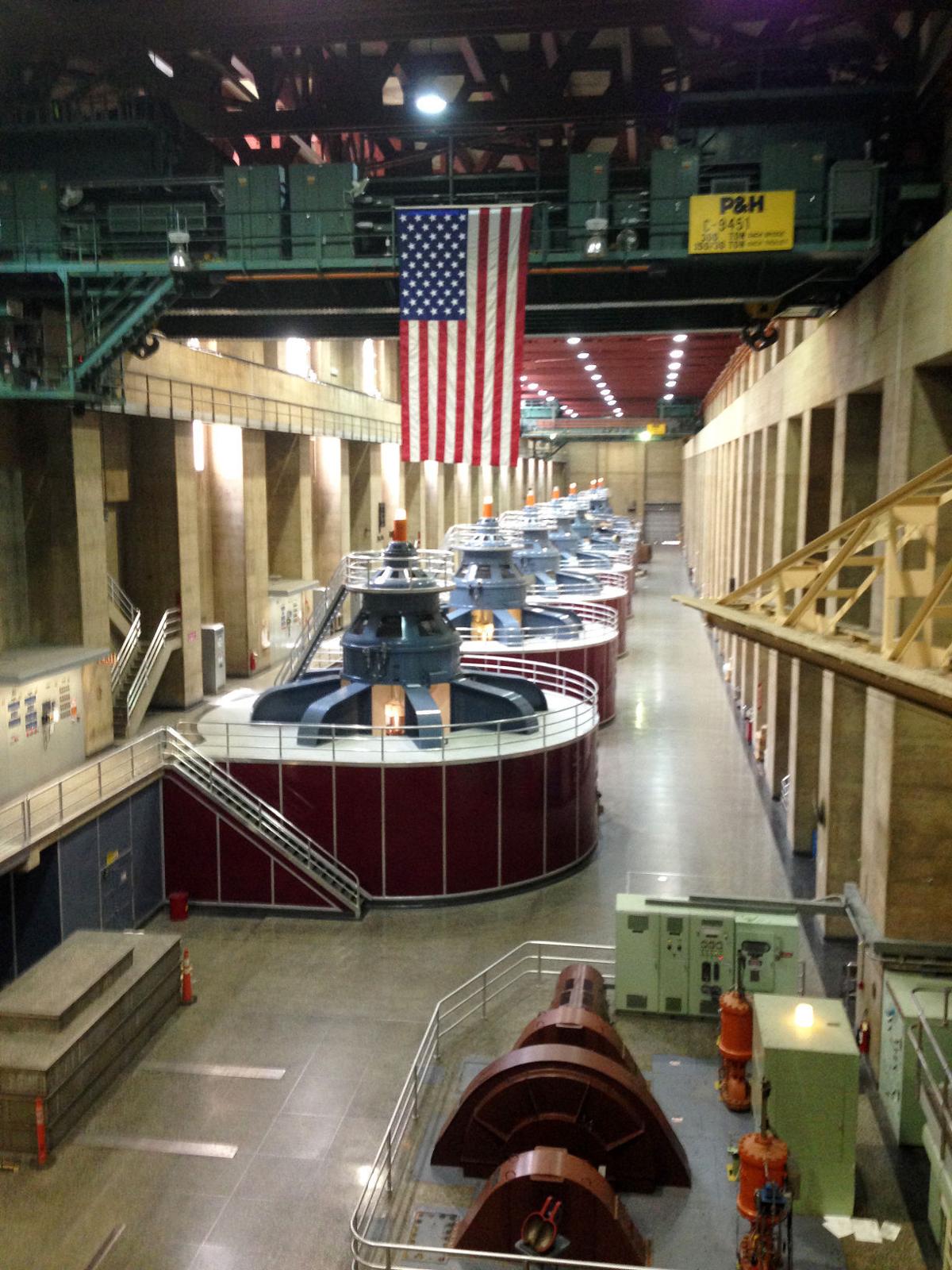 The amount of power produced by Hoover Dam generators has dropped nearly 25 percent since 2000.

A shortage of Colorado River water would affect Arizona and the Southwest more than many people previously believed, a new study says.

Called “The Bathtub Ring” after Lake Mead’s whitish coating, the study examined potential side effects of a Colorado River supply shortfall. It warns that electricity costs for Hoover Dam power customers would rise sharply, that visitation to Lake Mead could tumble and that California, not just Arizona, would suffer from an early shortage.

The fragile Colorado River Delta in Mexico could also suffer from a shortage when irrigation water that nourishes the delta is cut back, the study says.

When it was finished in mid-May, it appeared that the river’s first shortage could be declared next year and was almost certain for 2017. Thanks to heavy rains in Colorado, though, a shortage has been postponed, possibly until 2018. Still, Southwestern water officials remain concerned about the river’s health because in most years, people take more water from it than it carries. Even this year, Lake Mead is predicted to be lower at the end of 2015 than it was in January.

Reaction to the study has been mixed. Kenney said it’s hard to know if the students got all their analysis right, “but they gave it a really good, solid, incredible shot, and I don’t think anyone else had done that.”

Hoover Dam generates low-cost electric power for the Southwest, providing a reliable supply that’s particularly useful during peak hours when many utilities and other power users need extra juice. But the study warns that costs for Hoover Dam power users would rise fivefold if Lake Mead drops to 1,000 feet from about 1,078 feet today. That’s based on a computer model the students built because, they said, one didn’t exist.

The federal Western Area Power Administration, which markets Hoover power, said it hasn’t reviewed the study thoroughly enough to comment on its predictions.

But officials with the power administration as well as the Central Arizona Project, which brings Colorado River water to Central and Southern Arizona, and the Arizona Power Authority, which allocates Arizona’s share of the dam’s power to contractors, agree that power costs will rise under such circumstances. There is disagreement over how much. A cost increase would hit cities, including Tucson, as well as farms and other water users that depend on the dam’s power to pump CAP water uphill.

Hoover Dam’s hydroelectric power, first generated during the Great Depression, is highly coveted because it’s usually much cheaper than spot market power from natural gas or other sources. It’s also highly flexible, able to ramp up much more quickly than other sources to meet spikes in demand.

Arizona gets 19 percent of the dam’s electric load. CAP buys by far the most Hoover power of any of the 29 governments and private entities in the state that use it — 42 percent of the total sold. Hoover power is particularly important to CAP — even though it represents only 5 to 7 percent of its power supply — because it’s delivered at peak hours at low cost. That lets CAP sell more expensive power from the Navajo Generating Station in northeast Arizona, to get more revenue to repay the federal government for the project’s $3.6 billion construction cost.

But the amount of power produced by Hoover Dam has dropped nearly 25 percent since 2000, Bureau of Reclamation officials say. When Lake Mead drops a foot, the dam loses about 5 megawatts of capacity, enough to power 1,100 homes.

To counteract the dropping lake, reclamation officials are upgrading the plant’s generators to operate more efficiently. Three are online now and two more are to start up by next year. But study author Julia Morton and various officials agree there’s a limit on how much that can help as the lake declines, because the amount of pressure the river water puts on the generators declines as the lake declines, meaning less water to power the turbines.

CAP and other Arizona Power Authority contractors are paying 25 percent to 30 percent more for Hoover power than they did in 2002, although it’s hard to tell how much is attributable to drought, said Bob Johnson, the Phoenix-based authority’s interim executive director.

The cost of Hoover power is actually higher today than spot market power because of a flood of available, cheap natural gas. But officials doubt that will last, CAP spokesman Mitch Basefsky said.

It’s widely known that Central and Southern Arizona farmers would lose water in an early CAP shortage, but the study says Tucson, Phoenix and their suburbs are also vulnerable — even though they won’t lose CAP water until the lake drops much deeper.

That’s because early shortages will cut off water to two state programs used to store and replenish water in the aquifer for the future. The Arizona Water Banking Authority, which recharges CAP water for future use, has salted away 3 million acre-feet so far. The Central Arizona Groundwater Replenishment District puts CAP water into the ground to compensate for groundwater pumped for new suburban developments.

Loss of this water to shortages poses “a serious long-term threat to the state’s water resources,” the study says.

Arizona water chief Thomas Buschatzke and Kathleen Ferris, a longtime Arizona water official and attorney, disputed many of these conclusions, although Ferris agreed with the concerns about the groundwater replenishment district. A shortage would not last forever, said Buschatzke, Arizona Department of Water Resources Director — and after it’s over storage would start again.

“Describing a supplemental backup supply as unsustainable because it’s finite is a misunderstanding of what the program is,” he said. “We’re using our aquifers like reservoirs. You raise them in good times, draw it out in bad times.”

The water bank does not face the doomsday scenario laid out by the new study because it has already been buying and recharging less CAP water in recent years, Ferris said.

Tucson-area cities are more vulnerable to a water bank supply cutoff because the bank hasn’t met its goal for recharging water to back up this area’s CAP supplies, she said. By contrast, the bank has met its goals for Phoenix, and Phoenix-area cities have stored another 1.7 million acre-feet underground, said Ferris, a former state water director who runs the Arizona Municipal Water Users Association, which represents 10 Phoenix-area cities.

As for California, the popular belief is that it’s largely immune to a shortage because federal law gives it far greater access to river water during shortages than Arizona or Nevada gets.

But the study says that Southern California’s six-county Metropolitan Water District is vulnerable to a shortage. That’s because during a shortage, California loses its ability to take hundreds of thousands of acre feet of water out of Lake Mead that it had stored there for the future.

“I would argue we would be more at risk than anyone if Mead went below 1,075,” said Bill Hasencamp, Metropolitan’s Colorado River programs director, since the state has already cut urban water use 25 percent during the worst drought in California history.

A shortage would be declared if the level dipped below 1,075 feet at the end of the year.

Lower levels in Lake Mead could hurt its status as a tourist hotbed. It drew more than 5 million visitors last year and typically captures $260 million in annual tourist expenses that create about 3,000 jobs, the study says.

The study predicted that visitation would decline to 4.1 million if the lake dropped to 1,000 feet. At 1,050 feet, visitation would be about 4.7 million, but no access points would be usable without major investment by the National Park Service to extend boat ramps and moving marinas closer to the lake, the study said.

Lake Mead visitation has already dropped from 7.6 million in 1996 to barely 5 million in 2014, although it increased slightly in 2014, National Park Service records show.

Christie Vanover, a National Park Service spokeswoman, said it’s impossible to predict visitation based only on lake levels. Also, this year’s visitation unexpectedly spiked by 32 percent through July compared to the same period in 2014, due to better promotion, improved economic conditions and possibly lower gas prices. At its current rate, visitation will top 6 million this year.

This year, pavement at five of six launch ramps no longer reaches the water. The park has awarded contracts for $1.5 million to extend the ramps to the water, and plans to extend ramps further for the next five years.

Chris Neher, a Montana economist who co-authored an earlier study covering Mead visitation through 2011, said either Vanover or the study could be right — there’s no way to tell.

“There’s a multitude of possible factors impacting recreational use and one of them is water levels,” he said. “People like to go to lakes that have water in them.”

State is way behind the curve.

But emission cuts would only reduce the river's future problems -- not end them.

Hoover Dam, a reliable supplier of low-cost power for the Southwest, is especially useful when demand is high.

The town of St. Thomas, Nevada, was flooded during the creation of Lake Mead, the largest reservoir in the U.S. The lake has receded due to drought, revealing artifacts from the town.

The amount of power produced by Hoover Dam generators has dropped nearly 25 percent since 2000.