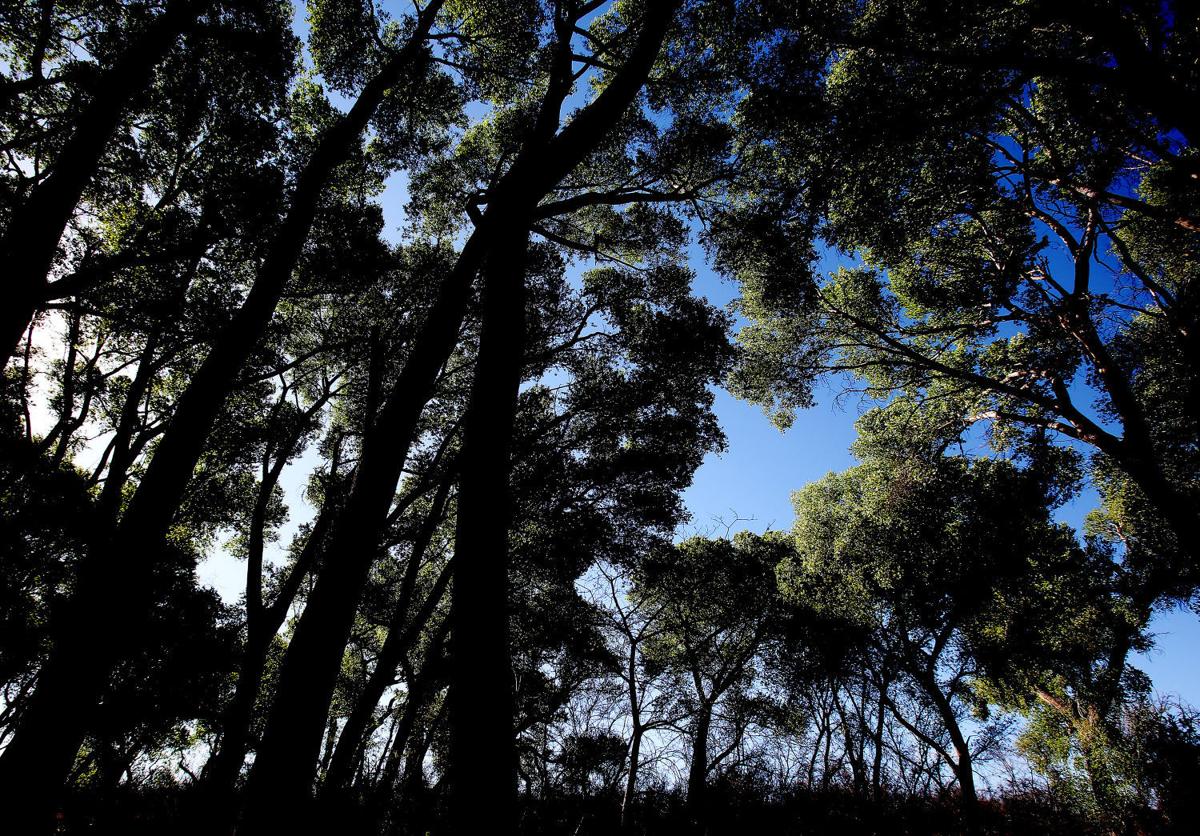 A view looking up at the canopy of cottonwoods in Empire Gulch, about 10 miles north of Sonoita. The trees have been a success story since the BLM fenced them off from cattle. 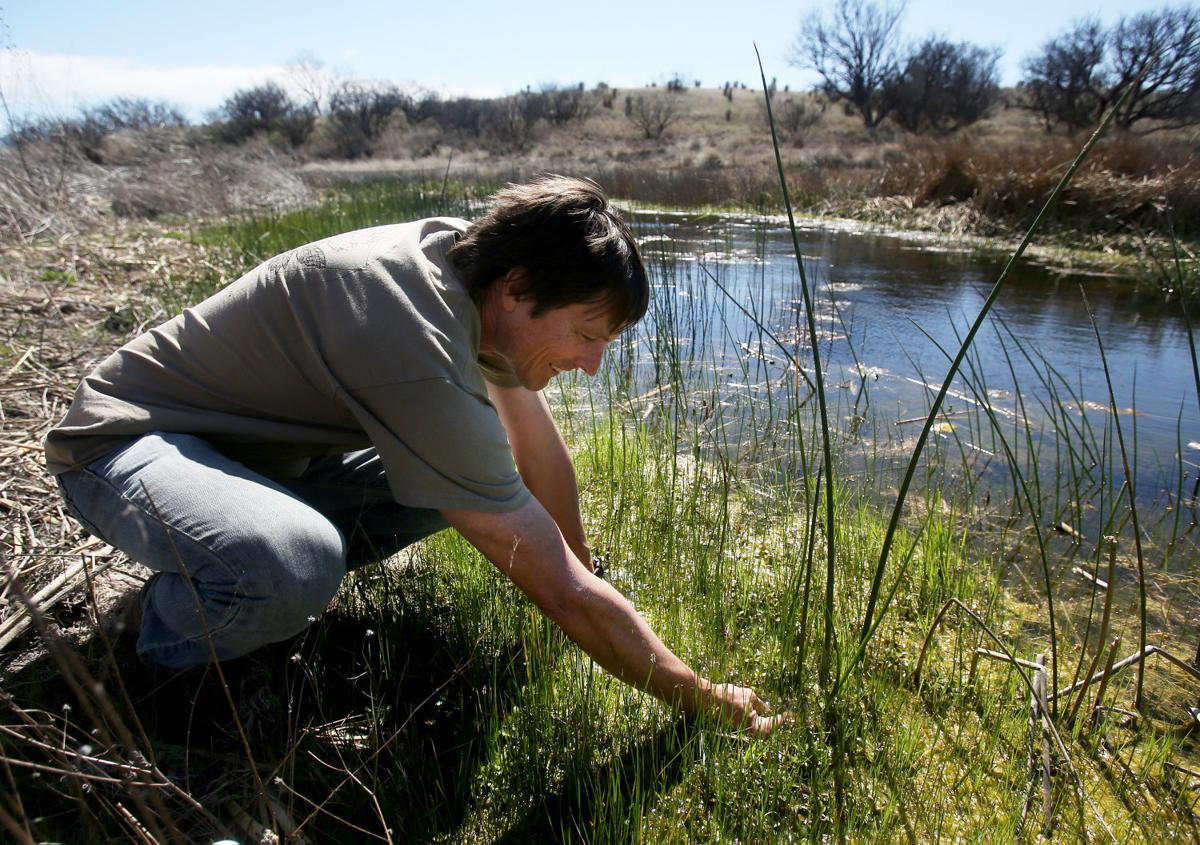 Biologist Dennis Caldwell pulls at the root of a giant rush plant in the Bureau of Land Management’s Cieneguita Wetland east of Empire Ranch near Cienega Creek in the Las Cienegas National Conservation Area. 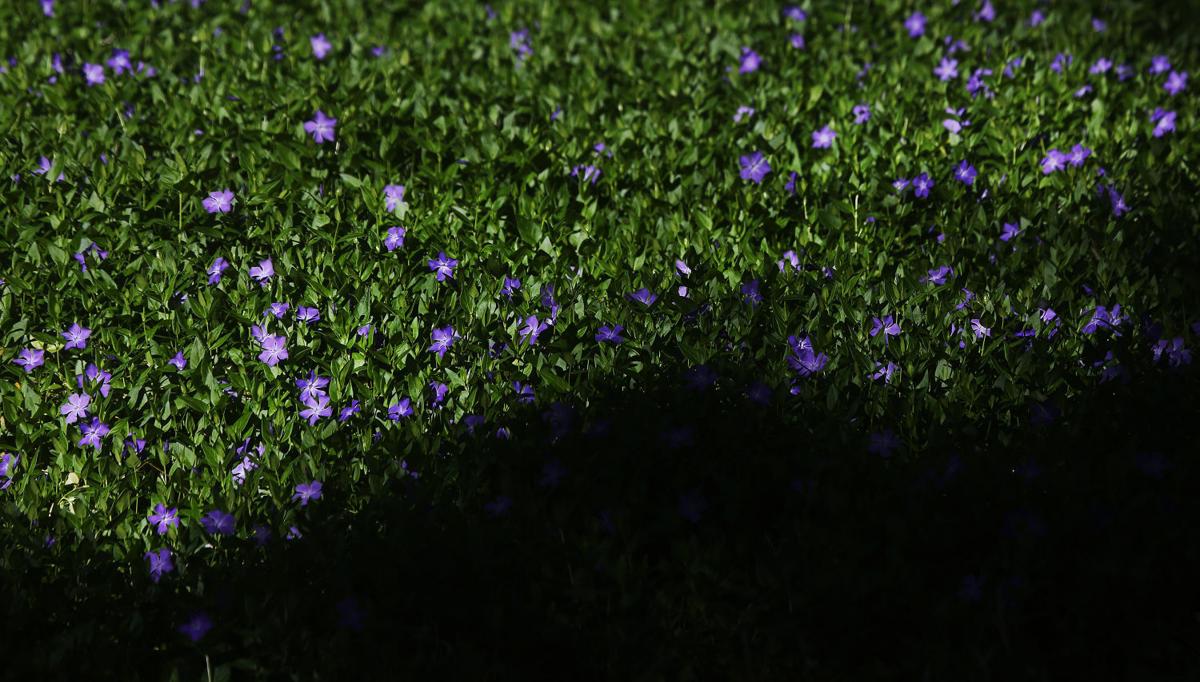 Pretty for an invasive species — a patch of vinca flowers in the Empire Gulch near Empire Ranch in the Las Cienegas National Conservation Area.

Endangered Gila topminnows swim in the Cieneguita Wetland east of Empire Ranch. The worry is that a half-mile-deep mine pit will “function as a well,” pulling in surrounding groundwater. 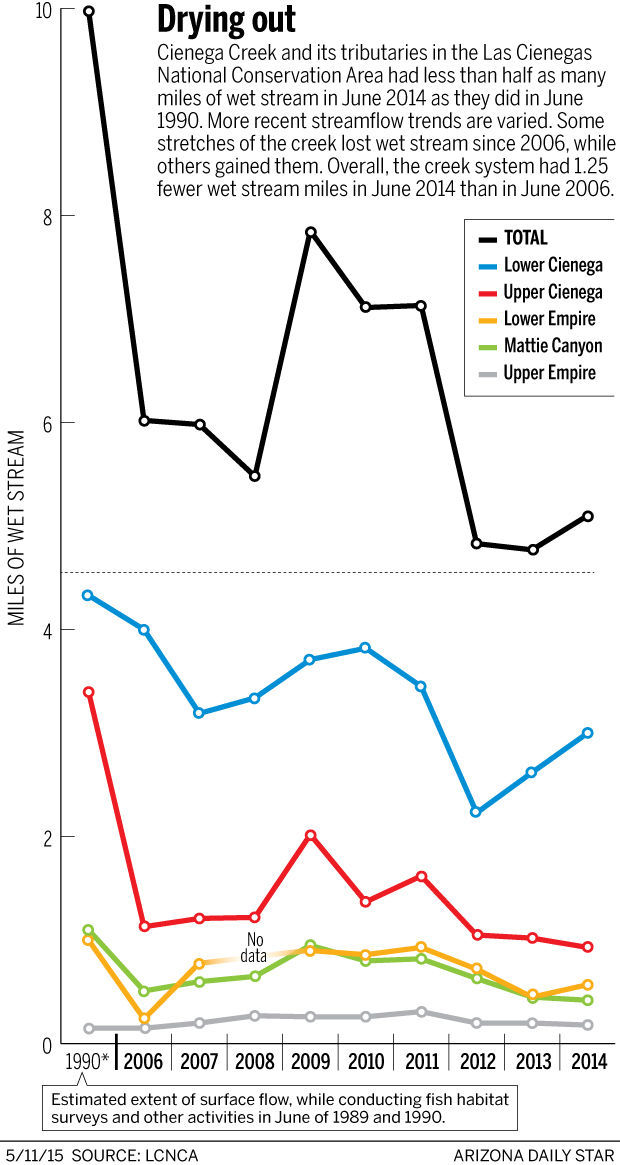 Empire Gulch and Cienega Creek are environmental success stories, though their futures are uncertain if the Rosemont Mine is built.

Cottonwood trees with wide boughs of bright green leaves tower 60 feet above Empire Gulch, about 3 miles east of Arizona Route 83 and more than 6 miles north of Sonoita. A dry stream at first, the water rises to the surface a few hundred feet east of where most visitors enter. Then, the gulch becomes a series of pools filled with watercress, duckweed reeds and other marsh plants. The gray hawk’s mournful whistle is one of the few noisy intrusions in this quiet setting, and flycatchers, warblers and sparrows dart from trees to shrubs and back again.

A few miles east, Cienega Creek is a series of deep pools connected by narrow, deep slots. Small mud turtles bubble out of the water from time to time, and tiny, endangered Gila topminnow and Gila chub can be seen occasionally.

The gulch and creek are centerpieces of the 42,000-acre Las Cienegas National Conservation Area, a federally owned grasslands site that is both a working cattle ranch and home to eight endangered and threatened species. But the proposed Rosemont Mine could change all that — the Environmental Protection Agency, the Bureau of Land Management and Pima County have said the mine could dry up the creeks.

The U.S. Forest Service and mine owner Hudbay Minerals Inc., have said they don’t expect Cienega Creek to be seriously degraded for at least 1,000 years, if ever, although the Forest Service has said Empire Gulch could suffer serious impacts.

For now, the creeks are tributes to the environmental restoration efforts of scientists and volunteers:

• A team of biologists and volunteers worked from 2010 to 2013 on a rare and successful effort to remove more than 1,500 invasive, non-native bullfrogs from Cienega Creek. That helped with the reintroduction of imperiled Chiricahua leopard frogs that were wiped out by a fungal disease the bullfrogs carried.

• The removal of cattle has also helped the leopard frog population at Empire Gulch. The gulch was mostly a “sand wash” with a thin ribbon of water running over it 30 years ago, but has since become a collection of pools. Today, Empire Spring at the gulch’s upper end supports the largest natural population of leopard frogs in the Cienega Creek basin, from the Santa Rita Mountains on the west to the Whetstone Mountains on the east, BLM biologist Jeff Simms and University of Arizona herpetologist Philip Rosen wrote in a 2014 paper.

• The BLM is reintroducing leopard frogs, endangered desert pupfish and other native fish such as the Gila topminnow into some of 27 natural wetlands and five former cattle ponds in Las Cienegas that have been fenced and converted into aquatic habitats.

The one environmental downside at the creeks in recent years is that their flows are diminishing. Today, Cienega Creek, Empire Gulch and a second tributary, Mattie Canyon, have less than half the wet stream-miles during the June dry season as they did in 1990, BLM says. That’s due partly to drought and, probably, to groundwater pumping in neighboring developed areas, Simms said.

Walking through Empire Gulch recently, Dennis Caldwell, a private biologist, pointed to cottonwoods as a prime success story. The gulch and its trees lie just north of the Empire Ranch headquarters, an 1870s complex of light adobe houses, barns, a tack room, corrals and a machine shop.

“It’s mostly the same generation of cottonwoods,” observed Caldwell, who has worked at Las Cienegas since 1999. “When this ranch was very active in the 1800s, the cattle were bunched up here. There was not much water. There were hardly any trees.

“Once BLM took it over, and the waters were fenced off from cattle, the cottonwood saplings were re-established. Those trees were fairly small when I started coming here, and now they’re much bigger.”

If the water table there were to drop a few inches, the gulch’s shallow surface flow could dry up even while the deeper pools survived, said BLM biologist Simms. But there would still be trees unless the water table dropped at least 15 feet, because that’s how deep the cottonwoods’ roots have sunk, Caldwell said.

“With no trees, nobody would remember that there was a river there,” he said. “This is what happened on the Santa Cruz River near Tucson.”

At Cienega Creek, the water pops up and dips back underground from its headwaters at the conservation area to the suburban community of Vail, where it becomes a dry stream year-round except after heavy rains. The creek has the largest population of Gila topminnow left in the world, Caldwell said.

“This valley is their stronghold,” he said. “Their former habitats in other rivers are gone.”

The native Chiricahua leopard frogs — now listed as a threatened species — were abundant in Cienega Creek and Empire Gulch through the early 2000s, Simms and Rosen wrote in their 2014 memo. But an often-fatal fungal disease drove them out of Cienega Creek.

In the late 1990s, “they were there in very low numbers. By 2008, there were no leopard frogs in the creek. Then the bullfrogs were removed, we did reintroductions, and the leopard frogs came magically back,” Caldwell said.

Teams of biologists removed the bullfrogs with spears and 10-foot-seining nets, Caldwell said. By removing the bullfrogs, they eliminated the largest source of the fungal disease, Simms and Rosen’s paper said.

In Cienega since then, “the leopard frogs have rebounded astonishingly,” Caldwell said. They were reintroduced there in 2013, she said, and by fall 2014, “they were so numerous, they couldn’t count them.”

But if the creeks ever dry up, the frogs and fish would go with them. Those agencies that say it could or will happen are worried that the removal of large amounts of groundwater to dig out the mine’s 3,000-foot-deep open pit will dry up the aquifers that feed Cienega and Empire with water.

Computer models used by the Forest Service have predicted that there’s little chance that Upper Cienega Creek will lose any streamflow 50 years after the mine closed, but that the creek could be dry anywhere from three to 351 days after the mine has been closed for 1,000 years.

As for Empire Gulch, the models found some possibilities that the stream could dry up for four to 283 days as soon as 50 years after mine closure, and that after 150 years it could be dry from 32 to 363 days per year. The BLM, EPA and the county all say the models aren’t capable of making forecasts that specific, and are worried the consequences could be much more severe much sooner than the Forest Service is predicting.

A view looking up at the canopy of cottonwoods in Empire Gulch, about 10 miles north of Sonoita. The trees have been a success story since the BLM fenced them off from cattle.

Biologist Dennis Caldwell pulls at the root of a giant rush plant in the Bureau of Land Management’s Cieneguita Wetland east of Empire Ranch near Cienega Creek in the Las Cienegas National Conservation Area.

Pretty for an invasive species — a patch of vinca flowers in the Empire Gulch near Empire Ranch in the Las Cienegas National Conservation Area.

Endangered Gila topminnows swim in the Cieneguita Wetland east of Empire Ranch. The worry is that a half-mile-deep mine pit will “function as a well,” pulling in surrounding groundwater.