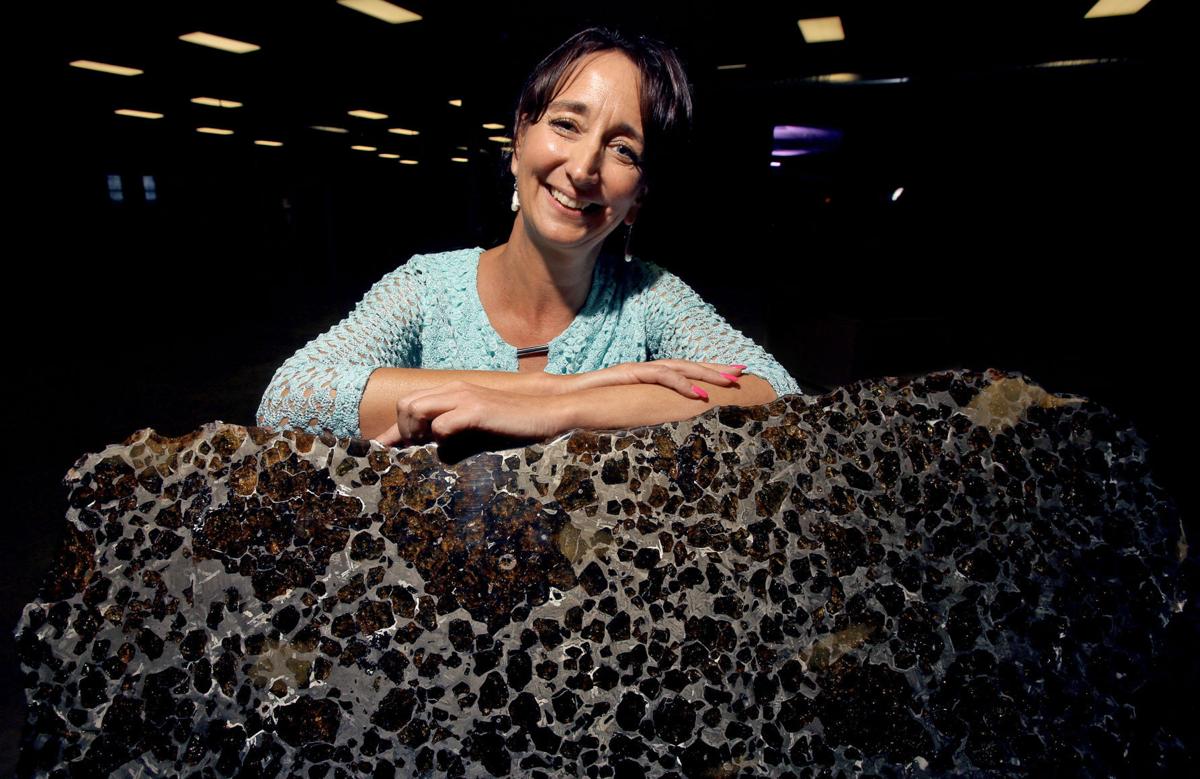 Heather Enos is the incoming deputy principal investigator for the OSIRIS-REx project at the Michael J. Drake building at 1415 N 6th Ave., in Tucson on Sept 26, 2016. She is next to the Fukang meteorite which was discovered in 2000, in China. It is a pallasite, a type of meteorite with golden crystals of olivine embedded in nickel-iron. 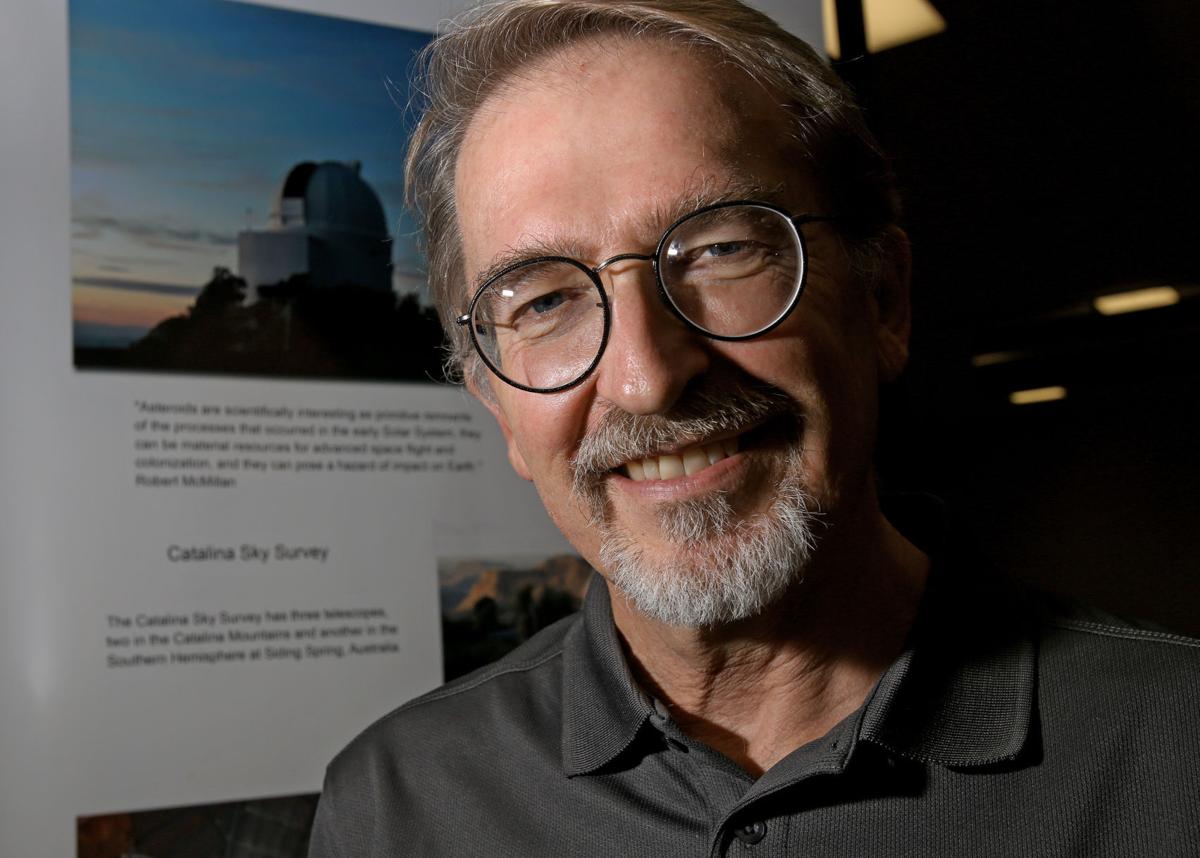 Ed Beshore, outgoing deputy principal investigator for OSIRIS-REx, once built his own observatory. He plans to return for key points of the mission in an advisory role.

The former deputy principal investigator for the OSIRIS-REx mission ended up there partly because of his dislike for greasy fingernails.

Ed Beshore retired last week from the mission, which launched last month with a plan to visit an asteroid, scoop up a sample and return it to Earth.

He grew up during the Apollo moon missions and has always loved space, but Beshore said he is really an engineer at heart.

He was a car buff as a teen, fixing them up and driving them fast. The mechanical aspects of engineering — building things and taking them apart — always appealed to him. He just couldn’t take the grease.

“I was in high school shop and I remember coming home and going, ‘I am so tired of cleaning my fingernails,’” he said. “So that’s actually what made me go, ‘I need to go back and take a look at astronomy as a career.’”

He graduated from the University of Arizona with bachelor’s degrees in astronomy and physics, but he didn’t work in the field right away. Instead, he taught himself software engineering, worked for Hewlett-Packard, then Boeing, and eventually started his own technical marketing business in Colorado.

In Colorado, he was drawn back to astronomy. His wife, Amy Phillips, said they spent an evening at a nearby private observatory but clashed with its owner.

“It was a frustrating enough experience that when we came back from that I just said, ‘You know, I don’t ever want to have to look through anybody else’s telescope again. If you want to get a telescope, go ahead and get one,’” Phillips said.

Within an hour, Beshore had ordered his own telescope.

“As most married people know, when your spouse tells you to go out and buy the metaphorical equivalent of a sports car, you don’t waste any time,” he chuckled.

Soon though, a telescope on the deck wasn’t enough. Beshore wanted an observatory.

Phillips — or, the grant committee, as Beshore calls her — once again gave her blessing, and he built an observatory in their backyard with the help of Phillips’ father, who was an architect.

It wasn’t fancy — just “a shed whose roof rolls off” — but he constructed it to keep the equipment inside at stable temperatures, and wired the telescope to a specialized camera.

Beshore’s telescope did run really well — and with none of the grease that comes with hot rods. He automated it to take data overnight. In the morning, he would analyze what had come in and send it to a professor at Columbia University who was interested in Beshore’s amateur astronomy work.

Soon, he wanted a bigger telescope.

This time, Phillips wasn’t on board.

“She told me, ‘Well, your grant committee has cut you off, and you need to find somebody else who has a bigger telescope,’” Beshore said.

He found out in 2002 that Steve Larson and the UA’s Lunar and Planetary Lab had started up a series of observatories, called the Catalina Sky Survey, and that Larson wanted to program the telescopes just as Beshore had done for the one in his backyard.

“I would have to say some of my happiest career times have been at the Catalina Sky Survey,” he said. “For the two years I was working on (programming the telescopes), I hated weekends. I just wanted to keep going.”

Beshore created the software to run four telescopes — on Mount Lemmon, Mount Bigelow and in Australia — to search for near-Earth objects, or NEOs.

The survey became the most prolific discoverer of the objects.

“Telescopes kind of do a dance,” Beshore said. “You’re moving the telescope to the next object, you’re setting the camera up for that observation, then you have to focus the camera, take the image, and then while the images are downloading you move the telescope to the next object … it was a kind of sophisticated software engineering job and very, very fun.”

Beshore’s software engineering abilities have made him invaluable to the OSIRIS-REx team, said Dante Lauretta, the mission’s principal investigator.

On traditional NASA missions, the science team is more separate from operations, but for OSIRIS-REx, scientists play a crucial, time-sensitive role.

They will use the craft’s array of instruments to guide the spacecraft around the asteroid and select the best spot to go in and collect a sample.

For the past four years, Beshore has been organizing the science team for this role, as well as building the system they will use to share data and efficiently select a sample site.

Now that the spacecraft is on its way to asteroid Bennu, Beshore thought it was the right time to go.

“Ed really has been great to work with, he’s really been a great friend,” Lauretta said. He “calms me down and pushes me forward. I’ll miss that, that’s a really nice relationship to have with your deputy.”

Dani DellaGiustina, the lead image-processing scientist, said Beshore was an almost parental presence on the team. He always went out of his way to make sure everyone was being taken care of — and sometimes to see what they were listening to.

“Ed is the kind of guy who comes in when you have your headphones in and asks what sort of music you’re listening to and then sends you an email later on with MP3s of comparable bands he likes,” DellaGiustina laughed. “Who does that, right?”

Though his team members are sad to see him go, they know he’s earned it. Phillips said Beshore has worked 60-hour weeks for most of their marriage.

He doesn’t exactly plan on slowing down.

“I think I’ll still be pressed for time,” he said. “I will be getting my observatory in Colorado put back together, take it out of the mothballs. … I also will probably be going up to an observatory on Mount Lemmon and working up there a little bit as well. I think I’m going to be challenged to get done all the things I want to do, and that’s great.”

The day he retired, Beshore went to Sabino Canyon Recreation Area to buy his senior federal lands pass, which is good for the rest of his life.

Phillips said she supports his plan to work on environmental issues and that they’ve always wanted to do volunteer trail maintenance.

She won’t be joining him on all of his adventures; she isn’t planning on retiring from her position as a senior licensing manager in the UA College of Optical Sciences for another couple of years.

She said it’s his turn to follow his passion after a five-year period when she took trips while he was swamped with work.

Beshore said he’s planning on making time for OSIRIS-REx. He intends to return for key points of the mission with the rest of his team — but he won’t be getting his hands dirty if problems arise.

“Certainly if someone asks me a question I’ll answer it,” he said. “But I’m going to be more like a grandparent. If the baby’s diaper is dirty, I will probably hand it back and say, ‘Here, this is yours.’”

Heather Enos cracked the field without the traditional degrees.

Something new will be brewing in Arizona next summer.

Heather Enos is the incoming deputy principal investigator for the OSIRIS-REx project at the Michael J. Drake building at 1415 N 6th Ave., in Tucson on Sept 26, 2016. She is next to the Fukang meteorite which was discovered in 2000, in China. It is a pallasite, a type of meteorite with golden crystals of olivine embedded in nickel-iron.

Ed Beshore, outgoing deputy principal investigator for OSIRIS-REx, once built his own observatory. He plans to return for key points of the mission in an advisory role.