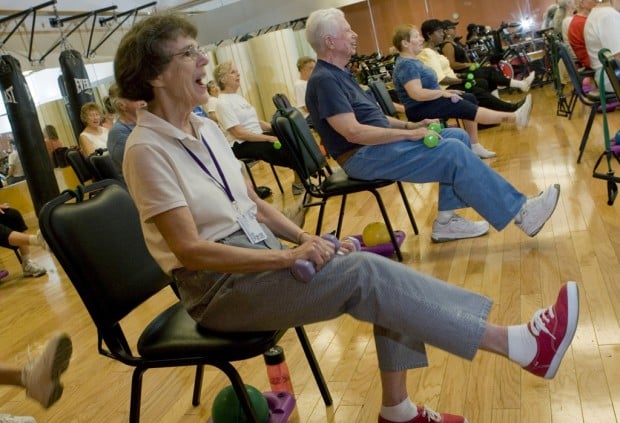 Bernie and Jack Lynch work on their warm-ups with the rest of their class at Pro Fitness, where they do Silver Sneakers classes for seniors. Bernie was diagnosed with Alzheimer's disease in December, after about a year of doing uncharacteristic things. 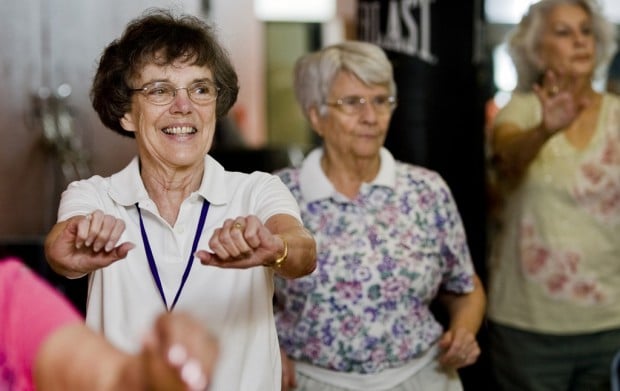 Learning she has Alzheimer's "was a hard pill to swallow," says Bernie, but she has been open about it with family and friends. 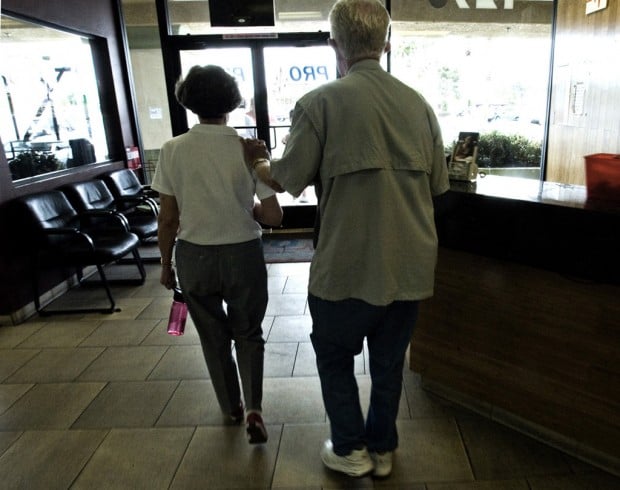 "For the first time in my life I can stay in the moment," says Bernie Lynch, who was part of the inaugural New to Memory Loss group, which first met earlier this year. Here, she leaves Pro Fitness with husband, Jack, after their hour-long workout.

Bernie and Jack Lynch have been married for 12 years, together nearly twice that long, and are now preparing for the biggest test of their relationship: Alzheimer's disease.

The diagnosis came in December, after about a year of symptoms when Bernie began doing uncharacteristic things, like repeatedly telling the same story.

"It was a hard pill to swallow," said Bernie, 78, a retired counselor who moved to Tucson from North Dakota in 1989. She once worked at Sierra Tucson and also operated her own local counseling practice.

"As bad as it is, it's so much better to know what you are dealing with," said Jack, 76, a retired entrepreneur who moved to Tucson from Boston 30 years ago.

As the extroverted couple worked through their grief over the diagnosis, they also took action.

Bernie was still quite high-functioning and didn't have much in common with people in more progressed stages of Alzheimer's. So she was heartened to find a free local group called New to Memory Loss. The six-week group offers camaraderie and medical knowledge and gives Bernie a chance to plan for the future.

Group sponsors from Tucson Medical Center and the local Pacifica Senior Living hope to offer New to Memory Loss on an ongoing basis to provide a patients new to the disease a place where they can learn how to accept the diagnosis.

Scientists still do not know what causes Alzheimer's. They do know it involves parts of the brain that control thought, memory and language, and that it can have a severe effect on a person's ability to carry out daily activities.

Bernie was part of the inaugural group, which met earlier this year. The next session begins in June.

"It's really for people who just got a diagnosis and only for individuals who can be in the group by themselves," said Terri Waldman, executive director of Pacifica Senior Living, which is an assisted living facility for people with memory disorders.

Waldman, who leads the New to Memory Loss group, meets with prospective members before allowing them into the group, to make sure it's the right fit.

"The people in the group are trying to make plans, and they are able to be in the group by themselves," Waldman said. "We talk about things like, 'What do you want people to say when you are insisting on holding onto the car keys and they don't think you can't drive?' It's more about education and making decisions so that you can get what you want."

Not everyone in the last session was suffering from Alzheimer's. Thirty-three-year-old Amy Butler, the youngest member of the group, had four surgeries to remove a malignant brain tumor when she was a teenager. She recently had a fifth brain surgery to remove a benign tumor. After that, her memory loss worsened, and she was forced to quit a job she'd held at Target for the past nine years.

More than anything, the New to Memory Loss group gave Butler much-needed social support. She is now friends with Jack and Bernie Lynch.

"I can relate to what they are dealing with," said Butler, who lives with her father. "When I woke up from surgery, I didn't know who my dad was. They asked me what year it was and I said 1994."

On the back of Butler's front door is a sign that asks three questions: 'Do you have your phone?'; 'Do you need an umbrella?'; and 'Do you have a bus schedule?'

"You go out in the world, and no one is going to understand why you forget everything," Butler said. "It's nice to be around people who have the same issues as me."

The idea for the group came from L'Don Sawyer, who is TMC's director of senior services. She was prompted by an experience she had about five years ago - an episode that still haunts her.

Sawyer was leading a group of people with advanced Alzheimer's when a man who looked to be in his 50s wearing professional clothes came in, looking at his BlackBerry as he sat down.

"My first thought was that he's in the wrong place," Sawyer said. "Turns out he'd just had his diagnosis. He was the primary caregiver for his wife, who was disabled, and he'd recently lost his job, due to his symptoms. He'd had a very good pharmaceutical job. He had this problem and yet he had responsibilities, someone else to take care of."

Though his diagnosis was causing him struggles, the man was clearly in a different category from the more advanced Alzheimer's patients in the group.

"He continued to stay on my mind as I talked to other people. He needed to be in a safe place, a class with a start and and end so you can re-evaluate, and then get referred out to other community resources," Sawyer said. "At that point, we didn't have this New to Memory Loss group. For someone to walk in who is just starting to have memory loss, to be in a group with people who are at an advanced stage, that is very frightening."

There is a little window, when patients know something is wrong and they can make a plan for the future, Waldman said.

Bernie Lynch isn't driving anymore, but she's functioning pretty well. She has a clear memory of meeting Jack in a divorce recovery group, of marrying him at St. Pius X Catholic Church on the east side and of honeymooning in Hawaii nearly a year after their wedding. They have 10 children and 17 grandchildren between them.

The couple have been open with their families about Bernie's diagnosis, and Bernie has also been open with neighbors and friends, explaining there may be a time when she wanders and isn't sure of her location. She's asked them to gently guide her home.

Jack is in a caregiver support group and knows that Alzheimer's patients often reach a point when they don't recognize their spouse. Bernie goes with Jack to those meetings and finds some of the stories scary, but she says it's better to know.

"I know I am doing the walk with others, so it doesn't feel so lonely," Bernie said.

The couple are even able to joke and lightheartedly refer to visits from "Al."

"I call 'Al' my uninvited guest who has taken up residence with us," Bernie said.

The couple spend a lot of time socializing, going to the gym, and say they have fun doing just about anything together, even if it's just grocery shopping.

Bernie, ever the optimist, has managed to uncover a gift in her diagnosis, too.

"For the first time in my life, I'm able to stay in the moment," she said. "I can sink into today and just wallow in it."

As part of Brain Week, a talk titled "New to Memory Loss and Alzheimer's Disease" is scheduled for 11 a.m. Friday. For a full list of Brain Week activities, go to tmcaz.com and look under "community calendar." More information about the New to Memory Loss group is available by calling TMC Senior Services at 324-1960 or Pacifica Senior Living at 320-7505.

U.S. Secretary of Health and Human Services Kathleen Sebelius on Tuesday is expected to release a national plan to address Alzheimer's disease in a speech to attendees of the Alzheimer's Disease Research Summit 2012: Path to Treatment and Prevention. The plan was called for in the National Alzheimer's Project Act, which President Obama signed into law in January 2011.

"I know I am doing the walk with others, so it doesn't feel so lonely."

diagnosed with Alzheimer's in December

Bernie and Jack Lynch work on their warm-ups with the rest of their class at Pro Fitness, where they do Silver Sneakers classes for seniors. Bernie was diagnosed with Alzheimer's disease in December, after about a year of doing uncharacteristic things.

Learning she has Alzheimer's "was a hard pill to swallow," says Bernie, but she has been open about it with family and friends.

"For the first time in my life I can stay in the moment," says Bernie Lynch, who was part of the inaugural New to Memory Loss group, which first met earlier this year. Here, she leaves Pro Fitness with husband, Jack, after their hour-long workout.