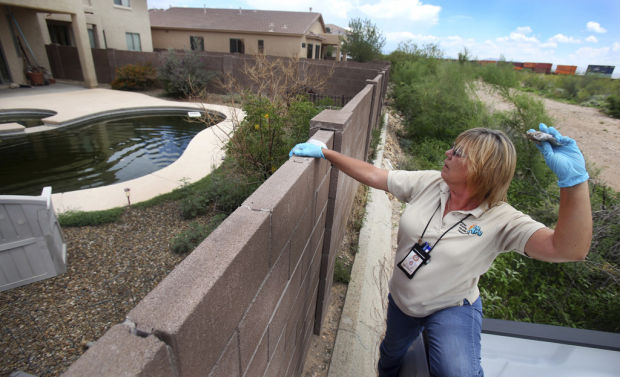 Cindy Bennett, a sanitarian assistant with the Pima County Health Department, tosses dissolvable packets of a larvicide over a wall into an unattended "green pool," a potential breeding area for mosquitoes. The home was vacant at the time. 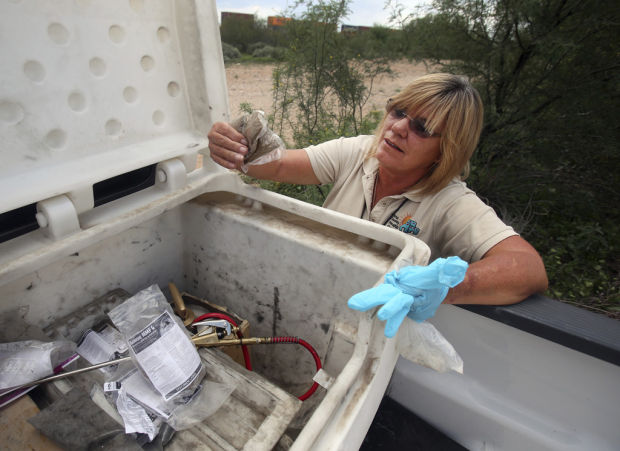 County sanitarian assistant Bennett readies dissolvable packets of a larvicide, which she'll lob into an unmaintained swimming pool at a vacant home. 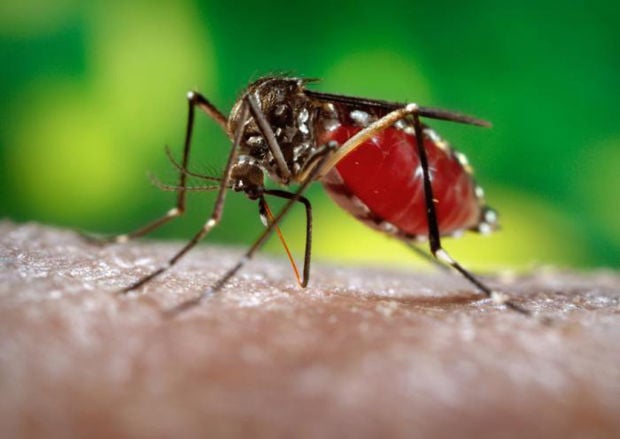 Arizona is in the midst of its monsoon, but it's also in the beginning of the West Nile virus season as well, which for Pima County usually runs from late July to October.

The U.S. Centers for Disease Control and Prevention reported three deaths as of July 23: one in California, one in Nevada and one in Mississippi. West Nile virus is spread through mosquito-to-human contact.

Michael Acoba, epidemiology program manager for the Pima County Health Department, said much of the season is dependent on the migration of birds. If the birds carrying West Nile are bitten by the mosquitoes, the mosquitoes then transmit the virus to other animals or humans.

It's difficult to predict what kind of season Arizona might see, as there are no trends and it varies by county, said Jeff Terrell, program manager for the Pima County Health Department.

"We (Pima County) don't have it as bad, but there is more water to the north," he said.

Acoba said people who have underlying health conditions or are age 50 or older are more susceptible to the virus. Acoba said one of the reasons for Maricopa County's greater outbreak might be due to the city's lush vegetation.

If residents are concerned about a possible mosquito breeding site, they can call the county Health Department's West Nile Virus Hotline to request water treatment.

There is no vaccine for West Nile, but certain precautions can be taken, such as using mosquito repellent and wearing long-sleeved shirts and long pants when outside, Terrell said. He also recommended removing standing water around the home if possible, but if not, to change it frequently.

"If you have lots of standing water, the greater the chance you have" of contracting West Nile, Terrell said.

Last year, the United States had the highest reported number of deaths since the emergence of the disease in 1999. The CDC reported 286 deaths, with the most in Texas with 89 and seven in Arizona.

The highest number of reported deaths in Arizona was in 2004 with 16.

Researchers from the University of Arizona have been awarded $2.3 million by the National Institutes of Health to track mosquitoes carrying dengue fever, a tropical and subtropical virus. The virus is endemic in Mexico, and there are reported cases around the Texas-Mexico border, according to the CDC and HealthMap.

Though dengue has not reached Arizona, the research group will be looking into whether a changing climate could affect the spread of the virus in the coming years.

Michael Acoba, epidemiology program manager for the Pima County Health Department, said there are two types of dengue: The first is dengue fever, created by four or five different strains of the virus. The second is dengue hemorrhagic fever, though this is not prevalent in the United States. People are urged to take the same precautions as with West Nile by covering as much skin as possible, using repellent and removing standing water.

• Check for items outside the home that collect rain or sprinkler water, such as cans, bottles, jars, buckets, old tires, drums, wheelbarrows and other containers.

• Use insect repellent when going out. Use mosquito repellents that contain DEET, picaridin, or oil of lemon eucalyptus.

• Wear clothing that covers your arms and legs.

• Check the screening on your windows and doors.

Lynley Price is a University of Arizona student who is an apprentice at the Star. Contact her at 573-4117 or at starapprentice@azstarnet.com Source: Pima County Health Department

Cindy Bennett, a sanitarian assistant with the Pima County Health Department, tosses dissolvable packets of a larvicide over a wall into an unattended "green pool," a potential breeding area for mosquitoes. The home was vacant at the time.

County sanitarian assistant Bennett readies dissolvable packets of a larvicide, which she'll lob into an unmaintained swimming pool at a vacant home.