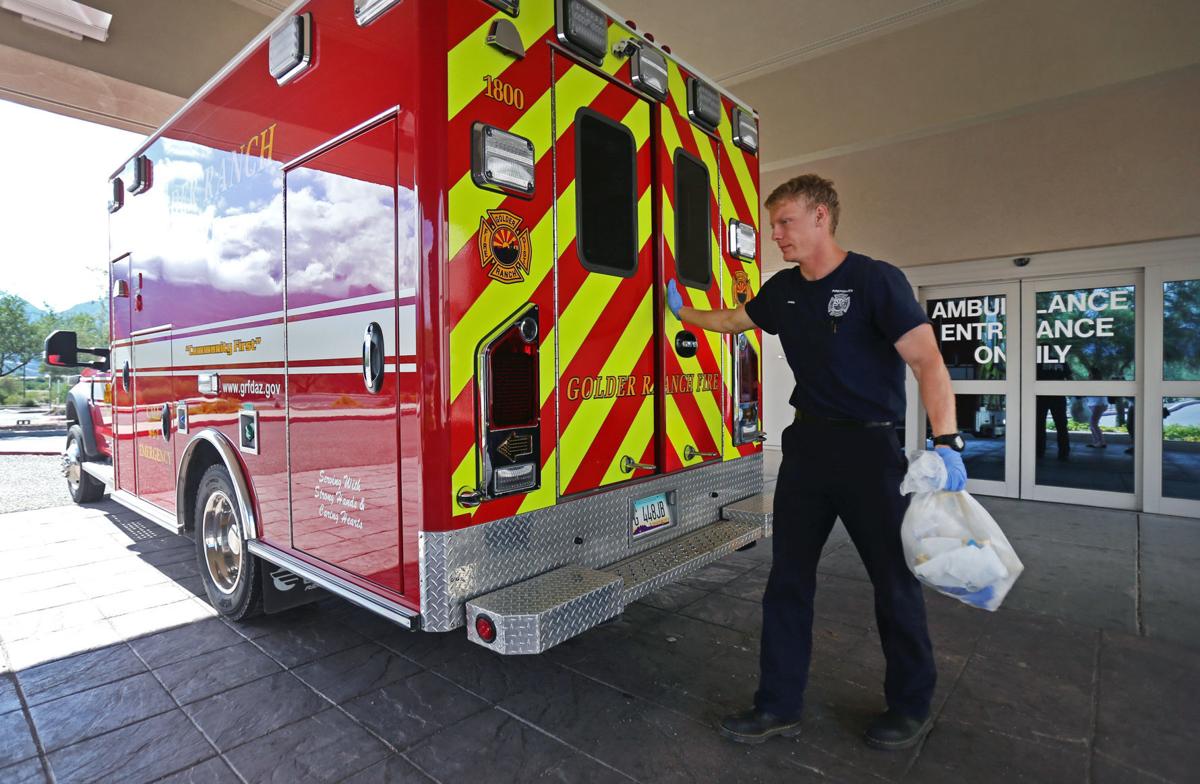 A study says Arizona EMTs have a 39 percent higher suicide risk than the general state population. “I was shocked at how high it was, (but) I had a feeling that it would be higher than the general population,” says Neil Vigil, one of the study’s authors. 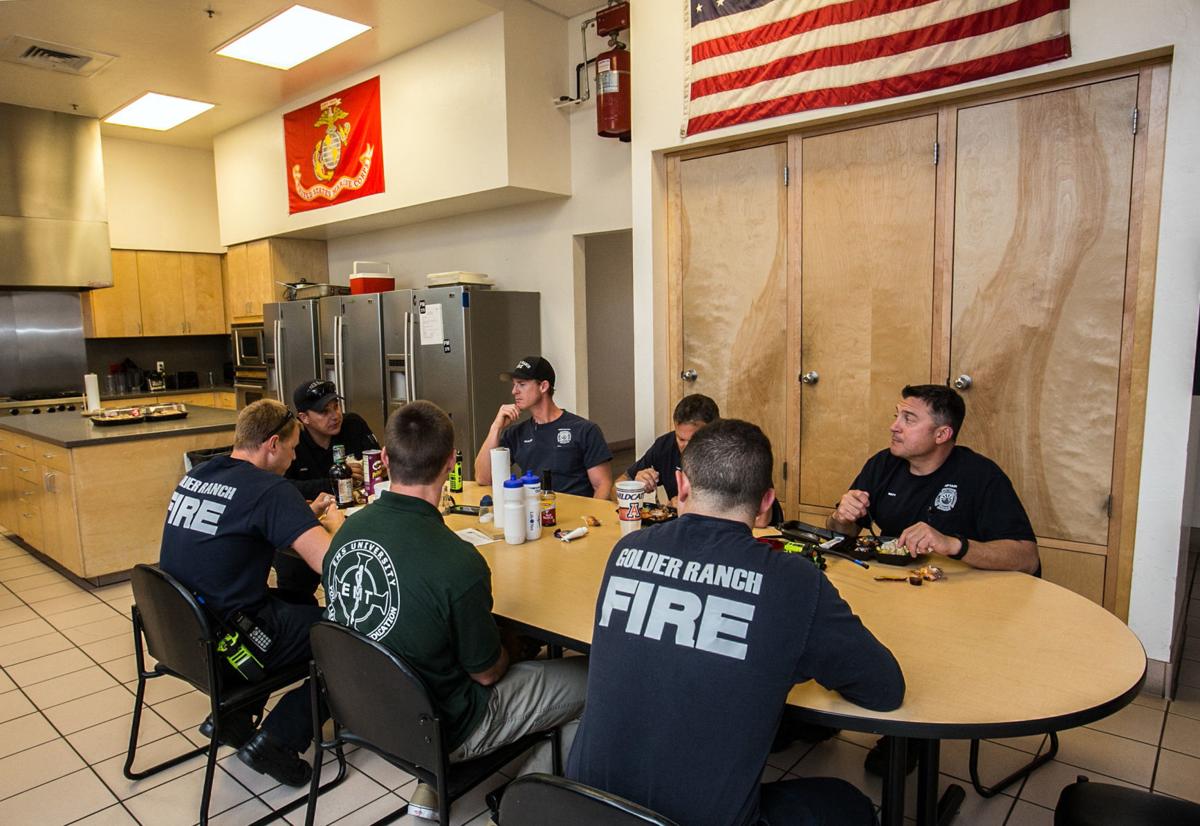 The Golder Ranch Fire District is looking at implementing a mindfulness and resiliency program as a way to help reduce the suicide rate among EMTs and firefighters.

Arizona has the 17th-highest suicide rate in the country, but emergency medical technicians in the state have an even higher risk than the general population, new research shows.

Arizona EMTs have a 39 percent higher suicide risk than the general state population, according to a study authored by Neil Vigil, a second-year medical student at the University of Arizona College of Medicine in Phoenix and Dr. Bentley Bobrow, Arizona Emergency Medicine Research Center associate director.

“I was shocked at how high it was, (but) I had a feeling that it would be higher than the general population because as I’ve been working with firefighters in the community and talking to EMTs. Everyone knows someone that they worked with that committed suicide,” Vigil said.

Part of the reason may be that exposure to suicide on a call as a firefighter is associated with an increased risk of suicidal ideation and attempts themselves, previous studies have shown, Vigil said.

“A prior study found that if you have gone out at least one call to a suicide, you were twice as likely to attempt suicide yourself, and then another study found that it was kind of a cumulative effect,” Vigil said. “So if you, over your career, went on 12 calls that had a suicide or an attempted suicide, your lifetime suicide ideation was 61 percent, whereas if you were less than 12 calls it was 31 percent.”

A recent study from the ASU Center for Violence Prevention and Community Safety using 2016 data found that men were more than three times as likely to die by suicide than women, and men ages 75 years or older had the highest suicide rate.

While Arizona EMTs are more likely to be male than female, their study controlled for gender, age, race and ethnicity, so that statistic didn’t skew the end result, Bobrow said.

“One of our major goals is to help people understand that suicide is a major public health problem,” Bobrow said. “If you’re less than 35 years of age, it’s the second leading cause of death behind only trauma, like car crashes.”

Their research is the first peer-reviewed study looking specifically at EMT suicide risk, and Vigil said there were several obstacles to overcome. The largest challenge was that there is no central, long-term database to track EMTs.

“Generally the way it works is when you get EMT certification, your name goes into a registry while current, but as soon as your EMT certification (expires), you’re dropped from the rolls,” Vigil said. “There’s no long-term record. That’s what makes this population pretty tough to follow.”

To work around that issue, Vigil used the Arizona Vital Statistics Information Management System database, which tracks all deaths in Arizona. Looking at seven years of death records, from Jan. 1, 2009, to Dec. 31, 2015, Vigil and his team sorted all the records by two factors: occupation (non-EMTs versus EMTs) and cause of death (suicide versus nonsuicide).

Vigil said they manually reviewed over 30,000 unique occupations across more than 350,000 death records.

Vigil said he hopes his research highlights not just the problem of suicide, but also the need for better record keeping.

“It’s not that people don’t like firefighters, it’s not a disinterest in helping this population either. … It’s just a hard population to study,” Vigil said.

A national database would allow researchers to see different risk factors or protective factors that might not be possible to see with a smaller data set, Vigil said.

“We can’t solve a problem without knowing what the problem is, so that was the first project. The next projects are looking at what can we do to reduce risk factors associated with suicide,” Vigil said.

Vigil and Bobrow worked with the Arizona Department of Health to create a resiliency website for EMTs and firefighters. It’s a “one-stop shop” of resources, with links to test for depression or alcohol use and information about private and nonprofit organizations that help EMTs.

The link was emailed to every registered EMT in Arizona, as Bobrow said they felt compelled to help address the problem their research highlighted.

“These are the people that dedicate their careers and lives to really being the fiber of our emergency medical system,” Bobrow said.

Vigil is also in the initial stage of a partnership with Golder Ranch Fire District, which is looking at implementing a mindfulness and resiliency program. Vigil is interested in measuring the results of that program to see the effectiveness of the methods.

“The research has been great, but I’m also excited about actually doing things about it,” Vigil said.

Golder Ranch Fire District Division Chief Scott Robb said he was looking forward to working with Vigil to quantify some best practice tools for his firefighters.

“We’ve done such a great job to protect our people from fire exposure, to train on our techniques, to try to make our jobs safer, because it’s a very dangerous job,” Robb said. “Now it’s time to take on that other side. … We need to build up that resilience and those mental health programs.”

Robb said with all the different techniques there are for mindfulness, he’s looking to narrow the selection down to a few basic tools firefighters can then personalize to help combat their increased suicide risk.

“It’s disheartening to get those stats, but it’s an exciting time because there’s hope, and we can do something about it,” Robb said.

Marissa Heffernan is a NASA Space Grant intern at the Star. Contact her at mheffernan@tucson.com.

If you are experiencing a mental health crisis, call the National Suicide Prevention Lifeline at 1-800-273-TALK (8255) for free, 24/7 crisis support.

Environmentalism is at the core of Meck Slagle's interest in this topic.

For some, moving away from plastic straws is just the beginning.

In Arizona, the sun is hard to ignore, especially in the summer — but how much do you really know about it?

A program run by University of Arizona students that turns food scraps into compost is expanding its efforts into Santa Cruz County, using a $…

If you’re in need of a passport but haven’t had time in the busy work week to get one, now’s your chance.

The funds will help strengthen partnerships with schools and community organizations to reduce tobacco use, promote physical activity and increase access to healthy foods for at-risk groups.

If you know a survivor the greatest assistance you can extend to them is to simply listen.

Well, Tucson. The rain has stopped.

DES MOINES, Iowa — The Mega Millions jackpot is now up to $900 million.

Former presidential candidate Bernie Sanders is coming back to Tucson next week to campaign for Democrat David Garcia.

Two weeks after officials were worried a dam on the Tohono O’odham Nation would overflow, the evacuation notice for area residents has been lifted.

University of Arizona volcanologist among 10 'scientists to watch'

Chris Hamilton, of the University of Arizona's  Lunar and Planetary Laboratory, he has been recognized with several early-career awards.

UA team aiming for Jupiter moon, with a stop in Greenland first

The University of Arizona's Lunar & Planetary Laboratory is working to put an instrument on NASA's upcoming Europa lander mission.

Kindergarteners through fifth-graders are helping Biosphere 2 scientists with an agrivoltaics project.

A study says Arizona EMTs have a 39 percent higher suicide risk than the general state population. “I was shocked at how high it was, (but) I had a feeling that it would be higher than the general population,” says Neil Vigil, one of the study’s authors.

The Golder Ranch Fire District is looking at implementing a mindfulness and resiliency program as a way to help reduce the suicide rate among EMTs and firefighters.