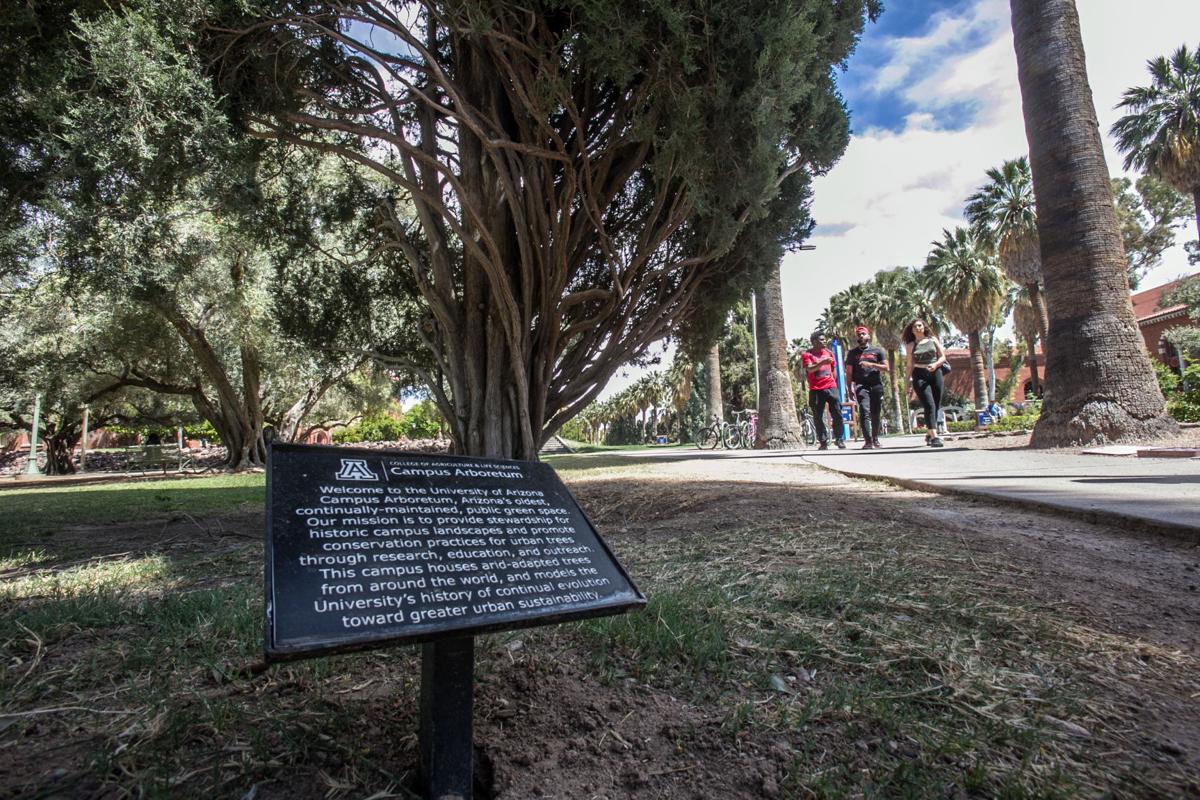 The University of Arizona Arboretum is the campus itself. There are more than 400 different tree species from around the world, and a comparable number of shrubs. Barcodes now allow visitors to learn more about the plants. 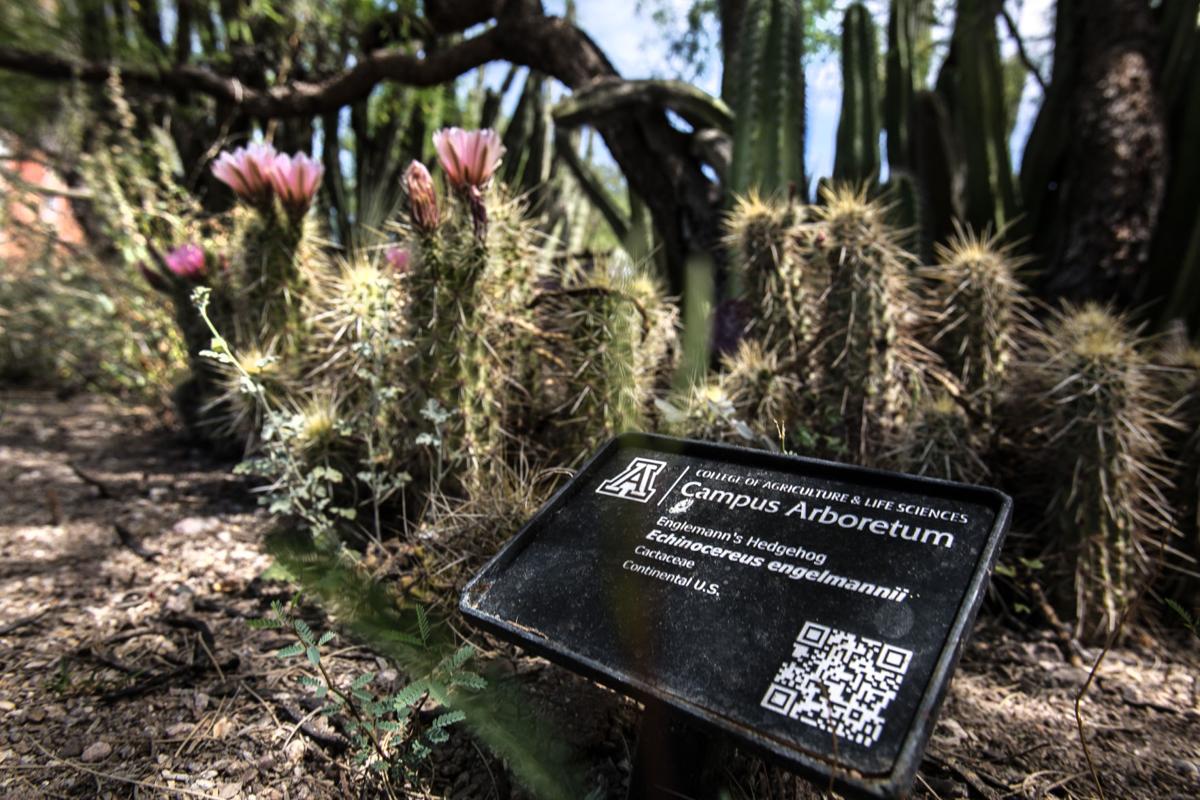 The Englemann’s hedgehog cactus, in the Joseph Wood Krutch Garden at the center of the UA Mall, is identified by a sign and a QR code.

Tanya Quist says she realized her work was bearing fruit when a University of Arizona physics professor blamed her for tripling the time it takes him to walk across campus.

Quist, director of the UA Arboretum, and her students have been busy for the past few years, adding new ways of learning about the thousands of trees and shrubs on campus.

Now, with a barcode reader on your mobile device, you can easily learn the taxonomy for more than 750 plant species and take a variety of guided tours that emphasize various aspects of the campus flora.

The entire campus, under cultivation since the 1890s, is officially designated a state arboretum. Many of its amazing plants, adapted to desert climates, are in full bloom right now, making spring a good time to stop and smell the roses, admire the orchid trees or gawk at the flowering cacti.

Many of the trees on campus already had signs, but the addition of barcodes that can be read on mobile devices broadens the amount of information you can learn about each one — not only its biology, but the history of the plants and the campus itself.

The labeling began after the aroboretum secured a grant from the UA Green Fund in 2014. Other additions include an interactive map of the 550 tree species and about 300 of the shrubs on the 387-acre campus.

Quist said a phone call from a physics professor was “the best moment in the last two years.”

“He said I’d ruined his life because he couldn’t get anywhere on campus now. It took him two or three times longer because I’d installed those barcodes. We have reached everyone if we’ve reached the physicists,” she said.

Quist said the cataloging of all the plants on campus is an ongoing activity, exemplified by her students’ recent creation of a mobile tour of the plantings at the UA’s Environment and Natural Resources 2 building, which opened in September 2015.

It was designed to resemble a slot canyon, with a wavy central courtyard defined by five stories of metal-accented stairs and balconies with hanging vines, where harvested rainwater drips from one floor to the next. Quist said the design created a variety of micro-climates where sunlit desert plants thrive next to shade-loving shrubs.

It was trial-and-error for the building’s designer, landscape architects, campus planners and the UA grounds crew, she said.

“The environment is so variable. It was really difficult to predict the light availability and the water availability. A lot of things died,” she said.

After the landscape stabilized, the arboretum was asked in November 2016 to create a tour. By March, a team of six undergraduate students had identified 4,000 vines, trees and shrubs, representing 45 unique species.

They mapped them, made signs and created a nine-stop online tour for those of us who don’t know their deergrass from a scarlet hedgenettle.

“The students identified the plants, as well as the trees and cacti and succulents,” said Quist, an associate professor in the UA School of Plant Sciences.

“This is how I anticipate it will be in the future. We will map and identify everything that comes into the landscape,” she said.

The ENR2 tour is one of eight short tours featuring plants that are tropical, edible, medicinal or historical. There is a tour of trees from around the world and two grouped by region into Mediterranean and Sonoran Desert. Information about the online tours, guided tours and an interactive map are available online at: arboretum.arizona.edu/

If you don’t want to do a short tour, feel free to stroll across campus with a barcode reader like that physics professor. Be prepared to spend some time.

Poet: Build solar 'wall' in Mexico, sell power to customers in US

Author, environmentalist to speak at University of Arizona in April.

An asteroid imaged at the Large Binocular Telescope on Mount Graham is swimming against the tide in the orbit of Jupiter.

Astronomer Christopher Walker will build an improved version of the "Frankenstein's monster" he assembled to prove his plan would work.

Watch: Down on the TUCSON farm

Maybe you're missing Iowa — or just want a look at some urban livestock, not to mention an alpaca. Check out the University of Arizona Campus …

Where are they now? A look at the Arizona Wildcats who left early for the NBA Draft

The University of Arizona Arboretum is the campus itself. There are more than 400 different tree species from around the world, and a comparable number of shrubs. Barcodes now allow visitors to learn more about the plants.

The Englemann’s hedgehog cactus, in the Joseph Wood Krutch Garden at the center of the UA Mall, is identified by a sign and a QR code.