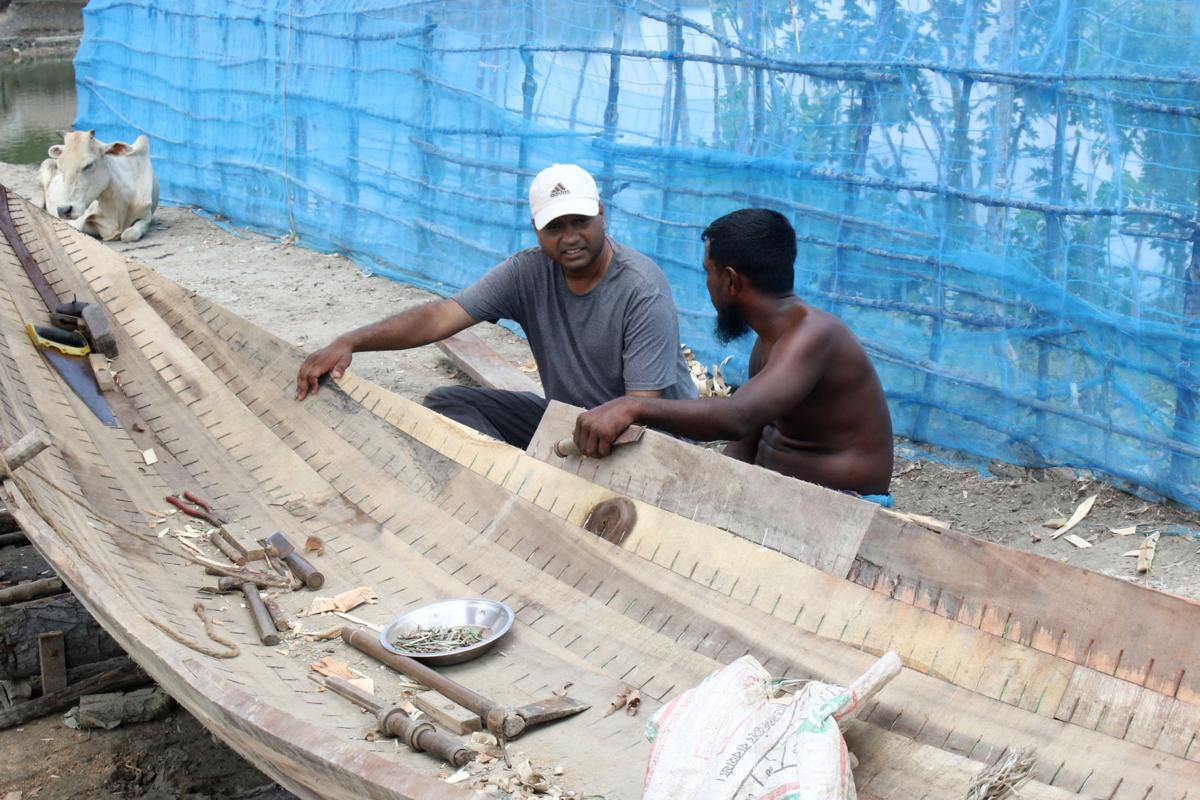 UA researcher Saleh Ahmed talks with a fisherman in Gabura, Satkhira, Bangladesh. The man is crafting his own traditional boat, known as a nowka. 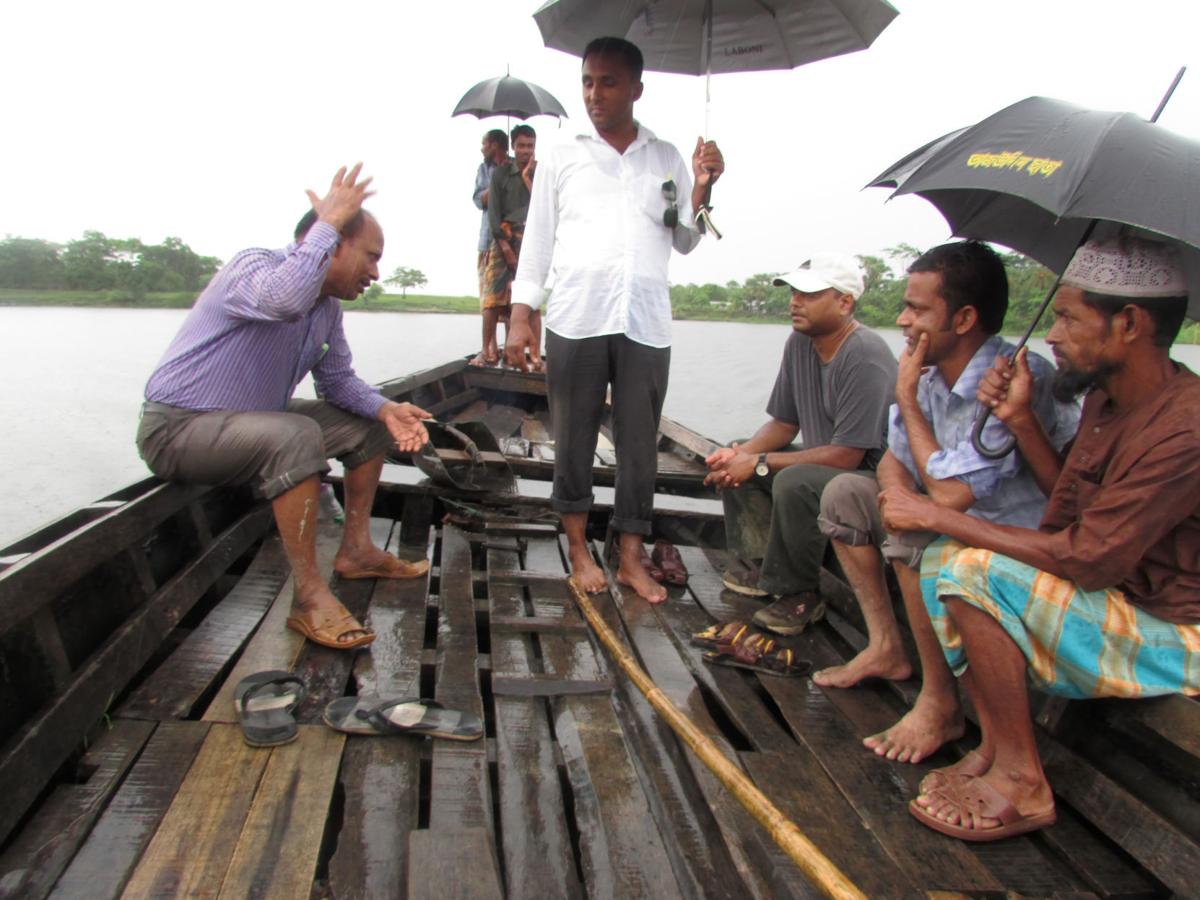 Saleh Ahmed (right, with white cap) talks with boat passengers traveling to their flooded-out village near Kalapara, Patuakhali in Bangladesh.

If your resolutions for this year include getting smarter, you’re in luck.

The UA College of Science offers four series of Science Cafés during the spring semester, some of them paired with pizza and beer.

Saleh Ahmed, a doctoral student in Arid Lands Resource Sciences, kicks things off at 6 p.m. Thursday at Borderlands Brewing, 119 E. Toole Ave., with a talk on his dissertation topic: preparing for climate change in Bangladesh.

The talk is appropriately titled “This Will Be Under Water: Climate Stresses in Coastal Bangladesh.”

Ahmed is one of the UA Carson Scholars, selected for a partial fellowship by the UA Institute of the Environment in exchange for communicating their environmental studies to the public.

Ahmed’s work focuses on how to communicate the expected effects of climate change to farmers and fishermen in coastal Bangladesh and devise mitigating polices.

Bangladesh, his home country, is the most-imperiled spot on the globe in a warming world, said Ahmed. “From the ice melting from the Himalaya and also the sea level rise of the Bay of Bengal, for the local people, climate change is not a political issue, it is too much a real and sad reality,” he said.

Ahmed’s fellow scholars will pursue the overall theme of “The Climate Clock” on the second Thursday of the next three months, with talks about climate studies in the northeastern United States, India and the Pyramid Lake Paiute reservation in northwestern Nevada.

It begins Jan. 17, with a talk by Scott Saleska, associate professor of ecology and evolutionary biology, titled: Earth: A Planet With a Pulse.”

Saleska, whose research takes him from the rain forests of the Amazon to the permafrost of Scandinavia, will talk about the Earth as a living, breathing organism.

In the following three months, prominent UA scientists will talk about wind patterns, the oceans and volcanoes.

The talks are free. You’ll have to buy your own pizza and beer.

The venue is quieter and the refreshments non-alcoholic at the library of the old Desert Laboratory midway up Tumamoc Hill.

Three talks on columnar cacti, desert tortoises and the hydrogeology of the Quitobaquito and Gran Desierto Wetlands will be given on three Wednesdays in February, March and April by naturalists who work on both sides of the U.S.-Mexico border.

Reservations are requested for that series, which provides a shuttle service up the hill. The first talk is Feb. 8 at 6 p.m.

Big data remains the topic for a continuing series of Science Cafes at the community of SaddleBrooke north of Tucson.

It begins Thursday at 6:30 p.m. in the Desert View Performing Arts Center with a talk by Carlos Scheidegger, UA assistant professor of computer science.

Information and directions about all four series are online at cos.arizona.edu/connections/for-the-public/ua-science-cafes

Is this 24/7 Tucson restaurant one of the country's best?

Restaurant is known for it's large portions and great prices.

Temperatures to drop to the mid-50s tomorrow, Monday.

Tucson researchers will attempt to identify and classify space debris — both natural and human-made.

The University of Arizona's 'pretty super' computers host a variety of research projects.

Oldest tree in Europe identified by University of Arizona researchers

School is the birthplace of tree-ring science.

A NASA Discovery mission to a hard-metal planet is the first on led by ASU's School of Earth and Space Sciences.

UA researcher Saleh Ahmed talks with a fisherman in Gabura, Satkhira, Bangladesh. The man is crafting his own traditional boat, known as a nowka.

Saleh Ahmed (right, with white cap) talks with boat passengers traveling to their flooded-out village near Kalapara, Patuakhali in Bangladesh.