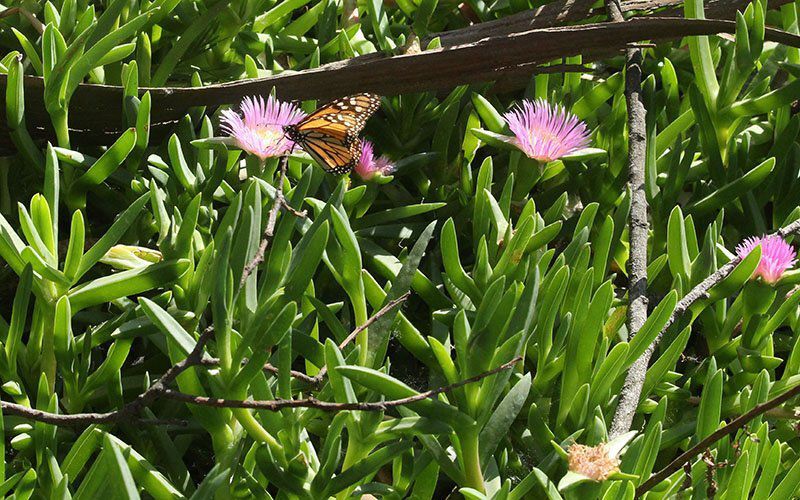 A monarch butterfly pollinates a flower at the Pismo Beach Butterfly Grove in Pismo Beach, California. 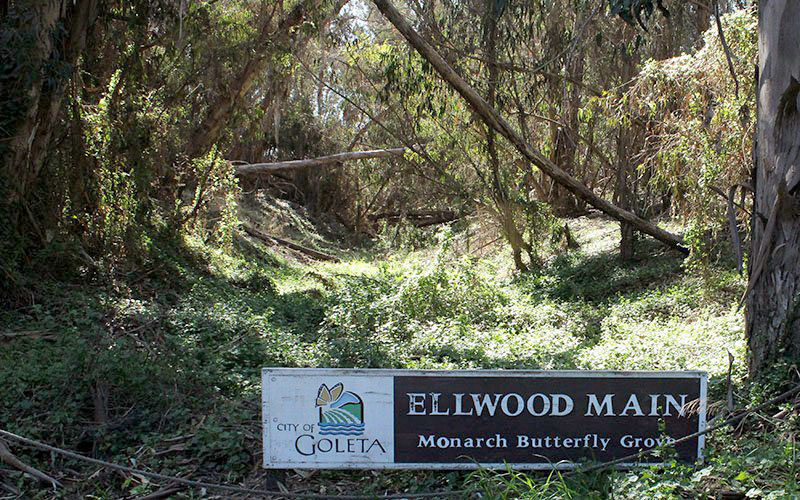 The Goleta Butterfly Grove, once a place where migrating monarchs flocked from October to February, saw few of the butterflies in 2020-21. 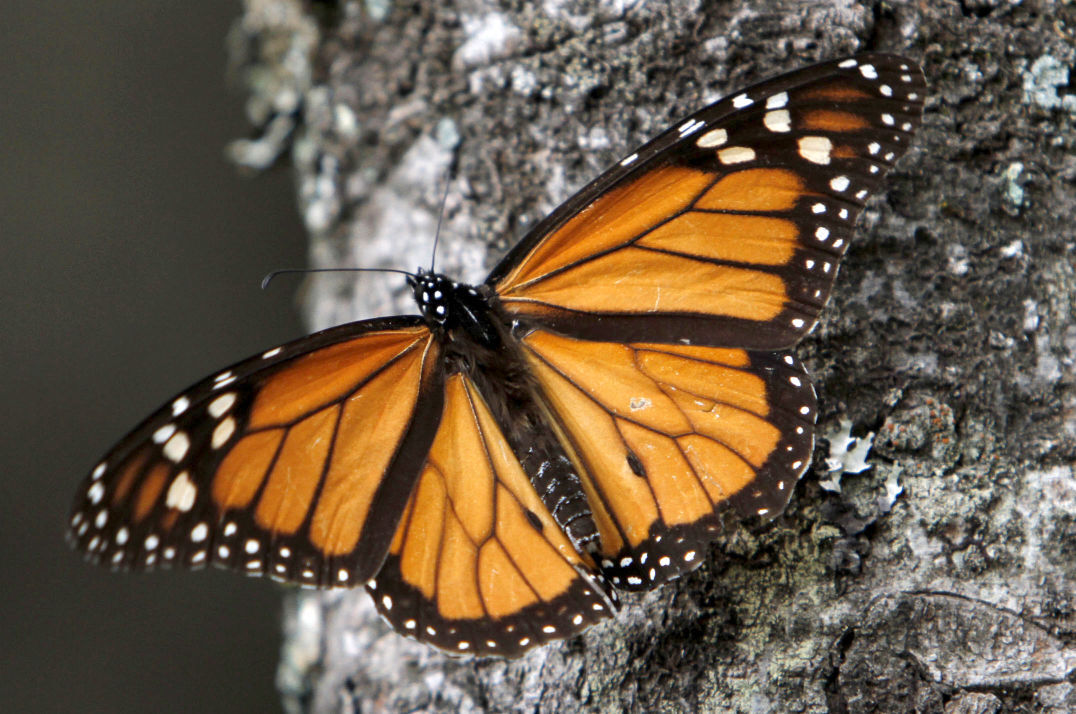 The U.S. Fish and Wildlife Service admits the monarch butterfly warrants protection but says other species need it more. 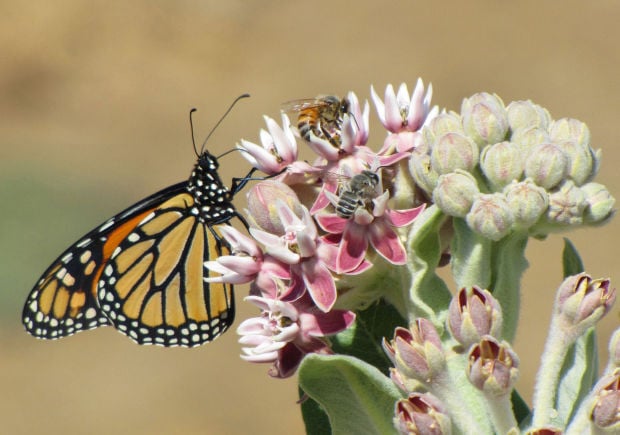 PHOENIX — The number of western monarch butterflies is declining alarmingly, which prompted a push to add the butterfly to the endangered species list in 2014. But after four years of review, the U.S. Fish and Wildlife Service has concluded that although the monarch butterfly warrants protection, dozens of other species face more urgent situations and have a higher priority.

The service uses its National Listing Workplan to prioritize species, including the cactus ferruginous pygmy-owl found in Arizona and Mexico, and the roundtail chub, a fish also found in Arizona. In fact, 64% of the species on this 20-page work plan maintain a higher priority than the monarch butterfly, according to the agency’s news release.

But now that the monarch is considered a candidate for protection, Fish and Wildlife will review its status annually to track any changes.

“We have several species ahead of the monarch that are our highest priority. Then in fiscal year 2024, we’ll propose the monarch to the endangered species list,” said Georgia Parham, public affairs specialist for Fish and Wildlife in Bloomington, Indiana.

The wildlife service uses its candidate species list to outline what species are eligible for inclusion on the endangered species list and what their priorities are. But some advocates for the monarch fear that 2024 is too late to save much of the migratory butterfly’s population.

“I am grateful that the Fish and Wildlife Service recognizes that the species warrants protection under the Endangered Species Act,” said Sarina Jepsen, endangered species program director at Xerces Society for Invertebrate Conservation. “But I am not sure that the western population of monarchs can wait until 2024, so I worry that that is too long for them.”

Monarchs are the only butterflies known to make two-way migrations, as birds do, the U.S. Forest Service says, and it takes several generations to complete each leg of the journey. To escape harsh winters in the northern U.S., western monarchs can travel nearly 3,000 miles to reach the California coast, Arizona and Michoacán state in Mexico, the Forest Service says.

Thousands of western monarchs traditionally spend October through February in California’s coastal butterfly groves, but in recent decades the population has dropped dramatically.

In February, U.S. Reps. Salud Carbajal and Jimmy Panetta, both Democrats of California, sent a letter to Fish and Wildlife pleading to get the butterflies on the list, saying that “two decades ago, roughly 1.2 million monarchs” would spend winters on California’s central coast, but “this year, that number is down to 1,914.” With the population at a vulnerable point, the hope is that increased protection will help foster more habitable areas for butterflies that eventually will lead to an uptick in the population.

On a late-February visit to Pismo Beach Monarch Butterfly Grove in Southern California, few of the striking orange and black monarchs were spotted. The coastal nature preserve offered a friendly habitat to western monarchs, which drew sightseers by the thousands, but on this day, the once-packed butterfly groves were mostly barren. The scene has repeated all along the coast north to Oregon the past few years.

Every year, the Xerces Society conducts a census of the western monarch population when the butterflies gather at overwintering sites all across the United States and parts of Mexico. As recently as 1997, more than 1 million monarchs were seen across California sites.

“For several years,” Jepsen said, “we would routinely count a few hundred thousand monarchs at overwintering sites. Then, about three years ago, we counted less than 30,000. It truly shocked us.”

In 2014, the Xerces Society teamed up with the Tucson-based Center for Biological Diversity, the Center for Food Safety and a private individual to petition Fish and Wildlife to add the monarchs to the endangered species list.

“Forty-seven species have gone extinct waiting for their protection to be finalized,” Tierra Curry, senior scientist at the Center for Biological Diversity, said in a news release. “This decision continues the delay in implementing a national recovery plan which monarchs desperately need.

“Monarchs are beautiful, they play important roles in nature and culture, and their migrations are jaw-dropping. We owe them and future generations an all-in commitment to their recovery.”

The butterflies usually arrive at their overwintering sites in Mexico and California in October. Mexican folklore believes their wings are carrying departed souls for the Day of the Dead in November. When the monarchs head back north in the spring, it takes four generations for the round-trip journey to be completed, according to the University of Minnesota’s Monarch Lab research.

Since filing their petition in 2014, Xerces and the centers for Biological Diversity and Food Safety have continued their research. Endangered status would ensure federal protections by allowing Fish and Wildlife to develop and implement recovery plans, and to place restrictions on transporting, selling and killing species, among other measures. Fish and Wildlife defines an endangered species as one “that is in danger of extinction throughout all or a significant portion of its range.”

The wildlife service in 2016 announced a yearlong assessment to determine the monarch’s status. The Monarch Species Status Assessment identified the needs of the butterflies and gathered information and data about their status, including threats and stressors to their environment.

After nearly three more years of data gathering, evaluation and sharing results, the Fish and Wildlife Service officially determined last December that adding the monarch butterfly to the endangered species list was “warranted but precluded by work on higher-priority listing actions.”

According to the Endangered Species Act of 1973, the species will be considered threatened or endangered if they meet one of the five factors, including the destruction of habitat, disease and climate change. The assessment found monarchs are suffering from two of these factors.

“The threats to the monarch include things like loss of wintering habitat and modification of wintering habitat, including the use of insecticides,” said Parham, the Fish and Wildlife spokesperson. “We also looked at impacts from climate change as those seasonal things change along the migratory route.”

Certain types of milkweed are critical for monarchs, but, across the nation, these plants are being destroyed by insecticide use and climate change, Parham said, adding that not enough milkweed is being planted.

In Arizona, the Desert Botanical Garden is trying to address this decline by planting several varieties of milkweed, while also educating the public about monarch habitat.

Meanwhile, the Fish and Wildlife Service says it’s committed to conservation efforts until the 2024 proposal.

“We’ve got plant guides for milkweed,” Parham said. “We’ve got planting guides for nectar and flowers. We also have a lot of efforts going into working with agricultural communities with federal agencies like the U.S. Department of Agriculture to encourage farmers, ranchers and others to provide for monarch habitats on their lands.”

Fish and Wildlife also is working with partners in transportation and energy, the National Parks Service and the U.S. Forest Service to potentially create millions of acres of new monarch habitat in the coming years.

Jepsen isn’t sure the butterflies have that much time.

“A lot of people grew up with monarchs in various western states, and they aren’t going to have them in the very near future if we don’t do something,” she said.

You can also learn more about monarchs from the Arizona-Sonora Desert Musem at desertmuseum.org/pollination/monarchs .

Environmentalists cite a population drop of more than 90 percent.

Pollinators, like bees and hummingbirds, are on the decline. Here's how you can help them fight back.

Birds, bees and butterflies are celebrating spring not only in the wild, but also in the midtown gardens of the Tucson Audubon Society. Video …

A monarch butterfly pollinates a flower at the Pismo Beach Butterfly Grove in Pismo Beach, California.

The Goleta Butterfly Grove, once a place where migrating monarchs flocked from October to February, saw few of the butterflies in 2020-21.

The U.S. Fish and Wildlife Service admits the monarch butterfly warrants protection but says other species need it more.