Read Today's E-Edition
Share This
Arizona budget proposal is bigger than the $15.6 billion advertised
Share this
1 of 2 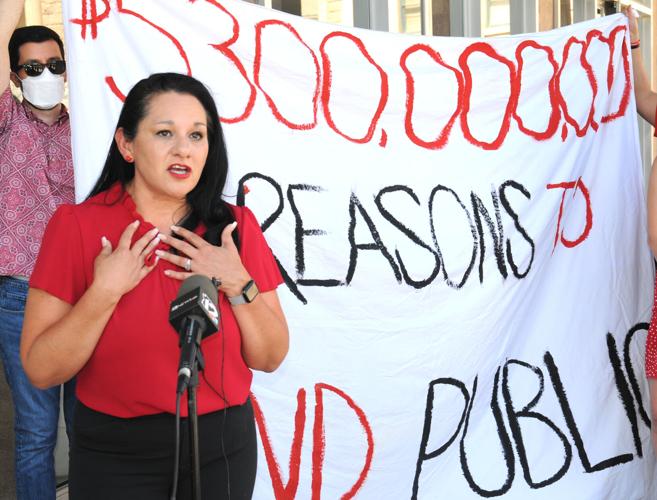 Marisol Garcia, vice president of the Arizona Education Association, chides Republican lawmakers for not offering a spending plan that puts more money into public schools, given the state’s $5.3 billion surplus. 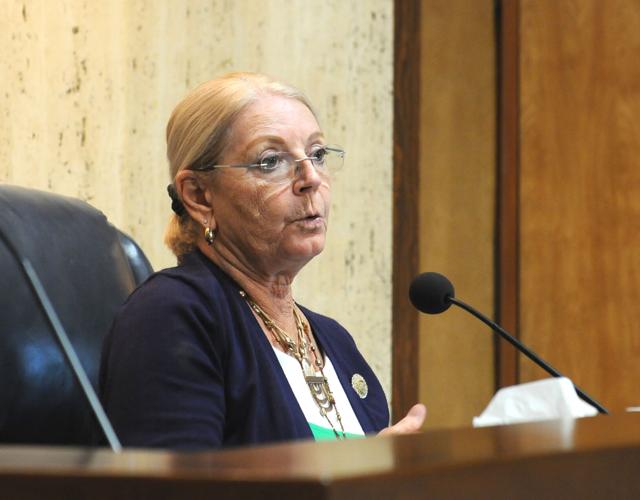 Senate President Karen Fann discusses the proposed budget for the fiscal year that begins July 1 along with the problems of trying to cobble together the necessary votes.

PHOENIX — Republican legislative leaders are trying to sell what they have billed as a $15.6 billion budget for the new fiscal year that begins July 1 but actually contains billions more in spending buried in the details.

But as of late Tuesday prospects were falling apart as Sen. David Gowan, R-Sierra Vista, refused to advance the spending plan after he accused House leadership of reneging on a promise.

Senate President Karen Fann told Capitol Media Services there had been a deal for the House to approve four Senate priorities before a final vote on the budget. These include continuation of the Arizona Board of Regents, a new tax credit for companies making films in Arizona and creation of a Southern Arizona Tourism Authority.

Only thing is, Rep. Travis Grantham, R-Gilbert, refused to give the measures a hearing in the House Rules Committee which he chairs. So Gowan, who chairs the Senate Appropriation Committee and is the sponsor of two of those bills, sent the members home rather than review the budget, stalling the process.

Grantham said he has done nothing wrong.

“I have never discussed a deal, agreed to a deal or been part of some secretive deal to move a certain senator’s special interest bills that are fat, bloated and in some instances likely unconstitutional,’’ he said.

The problem in lining up the votes, according to Senate President Karen Fann, is that the state, flush with tax proceeds, has a $5.3 billion surplus. That means everyone has an idea of how to spend all that cash, she said.

The state went through those times more than a decade ago, not only having to cut spending and get voter approval for a temporary 1-cent sales tax increase, but also borrowing money by selling off state buildings with an option to lease them and eventually buy them back.

“Now we have like a boom year, our chance to really, really invest in K through 12, higher ed, infrastructure, pay off some of our credit cards, our debt,’’ Fann said.

“We have this one-time miracle opportunity to do so many great things,’’ she continued. “And here we are arguing because ‘it’s not enough.’”

That’s exactly the claim being raised by Marisol Garcia, vice president of the Arizona Education Association. She contends state revenues leave enough to provide an additional $1.2 billion for public education.

The GOP legislative leaders are advertising their plan as adding close to $900 million to K-12.

But that isn’t exactly true. The new dollars being put into the base for the coming year — ongoing funds on which schools can rely year after year — is only about $540 million.

How the GOP legislative leaders get to their higher figure is by including anticipated future spending, dollars that won’t be available until at least the 2023-204 school year.

And these are earmarked not for overall state aid that schools can use as they decide is appropriate, but for specific programs, such as increasing state aid for teaching students from low-income households and providing additional money for educating English language learners.

There also is a one-time infusion of $200 million for school construction and repair. Plus it includes the inflation index mandated by voters, though that is just 2%.

And buried in all the numbers is something else: The actual spending plan that Republicans want to approve is bigger than that $15.6 billion figure they claim is the bottom line. A lot bigger.

The key is the use of budgetary maneuvers.

For example, the $15.6 billion figure does not include close to $1 billion in earmarks for road projects sought by individual lawmakers. They get around putting those dollars into the budget — where they would have to be accounted for — by instead directing the state treasurer to take that money out of sales tax proceeds and give it directly to the Department of Transportation.

Another bit of budgetary sleight of hand is $335 million set aside to build a border fence. Here, too, the dollars aren’t accounted for in the $15.6 billion spending plan but are a direct diversion of sales tax money.

Ditto for another $209 million for a “border security fund’’ to provide more dollars for things like aid to local sheriffs and prosecutors; $334 million for a yet-to-be-enacted plan to secure more water; and a $425 million deposit into the state’s “rainy day’’ fund.

Garcia said it’s clear the state can do more for education.

“We have an influx of money to the point where the state has never seen,’’ she said.

That’s also the assessment of most Democratic legislators, who say they can’t support a spending plan they believe shorts public education.

On the flip side, however, some Republicans consider the spending plan too large.

“This is the most over-the-top, spendingest budget ever,’’ said Sen. Michelle Ugenti-Rita, R-Scottsdale.

She is holding out for a big tax cut, in the neighborhood of $1 billion.

She isn’t dissuaded by concerns that would eat into what’s available for K-12 funding, saying voters care more about their own finances.

And Ugenti-Rita said if there is a recession looming, it makes no sense to increase state spending. Rather, she said, leave the money in the taxpayers’ pockets.

So far, she said, those pleas to GOP leadership have fallen on deaf ears.

“When I have conversations with them about taxpayer relief, cutting, they act like I’m speaking Mandarin,’’ Ugenti-Rita said.

Fann said the refusal of some Republicans to go along with the leadership plan has put her in the position of having to craft a budget designed to attract at least some Democratic votes.

So, for example, the plan includes more money for providers of services to the disabled. There’s also additional money for universities and $87.5 million for the housing trust fund that helps build affordable homes.

But then there’s a $330 million cut in property taxes. The big winners there, by definition, will be the businesses with the most taxable property, including the utilities.

Fann does not dispute that. But she said that’s not why the cut is in the plan.

“The reason why we did it is because of the 8% inflation that’s going on right now, and particularly our senior citizens that are living on fixed incomes, much less our low-income people,’’ Fann said. “They’re getting run out of their homes.’’

But Republicans were cool to another proposal to help those at the bottom of the income scale: an earned income tax credit for those making less than $50,000 a year.

Proposed by Republican Gov. Doug Ducey, it would help about 572,000 taxpayers with an average benefit of $128 a year, according to the governor’s aides. It’s modeled after a similar credit that anti-poverty advocates have said is a boon to low-wage workers, providing a lump sum of cash at tax-filing time.

Fann said that proved to be a non-starter. “I have members that did not want it,’’ she said of her GOP majority.

Being proposed instead “as a compromise’’ is eliminating cities’ ability to levy a sales tax on residential rentals, something that cuts into local revenues but doesn’t affect the state’s bottom line.

All this assumes the votes can be corralled for the plan, a prospect so nebulous that there’s a Plan B: adopt a “skinny budget’’ that effectively keeps the state operating at current levels, putting off decisions on expanded funding until after the new fiscal year begins. The House Appropriations Committee voted for that plan Tuesday in case the full-blown GOP budget, which it also approved, ultimately falters.

“If I can’t get these guys on … I’m going to start taking things out of this budget,’’ she said. The reason much of this new spending was included was to get the necessary votes ahead of the July 1 deadline, Fann said. But if there aren’t the votes for the package as it is, she said, then the state has to be prepared to keep the lights on after June 30.

“We may end up doing a skinny budget next week because we’re not going to let government shut down because I have a few members that are saying, ‘it’s not enough,’ ‘’ she said.

There are signs a bipartisan budget might be possible.

On Tuesday, Rep. Cesar Chavez, D-Phoenix, voted with the Republicans in the House Appropriations Committee to support the GOP plan.

He said he is concerned the state is rapidly closing in on the new budget year. And if there is no adopted budget, Chavez said, state agencies will have to shut down, something he said is unacceptable.

But Rep. Jake Hoffman, R-Queen Creek, a member of the same committee, refused to go along with GOP colleagues, saying the spending plan is too large.

GOP lawmakers added projects that the state Transportation Board has not be included in what the agency considers the top priorities for the state.

Arizona voters said 'no' — but universal school vouchers plan is back

For Star subscribers: Four years after voters rejected a similar plan, GOP lawmakers are pushing ahead with a plan to let any of the 1.1 million students in Arizona public schools get vouchers to attend private and parochial schools.

For Star subscribers: Gov. Doug Ducey and GOP legislative leaders are trying to line up the votes for a $15.1 billion spending plan that includes more money for border security than for new unrestricted operating funds for public schools.

Unable to get votes from their own members, Republican legislative leaders agreed to more education funding in the budget to get the necessary support from Democrats.

Watch now: All four verses of the National Anthem

Watch now: All four verses of the National Anthem

Marisol Garcia, vice president of the Arizona Education Association, chides Republican lawmakers for not offering a spending plan that puts more money into public schools, given the state’s $5.3 billion surplus.

Senate President Karen Fann discusses the proposed budget for the fiscal year that begins July 1 along with the problems of trying to cobble together the necessary votes.