PHOENIX — State senators pulled the plug Tuesday on the legislative session, leaving unresolved the question of whether businesses should get special protection from COVID-19 lawsuits.

Democrats have objected all along to continued routine business by the Republican-controlled Legislature while they say crucial pandemic-related issues are left unresolved. Key among those is the question of aid to what may now be 600,000 Arizonans who have lost their jobs.

That sentiment was shared by some across the political aisle.

“We have much bigger fish to fry ... in issues related to the COVID virus and economic recovery,” said Sen. Kate Brophy McGee, R-Phoenix. “And that’s what I’m focused on.”

He is an architect of the measure designed to provide additional protection to businesses from claims that their actions or inactions caused customers and employees to contract the virus.

That measure, approved earlier this month by the House, would have allowed COVID-19 lawsuits only if a business acted with gross negligence, essentially the reckless disregard for the consequences of the action on others. By contrast, other lawsuits for injury or death proceed under a simple negligence standard.

So, in the case of an automobile accident, someone who is injured need show only that the other party was negligent, such as speeding, not paying attention or ignoring traffic lights. There is no need to prove, in order to collect damages, that the other driver was acting with reckless disregard for others.

Farnsworth was not comforted by assurances that the issue of liability will be addressed in a yet-to-be-called special session.

“What we’ve done is we’ve left those businesses hanging at a time where we have a tremendous economic downturn,” he said, citing first-time claims for unemployment insurance that now total 17% of the state workforce.

“That’s crazy high,” Farnsworth said. “So for us to abdicate our responsibilities and walk away from this job is, in my opinion, unconscionable.”

But Senate President Karen Fann, R-Prescott, said many believe the House-passed legislation was not quite ready to be enacted into law.

“Our chambers (of commerce) and some of our business members felt that there were possibilities there were a couple of holes in it that may not have solidified their protection,” she said.

Then there are issues of whether local governments also should be entitled to be shielded from such lawsuits.

Finally there is the question of whether the legislation should preclude employees from being able to sue if a company’s practices result in illness and death.

“Good legislation, good policy means that you look out for unintended consequences and you make sure that it’s fair and balanced for everybody,” Fann said.

She sidestepped the question of whether employers who do not provide proper equipment should be subject to lawsuit.

“I am not going to conjecture anything,” she said. “But I will say I think all of us will be looking at legislation to make sure it strikes a good balance so there is a protection for employees as well as employers,” she said.

Farnsworth dismisses that as unnecessary. He said there already are general standards in place for protections employers must provide to workers. Farnsworth said he sees no reason for any special protection for COVID-19, any more than to provide protections from the seasonal flu.

Rep. John Kavanagh, R-Fountain Hills, who pushed the bill through the House, said the measure did contain some protections for workers.

“If an employer intentionally, knowingly, recklessly or with gross negligence didn’t protect employees, they could be sued,” he said. “We just got rid of negligence (as a standard) because it’s such a low bar and everything is so uncertain with these COVID regulations.”

For Farnsworth, the issue is simpler.

“If an employee isn’t comfortable, then they can find a job with somebody who is going to make them feel comfortable,” he said. “That’s the market system.”

The primary issue the bill posed for lawmakers is under what circumstances a business should get a shield against lawsuits.

There is an alternate way of dealing with the issue — to provide protections when businesses follow certain protocols. For example, the Centers for Disease Control and Prevention has recommended wearing masks in certain situations.

“We have mixed signals right now with what’s going on out there in the medical industry,” he said.

Kavanagh also said such a test is unworkable. He said it could leave businesses liable when customers don’t follow the protocols.

More significant, he said, is that simple mistakes could lead to lawsuits.

While standing in line for self-service checkout at a building supply store, Kavanagh said he noticed that the staff is not disinfecting the hand-held scanners that customers use to ring up their items.

“I mean, everyone’s got a phone, everyone can take pictures,” he said. “People could take pictures of those not following the guidelines and start suing them. It could backfire.”

It isn’t just the liability language in the legislation that was raising questions, however.

The bill also would have stripped out the ability for police and prosecutors to charge anyone who violates a gubernatorial executive order issued during an emergency with a Class 1 misdemeanor carrying a potential six-month jail term and up to a $2,500 fine.

In its place would have been a $100 civil fine —one that would be forgiven if the individual or business owner came into compliance before the court date.

The governor hasn’t weighed in on whether he would sign such a measure.

State Sen. Eddie Farnsworth blames Attorney General Mark Brnovich for the failure of his legislation to require prosecutors to first get a criminal conviction before seizing property.

Arizona House votes to make it harder to sue businesses, others over COVID-19 claims

Victims or their survivors could sue only if they could show someone was grossly negligent, rather than merely negligent.

Measure would provide some protection for Arizonans with pre-existing health conditions if the U.S. Supreme Court voids the federal law.

The number of confirmed coronavirus cases across Arizona is 17,262, the Arizona Department of Health Services said.

The University of Arizona is hosting a live briefing that will provide information about how the university is preparing for the fall semester.

Governor is allocating only $441 million, a quarter of the more than $1.9 billion he is getting in coronavirus relief dollars. He'll set aside most of the rest for the state's future needs. 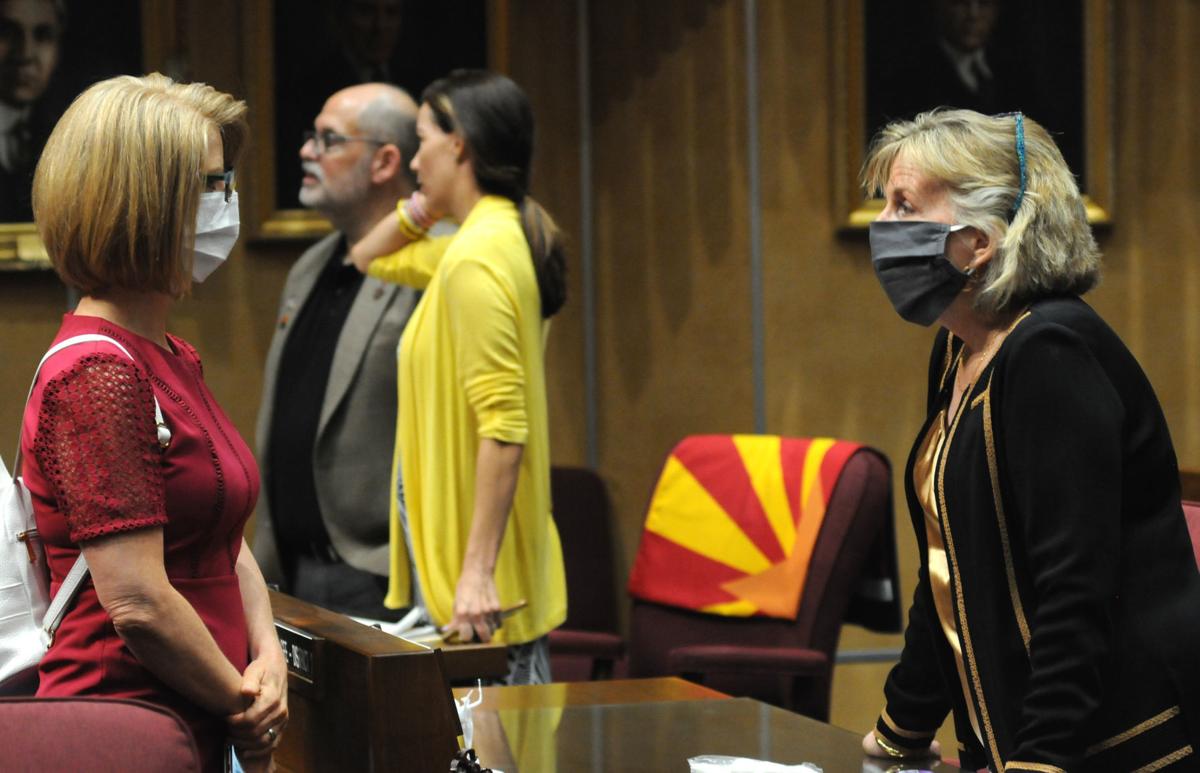 Republican Sens. Heather Carter, left, and Kate Brophy McGee discussed Senate action Tuesday before they both voted with Democrats to shut down the regular legislative session for the year. 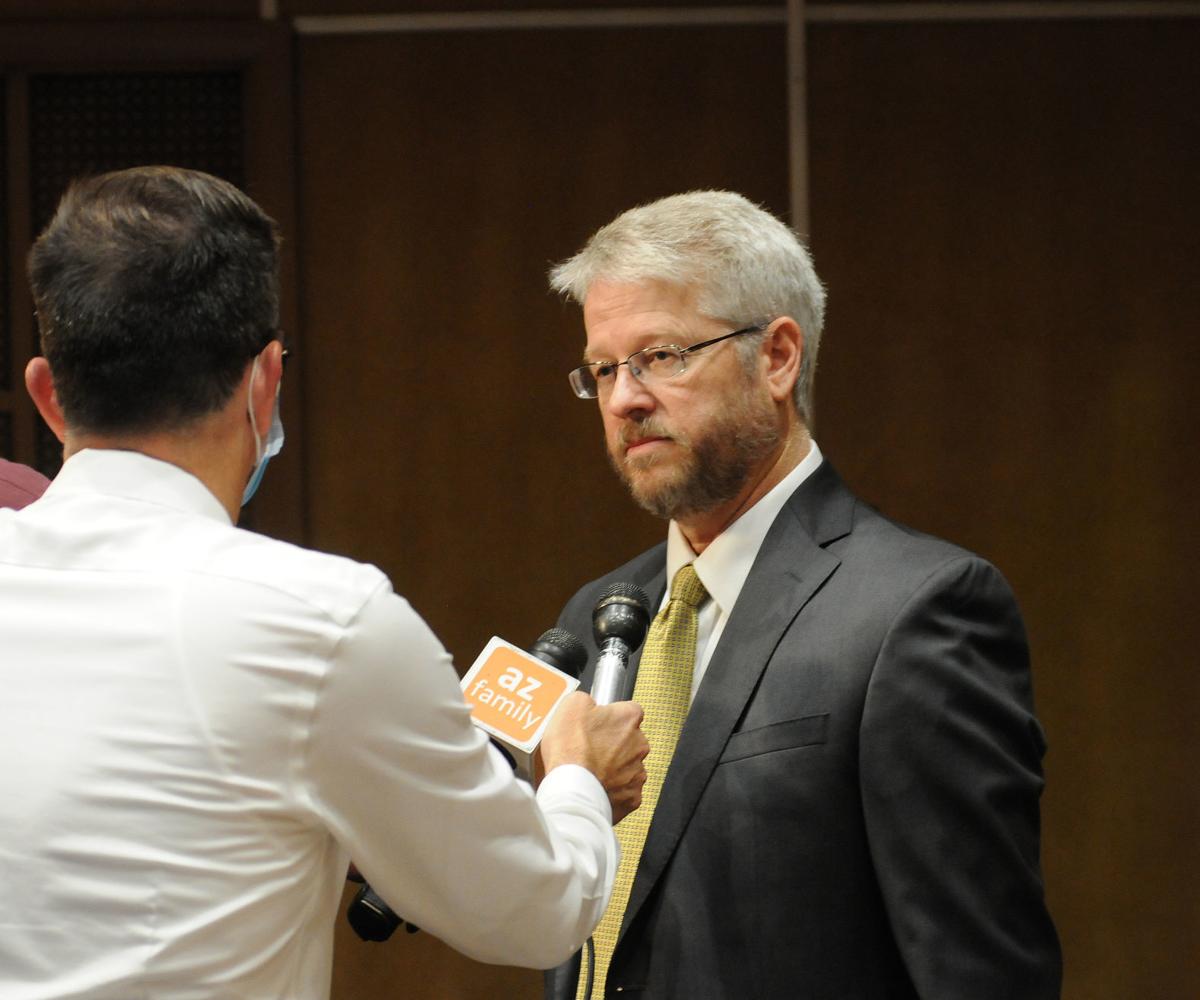