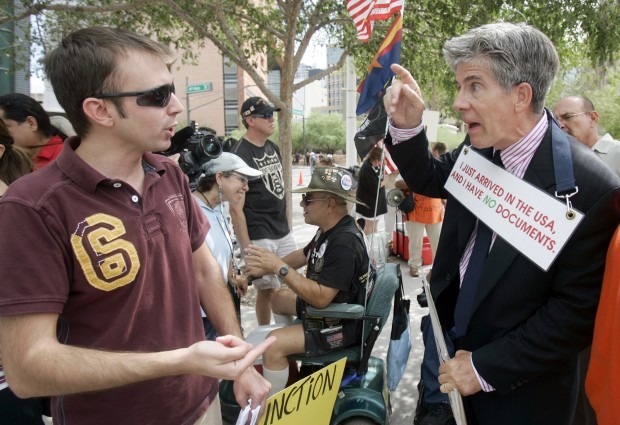 Brian Berklend, left, an SB1070 supporter, argues with George Clifton, who opposes the bill, during a demonstration near the Sandra Day O'Connor U.S. Courthouse in downtown Phoenix. 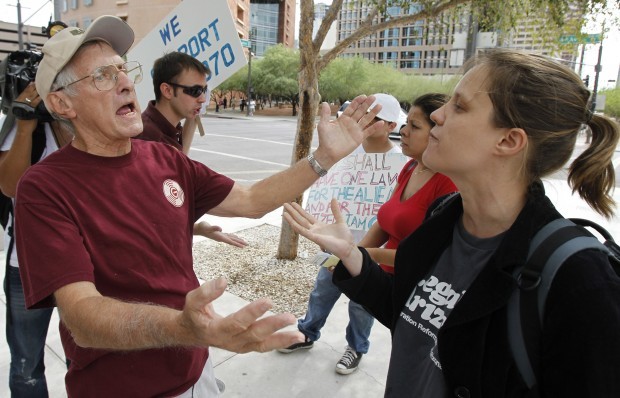 Jerry Harris, left, of Scottsdale, a supporter of SB1070, argues with Elizabeth Venable, of Phoenix, who is against the SB1070 Arizona immigration law, in front of U.S. District Court Thursday, July 22, 2010, in Phoenix.
Howard Fischer, Capitol Media Services

PHOENIX — A federal judge peppered attorneys fighting over the legality of Arizona's new immigration law with questions about their assumptions of what the law means.

Omar Jadwat, representing the Mexican American Legal Defense and Educational Fund, said Congress never made it a crime for those in this country illegally to seek casual employment. He told U.S. District Court Judge Susan Bolton during a hearing Thursday that federal lawmakers wanted to specifically preempt what Arizona has done with a provision of SB 1070 making it a violation of state law for undocumented workers to try to get work.

But Bolton told Jadwat he is making a presumption about what Congress intended.

"Or did they just not deal with it?'' she asked. The judge cited other sections of federal immigration laws which contain specific provisions barring actions by state and local governments.

"We know Congress knows how to preempt expressly,'' the judge said.

But Bolton did not spare John Bouma, the attorney for Gov. Jan Brewer, from her inquisitions.

One section of the law that appeared to be giving the judge heartburn spells out that anyone arrested for any reason cannot be released until their immigration status is checked with federal officials.

She pointed out that police "arrest'' people all the time for minor crimes, issue them a citation and let them go about their business. Bolton said this provision of SB 1070 would appear to require police to hold people for some extra period of time — one attorney said it can take an average of 88 minutes to get a response from Immigration and Customs Enforcement — beyond what is necessary to cite and release.

Bouma said lawmakers meant to apply that only to people who actually are taken into custody and "booked'' into jail.

"That's what they should have said then,'' Bolton responded. She said it could result in detaining tens of thousands of people "who otherwise could be cited and released.''

The questioning is significant because the judge is weighing each of the provisions in the law to determine if there is sufficient legal reason to bar any or all of them from taking effect as scheduled on July 29.

As part of that determination, the judge needs to make at least a preliminary decision on whether the provisions of the law are constitutional. If she believes some sections are not legal — and if she determines there the harms to some if the law is allowed to proceed are sufficient — then she will place the law on "hold'' until there can be a full hearing on its legality.

Bolton's questioning made it clear, though, that she will not invalidate the entire law.

She said there are sections of the measure that do not directly relate to the questioning of suspected illegal immigrants.

The judge also pointed to a recent ruling by the 9th Circuit Court of Appeals which upheld ordinances of a California community which restricted where day laborers can solicit employment. Bolton said that likely upholds sections in SB 1070 which make it illegal to stop on public streets to hire temporary workers or try to seek employment in those situations.

Lawmakers who crafted the statute apparently anticipated such a possibility: SB 1070 contains a "severability clause,'' saying a court declaration that one or more sections are illegal does not invalidate the entire measure.

That can be significant as the law contains several key provisions.

One of the more controversial requires police who have stopped someone for any reason to check their immigration status if they have "reasonable suspicion'' they are in this country illegally. Another makes it a state crime for a non-citizen not to carry the federally required identification documents, language that foes say effectively lets state and local police charge illegal immigrants with violating state laws.

But there are other sections that no one is seriously challenging, such as minor changes in Arizona's separate law allowing a judge to suspend or revoke the licenses of companies that knowingly employ undocumented workers.

Constitutional issues aside, Bolton was also focused on that issue of harm, a key element in any decision she has to make about granting an injunction. Bouma said the claims presented by the individuals and groups represented by MALDEF and others are speculative at best.

"People talk about what they fear will happen,'' he said.

But MALDEF attorney Nina Perales said there are real dangers to some. That specifically includes residents of New Mexico.

SB 1070 lists those documents someone can produce to prove legal presence in this country. That includes an Arizona driver's license and the licenses from any other state which require motorists to show they have a right to be in this country.

Several states, however, including New Mexico, do not have that requirement, making their licenses useless in proving, if questioned, they are legal residents of this country.

Hundreds of people show up to show their support and opposition to SB1070 during a demonstration near the Sandra Day O'Connor U.S. Courthouse …

Brian Berklend, left, an SB1070 supporter, argues with George Clifton, who opposes the bill, during a demonstration near the Sandra Day O'Connor U.S. Courthouse in downtown Phoenix.

Jerry Harris, left, of Scottsdale, a supporter of SB1070, argues with Elizabeth Venable, of Phoenix, who is against the SB1070 Arizona immigration law, in front of U.S. District Court Thursday, July 22, 2010, in Phoenix.
© Copyright 2022 Arizona Daily Star, PO Box 26887 Tucson, AZ 85726-6887 | Terms of Use | Privacy Policy | Do Not Sell My Info | Cookie Preferences
Powered by BLOX Content Management System from TownNews.com.
You don't have any notifications.