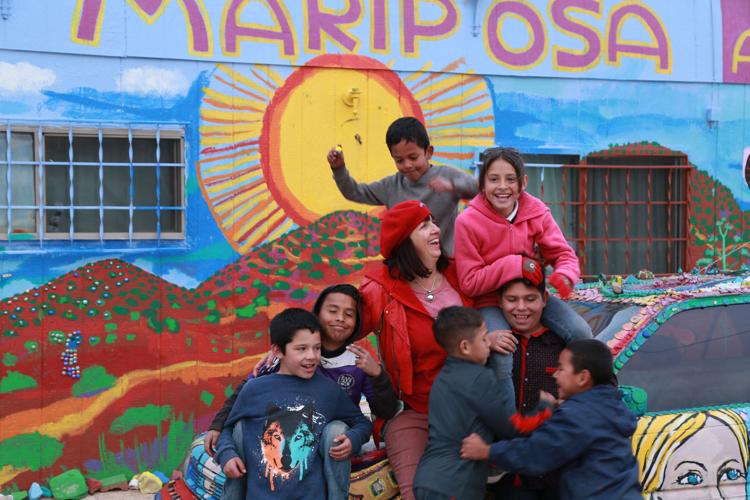 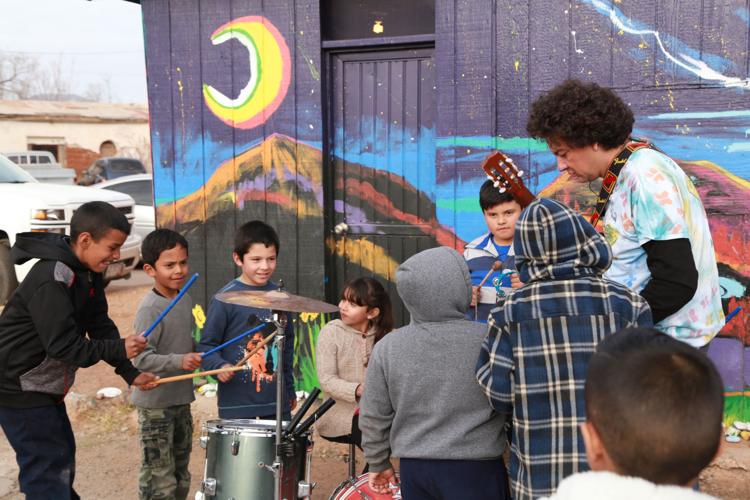 Children in the Sonoran border town of Naco learn how to play instruments from music director Mike Montoya, right.

NACO, Sonora — If you travel to the small border town of Naco, the first thing to catch your eye is a small, gloriously colored building that sits fewer than 500 feet from the port of entry.

It’s called Studio Mariposa, an idea that began with Bisbee artist Gretchen Baer’s desire to provide a place of free expression through art and music for the Mexican children of Naco.

Eight years ago, Baer and the kids began painting a mile-long mural along the wall on the U.S.-Mexico border. Last spring, that portion of the wall was torn down to make way for new fencing. Baer was sad to see the artwork go, but she decided to channel the kids’ creativity into a new project.

“The border wall is nothing,” Baer said. “It doesn’t stop art from happening, kids from being kids or loving to make music together.”

Studio Mariposa serves as a gathering place for children to create arts and crafts, but over the past year it has grown to become home of the Mariposa Band. Baer wanted to give the children an opportunity to learn how to play different instruments and create original music. Now, musicians from the U.S. cross the border twice a week to play and teach music.

Guitarist Eric Kruske said the project would not be possible without Baer’s vision.

“She dreams, and then she makes the dreams come true,” he said.

“She said to me, ‘I had a dream, and you guys were playing music and the kids were playing, too!’ And I said, ‘Well, let’s teach them.’”

Studio Mariposa’s message is that children and adults from different countries can create harmony and find meaning through the magic of music.

“I know that we all light up when we’re here,” Kruske said. “Everybody here comes down, and comes down again, and we all keep coming back. And the rewards are, really, that it feels good to help these kids.”

News of the project has spread throughout the U.S. and brought help. The studio relies solely on donations and musicians who volunteer their time. Their only drum kit came from the East Coast. Someone else decided to donate a set of flutes. For Baer, the outpouring of support has served as a healing process of sorts during a time she described as politically challenging.

Oscar is one of the children who eagerly flock to Studio Mariposa immediately after school to begin playing . Although there is a language barrier between him and the musicians, the mutual trust is evident.

“They’re good people, because there are some from the U.S. who won’t do this,” he said. “They teach us and are kind to us.”

For the children living in tiny Naco, an opportunity like this is hard to come by. One of them, Josue Gonzalez, comes from a large family and wouldn’t have the means to get this experience anywhere else.

“It’s beyond my imagination,” Josue said.

He plays in the band every week and has found a love for the drums. Many of the families in Naco struggle to make ends meet and would not otherwise be able to pay for their children to get music lessons.

“It’s OK on the other side; in fact, it’s really nice over here. It’s colorful, the people are warm and loving, there’s a lot of laughter. The kids are great! What’s not to love?” Baer said.

Turns out we're just a short drive away from a top travel destination in 2018.

Paleontologists accidentally discover the first brain ever known to have evolved

Paleontologists accidentally discover the first brain ever known to have evolved

Children in the Sonoran border town of Naco learn how to play instruments from music director Mike Montoya, right.