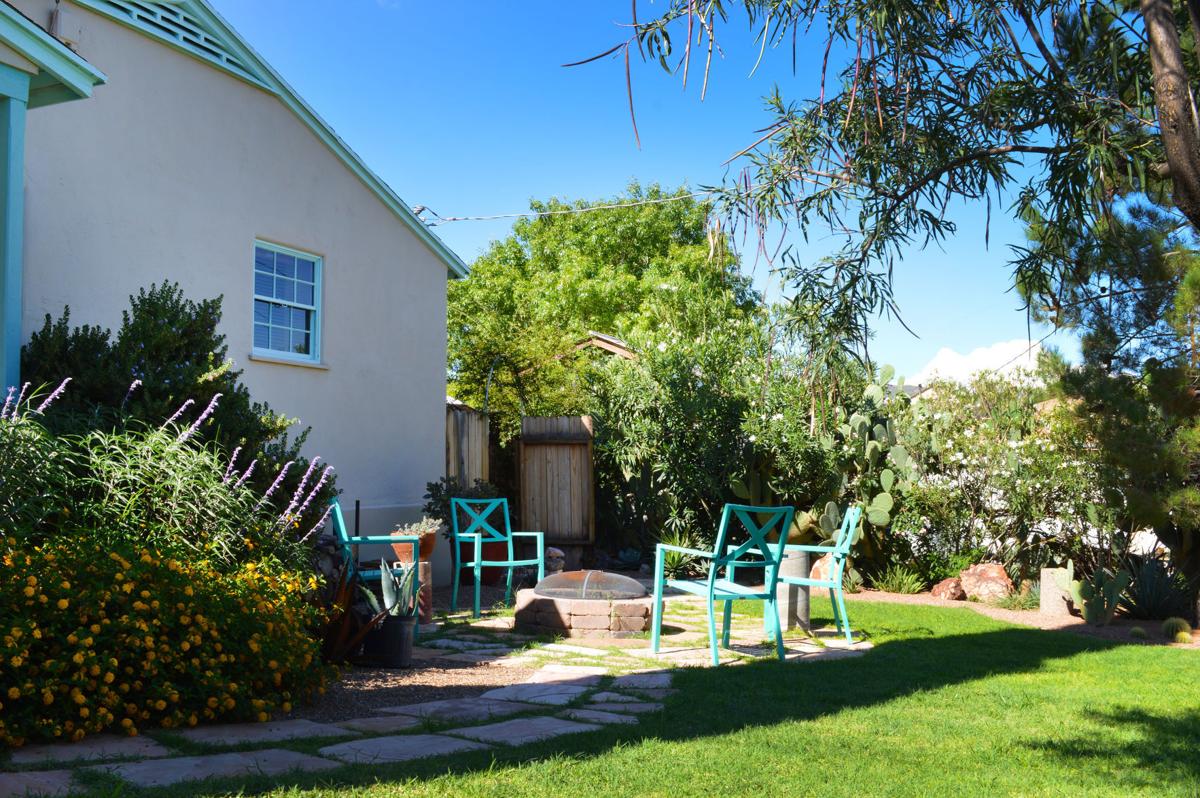 The winter garden at Jason Macoviak’s Bisbee home has a small flagstone patio that sports an in-ground brick fire pit surrounded by chairs. His home will be on the Bisbee Garden Tour. 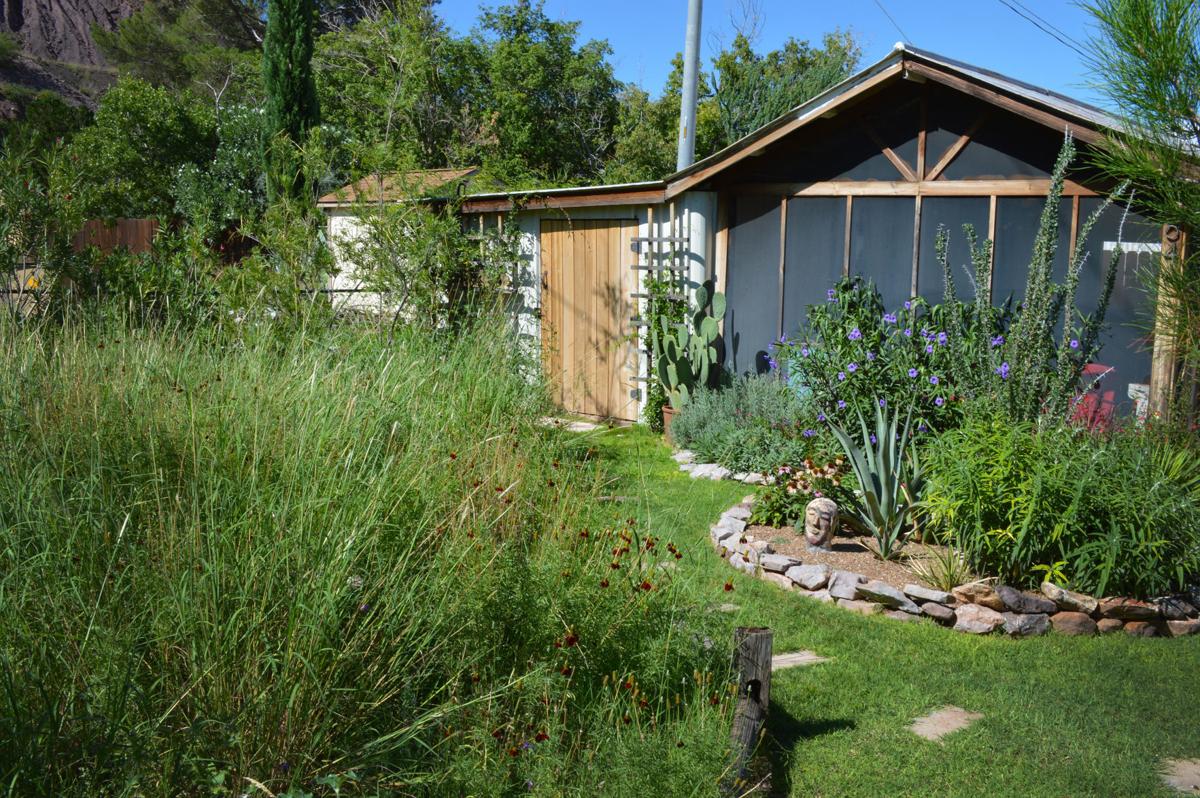 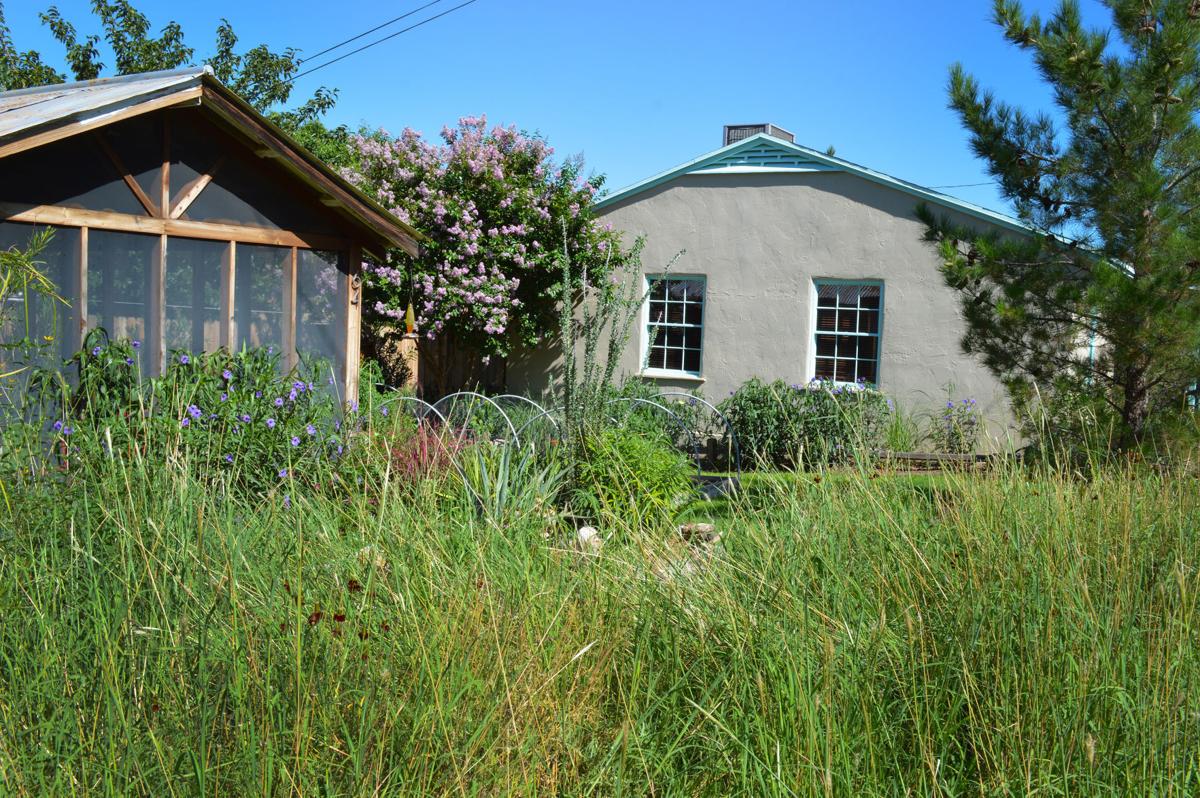 Jason Macoviak’s gardens will be one of eight stops on the 16th annual Bisbee Garden Tour on Sept. 2.

When Jason Macoviak talks about his summer garden or his winter garden, he’s not talking about a seasonal transformation of his Bisbee yard.

He’s talking about two separate spaces that thrive in opposite halves of the year.

“I’m originally from the East Coast, so I’m used to seasons,” says Macoviak, a manager at the Copper Queen Library who hails from the Philadelphia area.

He moved to Tucson because “I was looking at a magazine and saw a picture of a saguaro,” he says. “It looked so exotic to me that I said I have to go there.”

He also spent some time in Ajo. At both places the gardening enthusiast learned about desert gardening.

Then he landed a job in Bisbee. “Moving to Bisbee provided me the opportunity to enjoy the four seasons again,” he says.

Macoviak’s landscape is one of eight stops on the 16th annual Bisbee Garden Tour on Saturday, Sept. 2. It’s put on by the Bisbee Bloomers gardening club.

Visitors to Macoviak’s 1947 home in what he calls “the suburbs of Bisbee” will see how his gardens help him make the most of the seasons.

A focal point of the summer garden is a 200-square-foot corrugated shed that Macoviak converted into an enclosed patio. He replaced two walls with screening and added a dining table set in the space, which is bigger than his living room.

He enjoys sitting in the patio and listening to monsoon rain fall with a rattle on the metal roof. He often has summer dinners there, too.

The garden also has raised vegetable beds, where Macoviak grows tomatoes, peppers and cucumbers in the summer and cool-weather crops in the winter.

The garden provides edibles for other animals as well. Deer stop by to munch on the firethorn (pyracantha). Macoviak also has feeders to attract hummingbirds, orioles and finches.

But he’d rather watch the birds go for his wildflower beds in what he alternately calls his “no mow zone” and “meadow.”

In the summer it’s full of native grasses and blooming Mexican hat, bachelor button and a wide variety of other flowers he can’t identify. It’s definitely a bird attraction.

“One of the things I love is when they go for the natural stuff instead of the feeders,” he says.

In the fall he grooms the meadow by cutting down the grasses and some of the flowering plants. He also works to contain the wildness within the 8-inch fence. “If you’re growing inside that zone, you get to grow,” he says.

But he mostly leaves the beds alone. “What you want them to do is reseed because that’s the best way to get another flower,” he says.

The winter garden nurtures Macoviak’s obsession with agaves. “There’s a huge variety of them,” he says. They make up the majority of the succulent landscape that includes aloe and Indian fig cactus.

This side of the house, which gets full sun, also has desert willow, oleander, Afghan pine and crape myrtle. They all can handle the colder temperatures that Bisbee experiences compared to Tucson.

“I make sure I go lower (in cold hardiness temperatures) than what is expected,” Macoviak says. “I’m conscious of the freeze zone.”

He can enjoy the winter garden from a small flagstone patio that sports an in-ground brick fire pit surrounded by chairs.

Both sides of the landscape are visually tied together with a lawn, which is a typical landscape element in his neighborhood. Unlike the hillside residences of Old Bisbee, the town’s historic center, the homes in the Warren and Galena districts are on larger lots. That allows for some variety in gardens, Macoviak says. “People really enjoy seeing that part of Bisbee,” he says.

What: Self-guided tour of eight homes and business gardens.

Where: Generally the Warren and Galena districts in the outskirts of Bisbee.

Admission: $10.Tickets with maps are available before the event at High Desert Market and Finder’s Keepers and at the Vista Park farmer’s market on the day of the event.

• A home with an edible garden grown with harvested rainwater and compost made by the homeowner.

• Garden vignettes and gathering spaces around a home’s flagstone patios.

• A cottage garden with flowering perennials, roses and gnomes.

• High Desert Market Farm, which is 10 miles out of Bisbee, with a vegetable garden, cutting flower garden, trees, shrubs and potted plants.

More: Plein air painters and local musicians will add an artistic atmosphere to some of the stops.

This story initially listed the wrong date for the tour of the Liogue Senior Center's community garden. It will be held Sept. 23.

Traditions related to Yaqui agriculture will be in the spotlight during a Sept. 23 tour of the Liogue Senior Center’s community garden.

Visitors at the 9-10 a.m. event can see where seniors and volunteers grow common veggies along with about 100 gourds that are used in Yaqui ceremonies and crafts.

In the September Garden

In the September Garden

• Plant bulbs like rain lily and rhizomes such as iris. Divide iris beds.

• Pull weeds before they dry up and go to seed.

All events are free or included in the cost of admission unless otherwise noted.

UA bucket list: 50 things to check off before you graduate

This article is about where to drink in Bisbee. It's not about the dog

But he's a great model, right? Lil Magic over here wants to show you a great time in Brewery Gulch, where he's the resident mixologist. Here's…

This is Tucson's list of the best places to drink in Bisbee.

The Wildcats will debut a new team — and new threads — when they open their season Sept. 2 against NAU.

Here's a look at who the Wildcats will face this upcoming football season.

Fun night out grows in popularity throughout Tucson area

A trio of moms likes to occasionally take a break from family duties for a fun night out.

The winter garden at Jason Macoviak’s Bisbee home has a small flagstone patio that sports an in-ground brick fire pit surrounded by chairs. His home will be on the Bisbee Garden Tour.

Jason Macoviak’s gardens will be one of eight stops on the 16th annual Bisbee Garden Tour on Sept. 2.