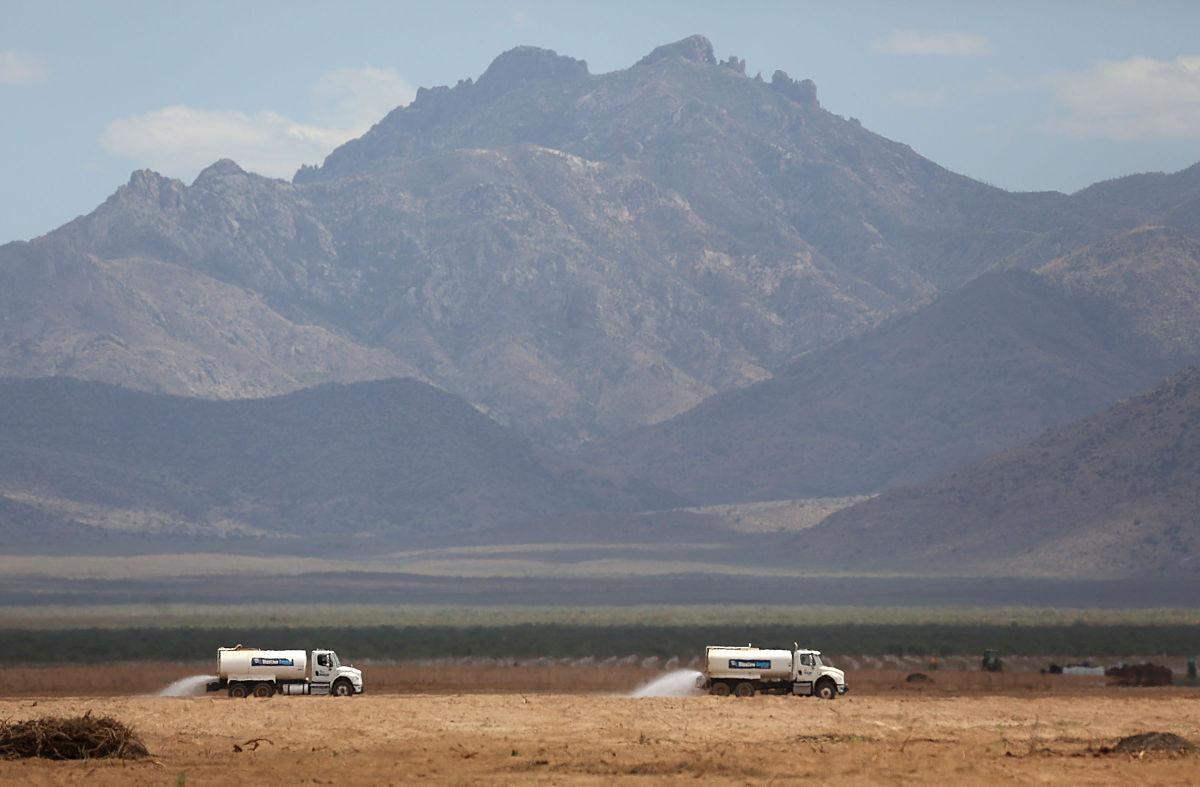 Trucks spray “gorilla snot” onto a field owned by David Turner along Interstate 10 near San Simon.

A water truck sprays water onto a field along I-10 near milepost 376, where blowing dust has closed the interstate. 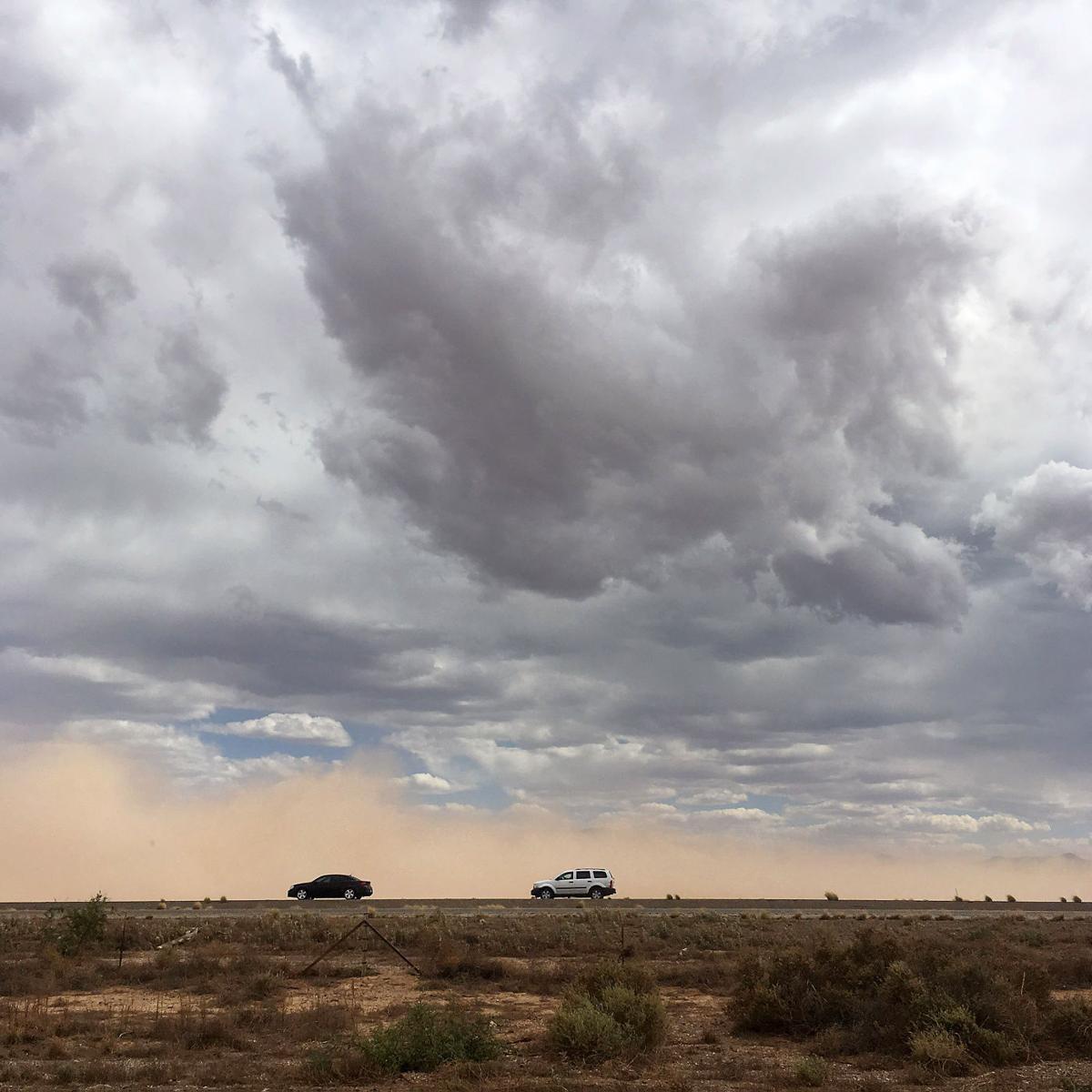 Dust from a nearby field kicks up as cars drive along I-10 near the San Simon exit.

Milepost 376 may be the safest spot on Interstate 10 these days.

Highway patrol and transportation workers watch for blowing dust on a plot of denuded land just west of San Simon whenever wind is forecast for the area, and they have been quick to close the highway down.

Crews hired by the Arizona Department of Environmental Quality worked this week to “glue” down that dust with a chemical known as “gorilla snot.”

In a consent agreement with the Arizona Department of Environmental Quality, the owner of the land, David R. Turner, has agreed to stabilize 320 acres of land nearest the interstate and water the remaining 300 acres until it is planted or forms a crust.

The agreement also requires a cover crop between rows of pistachio trees he plans to plant.

But while Turner’s farm is the most egregious example of disturbed land along Arizona’s interstates this spring, it is not the only area prone to “dust-channel events” that pop up quickly, especially along a stretch of highway near Picacho on I-10.

State and county officials are trying to build on a newfound interest in controlling dust along Arizona’s interstates to address other stretches of dusty land. One effort focuses on land along the interstate north of Picacho and south of Eloy.

A 2013 analysis of Arizona Department of Transportation records by the Arizona Daily Star found a two mile-stretch of the highway at mileposts 213 and 214 to be the deadliest point on the interstate, with eight people killed in more than 50 crashes since 2000, many of them dust-related.

Two months after that report was published, three more people died in a dust-caused crash at milepost 214.

The problem isn’t just at Picacho. An Arizona Department of Public Safety study reported 566 collisions and 14 fatalities on Arizona’s interstates from reduced visibility due to dust between 2008 and 2013.

Dust can obscure vision in almost any season in Arizona, but the danger is acute this time of year, with spring winds blowing over dusty desert that won’t be watered until the monsoon and its thunderstorms arrive in early July.

The problem is most acute where the land has been recently disturbed.

Don Gabrielson, who investigated the sources of dust-caused accidents during his time as director of the Pinal County Air Quality District, said the source is usually nearby.

“The dust events that suddenly make the lights go out, where all of a sudden you can’t see your hood ornament, are likely attributable to activities that disturbed surfaces alongside the highway,” he said.

You have two choices when trapped in sudden dust storms — both bad. You can slow down and hope the semi-truck behind you does the same, or maintain your speed and hope you bust through the dust cloud before you hit someone who has slowed or stopped in front of you.

Some truckers and motorists chose the wrong options during three windy days in San Simon in April. Multiple accidents on April 7, 25 and 28 involved 19 vehicles, including a Department of Public Safety squad car. Fortunately, nobody was killed.

In a sense, the havoc caused by David’s Agrigold Farms is easier to deal with than some others. The source of the dust was easily identified and remedies proposed, though they did not take hold immediately.

The Department of Environmental Quality, responding to citizen complaints, inspected the area and threatened fines, leading to the consent agreement. Ultimately, the state itself contracted for the application of the tackifier for about $200,000.

State authorities described the owners of the land as “new farmers” who weren’t aware of the best practices for controlling dust.

“The biggest problem is they stripped off too much ground all at once. They should have done it in 40-to-60 acre chunks,” said Mark Killian, director of the Arizona Department of Agriculture.

Killian said the area around San Simon has become a prime spot for growing pistachios and pecans and has attracted a number of farmers new to the area in recent years.

He said his department plans to send letters to agricultural land brokers in the region to urge consultation on best practices for controlling dust.

State Sen. Steve Farley, D-Tucson, suggested that the state Real Estate Department could add a disclosure requirement to land alongside the interstate that would outline the owners’ responsibility to control dust.

Farley was already working on the dust problem in Picacho after being caught in a deadly dust-storm crash there in October 2013.

He has been working with soil experts to devise mitigation, in a group that also includes Pinal County Supervisor Anthony Smith, whose district encompasses the area. Smith said their efforts have been slowed by changing ownership of the land in question.

Smith said much of the problem is land that was degraded long ago. He said a working group that includes the University of Arizona, the U.S. Department of Agriculture, ADOT and the weather service wants to “see if we could do something to mitigate the problem.” Killian said the state Agriculture Department has been asked to join the effort.

He and Farley are interested in a nearby piece of land where soil experts built berms and planted desert vegetation more than 40 years ago. Farley said the soil there seems to be holding.

Smith said he isn’t interested in new regulations to control dust, but would like to make solutions available to landowners.

Arizona has hundreds of thousands of acres of degraded desert that contribute dust to the giant storms. It’s an intractable problem that will worsen with drought and lowered water supplies, researchers said in a series of five annual dust-storm conferences organized by ADOT and the National Weather Service offices in Tucson and Phoenix.

The smaller, deadlier dust-channel storms with discrete sources along the state’s highways can be addressed, said Farley, who said he was encouraged by the actions of ADEQ in San Simon.

“I think there is enough public pressure now to do something,” he said.

Turner, meanwhile, has turned down repeated requests for comment. He issued a statement Thursday through his lawyer, Phillip Fargotstein of Fennemore Craig in Phoenix:

“My clients have been and are cooperating with the Arizona Department of Environmental Quality to solve the problem and have authorized the application of soil stabilization chemicals to the property to reduce the dust problem and they will continue to cooperate with ADEQ to take additional steps as needed.”

Turner signed the consent decree on behalf of David’s Agrigold Farms LLC, a limited-liability company with a Scottsdale address, Arizona Corporation Commission records show. In addition to David’s Agrigold farms, Turner is an agent/owner of a number of companies headquartered at two addresses in Scottsdale and Phoenix.

One is an agricultural commodities company, DTISW Inc., that has been in business in Arizona since 1993.

Another is David Turner International Ministries, which describes him as an “international businessman and healing evangelist.”

The website says the ministry is moving on June 1 to Buckhead, Georgia. Turner’s Scottsdale home is for sale for more than $2 million.

Mira Frenkel is a finalist in the Intel-sponsored "America's Greatest Makers."

Both the state office and university were surprised to learn of the consolidation.

Heat warning set this weekend in parts of Arizona

It could be 108 degrees this weekend in Tucson.

Letter: What to do in a dust storm

ADOT will place sensors, warning signs and reduced speed signals along a 10-mile stretch of Interstate 10 between Eloy and Picacho Peak.

Trucks spray “gorilla snot” onto a field owned by David Turner along Interstate 10 near San Simon.

A water truck sprays water onto a field along I-10 near milepost 376, where blowing dust has closed the interstate.

Dust from a nearby field kicks up as cars drive along I-10 near the San Simon exit.