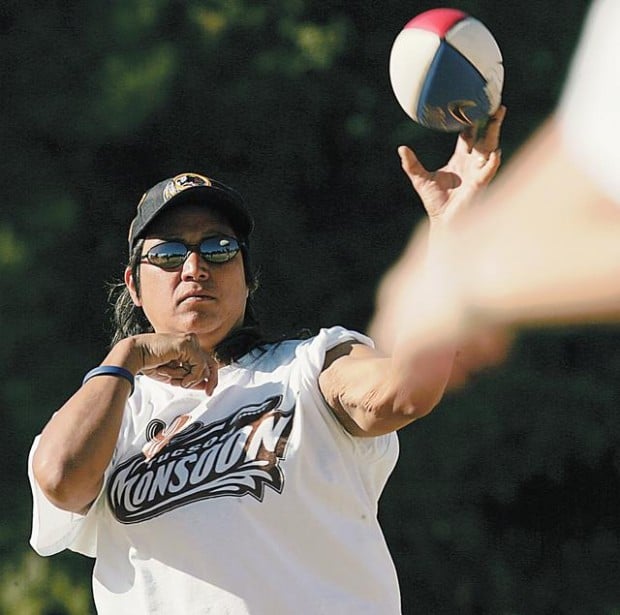 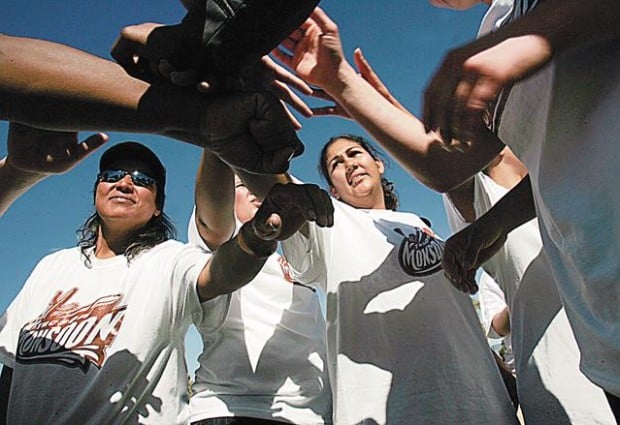 Move over, boys. The ladies are taking the field. So far, about 30 women have signed up to play for the Monsoon, Tucson's team in the Independent Women's Football League.

This is hard-hitting, tackle football — none of that wimpy flag stuff.

Rodriguez played in the IWFL's inaugural year in Tucson last year for the Tucson Wildfire team, which since has switched leagues. She even suffered an ankle injury when someone rolled over her ankle during a tackle.

"It's a hairline fracture. It's small," Rodriguez said. She's not letting it get in her way for this season.

"It's so exciting. The adrenaline gets going and it's not like anything I've experienced before," Rodriguez said.

"I don't think this is something that would've existed 20 years ago. I don't think anyone would've had the guts to start this then," said the former softball and Pop Warner football player.

The IWFL was founded in 2000 and now has 31 teams across North America, including in Montreal, Connecticut, Oregon, California and Florida.

The IWFL came to Tucson last season, when the team was named the Tucson Wildfire. That team is no longer in the league; it now is in the National Women's Football Association. The Monsoon, owned by a player, Kristie Godbout, and her husband, Robert Godbout, has taken its place in the IWFL.

The Monsoon's five coaches are all men, with some of them husbands and relatives of the players.

Right now the team is going through tryouts, and more women are welcome — no experience necessary. But be prepared for a hard workout. At tryouts, the whole team goes through conditioning drills, including high knees, side steps, backpedals, bear crawls and sprints — or "gassers." At the end of the two- to three-hour session, most are huffing and puffing and ready for a break. Rodriguez, who played last year but didn't work out much this summer, couldn't walk for a few days after tryouts.

Everyone who tries out is accepted. The team's goal is to have enough players to have a competitive team and a developmental team to hone players' skills.

When the team is ready to play it'll be prepared for 15-minute quarters, which add up to about a three-hour game, just like men's football.

Marissa Murrieta is playing tackle football for the first time in her life this year. She's been to just two workout sessions but already notices that she's in better shape.

Murrieta doesn't think that playing will be any physically tougher than her days of high school basketball and softball, but she does think the game will be more mentally challenging.

"You can't just get any woman off the street to play — you have to mentally prepare for it," said the 27-year-old. "And you don't even have to be a bigger person to play. You can do just as well being a smaller person."

So just what is the difference between women's tackle football and men's football?

Not much, at least as far as the rules go.

Sure, there's no chop-blocking (blocking below the waist.)

And the center can't get hit until the ball is snapped and she has her head up.

The only big difference between this game and a men's game, players said, is the team dynamic.

"It's really different than men's sports because we end up being about relationships. It's about making friendships," said Kristie Godbout, the owner. She played last year on the Tucson Wildfire team, but she's still deciding if she's going to take the field this year.

"You'll see that we're a lot more protective of each other out there on the field than men are. For men, it's more about individual achievement," said Lupe Chavez, who played last year and is doing the team's publicity this year.

In January, the team workouts begin and players will get their pads, which make the workouts more strenuous. They'll practice three times a week until April, when regular-season games begin.

The team will play six regular-season games, and the season will end in late June.

"I can't wait. I'm so ready for this," said Rodriguez, the quarterback.

● Practices begin in January, but it's not too late to join the team.

If you're interested in joining, contact Kristie Godbout, owner and general manager, at 551-2808 or e-mail monsoonseason@ gmail.com.

For more information on the league, visit www.iwflsports.com online.

The player fees might seem daunting, but the team holds fund-raisers to make sure every woman who wants to play can pay the fees.

Last year, the team raised $6,000 in one week to help players afford to play.

"Don't let the cost keep you from playing," said Godbout.

Equipment also can be rented for $125 per season.