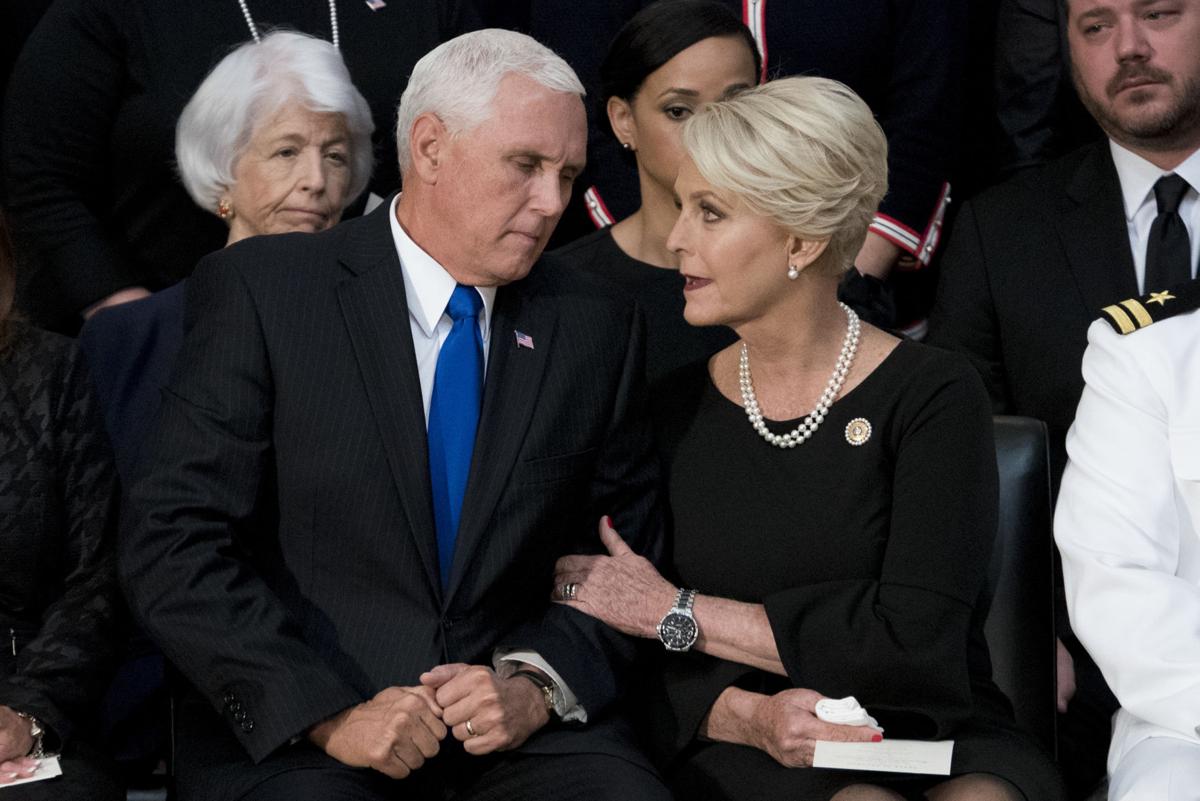 Cindy McCain, wife of Sen. John McCain, R-Ariz., right, talks with Vice President Mike Pence, left, after he speaks at a ceremony for John McCain as he lies in state in the Rotunda of the U.S. Capitol, Friday, Aug. 31, 2018, in Washington. 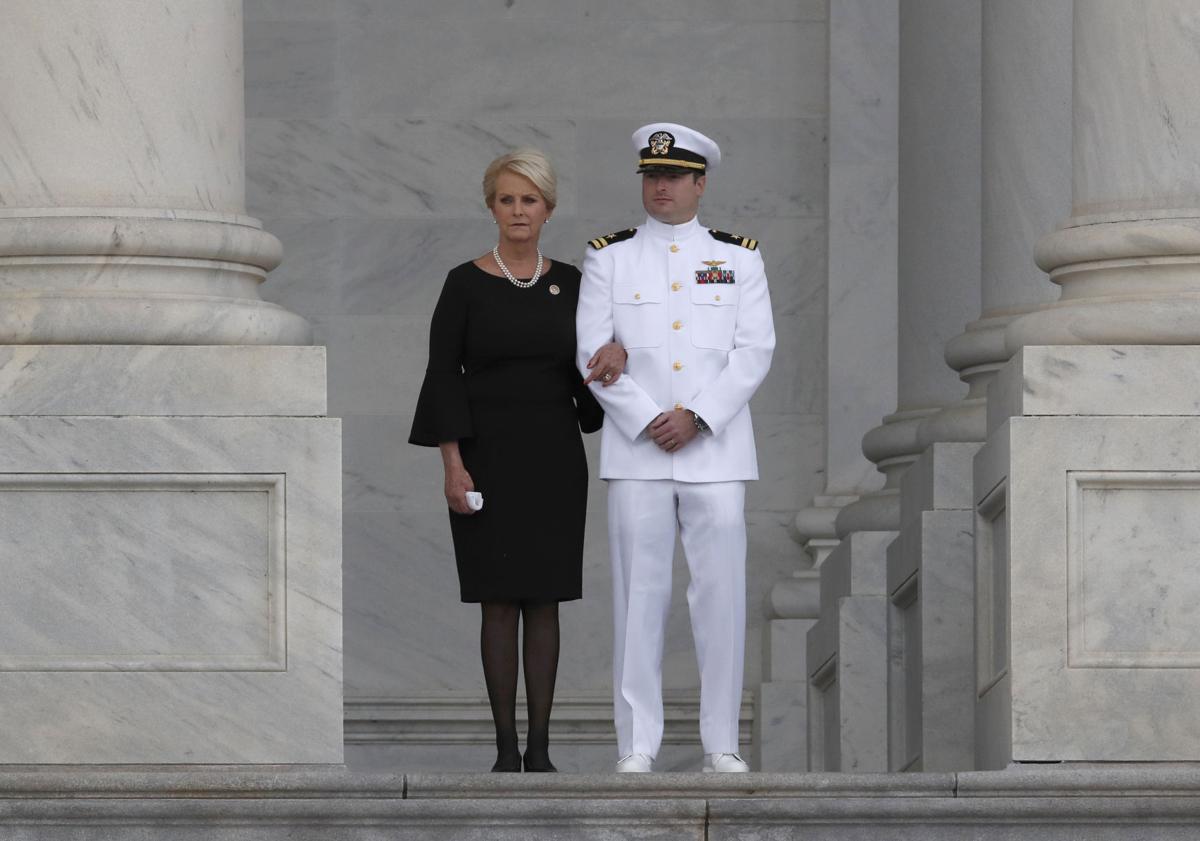 Cindy McCain, stands with her son Navy Lt. Jack McCain, before the casket of Sen. John McCain, R-Ariz., is carried up the steps to lie in state in the Rotunda of the U.S. Capitol, Friday, Aug. 31, 2018, in Washington. (AP Photo/Alex Brandon)

WASHINGTON — Congressional leaders saluted John McCain Friday as a model of service in war and peace, "one of the bravest souls our nation has ever produced," in a memorial ceremony at the heart of the political battlefield where he fought for more than three decades.

Then thousands of fellow Americans, who had lined up outside the U.S. Capitol in stifling heat, began filing past in the majestic rotunda to say goodbye as he lay in state.

McCain, the Arizona senator who died Saturday at 81, was remembered as a man who inspired other leaders even as he vexed them with a rebellious streak and impish humor. Absent from the event was Donald Trump, invited to stay away by the family of the senator, who had deep disagreements with the president.

McCain's service in Vietnam, and his refusal to be released early as a prisoner of war, made the setting of Friday's service all the more fitting, some said.

"Half a world away, wearing our nation's uniform, John McCain stood up for every value that this Capitol Building represents," Senate Majority Leader Mitch McConnell told the crowd of McCain's family, friends and aides. "Then, he brought that same patriotism inside its walls -- to advocate for our service members, our veterans and our moral leadership in the world. So it is only right that today, near the end of his long journey, John lies here."

Friday's ceremony and public viewing was the midpoint of McCain's five-day cross-country funeral procession from Arizona, where he and wife Cindy raised their family, through the Capitol where he worked for more than 35 years, to the U.S. Naval Academy cemetery in Annapolis, Maryland — "back where it began," as he wrote in his recent memoir, "The Restless Wave." On Saturday, the procession will pause by the Vietnam Veterans Memorial on the way to a formal funeral service at Washington National Cathedral.

In Trump's absence, Vice President Mike Pence, Defense Secretary James Mattis, White House Chief of Staff John Kelly and other officials represented the administration. Pence at one point said that Trump, who mocked McCain for being captured, "respected his service to the country."

The stop at the Capitol was designed to spotlight McCain's outsized role in an institution bursting with big, willful personalities. Just to the north of the rotunda in the semi-darkened Senate, McCain's desk remained draped in black and topped with a vase of white roses.

After the ceremony, Cindy McCain quietly sat behind her husband's desk, escorted by his seatmate and close friend, Sen. Lindsey Graham. Graham plucked two of the roses from the vase and gave them to her during that private moment, said two people close to McCain and his family.

Of those who spoke at Friday's ceremony, fellow Republican McConnell had perhaps the fullest sense of the McCain experience. The two had served in the Senate together since McCain's 1986 election.

"Depending on the issue, you knew John would either be your staunchest ally or your most stubborn opponent," McConnell recalled. "At any moment, he might be preparing an eloquent reflection on human liberty — or a devastating joke, served up with his signature cackle and that John McCain glint in his eye."

But just about anyone who worked in the Capitol over the past 35 years could attest to McCain's iron will and what House Speaker Paul Ryan called his "distinct brand of candor."

"With John, it was never feigned disagreement. The man didn't feign anything," Ryan said. "He just relished the fight."

"This," Ryan added of McCain, "is one of the bravest souls our nation has ever produced."

Pence, himself a former senator, recalled traveling through Iraq with McCain and falling asleep during a dinner with officials. McCain, nearly 23 years older, told him, "'Mike, we've got a few more meetings tonight. But why don't you turn in. You look like you could use some rest,." Members of McCain's family, seated nearby, smiled.

Cindy McCain was the first to pay respects at her husband's casket. She bowed over it and appeared to pray. The last of the family to file past was his mother, 106-year-old Roberta McCain. Wheeled up to her son's flag-draped casket, she crossed herself and was wheeled out.

Sen. Jack Reed, the ranking Democrat on the Senate Armed Services Committee that McCain chaired, crossed himself in front of the casket. Then he waited for retired Sens. Carl Levin, a Democrat, and John Warner, a Republican, both of whom chaired the powerful committee at one time. The three left the rotunda arm-in-arm.

As the service ended, thousands of people were guided into snaking lines along First Street on the border of the Capitol complex to pay respects to McCain.

Among them were more than 100 family members of Vietnamese political prisoners who traveled to Washington to honor McCain for his advocacy for Vietnamese refugees..

Khuc Minh Tho, president of the Families of Vietnamese Political Prisoners Association, said that with McCain's help, almost 800,000 prisoners and their families who were in Vietnam are now in the U.S.

"We respect him and want to wish that he rests in peace," she said.

Sibyl Kalish, 59, traveled with her 89-year-old mother, Beverly, from New York and waited in the blistering heat to file past McCain's coffin. They are from a liberal, military family, Kalish said.

"I respect him for what he gave for this country. He tried his best. I'd like to see more people like him," Beverly Kalish said.

Doing so would dishonor McCain, and the voters who elected him.

The U.S. State Department has issued a travel advisory for its employees and  U.S. citizens to reconsider their travels to Sonora, Mexico.

The distributor is seeing much growth in cross-border trade.

A legal challenge to the selection of a new shuttle operator has delayed the transition.

Was recently found in civil contempt for defying a string of previous court orders to cease the unauthorized practice of law.

A woman who was airlifted to a hospital with serious injuries from a two-vehicle collision on Aug. 31, on Houghton Road near I-10, has died, a…

Popular falls near Grand Canyon to reopen after flooding

FLAGSTAFF — An Arizona canyon that's world famous for its blue-green waterfalls is reopening Saturday, weeks after flooding closed it to touri…

Southbound Thornydale Road at Costco Drive is down to one lane after a crash in the area, according to the Marana Police Department.

MESA — A former Marine told authorities he kept a cache of more than 40 pipe bombs in his Arizona home to please his wife, who believed they w…

Cindy McCain, wife of Sen. John McCain, R-Ariz., right, talks with Vice President Mike Pence, left, after he speaks at a ceremony for John McCain as he lies in state in the Rotunda of the U.S. Capitol, Friday, Aug. 31, 2018, in Washington.

Cindy McCain, stands with her son Navy Lt. Jack McCain, before the casket of Sen. John McCain, R-Ariz., is carried up the steps to lie in state in the Rotunda of the U.S. Capitol, Friday, Aug. 31, 2018, in Washington. (AP Photo/Alex Brandon)