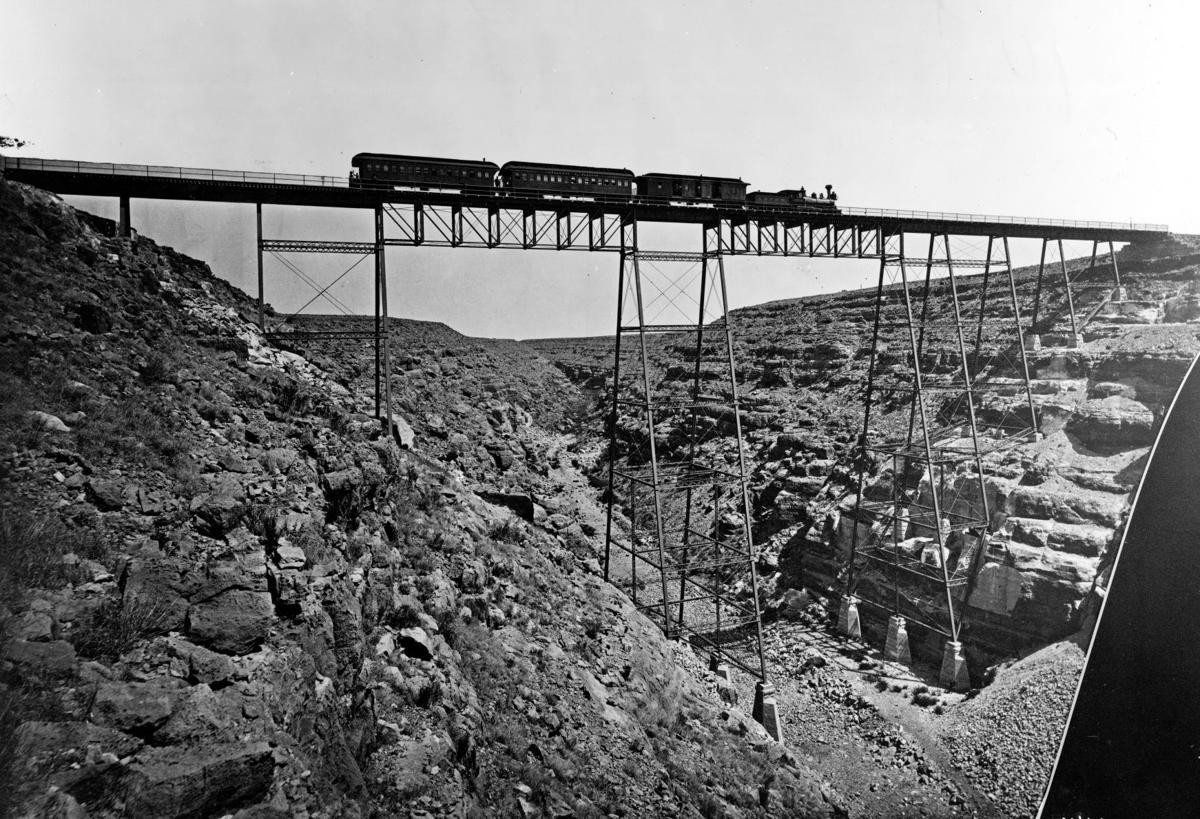 An early image of the Canyon Diablo bridge shows its light-timbered appearance. Trains, like this Atlantic and Pacific Railroad Co. engine, had to cross it slowly. 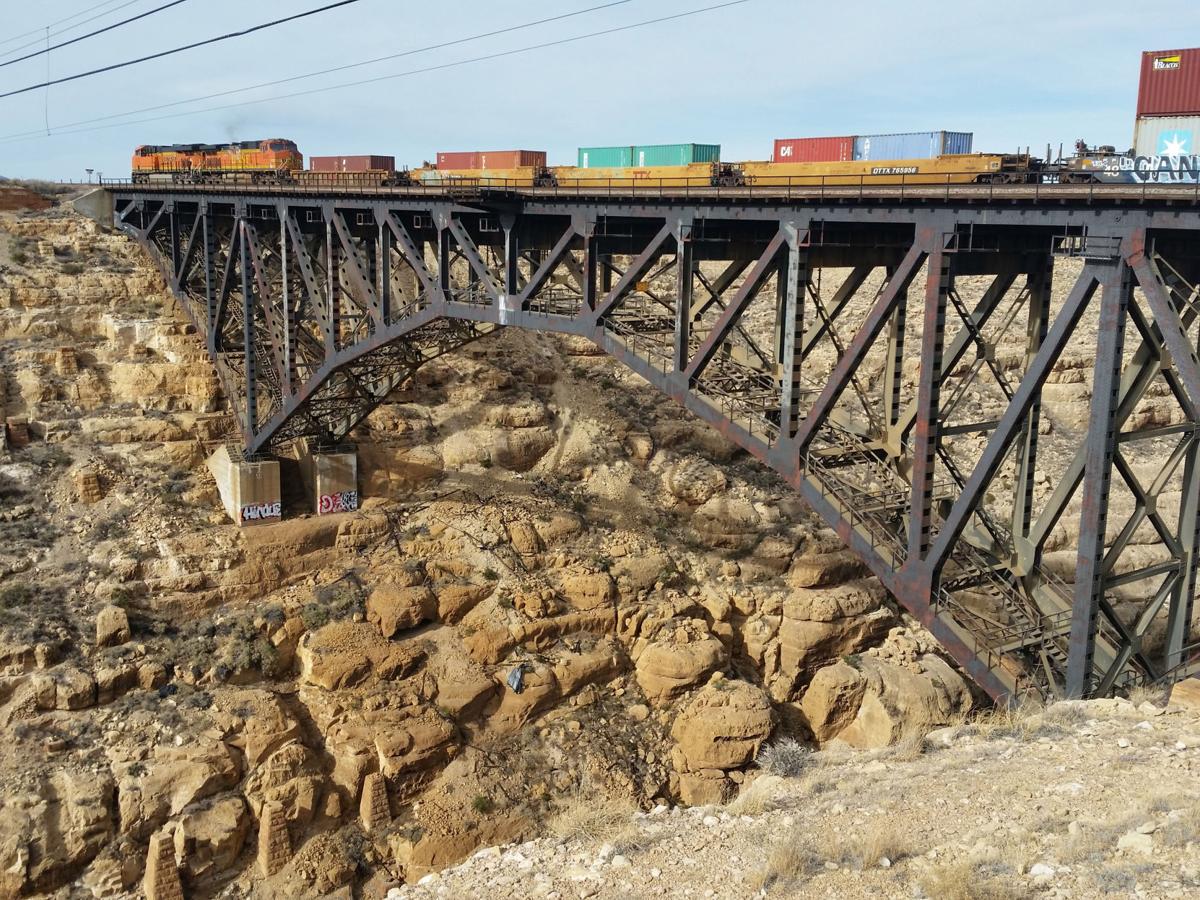 The double-track, steel-arch bridge seen today at Canyon Diablo is 544 feet in length with an arch of 300 feet. 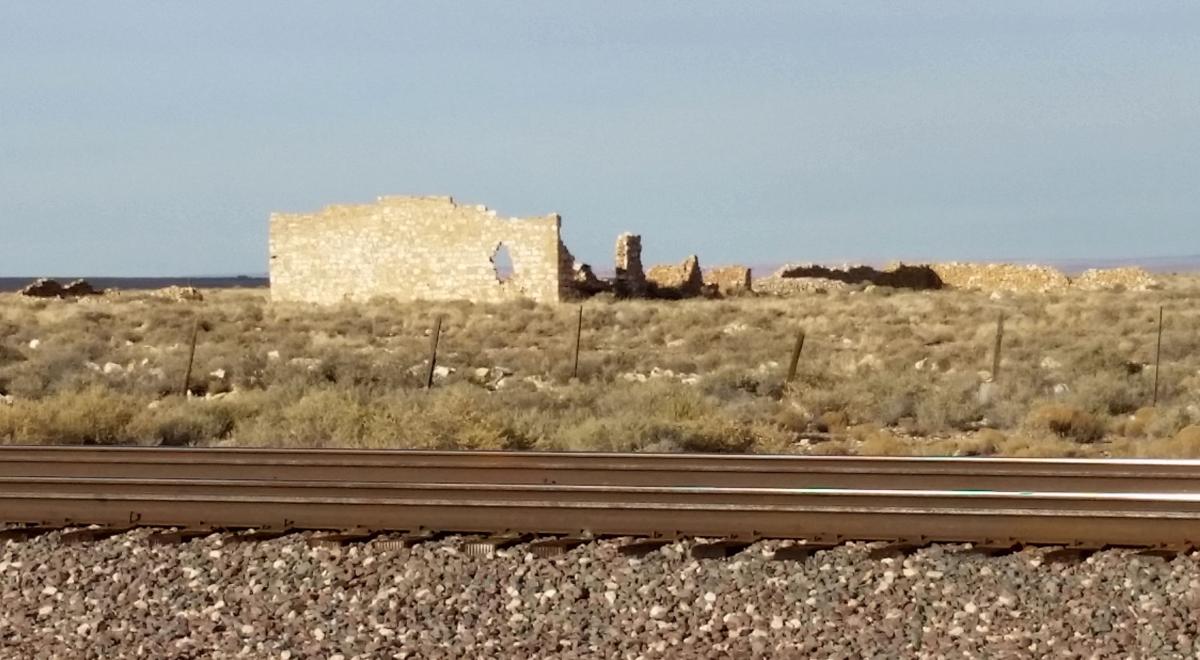 The last standing remnant of the old trading post at Canyon Diablo just north of the railroad track. 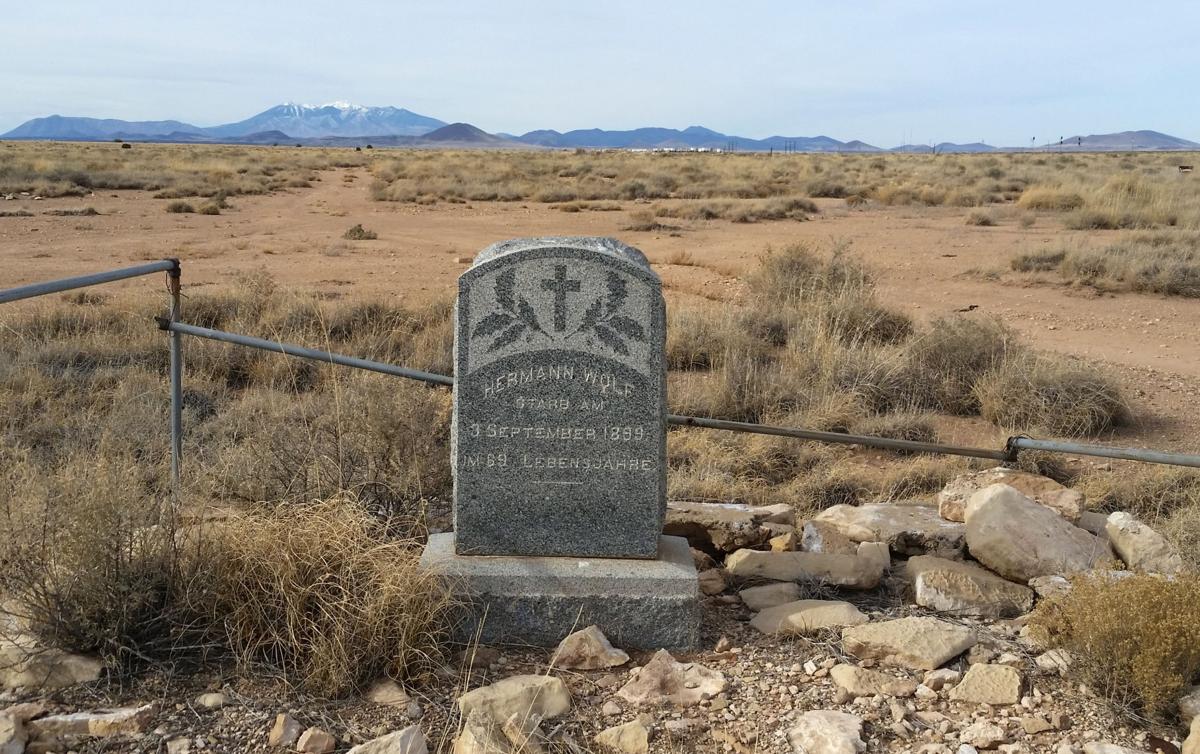 This gravestone marked the burial site of Herman Wolf, a proprietor of one of the trading posts at Canyon Diablo.

Canyon Diablo, an anglicized version of the Spanish word for “Devil’s Canyon,” is a well-known and formidable deep gorge surrounded by flat land in Kaibab limestone that halted the construction of the Atlantic Pacific Railroad for six months in 1881.

Located 35 miles east of the San Francisco Peaks just north of Flagstaff, the canyon was surveyed and named in 1853 by Army Lt. Amiel W. Whipple, who was exploring the topography of the 35th parallel for the feasibility of building a railroad across northern Arizona.

The need for rail transport became apparent with the opening of mining camps in Mojave County in the late 1870s. Those included Cerbat, Hackberry, Mineral Park, Signal and White Hills mining operations.

The A&P’s route connected Springfield, Missouri to California through Texas, New Mexico and Arizona. Kingman served as the railhead along the A&P for many of these nearby mines.

The A&P was the closest major railway for mining operations around Prescott, notably in the Bradshaw Mountains. The railroad served as the primary method of ore transport especially for mines with contracts at smelters operated by the Pueblo Smelting and Refining Co. of Colorado or the Rio Grande Smelting Co. of Socorro, New Mexico.

Three notable bridges were built for the railroad at Canyon Diablo. The first in 1881 consisted of a one track width(iron). Provisions, including water, were hauled by wagon from Navajo Springs 100 miles to the east.

During the summer of 1881, stone cutters were requisitioned from as far as Chicago and St. Louis, crafting local rock into the bridge-tower footing or pylons still evident today.

The small ephemeral settlement of Canyon Diablo was built to serve the railroad.

Consisting of a nearby telegraph office it was notorious for a number of gun fights and robberies. It also served as a shipping point for wool from local sheep herders.

Iron used in the construction of this edifice was manufactured by the Central Bridge Works in Buffalo, New York. It required 20 railcars to transport the structure in October 1881. The bridge came up several feet short causing the need to import more material necessary for completion.

The first trains to pass over the canyon occurred on July 1, 1882. The bridge measured 550 feet, crossing over a 225-foot-deep basin.

Finishing touches in the weeks that followed included the addition of a wood floor laid across the bridge, the installation of substantial iron railing and the removal of the scaffolding.

No doubt intimidating was the first bridge’s light timbered appearance. The maximum speed of the passenger cars across its rails was four miles per hour, 20 mph less than the standard maximum.

The site was also the scene of the infamous train robbery that occurred at Canyon Diablo station in 1889. An eastbound passenger train had stopped to lubricate the driving mechanism of the locomotive when a group of four men with six-shooters held up their travels. The bandits made off with $800, leaving a safe containing $125,000 behind.

The bandits were eventually captured southeast of Beaver, Utah by a small posse led by the sheriff of Yavapai County.

The A&P was acquired by the Atchison, Topeka and Santa Fe Railway Co. in 1897.

By 1900, the bridge was replaced with a structure of more sturdy manufacture to handle the greater weight of locomotives and rail cars.

Herman Wolf was a proprietor of one of the trading posts at Canyon Diablo. The spelling was changed from Cañon Diablo to Canyon Diablo by the Santa Fe Railway in 1902.

Constructed under the oversight of System Bridge Engineer Clifford Sandberg, the double-track, steel-arch bridge seen today was completed in 1947. Its length is 544 feet while its arch measures 300 feet.

The bridge is heavily used today by trains averaging 50 mph.

Both the bridge and nearby Canyon Diablo settlement remnants are accessible by a three mile rough dirt road north of Two Guns, off Interstate 40.

His other books are “Chiricahua Mountains: History and Nature,” “Southeastern Arizona Mining Towns,” “Zenith on the Horizon: An Encyclopedic Look at the Tucson Mountains from A to Z,” “Tucson Mountains,” “Arizona-Sonora Desert Museum” with Peggy Larson and “Sentinel to the North: Exploring the Tortolita Mountains.” Email Ascarza at

Mine tales: There's gold, silver and copper in those Arizona hills

Here are 15 stories detailing Arizona's mineral riches that have been and are being mined.

Mine Tales: Jerome's "crookedness" railroad dates back to 1894

The first railroad in Jerome, a premier Arizona copper mining town with billion dollar views, was the United Verde and Pacific Railway charter…

Mine Tales: San Xavier-area mine now a UA teaching lab

Mine Tales: Claim date gave Arizona's Christmas Mine its name

Dennis O’Brien and William Tweed located the Christmas Mine about 1880 and sold their claims to Phelps Dodge shortly thereafter. Yet the mine …

Mine Tales: Activity intensified around Mammoth in the late 1800s

An early image of the Canyon Diablo bridge shows its light-timbered appearance. Trains, like this Atlantic and Pacific Railroad Co. engine, had to cross it slowly.

The double-track, steel-arch bridge seen today at Canyon Diablo is 544 feet in length with an arch of 300 feet.

The last standing remnant of the old trading post at Canyon Diablo just north of the railroad track.

This gravestone marked the burial site of Herman Wolf, a proprietor of one of the trading posts at Canyon Diablo.