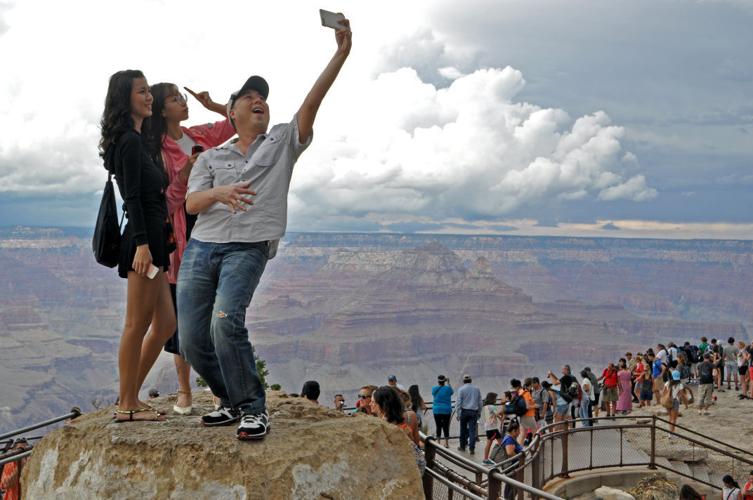 Since the start of the year, visitation has been up about 25 percent over last year at Grand Canyon National Park in Northern Arizona. 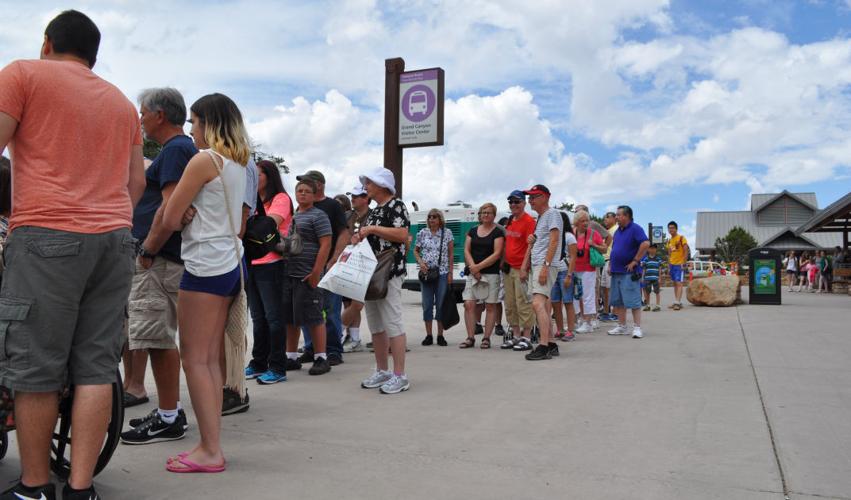 A surge in visitation at the Grand Canyon has led to amusement park-like lines and waits of up 45 minutes for a shuttle. 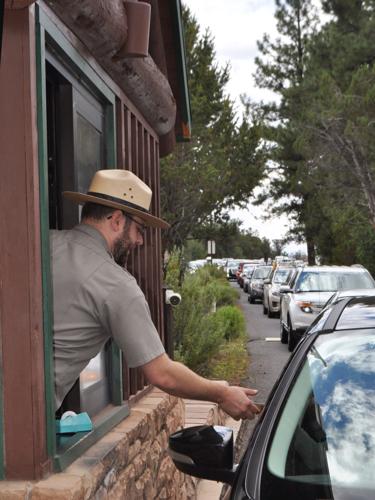 Nate Powell staffs one of the entrance stations at the Grand Canyon’s South Rim. 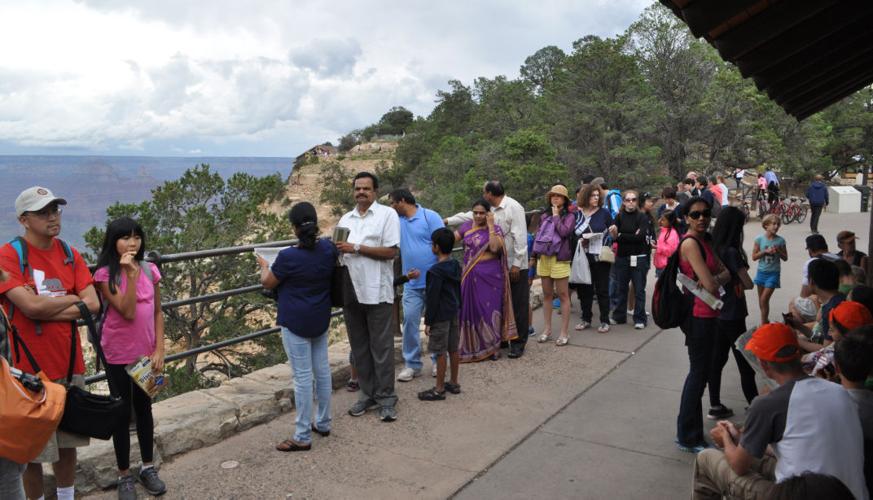 The wait at the shuttle stop for the popular Hermits Road route topped 45 minutes on a recent afternoon. 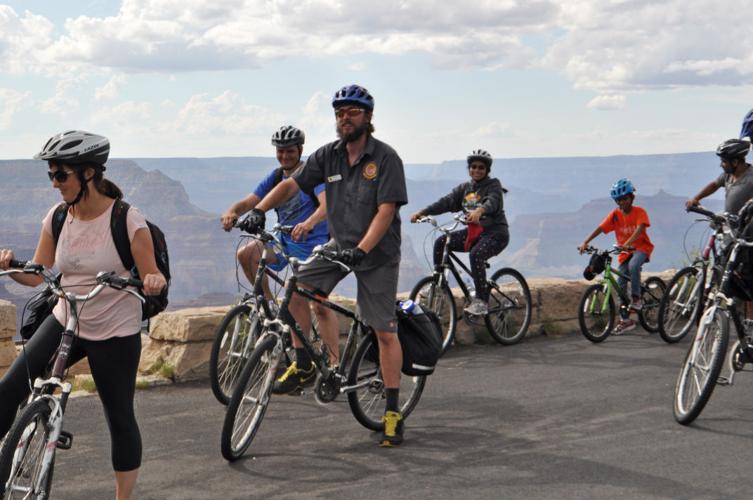 Matt Heslep, center, leads a tour with Bright Angel Bicycles, which has seen a four-fold increase in business since 2010. 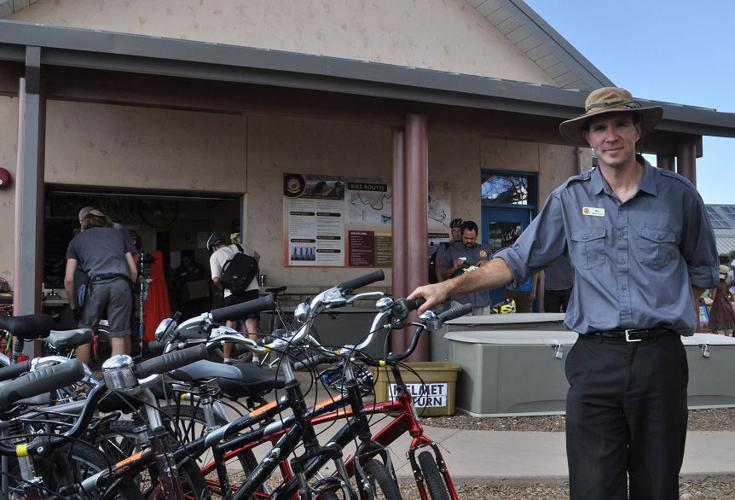 Wes Neal, co-founder of Bright Angel Bicycles, stands in front of the business’s cafe and bike shop at the South Rim of Grand Canyon National Park. After starting five years ago the shop has seen a more than four-fold increase in business.

GRAND CANYON NATIONAL PARK — It was only mid-morning and the line of cars backed up at the entrance to Grand Canyon National Park made for a 30-minute wait. Nate Powell leaned out the window of the park’s entrance station and, in a voice that was endlessly upbeat, greeted car after car packed with travelers from California, Brazil, Germany and beyond.

Maps and passports in hand, the visitors spilled a steady stream of questions. “Is there a Visitor Center?” “Where are the better places to park?” “Is there a specific area for dogs?”

Powell answered them all, again and again, sending the cars off with a cheery, “Welcome to Grand Canyon.”

At one of the nation’s most visited national parks, crowds, lines and parking hassles are nothing new. But this year, the park, straining under a backlog of maintenance and understaffing, is facing an even larger crush of crowds.

Since the start of the year, visitation has been up about 25 percent over last year. For a park that sees 4.5 million visitors annually, that translates into an additional 250,000 cars coming through the park’s gates so far this year, said Marlon Avantyr, revenue and fee business manager at Grand Canyon National Park. By comparison, last year’s record visitation was up just 4 percent from the year before.

The ripple effects are many, both for visitors and for park employees striving to give visitors the experience of a lifetime.

There are the traffic backups at entry stations, the long lines at shuttle stops and parking lots filled to the brim. But there’s also more trash in parking lots, more people flushing toilets and more tourists shuffling through the visitors center, impacts that fall on employees’ shoulders.

“I’m predicting that total numbers for this year will be through the roof,” Avantyr said. “But we just figure out a way to manage it. That’s what we do.”

Park managers pointed to a confluence of factors creating the swell of visitors this year. The National Park Service is ramping up an advertising push on its “Find Your Parks” campaign, meant to appeal to millennials, and has also increased promotions in Europe. Next year is the centennial of the National Park Service, which has put more attention on national parks, said Kirby-Lynn Shedlowski, spokeswoman for the park. On top of that, a series of mild winters has spurred more people to visit the Grand Canyon earlier in the year while gas prices below $3 make a road trip to northern Arizona more affordable, Avantyr said.

Backup at the canyon

Beneath a sky punctuated with puffy white clouds, cars slowly rolled up to the Grand Canyon National Park South Rim entrance gate on a recent weekend. As they received their maps and park pass, drivers said the wait to that point had been anywhere from 10 minutes to 30.

The entrance station crew has been short staffed, but with such a surge of visitors, Avantyr said he’s had little choice but to add shifts and pay overtime to keep the entrance gate running.

Visitors’ next challenge is to wind through the park to find a parking spot, which has become such a challenge that some RVs just decided to turn around and ask for a refund because they couldn’t find a place to park, Avantyr said.

Jackie Kull said her group, which had made the trip from South Carolina, had to circle multiple times before finding a parking spot.

“We had to park way over yonder,” Kull said, pointing into the distance.

From beside Kull, one of her traveling partners, Bobby Crain, piped up.

“When I was here before, you parked right at the rim and walked,” Crain said as their group waited for the buses that would shuttle them along the South Rim.

The canyon’s shuttle system, which began in the 1970s, saves the park’s one-lane roads from becoming a clogged, traffic-congested mess, said Pam Edwards, transportation program manager at the park. But the system is facing its own challenges to accommodate the increase in visitors that end up forming long lines at bus stops. With boardings up 10 percent over last year, Edwards said she is constantly trying to figure out how to best distribute the growing number of visitors over the 13-mile stretch of the South Rim using a bus system that is at maximum capacity.

One solution has been the 2009 addition of a route from parking lots in Tusayan outside the park to the park visitor center. The route has seen a 70 percent increase in boardings over last year, Edwards said.

But for people inside the park, amusement park-long lines still form at popular hubs, especially the beginning of the Hermit Road route that heads out to the viewpoints west of the Bright Angel Lodge.

On a Sunday afternoon the wait for a shuttle topped 45 minutes.

Though that number may make locals cringe, for people coming from half a world or thousands of miles away, the lines are a small price to pay to see one of the world’s greatest natural wonders.

The park itself has received few complaints about the crowds, Shedlowski said.

“Sometimes you may get a letter about the shuttle buses being crowded, but in general we’ve never gotten letter saying ‘Mather Point was too crowded, we couldn’t see the canyon,’” she said.

Strain on the system

As the number of visitors at the park surges, a perhaps less obvious impact is the stress on systems that handle things like people’s trash and their visits to the restroom. So far, the park’s waste-disposal services have been struggling to keep up, said Howard Gourley, the park’s custodial and solid waste supervisor. Already the amount of trash produced is putting the park on track to exceed its annual 3,500-ton average by 300 tons. Parking lots are becoming littered with trash more quickly than in years past, forcing cleanup crews who were picking up parking lots two times per week to sweep over them daily, said Scott Rommel, custodial supervisor.

Toilet paper consumption is up 25 percent this year and the department had to install additional toilet paper dispensers in each restroom stall to make sure there’s enough to last between cleanings, Rommel said.

The heaviest-use restrooms go through more than a mile of toilet paper each day, he said.

While the canyon view rightfully takes center stage, it’s hard work behind the scenes to keep it that way, Gourley said.

“Our goal is when (visitors) come in the gate, the only memory we want them to have is the first time they see the Grand Canyon,” he said. “Unfortunately we’ve been overwhelmed this year with litter and parking issues.”

Grand Canyon National Park also faces $329.5 million in deferred maintenance, but most of those improvements need to happen regardless of how many visitors stream through the gates, Shedlowski said. Replacement of the trans-canyon pipeline and road improvements, the two biggest-money items, both fall into that category, she said.

While canyon officials agreed that a rise in visitors can pose its challenges, the concept of capping visitation to such an iconic place was clearly a topic they couldn’t, and wouldn’t, touch.

“I cannot see that as being realistic, how can you deny people getting into a national park?” Avantyr said. “There are people that come here from the other side of the planet and have been planning this trip for years.”

Instead, it’s up to the park to come up with creative ways to manage that volume, he said.

On September 6, Pima County Sheriff deputies responded to the reports of a hit and run collision, involving a sedan and a pickup truck in the parking lot of Trident IV.

Mary Jacobs, who served as town manager since 2017, submitted her resignation on Sept. 23.

On Aug. 25, a 49-year-old was shot and killed by officers after SWAT conducted surveillance on him at a Circle K.

Woman killed in crash with semi south of Tucson

The driver reportedly crossed into the path of an oncoming semi-truck, officials say.

Tucson City Council is due to vote on the proposals at its Oct. 18 meeting.

Clements will receive at least 35 years to life behind bars when he is sentenced.

Download our guide to 12 Tucson taco spots on 12th Avenue

To celebrate some of our favorite food in Tucson, we put together a very handy guide to 12 taco spots found along South 12th Avenue, available for Arizona Daily Star subscribers!

For Star subscribers: A federal judge has blocked the state from enforcing a new law that he said could inadvertently make felons out of volunteers who register people to vote.

California authorities say an abducted 15-year-old girl and her father — a fugitive wanted in the death of the teen’s mother — were killed in a shootout with law enforcement.

The powerful storm, which will be one of the costliest hurricanes ever to hit the U.S., has terrorized people for much of the week. Plus, our weather podcast's experts explain why hurricane season is taking off.

Since the start of the year, visitation has been up about 25 percent over last year at Grand Canyon National Park in Northern Arizona.

A surge in visitation at the Grand Canyon has led to amusement park-like lines and waits of up 45 minutes for a shuttle.

Nate Powell staffs one of the entrance stations at the Grand Canyon’s South Rim.

The wait at the shuttle stop for the popular Hermits Road route topped 45 minutes on a recent afternoon.

Matt Heslep, center, leads a tour with Bright Angel Bicycles, which has seen a four-fold increase in business since 2010.

Wes Neal, co-founder of Bright Angel Bicycles, stands in front of the business’s cafe and bike shop at the South Rim of Grand Canyon National Park. After starting five years ago the shop has seen a more than four-fold increase in business.