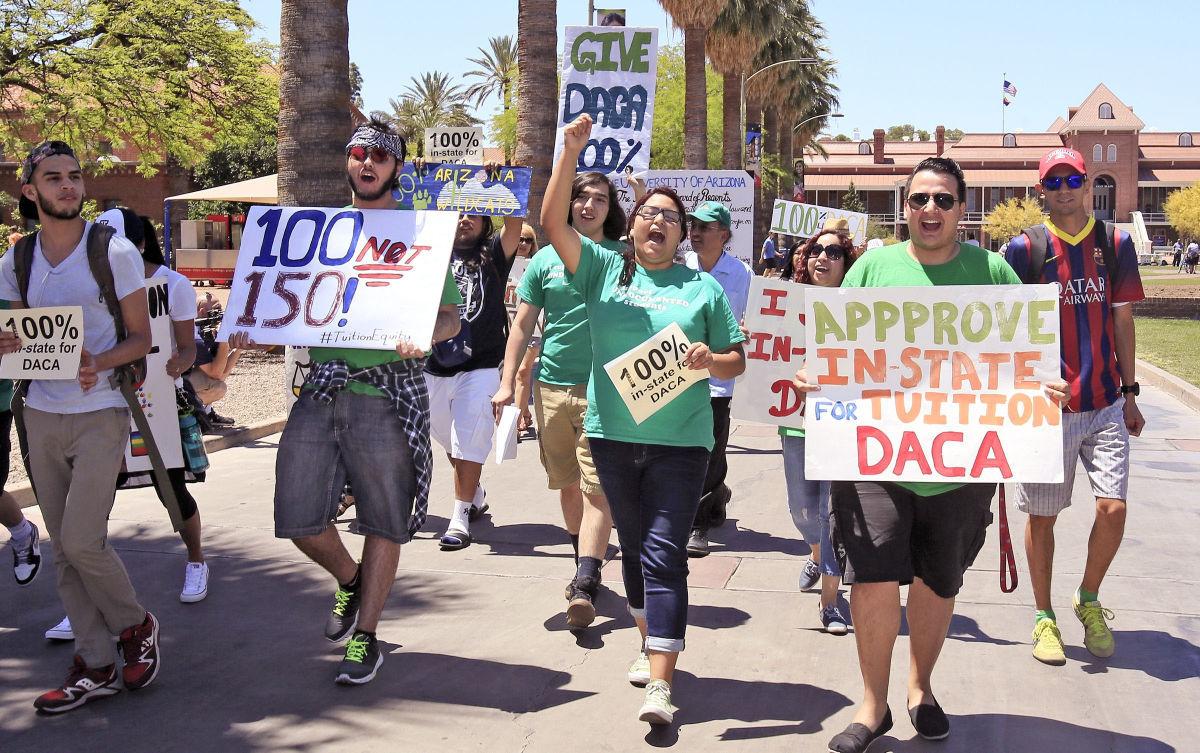 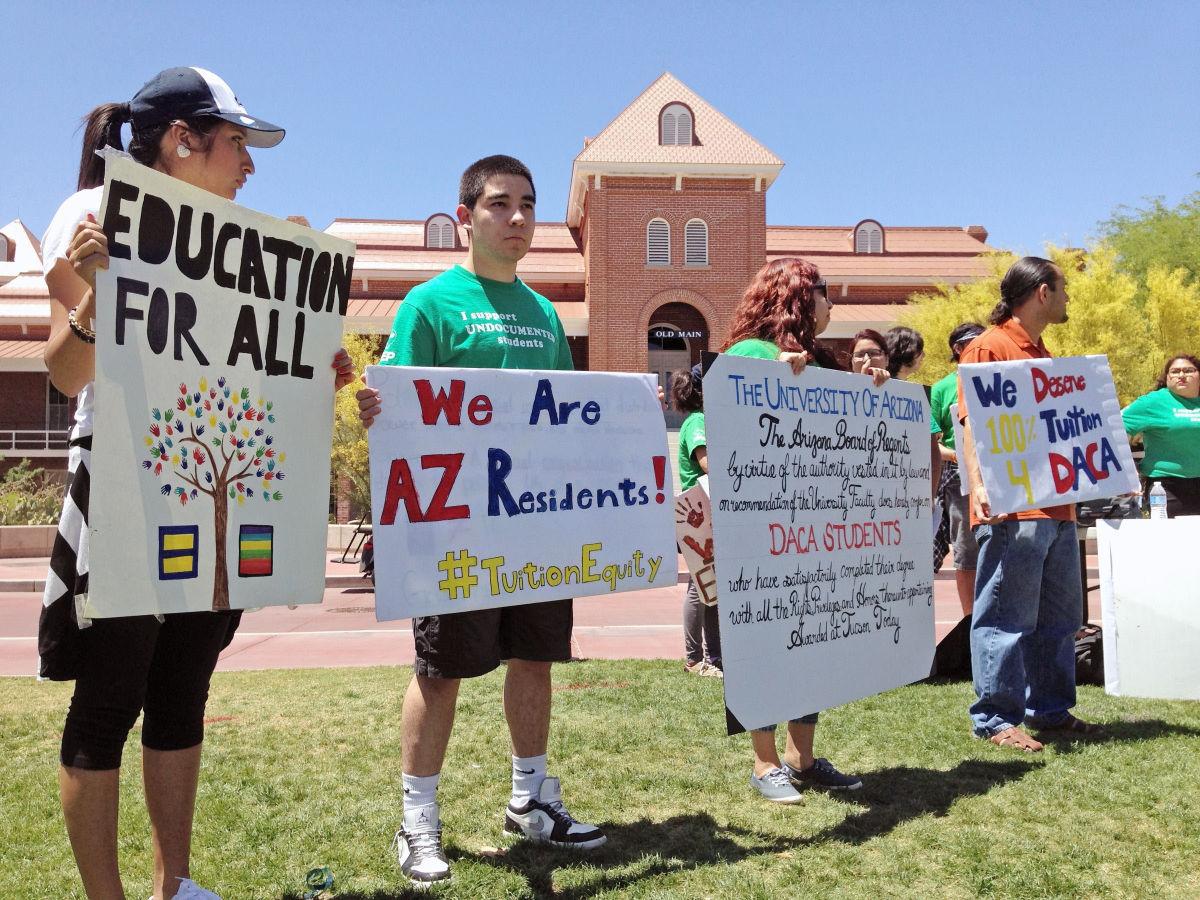 Members and supporters of Scholarships A-Z rallied in 2012 in support of allowing DACA students to pay in-state tuition.

PHOENIX — Insisting they’re not here legally, an attorney for the state asked the Court of Appeals late Wednesday to rule that “dreamers” are not eligible for the same lower tuition at colleges and universities charged to legal Arizona residents.

Assistant Attorney General Leslie Cooper acknowledged that the Obama administration, in creating the Deferred Action for Childhood Arrivals program in 2012, agreed to let those who qualify remain in the country without fear of deportation. DACA recipients also are entitled to hold employment.

But in her legal filings, Cooper pointed out that Arizonans approved Proposition 300 in 2006.

What the judges decide would most immediately affect the Maricopa Community College system.

The Attorney General’s Office sued the college in 2013 after it adopted a policy of allowing DACA recipients pay the lower tuition rate if they met all other residency requirements. That move saves eligible students seeking an associate’s degree $13,800.

But what the courts ultimately decide would affect Pima Community College, which also offers in-state tuition to DACA recipients. And it would affect decisions made in other counties.

Potentially more sweeping, a ruling in Cooper’s favor would wipe out the policy adopted by the Board of Regents earlier this year which also offers resident tuition to DACA recipients.

That change cut costs by more than half for such students. At the University of Arizona, for example, a DACA student this year who meets other residency requirements pays tuition of $11,403 instead of $32,630.

Central to the legal fight is what the 2006 voter-approved law actually means.

In a ruling earlier this year, Maricopa County Superior Court Judge Arthur Anderson rejected Cooper’s arguments that students accepted into the program are not “lawfully present” in the United States.

The judge ruled the federal Department of Homeland Security considers DACA recipients to be here legally, and issues them Employment Authorization Documents permitting them to work — documents Arizona law says are a form of permissible identification for certain benefits.

“The state cannot establish subcategories of ‘lawful presence,’ picking and choosing when it will consider DACA recipients lawfully present and when it will not,” Anderson wrote.

Cooper, however, said the judge got it wrong. She said there is no basis for any conclusion that DACA recipients, including close to 28,000 in Arizona at last count, are legally present in the United States.

“Deferred action is a discretionary determination not to take a specific prosecutorial action that does nothing more than temporarily defer deportation,” Cooper wrote.

She said DACA is simply a decision by the administration not to use its resources to go after and deport those in a particular category. And Cooper said it “cannot change an individual’s immigration status.”

Cooper told the appellate judges that’s not just her opinion.

“The Department of Justice Office of Legal Counsel issued an opinion explaining that those eligible for relief under DACA obtain nothing more than relief from deportation,” she said.

One issue Cooper faces is that U.S. Citizenship and Immigration Services has said it considers DACA recipients “to be lawfully present during the period deferred action is in effect.”

But she told the court that neither the agency nor federal immigration law defines “lawful presence.” So she argued that, in context, all it means is that they can remain in the country without fear of deportation for a fixed period, subject to revocation.

“But that decision does not change that alien’s status,” Cooper said.

And she specifically attacked Anderson’s finding that the Employment Authorization Documents given to DACA recipients shows the government considers them to be here lawfully.

Cooper said those who get EADs receive Social Security numbers and pay taxes on their earnings. And she argued that issuance of those documents “furthers the federal government’s purpose of ensuring that aliens support themselves, pay taxes, and avoiding burdening the public.”

And Cooper also pointed out that immigration services say that being accepted into the DACA program does not make anyone eligible for other benefits.

Cooper has a backup argument if the appellate judges don’t buy her argument that the 2006 state law precludes DACA recipients from getting in-state status.

She said two federal laws enacted in 1996 limit a state’s ability to grant many benefits to those not here lawfully. And Cooper argued that includes providing in-state tuition.

The federal law does allow states to make some benefits available by enacting specific legislation.

“Arizona has not passed any such law,” she wrote. “In fact … in passing Proposition 300, Arizona voters to the opposite tack, denying eligibility for several education-related benefits to those without lawful status.”

And Arizona students are showing up to college more prepared.

Separately, the U.S. Supreme Court separately agreed to reconsider whether a federal judge in Texas acted correctly in another challenge.

“Does it come down to racism?” he asks Arizona assistant attorney general.

Members of Scholarships A-Z and supporters marched around the west end of the UA Mall.

Members and supporters of Scholarships A-Z rallied in 2012 in support of allowing DACA students to pay in-state tuition.