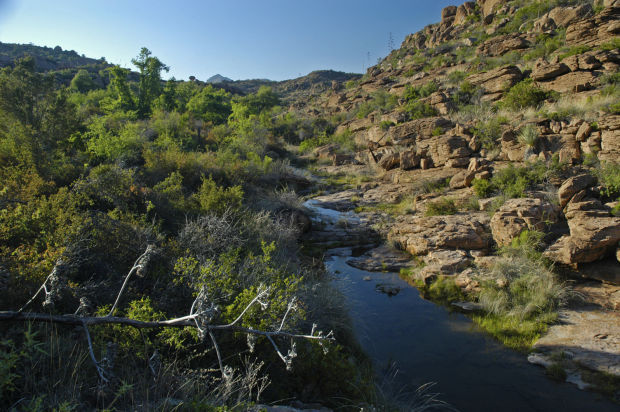 Pools form in a side canyon off Gaan Canyon, where the San Carlos Apache Tribe says its spiritual beings reside. 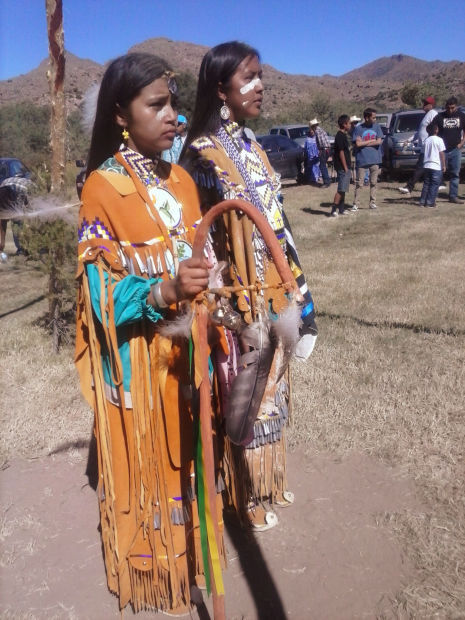 Two girls take part in the San Carlos Apache Tribe’s sunrise ceremony at Oak Flat near Superior, a site that is threatened by a planned mine.

For more than two weeks, protesters have made camp at Oak Flat, the site of a planned copper mine that will result in a massive crater on the sacred site’s surface.

“We’re not moving,” said Wendsler Nosie, a former chairman of the San Carlos Apache Tribe and a vocal opponent of the mine. He is the organizer of the protest, which he describes as “Occupy Oak Flat.”

Nosie and other mine opponents want a repeal of the legislation that turned over 2,400 acres of Tonto National Forest to a mining giant, before conducting environmental studies and having formal consultations with concerned tribal governments.

“We can work with the United States to fix this,” he said in a phone interview. “If the United States fails and becomes defensive, then I have no control. There’s going to be a lot of tribes here coming from all over the country.”

Music, food and religious ceremonies have accompanied the encampment, where about a dozen die-hards are living full time. Hundreds of others have attended weekend events organized by the protesters, including non-tribal members from Tucson, Phoenix and the surrounding area, Nosie said.

Tucson resident Dwight Metzger recently founded a grass-roots group called “Tucson Supports Oak Flat” and has been organizing regular car pools to get dozens of Tucson residents up to Oak Flat, known as Chich’il Bildagoteel to the Apaches.

“We intend to support the camp as long as it’s there,” he said. “If it takes confrontation or more to stop the mining, we’ll be there right alongside them.”

Resolution Copper officials declined this week to discuss the protest, but they have said that tribal members are guaranteed access to Oak Flat until mining makes the site too dangerous. That will likely allow for another decade of access to the site.

Nosie and other tribal leaders met with Tonto National Forest supervisor Neil Bosworth recently at Oak Flat, and they say he was sympathetic to their concerns. Nosie said they got assurances they won’t be forced to leave — at least for a couple of weeks. Typical park rules limit camping to 14 days.

Bosworth wasn’t available to discuss the meeting, said Carrie Templin, spokeswoman for the Tonto National Forest. But she said the Forest Service — out of respect for the protesters’ religious rights — is seeking an exemption that would allow the camp to stay for a total of four weeks.

Bosworth is “very interested in continuing to talk to and work with the tribe and tribal members on their concerns,” she said.

But she doesn’t know if the Forest Service even has the ability to comply with the protesters’ demands that Oak Flat be protected in perpetuity.

“That (land-swap) law is law. We are required as employees of the federal government to implement laws as enacted by Congress,” she said. “We will do our best to see if there is any way something will evolve.”

Protesters say they are braced for things to turn ugly if Forest Service officials decide the campers must leave. Organizers say they will not do so and will reach out to allies in Tucson and Phoenix if they face removal. They say they are in touch with dozens of other tribes that are backing the protest effort.

Tribes including the Tohono O’odham Nation and the Pascua Yaqui Tribe, as well as the National Congress of American Indians and the Inter-Tribal Council of Arizona, have stated their opposition to the mine and the privatization of land considered sacred to the Apache and Yavapai tribes.

Under the land-swap legislation, the title to the 2,400-acre parcel will be transferred to Resolution Copper — a subsidiary of mining giants BHP Billiton Ltd., based in Australia, and Rio Tinto Group, based in the U.K. — 60 days after the environmental impact statement is published.

Resolution officials have said they want to work with the tribes to address their concerns, but the tribes say consultations after the land is already destined for privatization is meaningless.

Resolution Copper Mining wants to build a massive copper mine on public land east of Superior, which is about 100 miles north of Tucson.

The exchange trades 5,300 acres of land owned by Resolution for 2,400 acres of copper-rich land in the Tonto National Forest. The copper mine is expected to be the largest in North America, generating $61 billion over its lifetime and 1,400 direct jobs. The mining company has promised to put as many of those jobs as possible in and near Superior.

But residents there are divided over whether the town will see enough financial benefit to justify the destruction of a popular recreation area and spiritually significant site to their east. Opponents say the mining company has offered few financial guarantees, and job projections have varied wildly over the past decade.

More than a dozen versions of the embattled land-swap bill failed to pass Congress since it was first introduced in 2005. But in December, legislators including Sen. John McCain, R-Ariz., and Sen. Jeff Flake, R-Ariz., attached the bill to the must-pass National Defense Authorization Act.

As part of the defense bill, the land swap passed Congress and was signed into law in mid-December, prompting Secretary of the Interior Sally Jewell to issue a statement decrying the lack of consultation with Native American tribes before trading their sacred land.

Mine opponents, who have protested outside McCain and Flake’s Arizona offices in recent weeks, sent a letter to Flake last week asking him to work with the Forest Service to protect Oak Flat.

A Flake spokesman said he was not available for comment. But Flake said in a prepared statement, “This bipartisan measure, which is now law, will enable responsible development and economic benefits, including provisions for tribal consultation, environmental reviews, and post-exchange access to Oak Flat Campground. I look forward to continuing to work with all stakeholders as the Forest Service implements the land exchange.”

Forest Service's concerns about the mine

The Forest Service has been sympathetic to the tribes' concerns. In 2009, Tom Vilsack, secretary of the U.S. Department of Agriculture, which includes the Forest Service, argued the land-swap should not occur until after environmental impact studies are completed, including consultation with tribes.

"Tribal governments have also raised important concerns that the bill is contrary to various policies and executive orders that require federal land managing agencies to protect and preserve sites that are sacred to Native Americans," he wrote in a letter to Sen. Ron Wyden, then-chairman of the Subcommittee on Public Lands and Forests.

"Because this specific site has been the focus of historic government protection it is important that this bill engage in the process of formal tribal consultation to ensure both tribal participation and the protection of this site."

The land traded to Resolution Copper includes the 760-acre Oak Flat Withdrawal Area, which was deemed off-limits to future mining by a 1955 land order signed by President Dwight Eisenhower. The land-swap legislation overturned that order.

"Oak Flat is where the creator, God, touched the earth for us. These are our ancestral home places," said Wendsler Nosie, former chairman of the tribe. The Apache collect medicinal plants and acorns there, and conduct coming-of-age ceremonies, Nosie said.

The mining company has acknowledged that Oak Flat will be damaged by the mine. Resolution Copper estimates a two-mile wide, 1,000-foot deep crater will form at Oak Flat due to the mining.

The moon's phases may be affecting mankind's sleep

A video of Arizona Sen. John McCain being chased by protesters on the Navajo Nation is trending on social media.

$2M to destroy historical smelter or $12M to preserve it?

Pools form in a side canyon off Gaan Canyon, where the San Carlos Apache Tribe says its spiritual beings reside.

Two girls take part in the San Carlos Apache Tribe’s sunrise ceremony at Oak Flat near Superior, a site that is threatened by a planned mine.