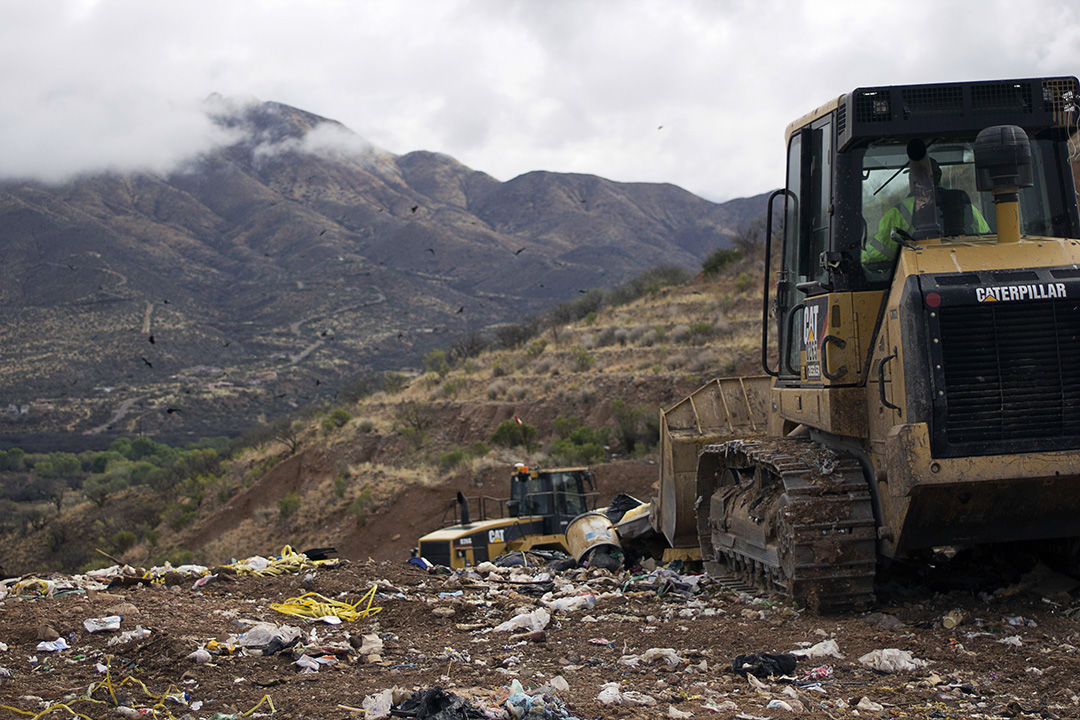 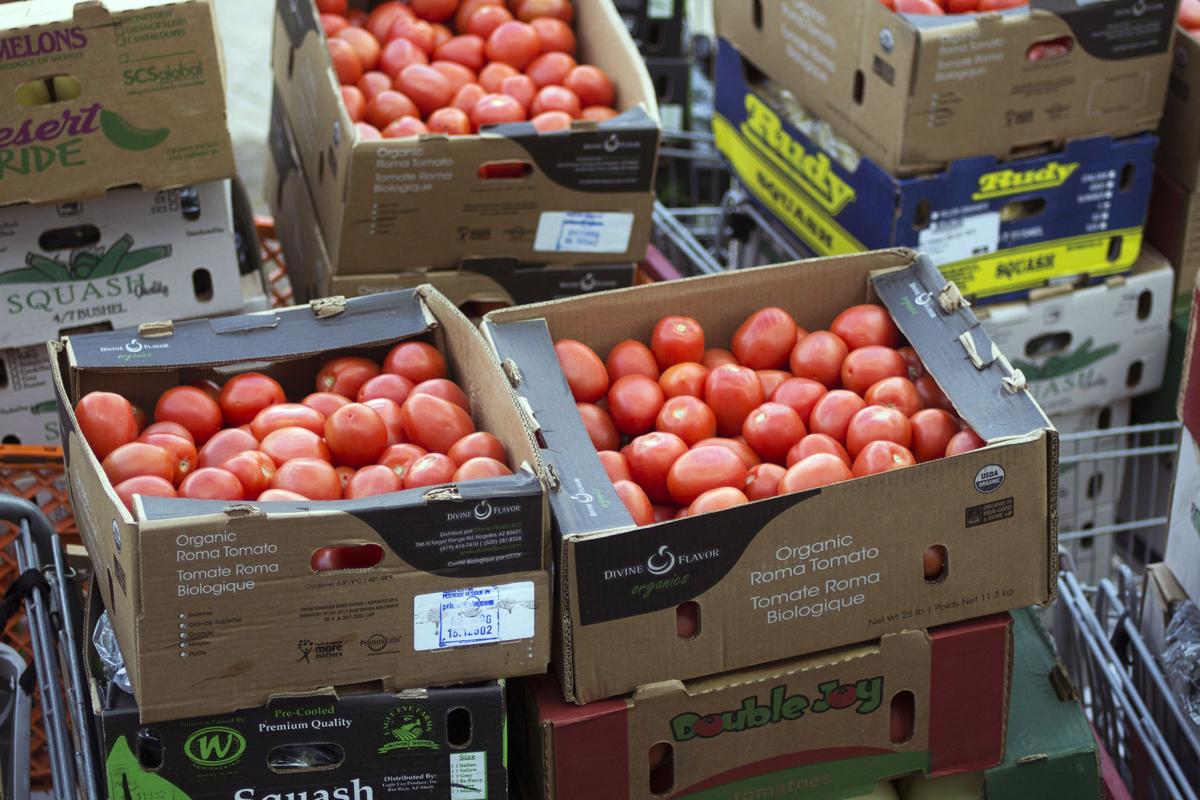 Boxes of tomatoes sit outside of the Borderlands Food Bank warehouse in Nogales, Arizona before they are loaded into a car and taken for distribution on March 7, 2016. (Photo by Tobey Schmidt / Arizona Sonora News)

NOGALES, Arizona — Farmers from Mexico bring nearly 20 million pounds of produce across the border into this once-bustling border town each year, according to statistics by U.S. Department of Agriculture in 2014. From there, they sell it to distribution companies, who then sell it to grocery stores.

The problem happens, though, when the food is not sold. It can languish in Nogales, headed for landfills.

“If the product look bad, we dump them,” said Fernando Rodriguez, who works in sales at Franks Distribution in Nogales, one of the hundreds of warehouses stringing along the highway from Nogales to Tucson, 70 miles away.

“If I know the product is consumable, we donate them,” he added.

That “unwanted” produce provides a lifeline for many outlets that deal with hunger in Southern Arizona.

For example, more than 200 food-distribution companies throughout Southern Arizona send unwanted produce to the Borderlands Food Bank in Nogales. That accounts for approximately 25 to 40 million pounds of food that otherwise would be dumped into landfills each year.

Grocery stores don’t always buy the produce that crosses the border from farms in Mexico. Sometimes there is no market for a particular fruit or vegetable, or the market is too high or too low. Sometimes the product is too small or too big.

Depending on consumer demand for any particular product at any time, grocery stores choose to buy — or deny. When they don’t buy the produce, the distribution companies have few options. They can either take it to a landfill (at a cost to them) — or find a way to get it into a donation distribution network like Borderlands Food Bank.

In 2014, the United States Department of Agriculture reported that between 30 to 40 percent of the American food supply is wasted.

Most happens at the distributional level — like when it can’t be sold to grocery stores.

“A lot of food waste is happening in the transit process,” said Michaela Webb, a University of Arizona student and worker for the Compost Cats, a student group that collects food waste and scraps from the city of Tucson, composts it and turns it into soil. “If they look at a semi-truck and deem that more than 10 percent of the food will be bad before the time it reaches its destination, they throw the whole of the truck — all the contents— away.”

The Borderlands Food Bank works with the distribution companies at its warehouse in Nogales to take the produce and give it to people who need it. The food bank has set up a program throughout Southern Arizona, Tucson and Phoenix, called Produce on Wheels — With Out Waste. (P.O.W. W.O.W.). It’s like a farmers market that runs on donations. Anyone can come and contribute $10 to shop for up to 60 pounds of produce.

Yolanda Soto, the chief executive officer and president of Borderlands Food Bank, said on Friday that progress has been made in coping with food waste.

“For us it really went down because we were able to distribute a lot of it through the P.O.W. W.O.W program and the majority that we were not able to, that perished, went to animal feed this year.”

Leftovers are given to registered ranchers who come and pick it up, or the food bank will even drop it off for them.

However, the Borderlands Food Bank is just one organization with a 13,000-square-foot warehouse in Nogales (it also has the advantage of being able to use prison inmates as more than half of its workforce). Its scope is big, but the needs are bigger.

“There have been years where there has been too much,” said Yolanda Soto, chief executive officer and president of the Borderlands Food Bank. Soto explained that when they don’t have enough room to take the produce, the distribution companies are forced to throw it into landfills.

PHOENIX (AP) — Phoenix police have identified a man and a woman dead in what investigators believe was a murder suicide.

MESA, Ariz. (AP) — Police in Mesa say they are investigating a shooting at a sports bar that has left one man dead and another wounded.

PHOENIX (AP) — An Arizona lawmaker say he’s thankful nobody was injured after a robbery at a grocery store that his family owns in Coolidge.

Ducey and Republican lawmakers had been seeking to add the ban into the state constitution.

Phoenix woman pleads guilty to contracting without a license

PHOENIX (AP) — Authorities say a Phoenix woman has pleaded guilty to contracting without a license.

Phoenix man gets life in prison for killing wife, daughters

PHOENIX (AP) — A Phoenix man charged with killing his wife, two of his daughters and a family friend last year has been sentenced to life in prison.

The six bedroom, eight bathroom home in Paradise Valley was where the Duceys raised their three sons.

Marine Corps search and rescue squadron in Yuma to disband

Boxes of tomatoes sit outside of the Borderlands Food Bank warehouse in Nogales, Arizona before they are loaded into a car and taken for distribution on March 7, 2016. (Photo by Tobey Schmidt / Arizona Sonora News)